So with Christmas now just over a week away (OMG How did that happen?!?!), there is pretty much no DIY going on in this house at all – it’s all systems go to get stuff bought, wrapped and organised plus the obligatory mince-pie making, carol listening/singing along, Glühwein-drinking, chocolate-scoffing and Elf-watching.  Hey, priorities, people, priorities!!

Annnnywayyyy, as I completed my decorating I figured I would share a few more bits of my home that have been all dolled up festive-like.  You’ve seen the mantle in the dining room already and the Christmas tree and living room decor so you’ll see the cerise pink and gold theme continued to the barcart and the console. 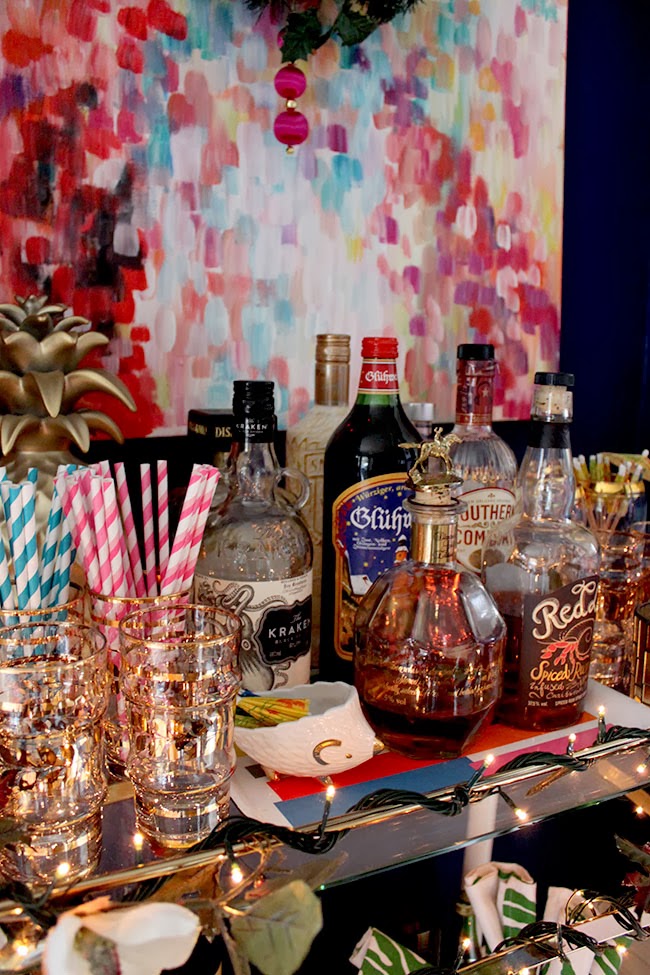 The barcart got wrapped up with some twinkling lights (although I really need better fairy lights for this, I didn’t really want to spend even more money so I made do with some leftover tree ones) and a magnolia garland and the painting above got dressed up with a hanging wreath. 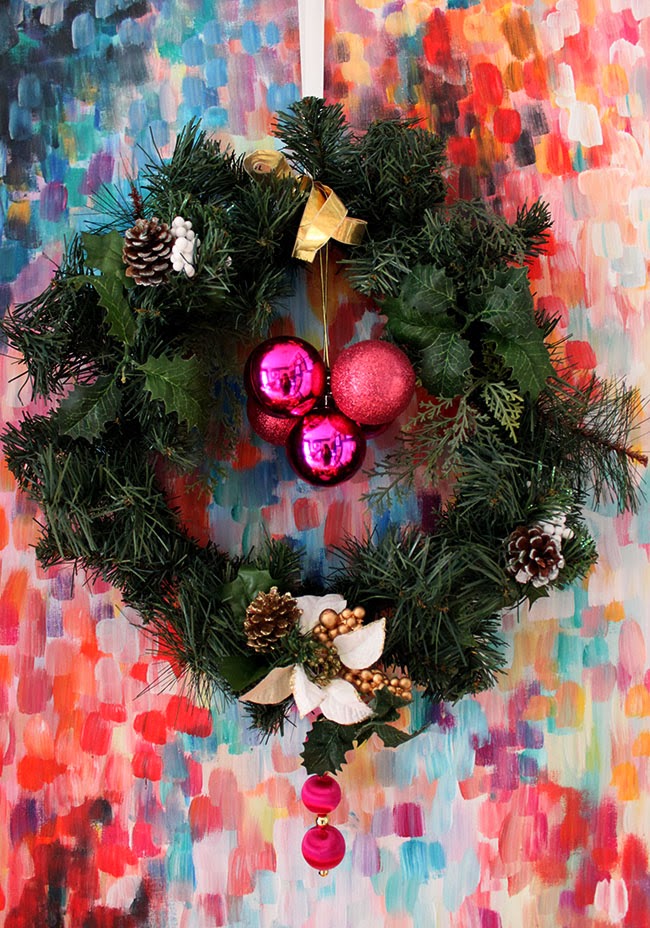 There was also a gold starburst hung from the ceiling above it. 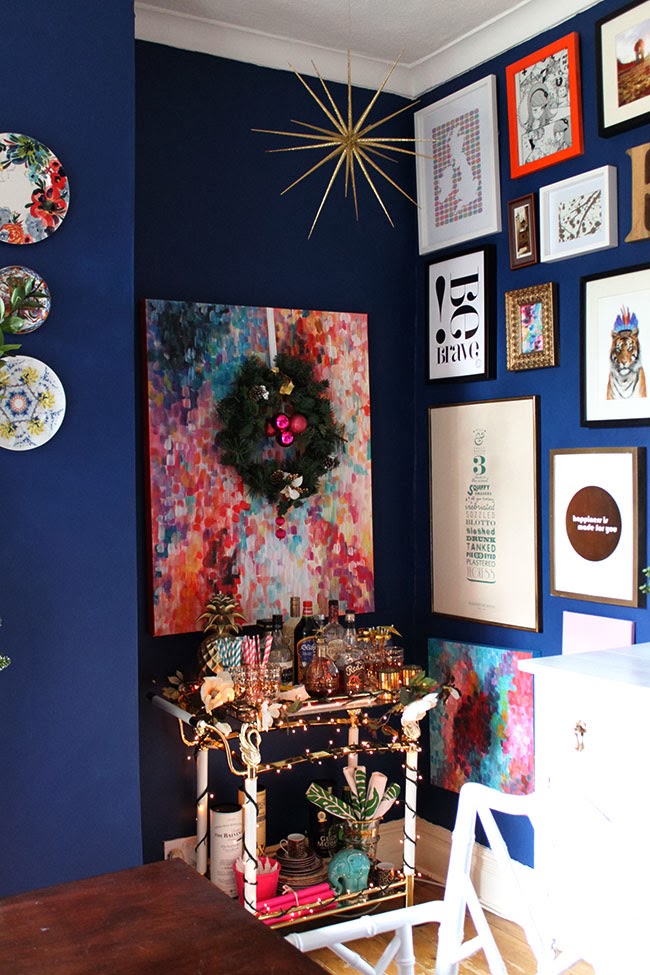 On the console table, I decided to continue the sort of ‘entertaining’ vibe and dressed it up nearly like a second ‘bar area’.  Well, there IS a lot of merry drinking this time of year so I figured I might as well just run with it. 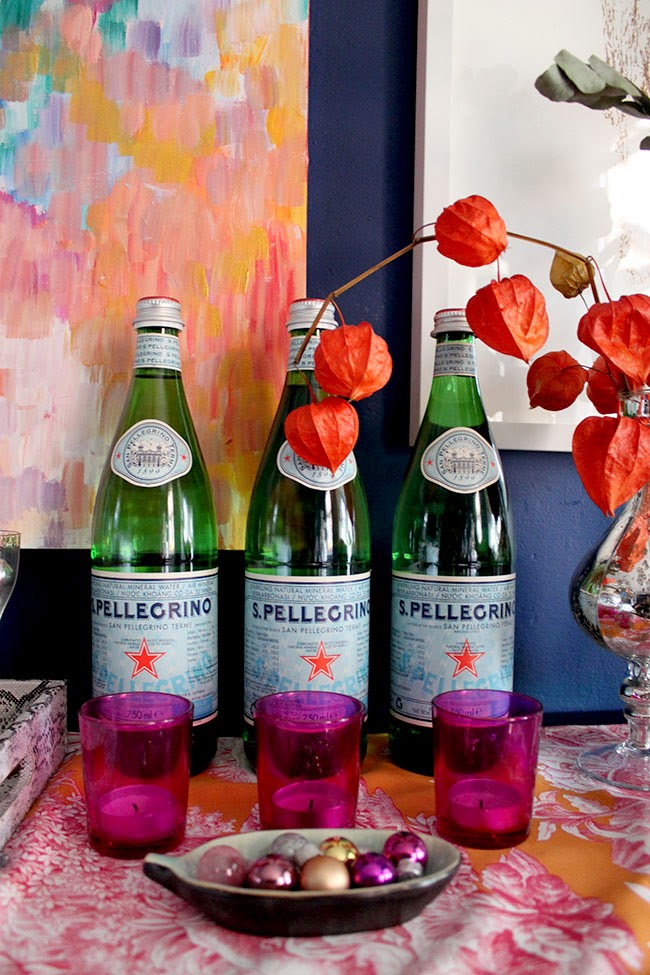 The mini glass baubles were purchased from Paperchase last year (you can still get them here) and so it was easy to coordinate with the colours.  I also dressed the top with one of the runners I’d made from the left over chair fabric. 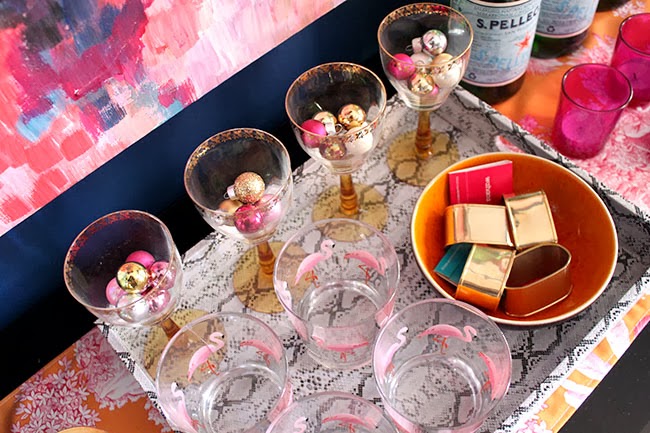 I was sent the two mercury glass vases from Matalan for review.  The website shows the colour as gold but I would say they are really more silvered glass than gold.  However, that doesn’t diminish from their look – they feel and look gorgeous and I loved the sparkly touch they added to the table.  The eucalyptus and chinese lanterns dried quite nicely (more out of neglect than anything I actually did) so I used those to dress them. 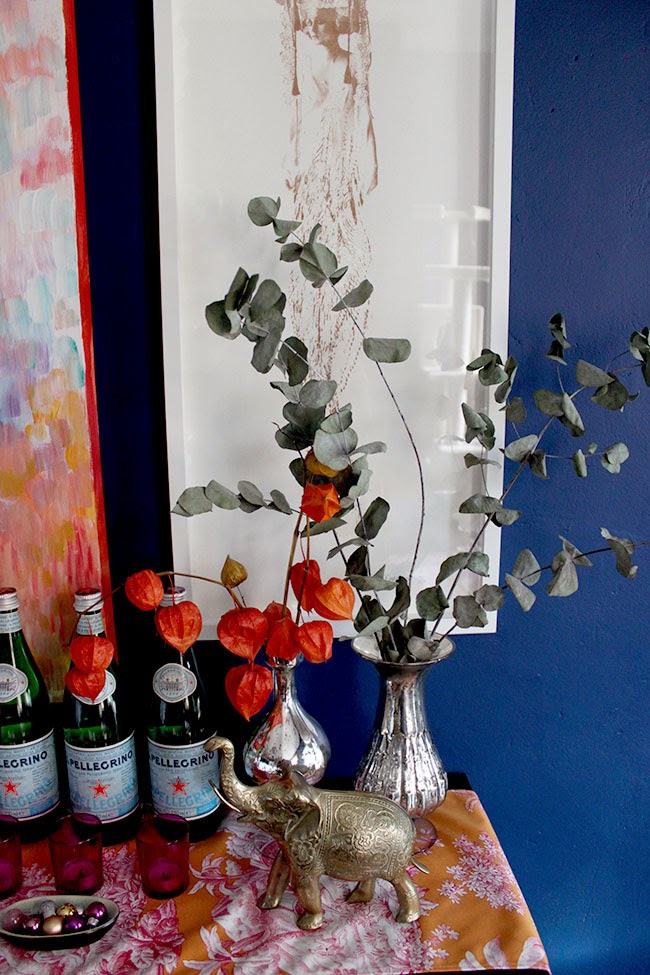 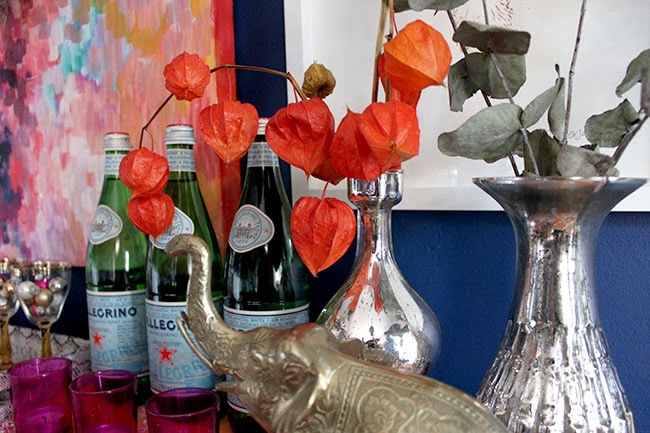 Another wreath hangs in front of the painting here too… 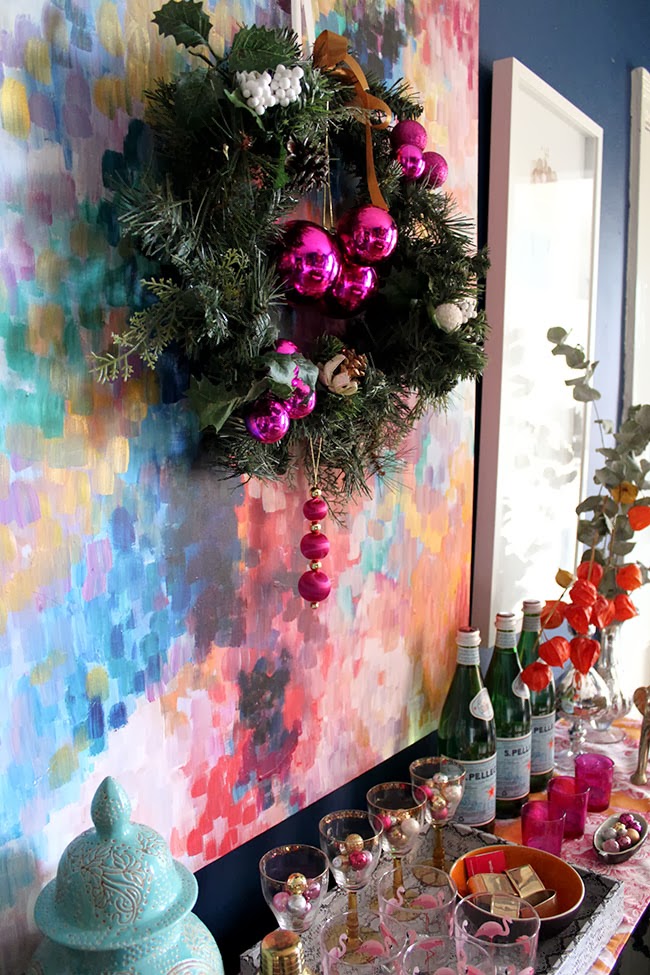 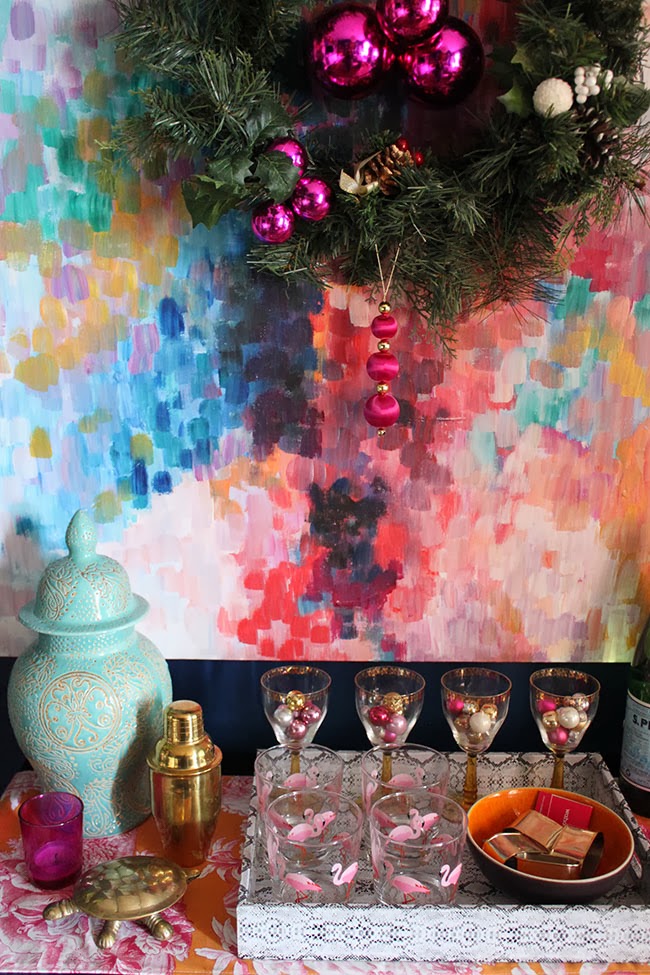 Again, it’s certainly not a traditional look but then, I don’t think my decorating style has ever been particularly traditional! ;) 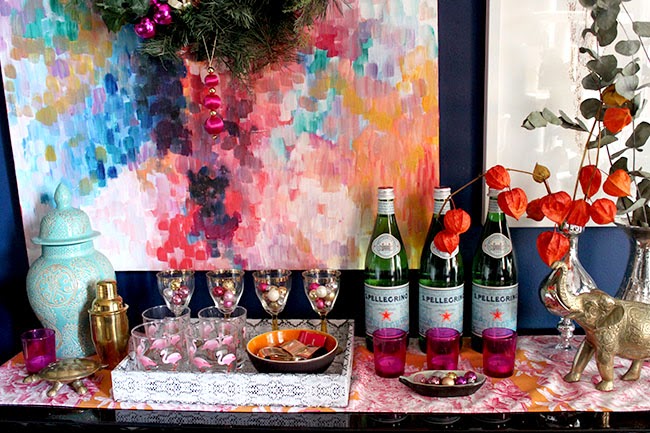 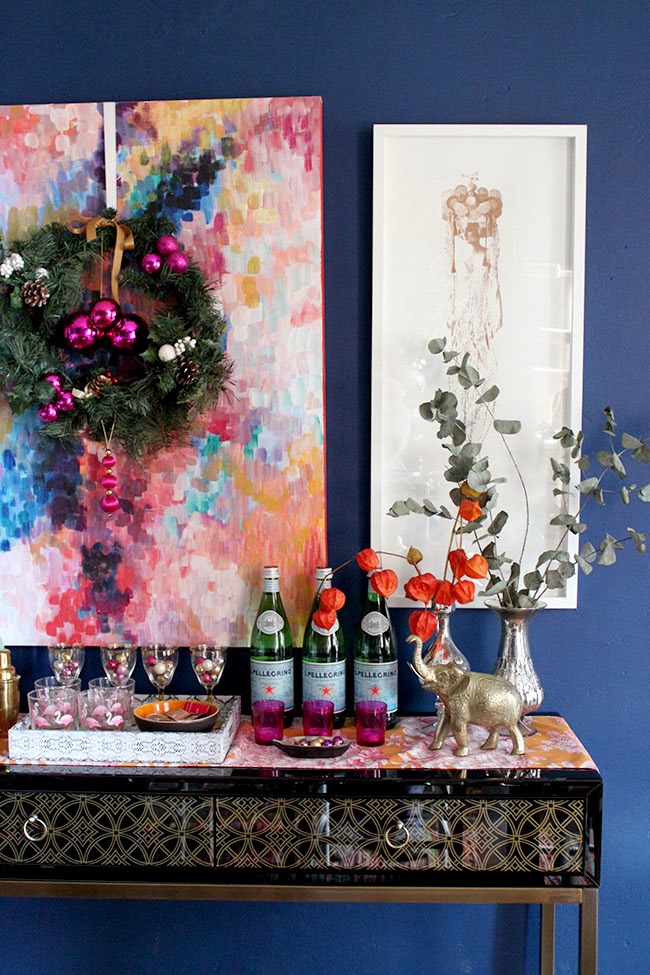 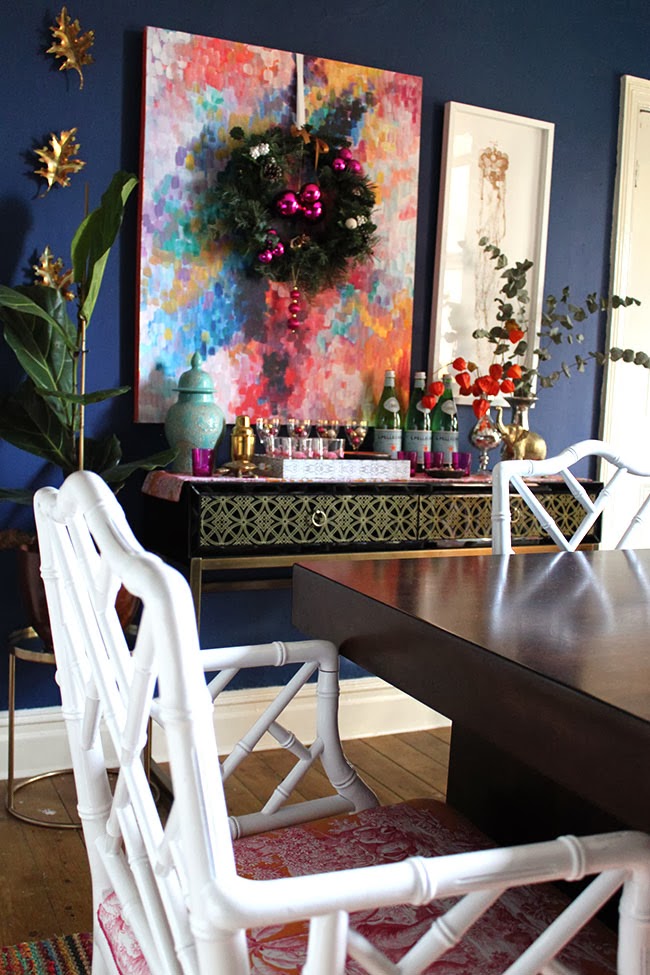 Now I’m hoping to share my Christmas table next but I got knocked down this weekend with a rather vicious stomach virus – rubbish timing with as busy as things are right now so I’ve sort of fallen behind everything.

Ending a blog post telling you about a stomach virus seems to be a bit of a downer so instead I’ll end my blog post with this. 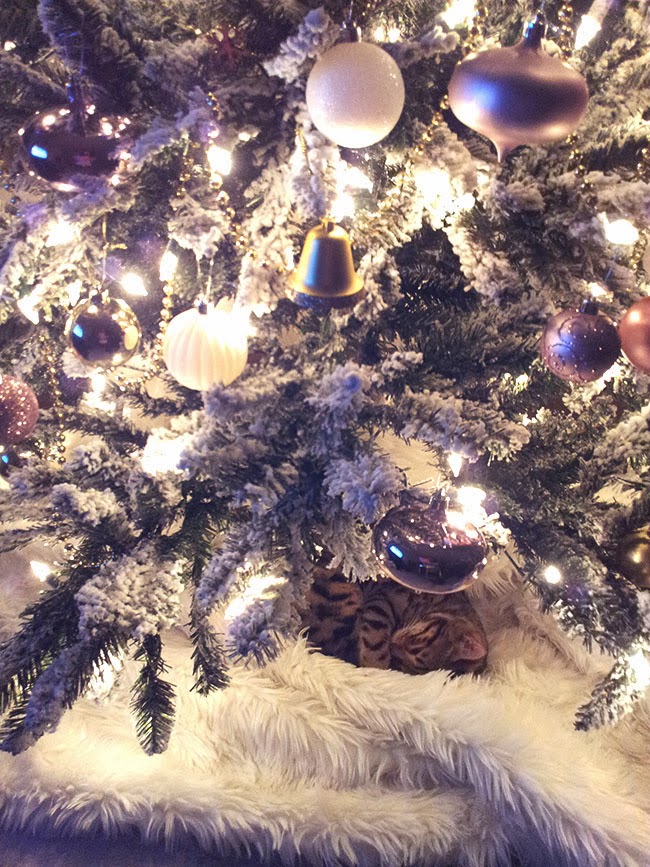 While I received the mercury vases free for my review from Matalan,  all opinions, images and general rambling are as always my own.