First up, did you notice the little change in my header?  I decided to swap out the paint splatter to different things depending upon season/mood and in this case, a fallen autumn leaf.  Like my home, nothing stays the same around here for very long… ;)

Anyway, by the title of this post, you’ve probably figured out that I decided what to do with that big blank wall in my living room!  It’s been an issue for me since we moved in. 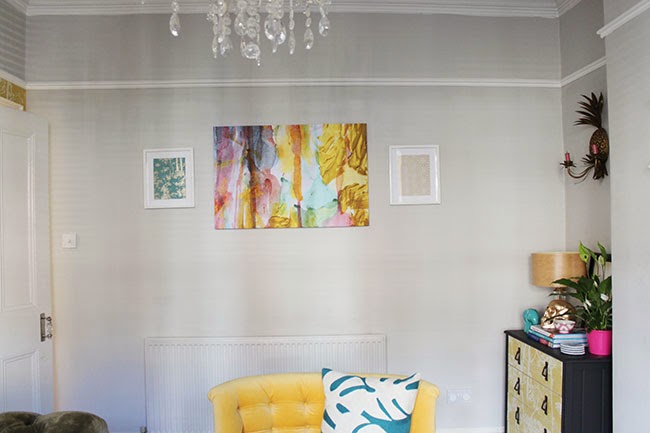 The worst part is I actually thought it looked just about acceptable in person but when I look at it in pictures, it looks freaking terrible. 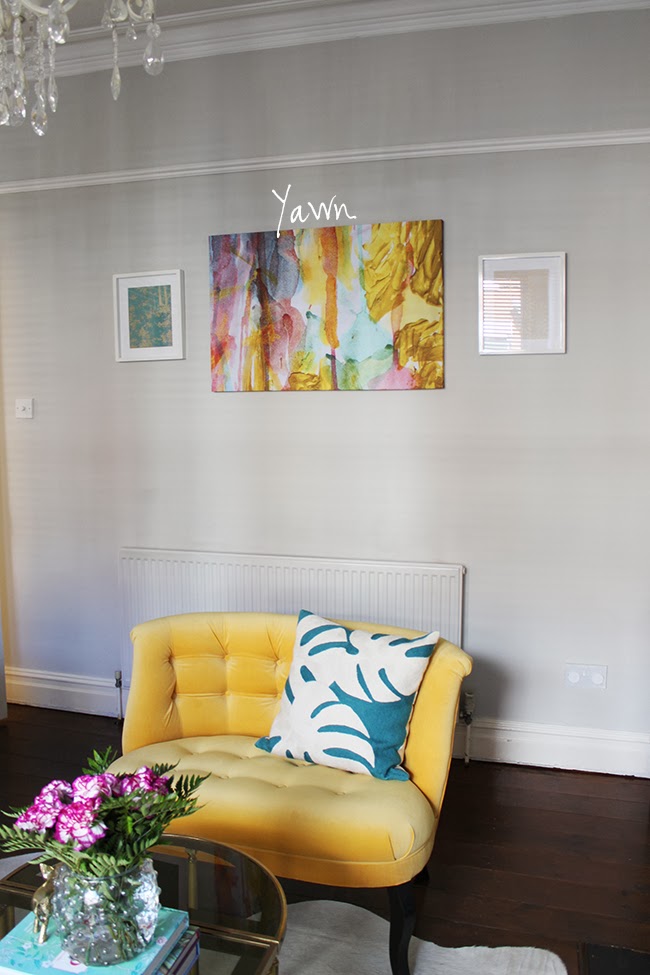 The art there has always been in my mind a temporary solution but this ‘temporary’ has turned into 3 years now and it’s time something is done about it.  I’ve considered quite a few different things and quite a few of you lovely peeps suggested some ideas (thank you for that – and if I don’t take your suggestions, please don’t feel slighted, I do give careful consideration to every single one to see if it’s right for me).  Aside from the television situation and this wall, I’m actually pretty pleased with how the room has shaped up so far.

If I had the space and if the radiator wasn’t situated there (which is entirely needed, this room gets COLD in the winter), I’d put a piece of furniture here.  But with the door into the room to the left and the little yellow sofa sitting just over 2 feet from that wall, I just don’t have the space for it.  So I considered some kind of shelving idea with art leaning up against it… but that would mean collecting even more art of which I feel I have a LOT of already… and I guess I just wanted to do something different.

And so when Abigail suggested wallpapering this wall, I was intrigued.  However, I already have a full feature wall in Cole & Son’s Cow Parsley so I thought it might be a bit too much to do another feature wall… But through that idea, came another – wallpaper panels.

It’s certainly not a new idea but I do think it gives a room interest and it would fill that wall rather nicely.  It also gives big impact for not a huge amount of money.  As you know, I’m all about saving some pennies where I can and while Hollie made a great suggestion of 3 large mirrors to maximise light (and you can see how I took on that idea with using 3 panels), the cost would have been prohibitive considering the size I would require.  Using 2 or 3 large pieces of art would have been even more expensive.  Even wallpapering the entire wall would take probably around 3 rolls but I could feasibly use a more expensive paper because I’d likely only need one roll.  Wood trim from the local DIY shop wouldn’t cost much either.  So we’re looking at a pretty good budget solution here.

I used frog tape to outline the rough sizes and to give me an idea of how it might look in the room. 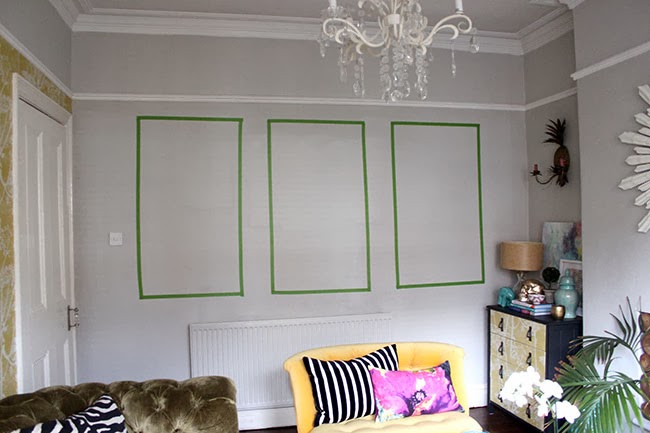 It’s funny that even just putting the tape up there immediately made that wall seem a lot larger than it did before.  And the radiator (which annoyingly, isn’t even centered on the wall! Who are these builders who do things like this?!) seems less of an eye sore.* 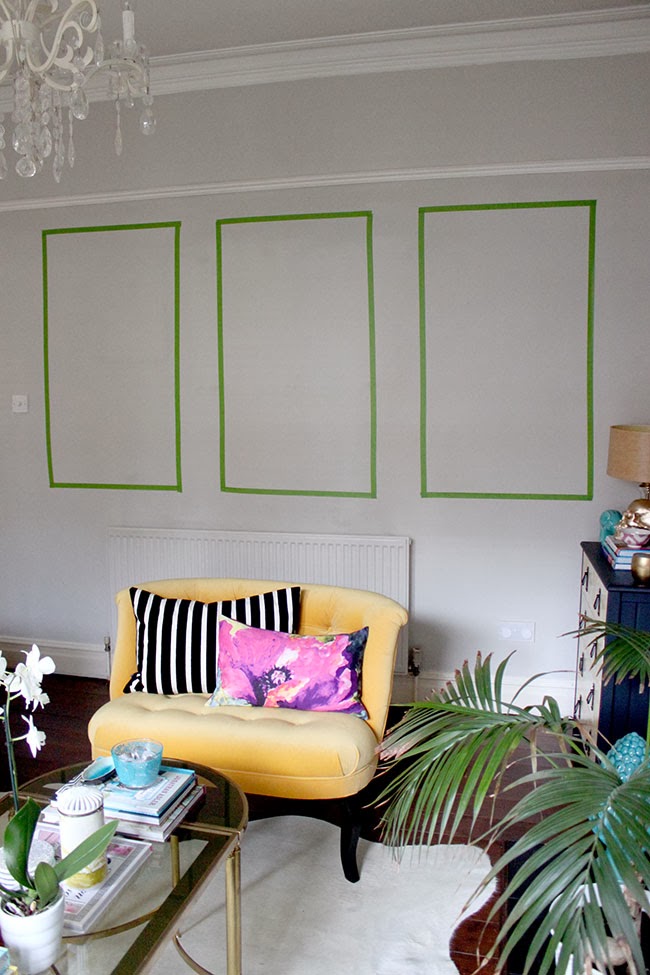 I also think the trim painted to match the picture rail and cornicing would look rather regal in the space and I want to finally get a ceiling rose for the chandelier.  Oooh this room is going to look so posh! 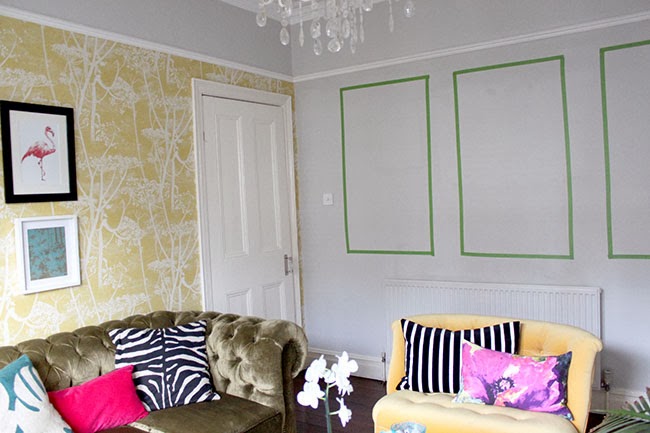 Oh and excuse the plant in front of the ‘fire place’ – it’s not normally in there but Meisha keeps attacking it so I’ve moved it in here just to get it away from her for the time being!  Apologies for the grainy pictures as well – we’ve had nothing but rain and cloud here the last couple of weeks. 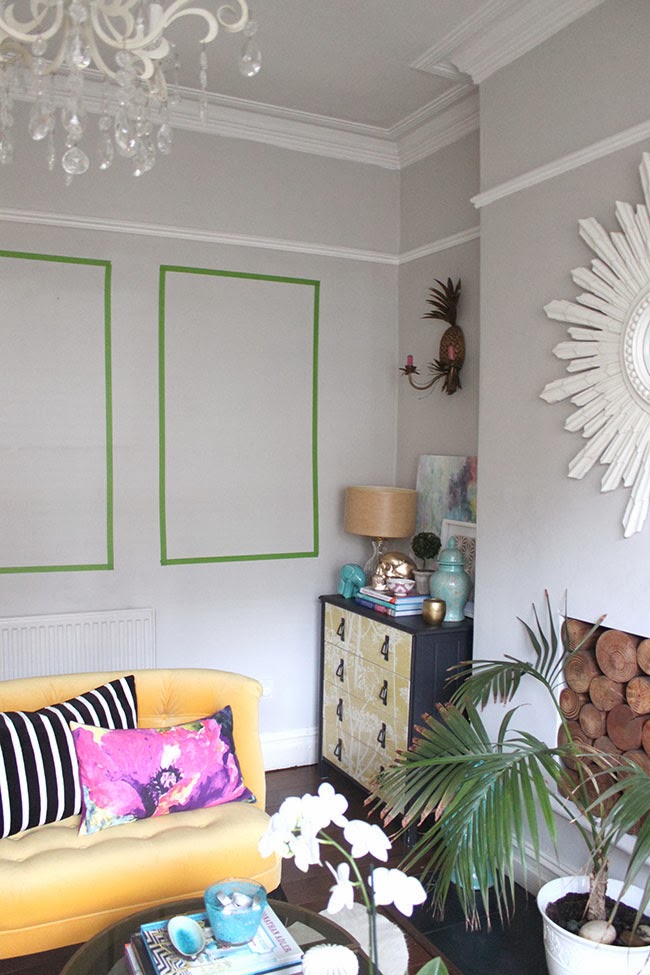 Now comes the fun part of choosing a wallpaper!  I need something that will play nicely with the mellow yellow of my Cole & Sons Cow Parsley.  I’m waiting on a few samples of wallpaper in the post at the moment but no decision has been made as yet.

Clearly, from my inspiration photos, I’m leaning towards a Chinoiserie pattern.  As much as I would love to have custom Chinese panels, I can’t find anywhere that does them fairly inexpensively in the UK and that pulls in the colours in this room (which, admittedly, is a bit of a strange mix – maize yellow, olive green, pale greeny-turquoise, cerise and pale pink) so I’m leaving myself pretty open to options. 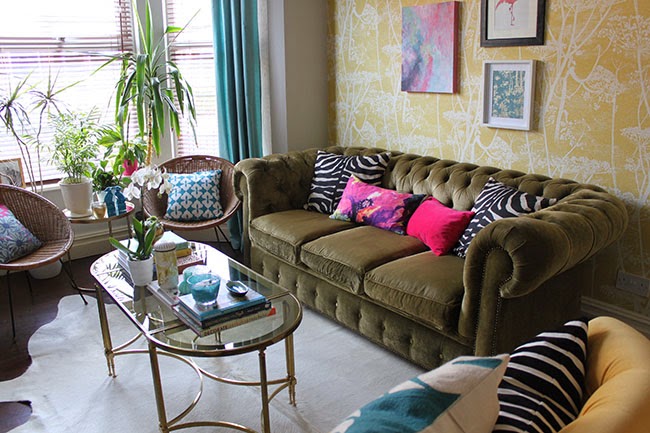 So the hunt is on for wallpaper to compliment the scheme.  I have a few ideas up my sleeve which I’ll be sharing with you soon once I can narrow down my choices.  In the meantime, do you have any suggestions of wallpaper you feel might work with the space?  What do you think of the wallpaper panel idea?

**After a brief chat on Twitter with Vicky of Bride & Chic, I’m now considering a radiator cover that’s slightly extended  on one side to make the radiator appear to be centered on the wall.  It’ll add a decorative touch to the room and cover that ugly eyesore of a radiator.  Oooh I love little moments of genius that happen on Twitter.