Seasonal Refresh in the Dressing Room

I’m not sure how it’s happened but we’re in November, people.  And the countdown to Christmas has started.  I’m pinning all sorts of Christmassy things, I’m planning my gifts, my decor, my table.  How has this year gone by so quickly?  I know they say as you get older, that time seems to go more quickly but I’m sure every year flies by faster than the one before.

It does seem that as each season passes, I feel the need to give my rooms a little bit of a change up.  It keeps me from wanting to start from scratch for the sake of a new project (lord knows I have enough of those going on to keep me busy) and it doesn’t cost me anything because all I’m really doing is moving things around.  Wayne calls it ‘faffing’, I call it ‘creative decorating’.  We’ll agree to disagree on that one. 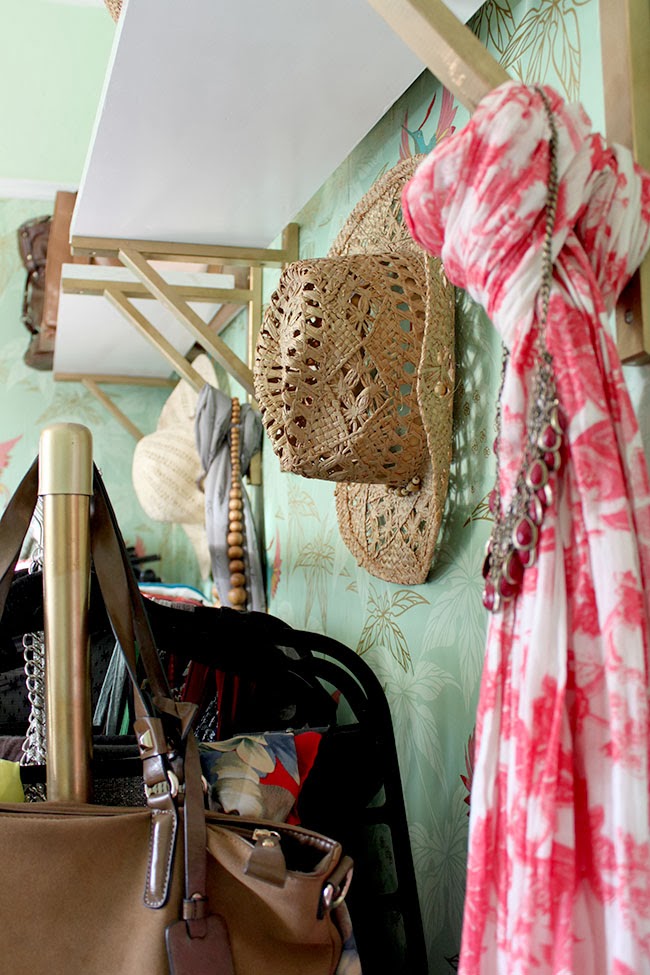 Anyway, I was doing my little seasonal switcheroo in my dressing room and I realised there was a few bits I’d not shared with you so I thought I’d do that today.  As you can see from the picture above, I have finally styled/used the shelving above the clothing rail (they were dead cheap to make, you can see the post about them here).  There was ‘dead space’ under the shelving so I just put a few little nail pins underneath and hung my straw hats on them. 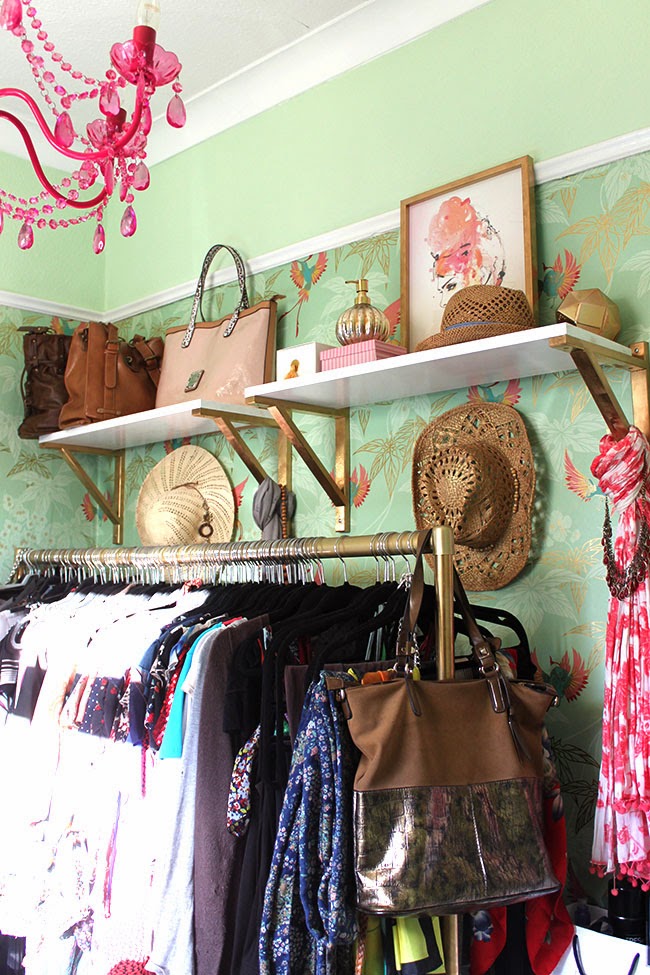 The left shelf holds some of my larger bags that don’t fit on the Billy bookshelves on the opposite side of the room and the right is less practical, more pretty with my Leigh Viner print.  Gotta have a bit of give and take in a room this size. 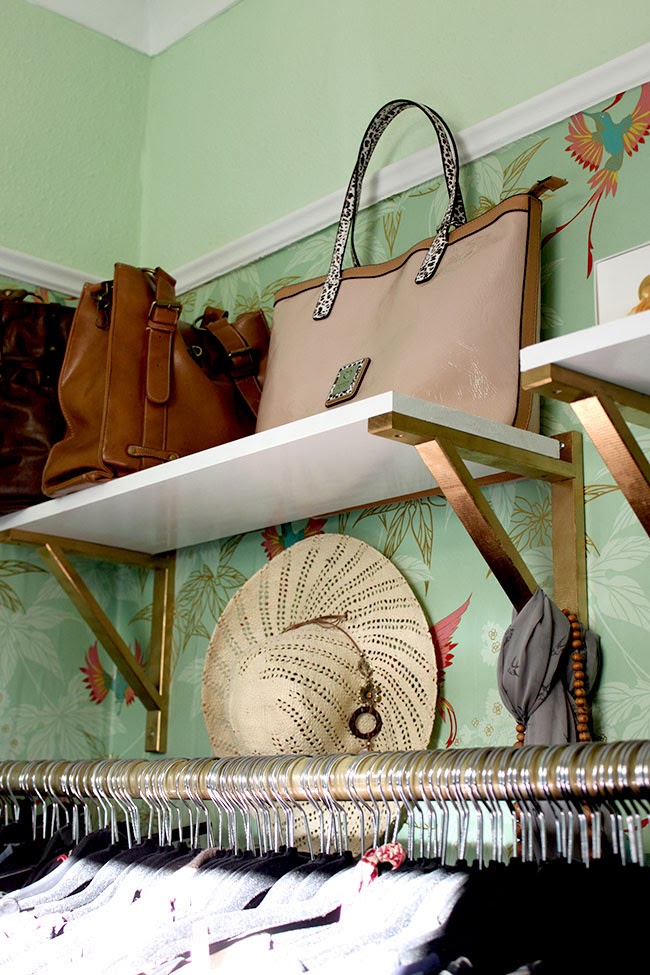 Moving on… I don’t think I ever formally introduced my fine feathered friend who hangs out on my dressing table.  I purchased this little girl a while ago and I think she looks rather regal holding some of my jewellery. 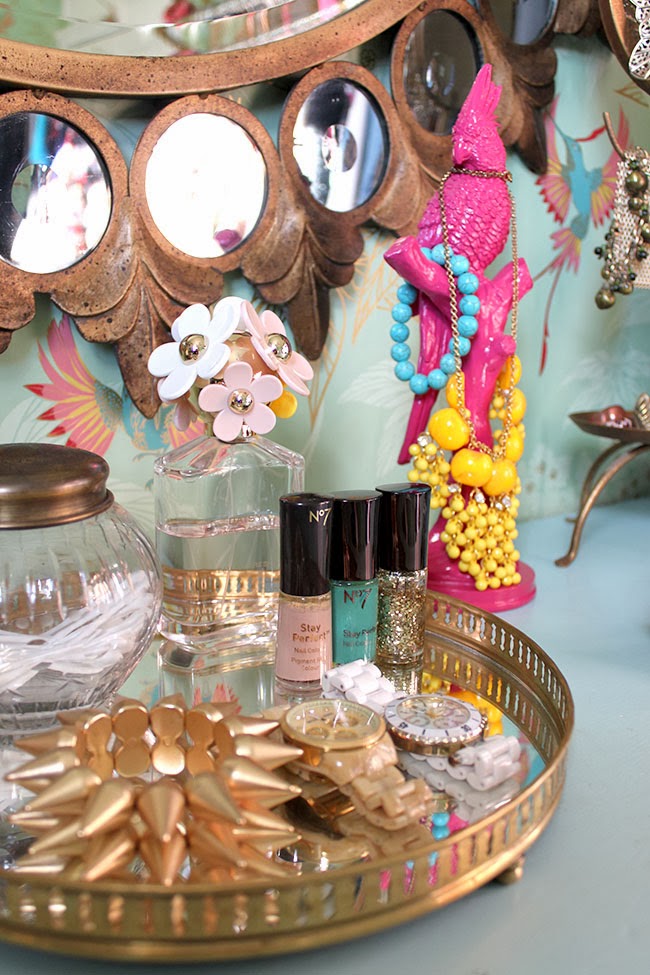 Despite the fact I bought a few bits for the bathroom, seeing as it’s not done yet, I’ve decided to use them in here.  Now, we all know what’s going to happen – the time will come for me to move them into said bathroom and I’m going to want to keep them in here and I’ll just end up buying even MORE things.  Bad, Kimberly, bad!  Oh well, at least they aren’t collecting dust somewhere, right? 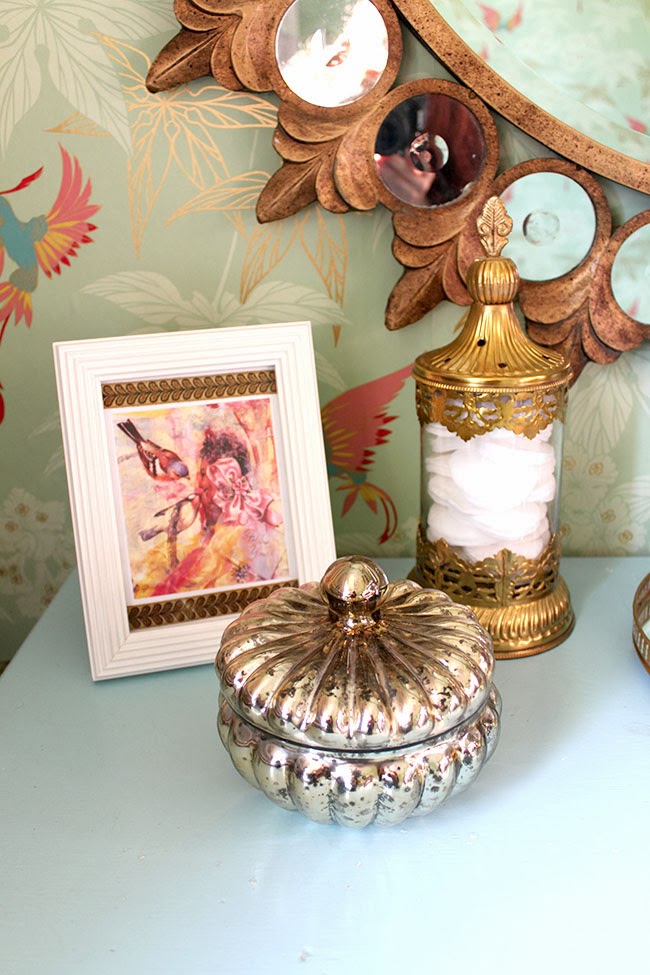 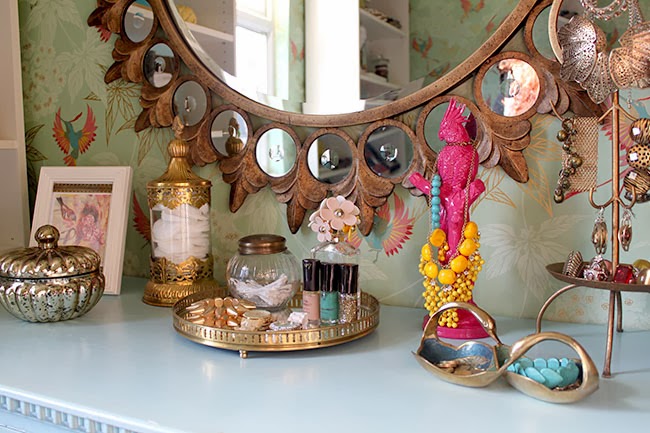 Of course, the bookcases turned dressing room shelving has had it’s bit of zhushing as well – I’ve pared back a few shelves just to give things some room to breathe. 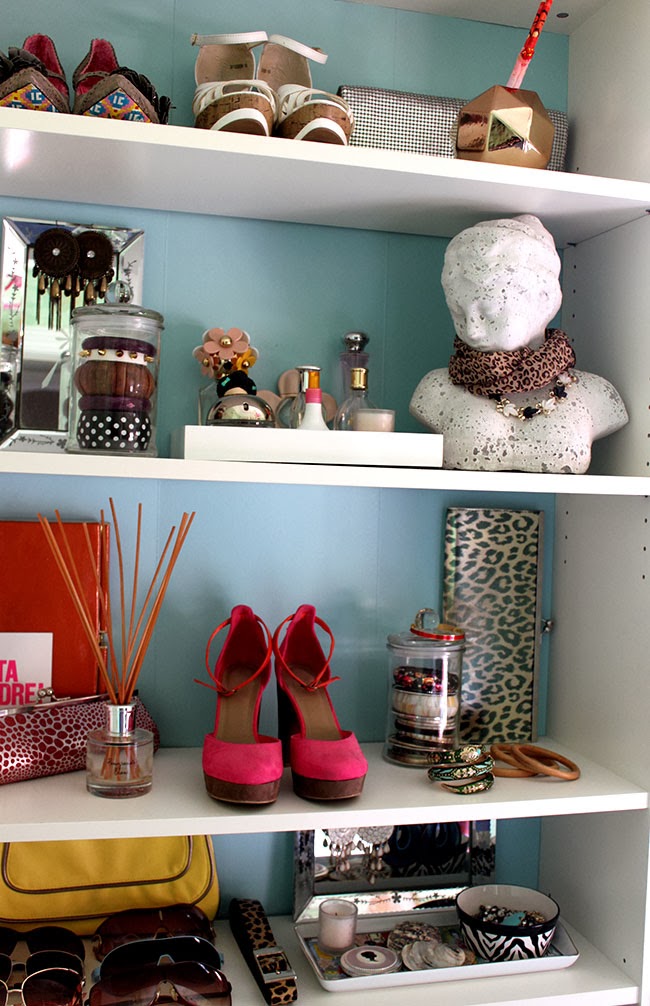 I realised my little glass pots that I’ve had for some time now (I think I got them in Matalan for only a few pounds each) were the perfect size to stack my bangles. 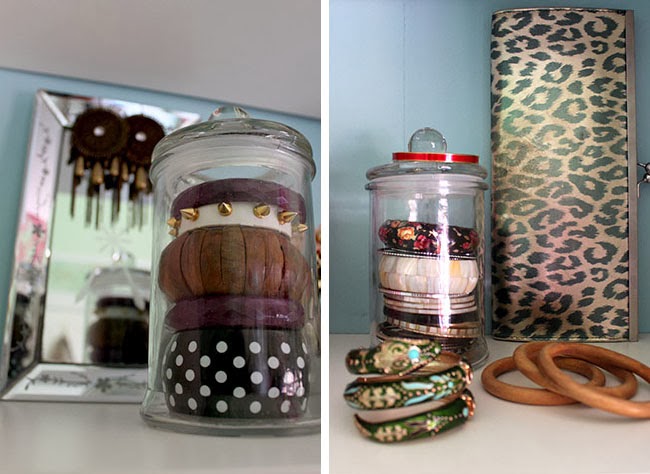 I realised after I styled everything up that nearly every shelf has a bit of leopard print.  What can I say, I’m a bit addicted to animal prints.  Oh and 10 points to anyone who knows the translation of that little white and pink postcard (I know what it means but it’s a bit naughty – shhhh)! 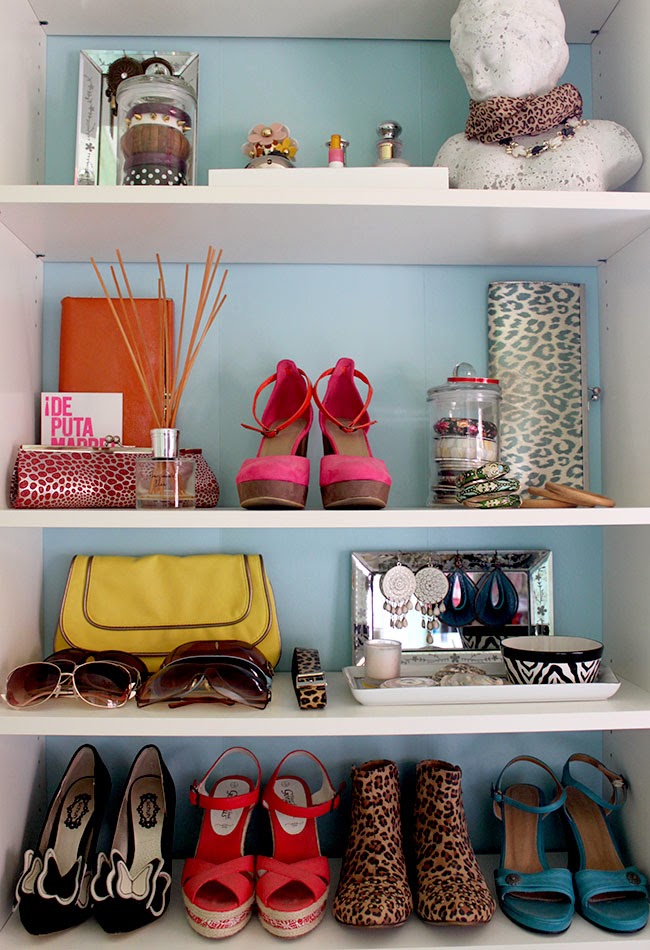 I also swapped out the skirt from my vanity.  Bizarrely, this is the off cut of my living room curtains which just so happened to match the bluey paint colour in here perfectly – it’s just draped over the rods at the moment, I need to sew it all up properly and I want to add trim to it which is one of the reasons I hadn’t shown it off yet but no idea when that’s actually going to happen so you get to see it early.  I also moved one of my bamboo chairs into here from where it was hanging out on the back deck – I figured I’d take it in from the cold and use it here for a bit.  The seat cushion isn’t quite right for the space so that might get changed out at some point. 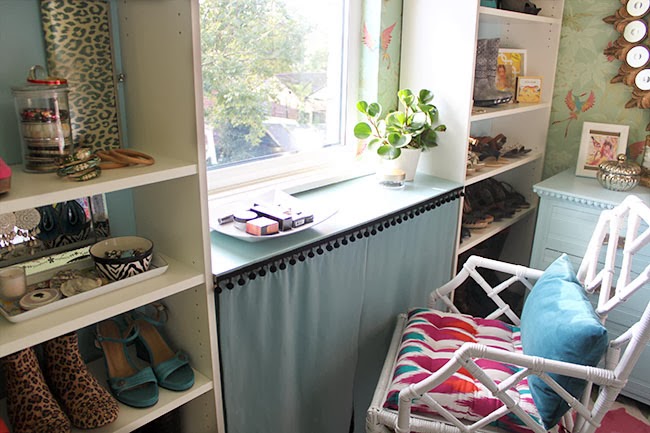 On the top of the vanity, I used the bowl that originally held all my bangles and have just put some of my favourite makeup on it.  In the last few years, I’ve become a bit of a product whore – I think it’s because I’m getting older now and putting cheap products on my face feels a bit wrong so I try to splurge when I can. 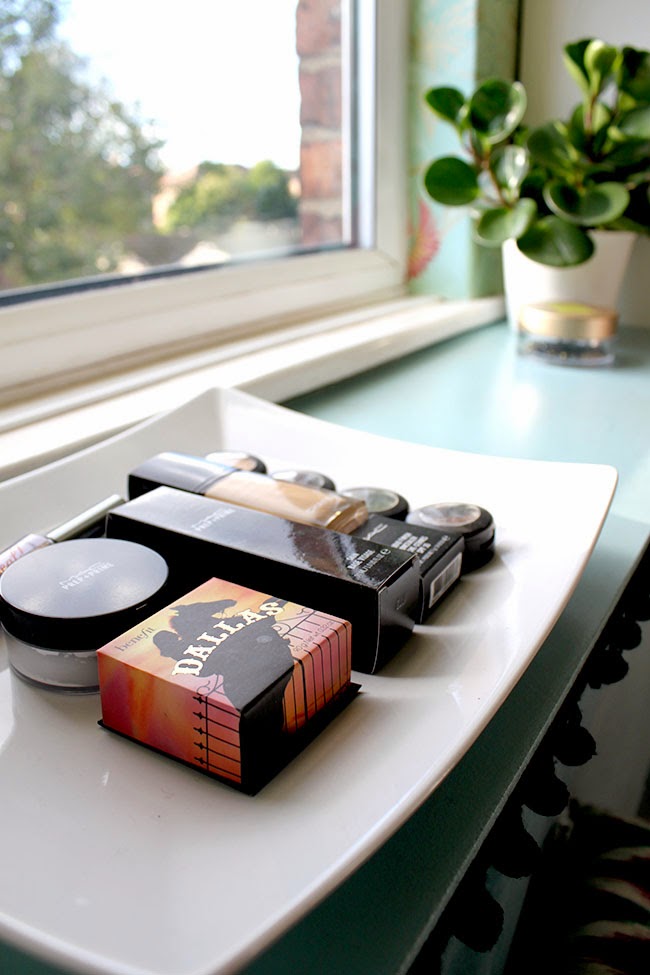 I’m addicted to MAC cosmetics, always have been a fan really but recently treated myself to Chanel Vitalumiere foundation and I’m loving it (just enough coverage to even out your skin tone and it really makes your skin look like it’s glowing).  I  know this isn’t like a beauty blog or anything but these are some of my favourite products and considering that in the last month, I’ve had 2 people mistake me for being in my early 30’s when I’m pushing 41… well, I figure I must be doing something right so take it however you like ;) 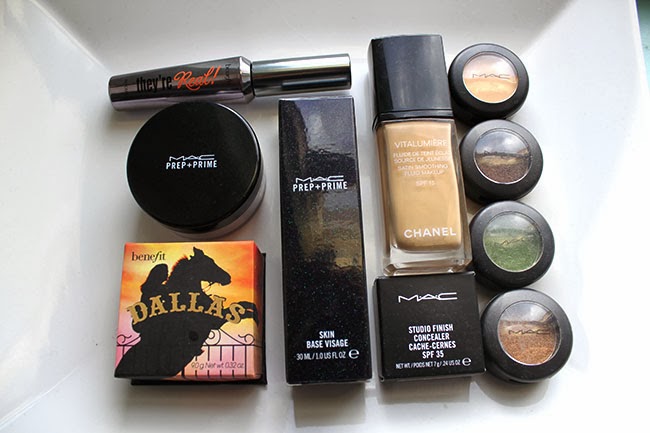 Annnyway, so the other shelf of course got the zhushing treatment too – I changed up a couple small things and got rid of a few things I no longer wanted/needed. 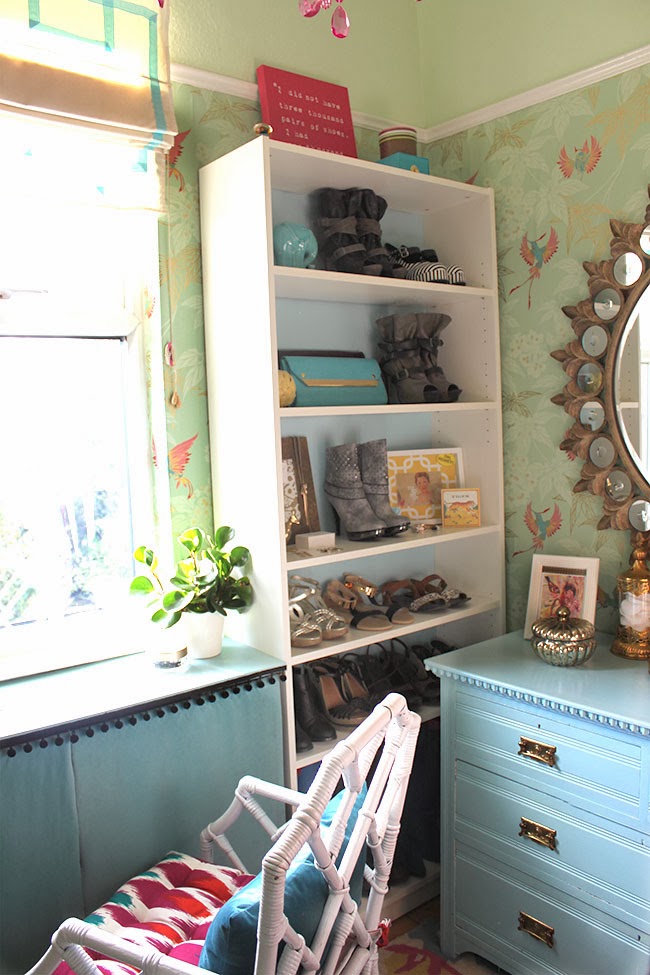 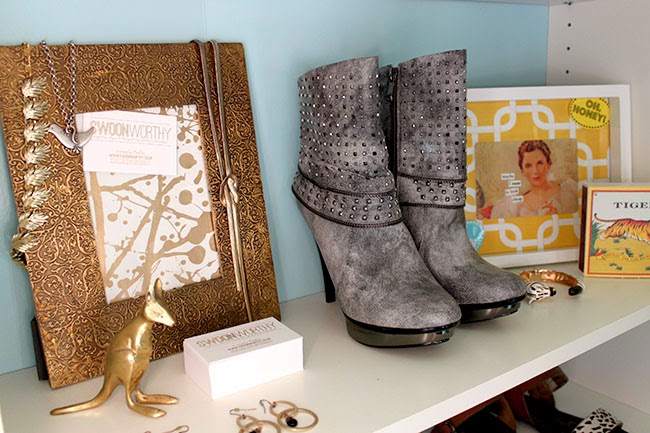 So that’s basically the whole shebang.  No huge changes, no big money spent (ok, except maybe on that Chanel foundation) and yet I feel the room looks like it’s had a bit of a facelift.  I do love creating little vignettes from the bits and pieces I have but the dressing room is sometimes more challenging as space is precious in my tiny room and I need to house all those practical things as well as pretty things.  Despite this, it does keep me from hoarding things I’m no longer using so suffice it to say, I have a load of stuff that’s going to the charity shops. 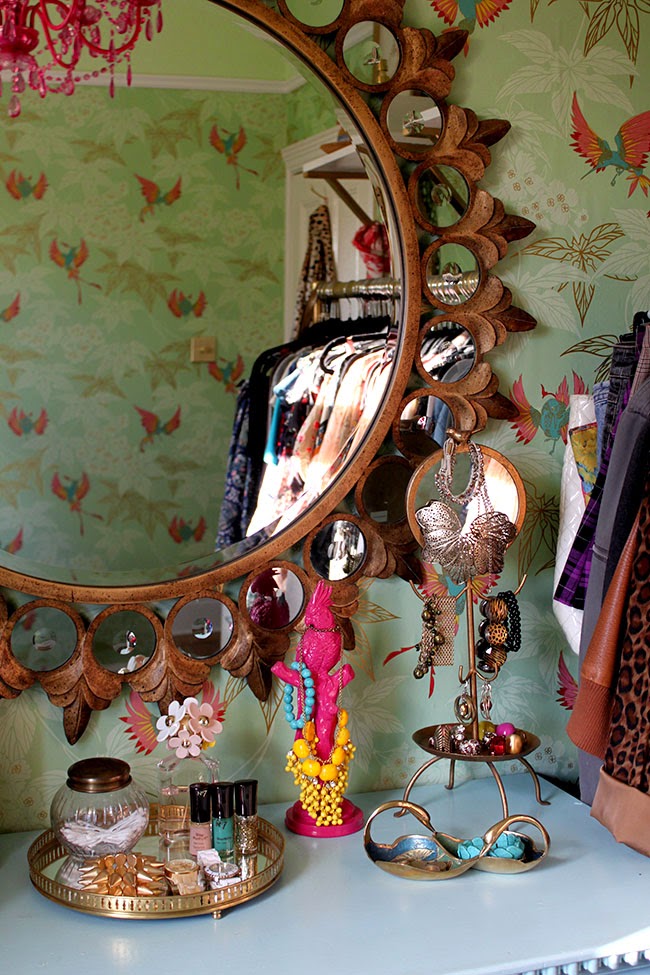 By the way, Meisha was ‘helping’ me when I took these photos so I’ll have to share those with you later but here’s a taster of the outtakes! ;) 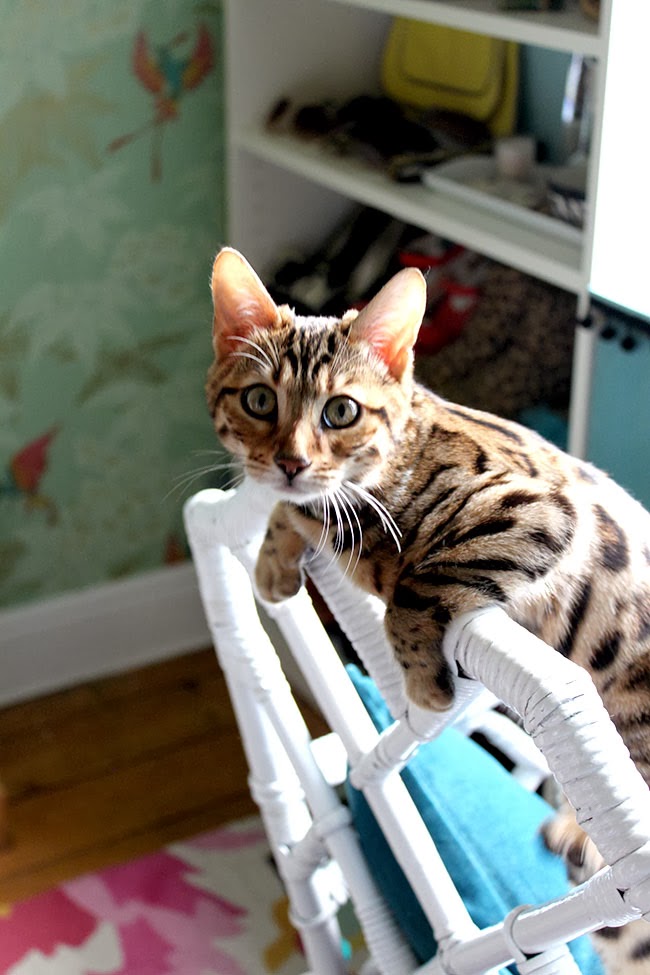 So what do you think of my little changes?  Have you given any of your rooms a refresh?  Any age-battling products you swear by?  Do share, I’m not getting any younger and can use all the help I can get! ;)