Still Learning: The Evolution of My Coffee Table

But I just thought I’d share a little story with you.  Ya see, when if like me, you start blogging about interiors before you really have a clue about interiors and styling or photography or hell, even writing, three and a half years later you have a shit load of evidence of just how inept you actually were.  But obviously, you also have evidence of how far you’ve come.  And that’s what I wanted to talk about. 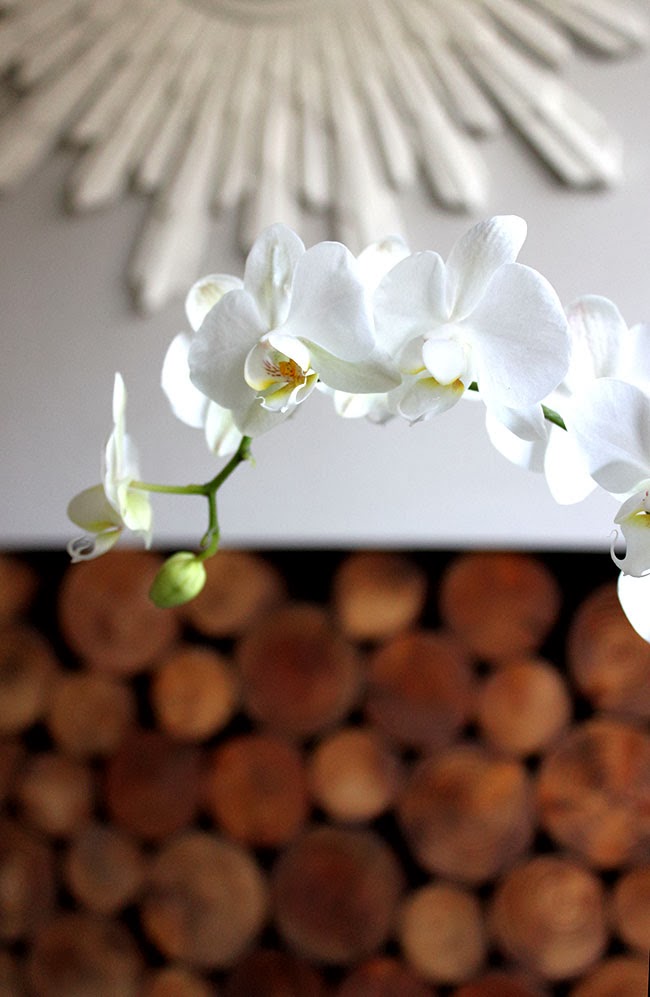 Ya see, creating vignettes has always been a struggle for me.  However, I can see I’m definitely making improvements so there IS hope if you find yourself in the same boat.  I’ve looked at probably a million images of vignettes done right that have caught my eye and studied them – taken them apart to see why it worked, tried to understand the relationships between colour, scale, pattern, texture and the negative spaces between them.  And somewhere in that time studying all these images, some of it has seeped through to my tiny brain and made me better. 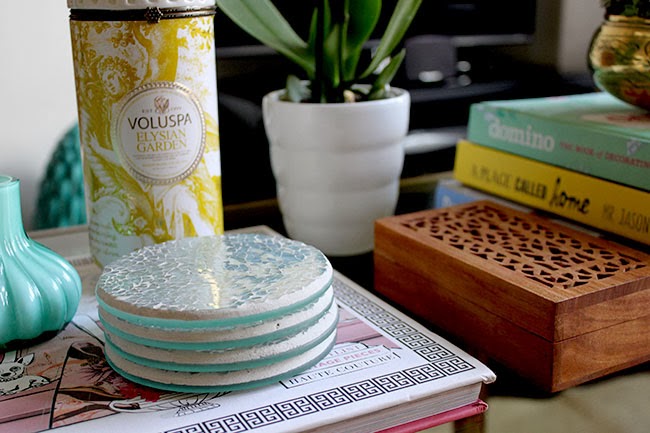 Now, that said, I am still learning.  God knows I am still learning.  There are a few areas in my home where I feel like I just CAN. NOT. GET. IT. RIGHT.  And that frustrates me because, dammit, I want to be great at this stuff.  Not just okay, not just passable, GREAT.  Why?  I dunno, probably because I love it so much and what’s the point in looking at a million pretty pictures if I can’t replicate that somehow in my own home?

One of the areas in my own home where I’ve struggled with a vignette is my coffee table.  So I went to a friend who’s styling skills I admire.  People, if there’s one thing I’ve learned, it’s that when you can no longer see the wood for the trees, just ask someone who’s taste you admire to help you.  It seems so easy but the amount of times I have forgotten to do this is embarrassing.

The reason I chose Carole from Mademoiselle Poirot to help me is not JUST because this girl got some mad skillz. After all, here is her coffee table… 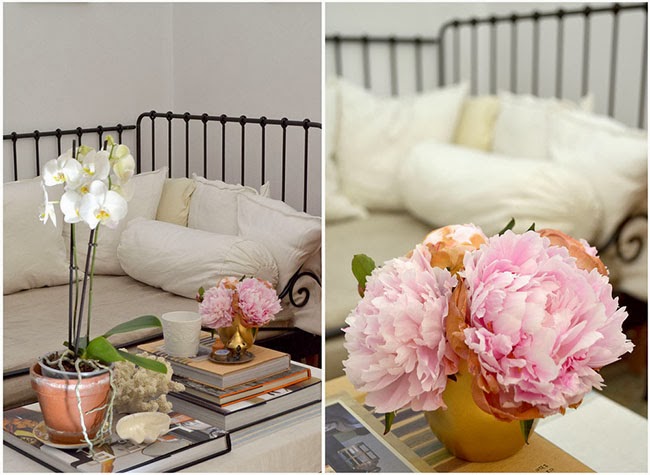 Pretty and effortless, no?  She has done quite a lot of styling work, both personally and professionally and that certainly does help.  But that’s not the only reason.  She is also someone I consider a good friend.  That helps too.  But mostly because she’s the most dead honest person you’ll ever meet. :) And I needed and wanted that – not someone who will just say it’s lovely so as not to hurt my feelings.  No, I needed someone who was going to give me honest feedback.  I knew Carole was my girl ;)

But before I show you the final result, I thought I’d take you on a little journey of the evolution of my coffee table in the last 3 1/2 years since we moved in.   Trust me, my lovelies, it’s a bumpy ride.

We start here… in July 2010.  Before I had my chesterfield even (which was one of the first ‘big’ purchases we made) but after we’d finished the floors.  It’s a little bland, I think you’ll agree.  My photography left something to be desired as well but that’s another post completely. 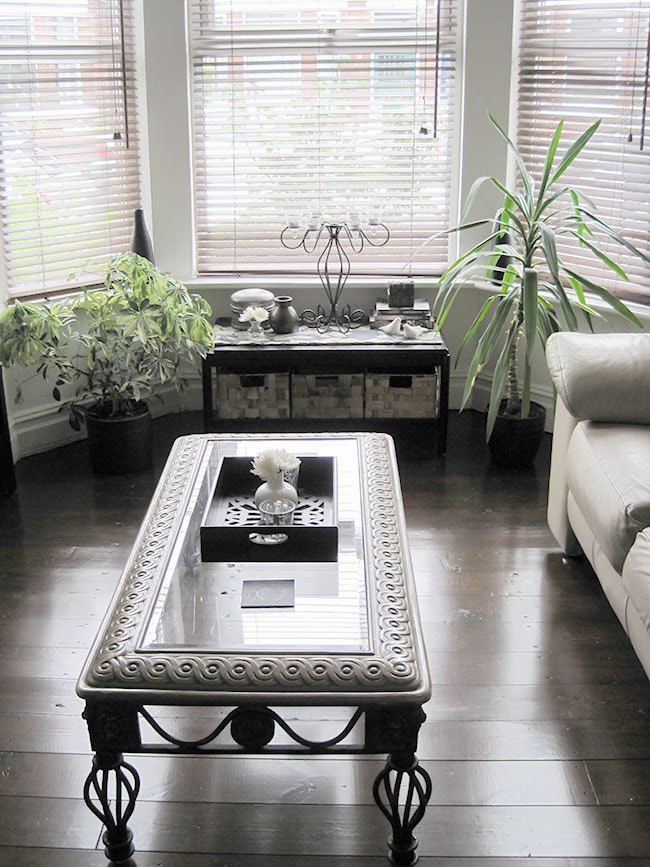 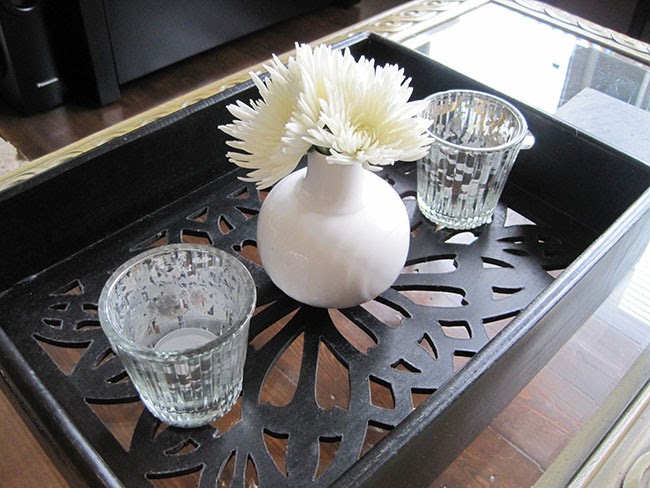 Shall we go on a little trip down memory lane to see how it’s changed since then?  You’ll see the evolution of my living room as well around it…

Here it is in January 2011.  Still resorting to symmetry and still failing miserably to create anything interesting atop my old coffee table. 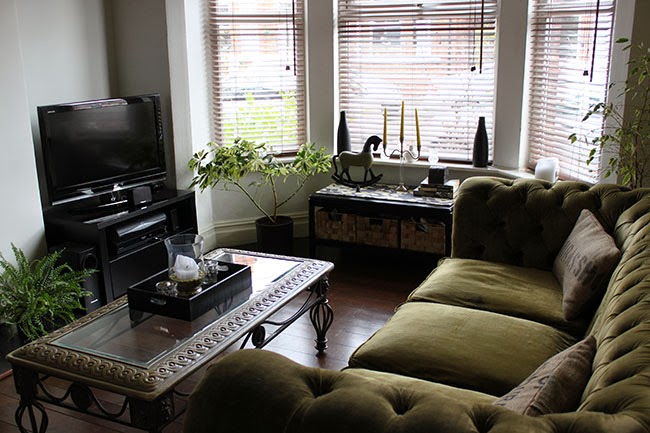 And then later in June 2011… That same little dark tray but at least I tried to be a more creative with my styling by not resorting to symmetry.  I was clearly trying the stacked book thing too.  But yeah, still too dark, still too boring, not enough variation of height. 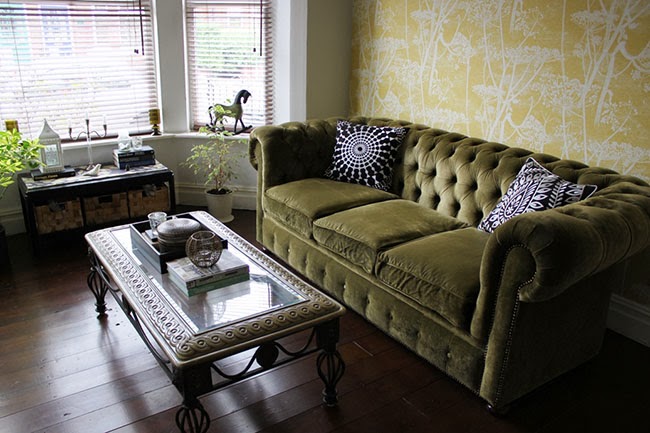 Here it is in March 2012.  At least there’s more colour and a variation of heights but it still wasn’t quite right. 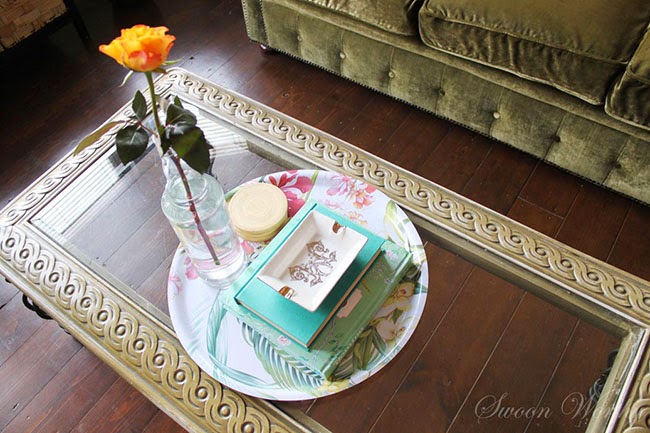 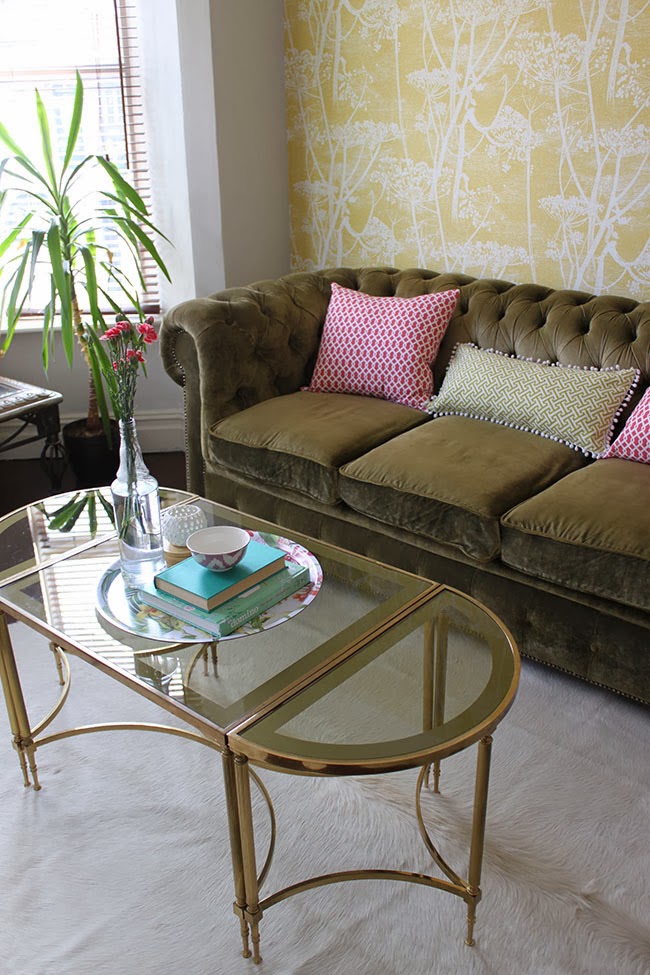 I made some changes by November 2012, changed the tray to a stack of books and a big gold bowl.  It was better – not great – but better.  And probably the closest I’d come to a half-way decent styling job.  But I wasn’t really happy yet.  Those little end tables were deluding me. 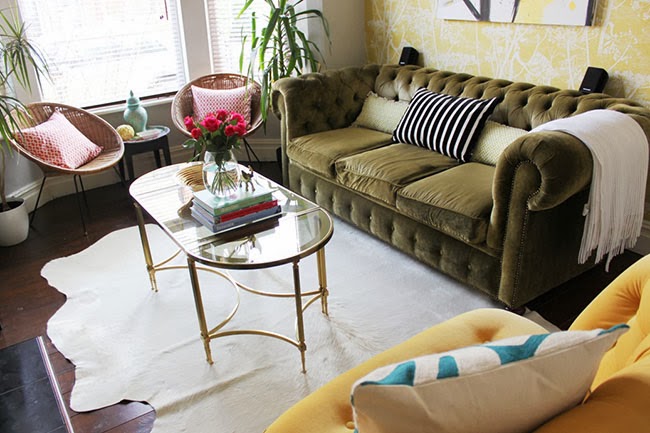 And finally, we’re brought nearly up to date with just last weekend.  I said in my previous post that I knew it wasn’t right and after nearly 3 years of trying and failing, I asked Carole where she thought I was going wrong. 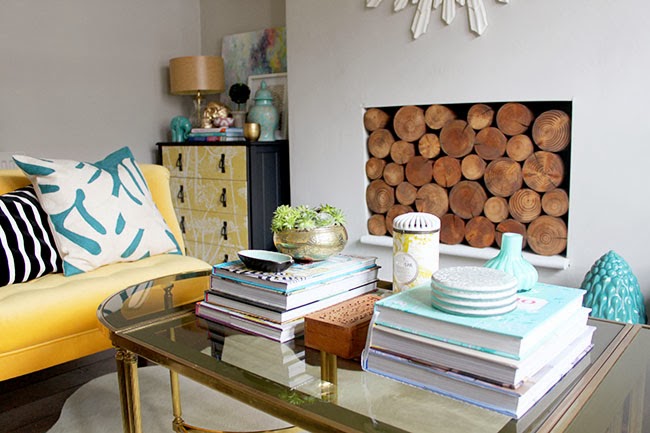 Carole gave me some pointers and constructive criticism on what she thought I could improve upon.  One of the things she told me is that I’ve been looking at my coffee table as three separate tables and that I needed to think of it as a whole.  This may seem obvious but to me it was a complete revelation.  I HAD been only concentrating my styling efforts on the middle table and then wondering what to do with the two half circle end tables that butt up against it.  Why was I doing this? Who knows.

Once I started to spread things out, ignoring the breaks between the tables, the whole table made so much more sense. 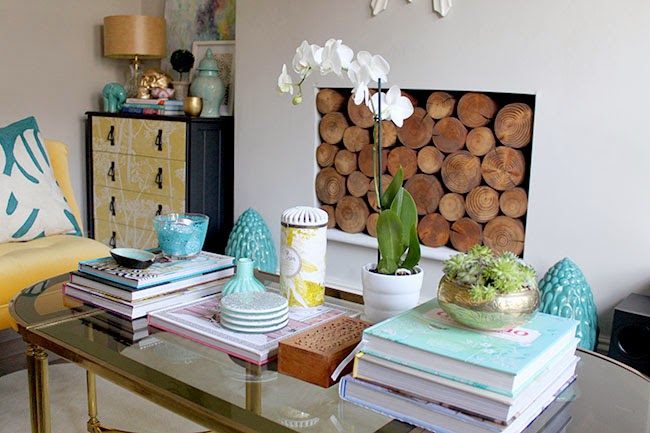 She also scolded me for stacking 4 books!! ;) So they are now all in odd numbers. 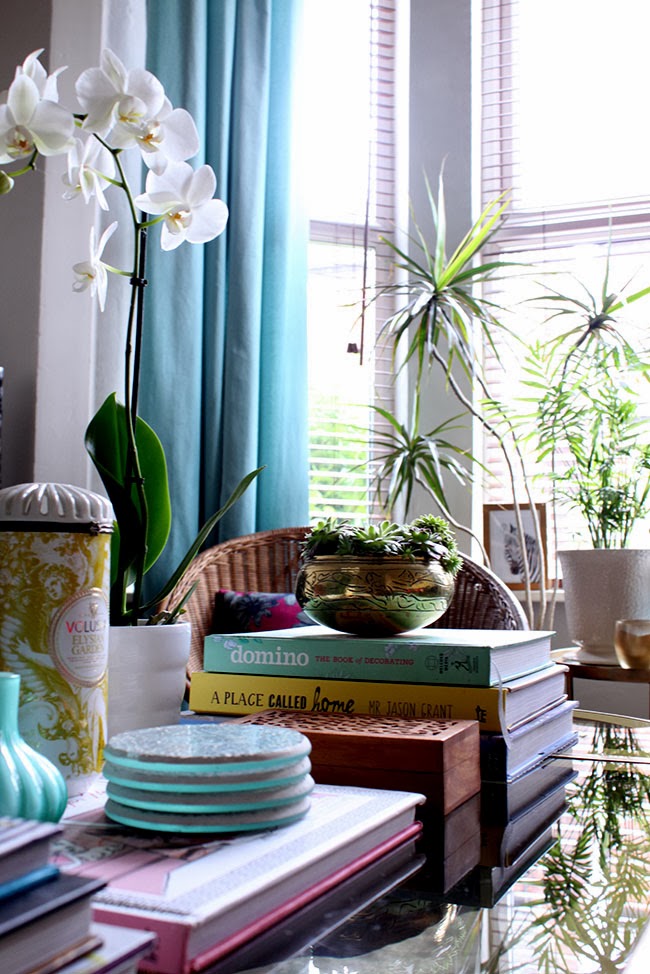 And I added an orchid – one of Carole’s favourites ;) – to give the table some height. 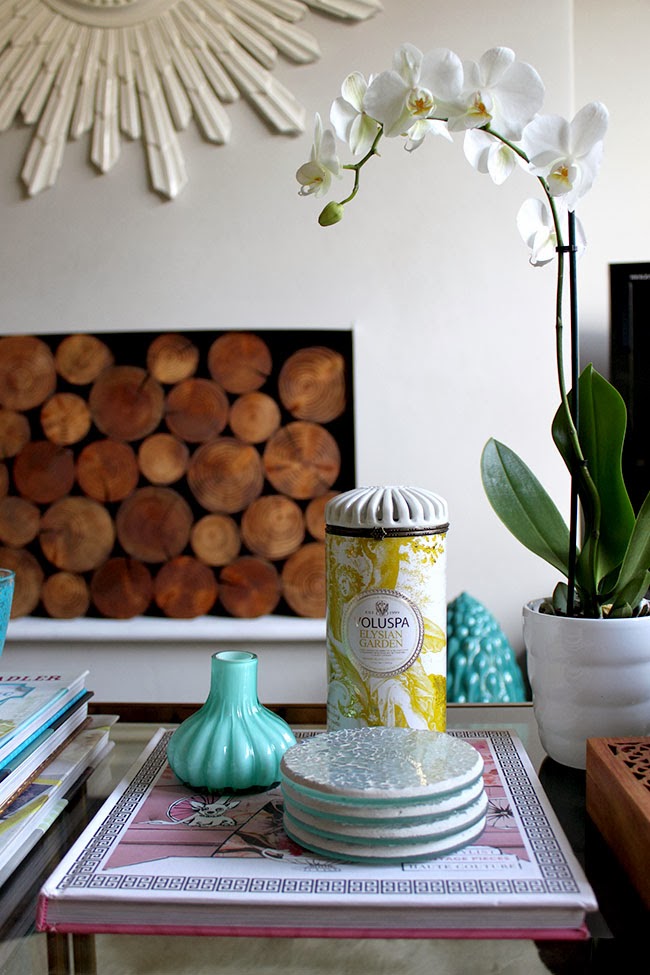 The rest of the items haven’t really changed much.  If I’d had one of those fabulous urchin sculptures, I would have used it here but I didn’t have anything that sculptural handy so I filled a glass bowl with tea lights.  It’ll do for now. 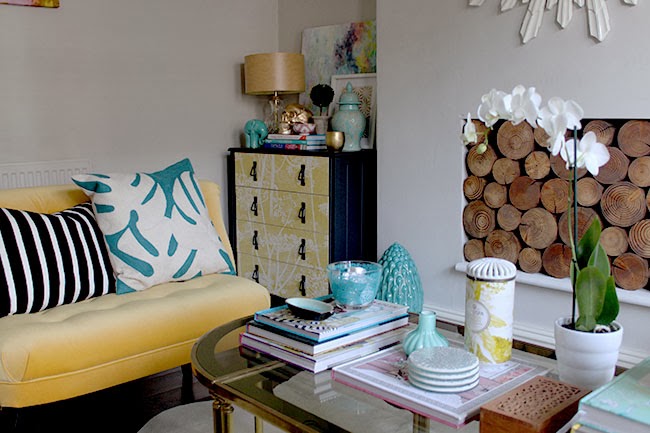 We both agreed that instead of three lots of books, a tray might work well and Carole sent me a link to one she thought might work. I instantly fell in love with it so that’s been earmarked for future reference. 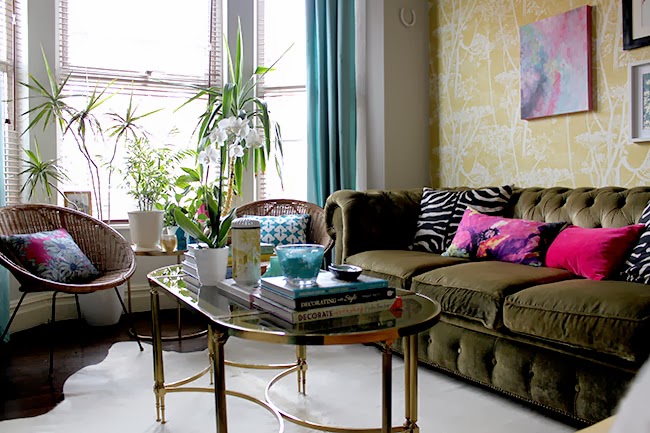 In the meantime, I’m pretty happy with the state of my coffee table right now – probably for the first time in 3 1/2 years.  Just goes to show that you are always learning and when you’re stuck – why not ask for help? 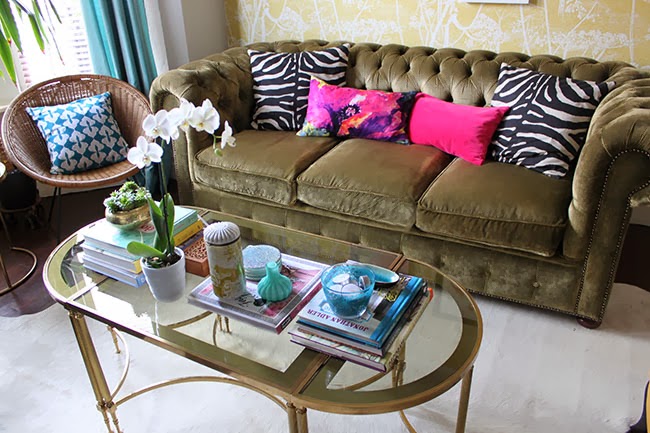 What do you think of the evolution of my coffee table?  And have you ever enlisted the help of a friend to get past a decorating obstacle?  I’d love to hear your own stories so please do share in the comments!