I couldn’t have been more excited when I got my invitation to the first ever Independent Interior Design Show in Manchester, held in the trendy Northern Quarter of the city at 2022 on Dale Street.  While London has always been at the forefront of interior design shows in the UK, Manchester was finally getting it’s own! Although I always thought it was a little crazy that everything seems to happen on the same week and despite the fact I was off to Amsterdam the following day, I was rather looking forward to browsing over 20 different independent homeware brands, all from the North of England.

Headlined by North West interiors expert and property developer Sian Astley of Moregeous Design Studio and co-coordinated by The Social Butterfly and Doodle PR, it was time for Manchester to share what the North has to offer.

Here are a few that I rather liked…

Eclectic Chair is a Manchester based creative upholstery studio, specialising in vintage and retro furniture, reupholstered with an eclectic variety of textiles.  I loved this cushion made with a vintage flamingo tapestry. 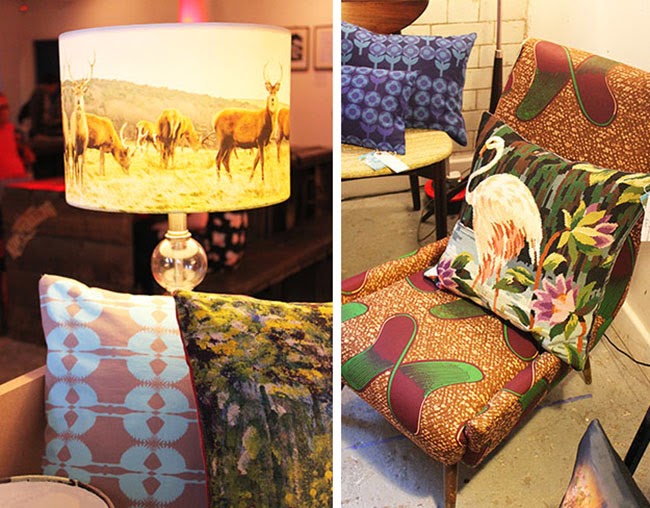 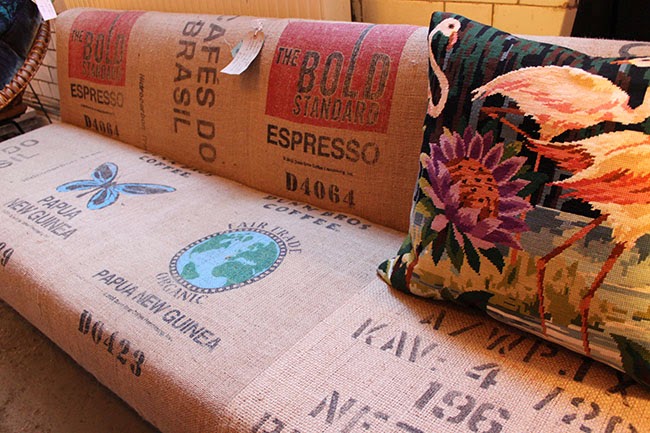 Liz Foster Design creates modern applique cushions with quirky fun designs.  I was very much tempted by ‘The North’ cushion – so cool. 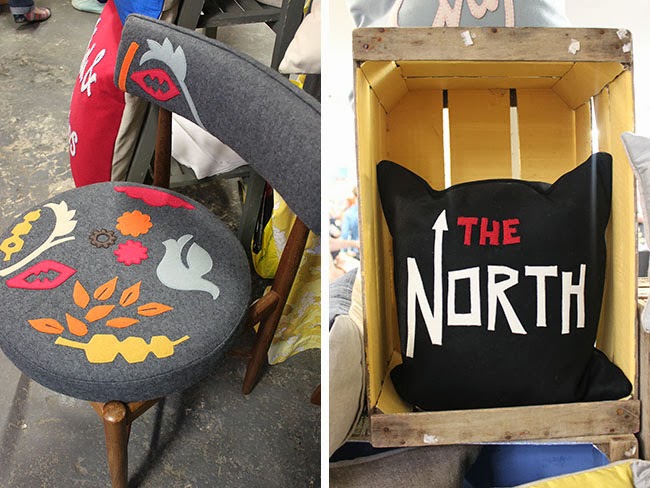 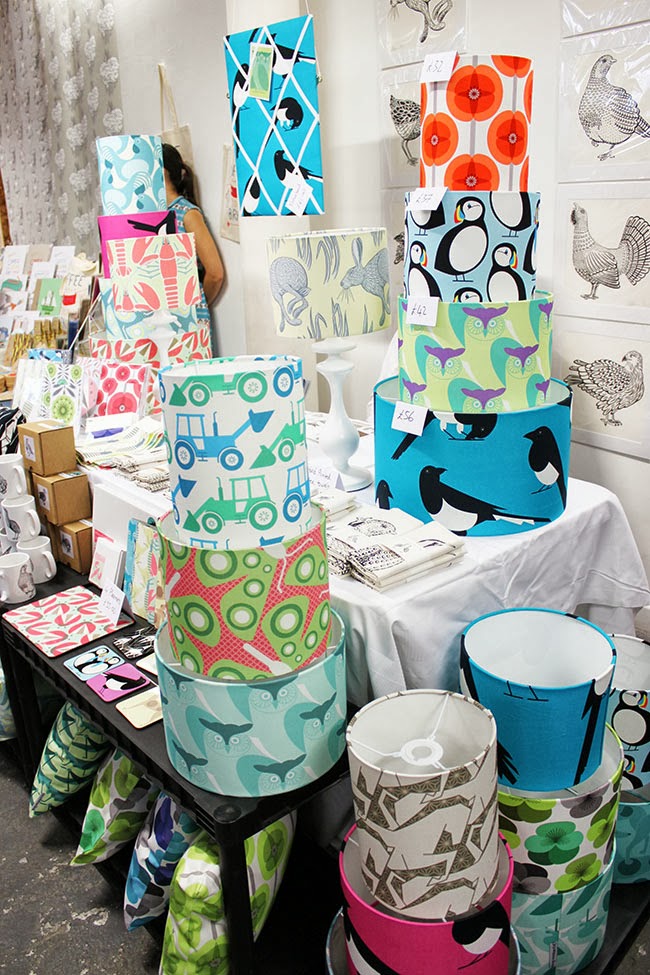 Flitty Bird is a lovely homewares store with all sorts of lovely things but the Bloomingville collection is what caught my eye.  I can just see loads of these cute little patterned mugs and bowls proudly displayed on open kitchen shelving. 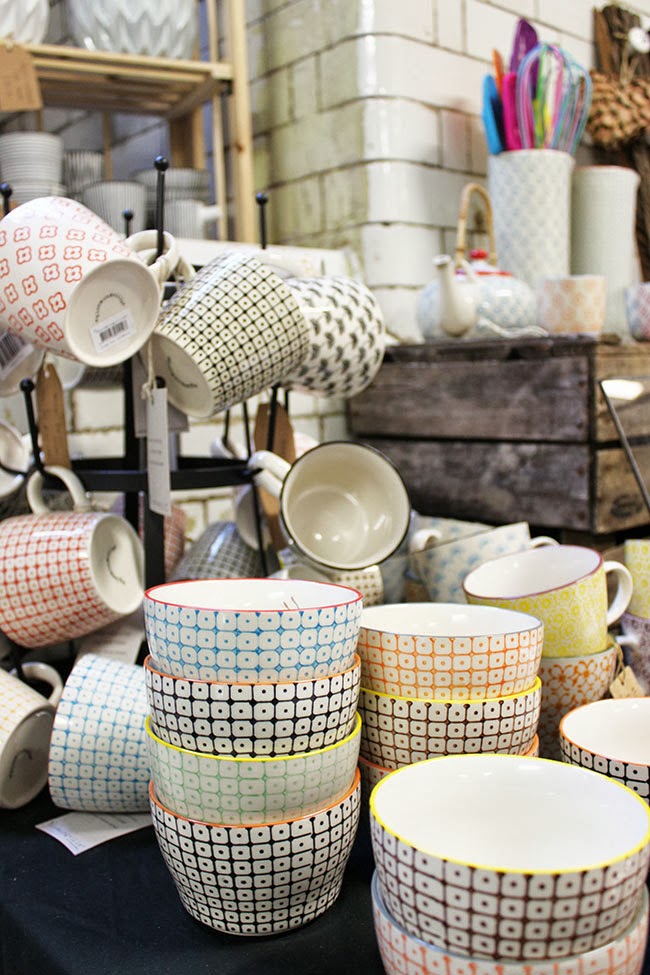 I got chatting to Calson & Co who create textiles using antique printing blocks.  These little blocks would have originally been used by printers to add decorative flair to their books and posters and they’ve been reintroduced to the world in a brand new way.  Lovely, no? 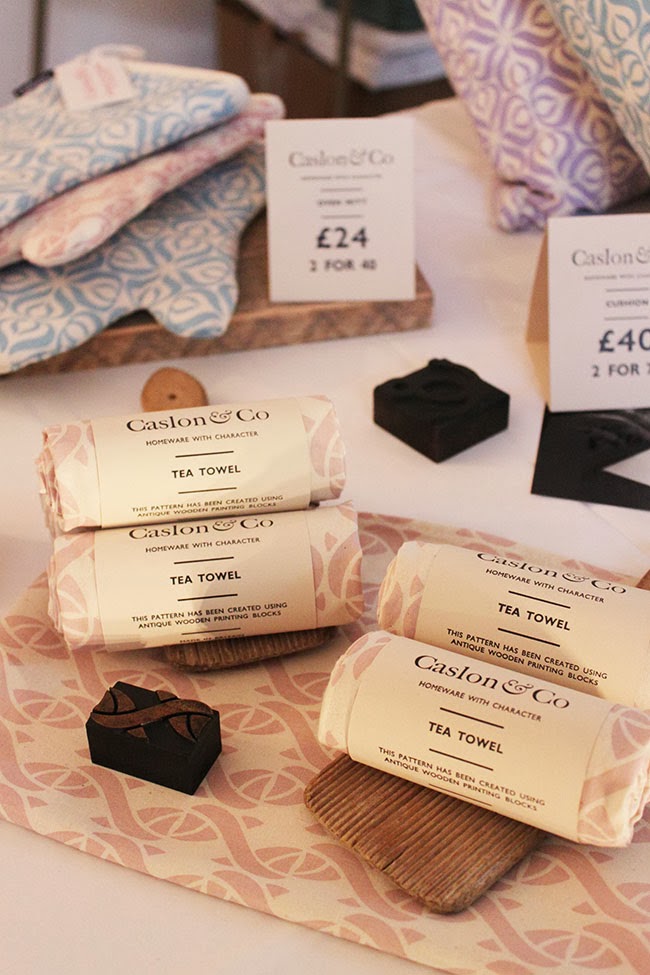 Another exhibitor of gorgeous prints was Annabel Perrin who creates vibrant textiles inspired by British locations and architecture.  I thought it was rather cute that it was only after launching her business that she found out her grandmother used to have her own independent shop, selling fabric and wallpaper to Sanderson and Osborne & Little.  Creativity is definitely in the genes! 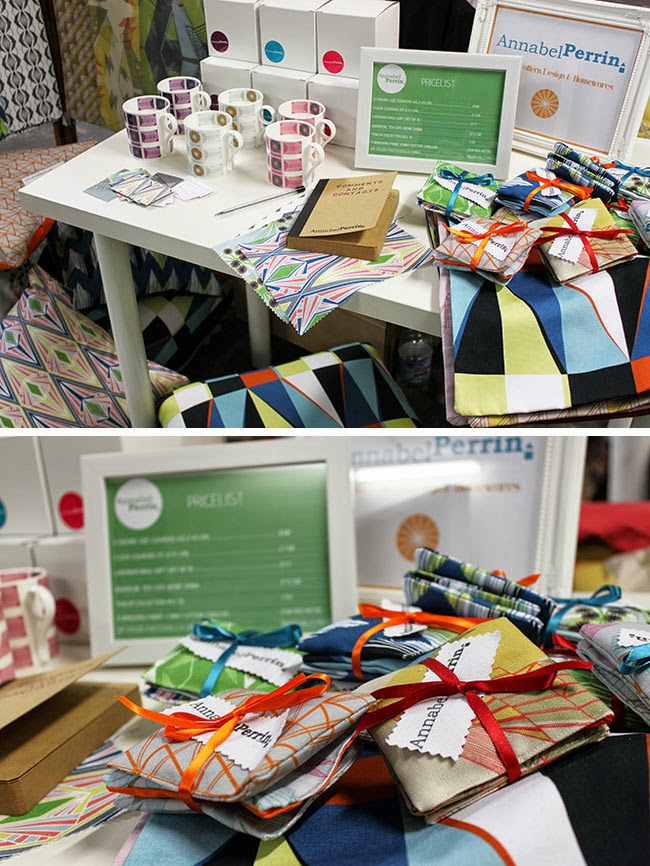 Wayne, who I dragged along with me on the promise of an early dinner and a few drinks afterwards, bless him, was very impressed with the structures of bespoke furniture designers Inspirit.  The wood and pipe shelving was something we’d considered doing long ago and seeing them in person reignited Wayne’s interest in creating something similar in the Man Cave. 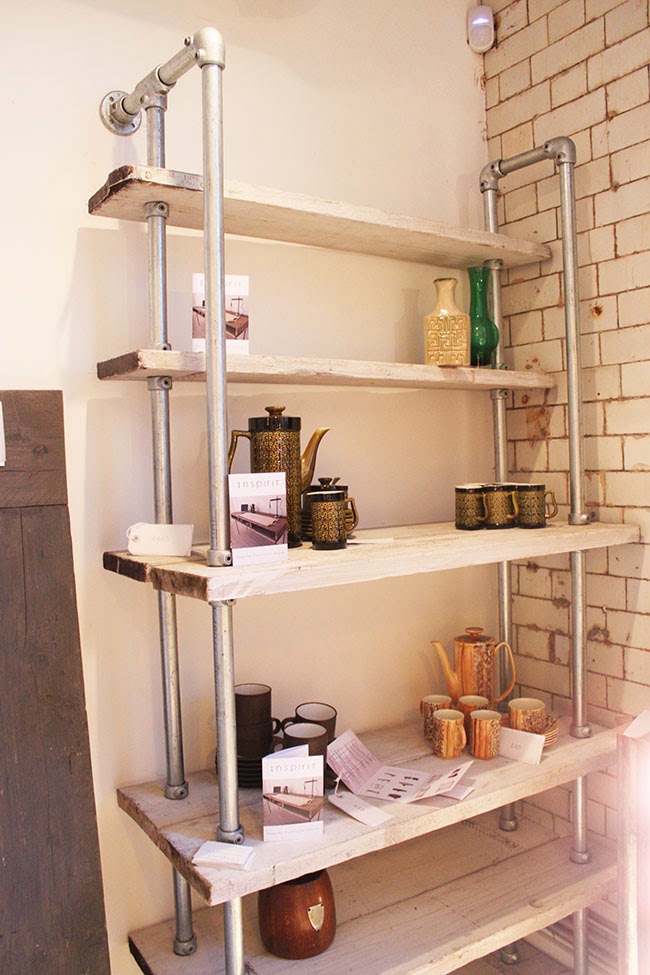 Moving back illustration and design, also exhibiting was surface pattern designer Claire Murray who’s wallpapers had so much movement, it almost looked as though her hand drawn prints were created floating underwater.  I loved the neon printed wallpapers and how depth was created using birds and butterflies throughout. 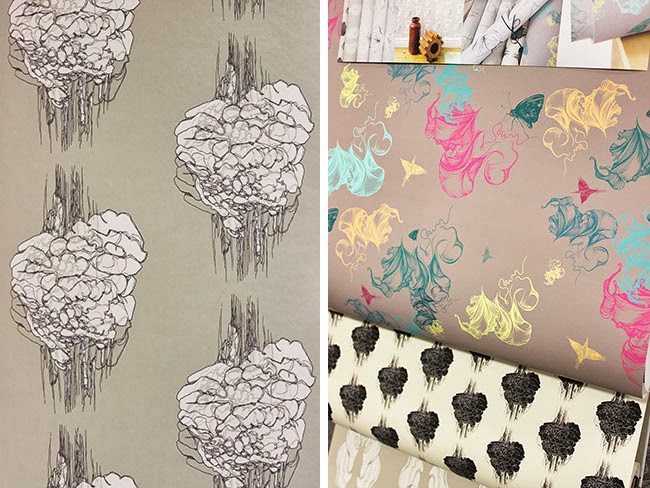 And finally, saving what I felt was the best until last was the absolutely gorgeous work of wire artist Helaina Sharpley who creates illustrations from wire, turning a 2D picture into a 3D sculpture.  It’s so difficult to really capture how wonderful these creations are in a 2D photograph but hopefully you can get the idea! 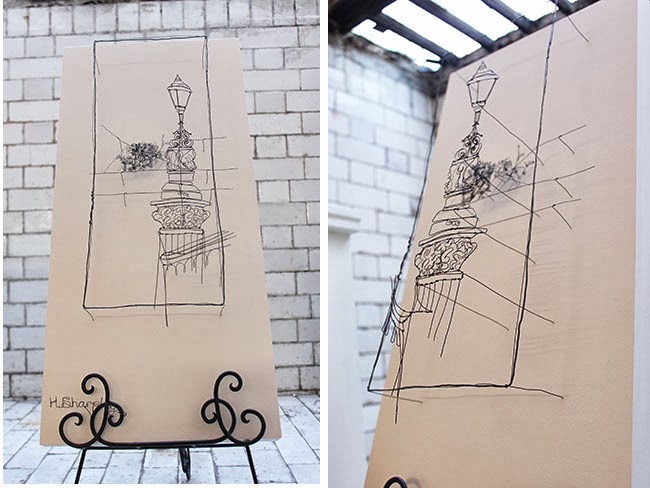 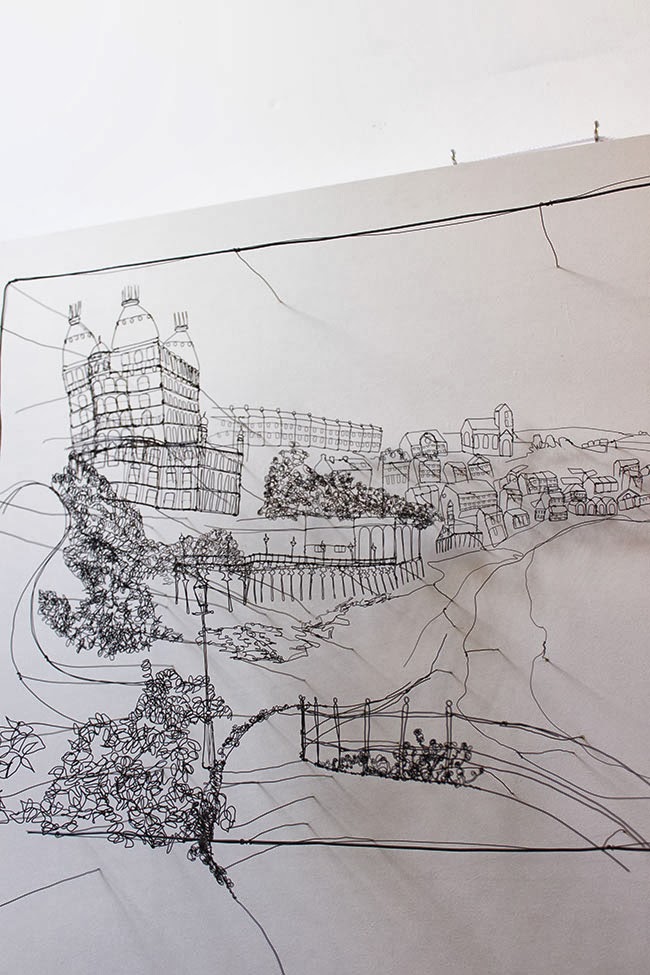 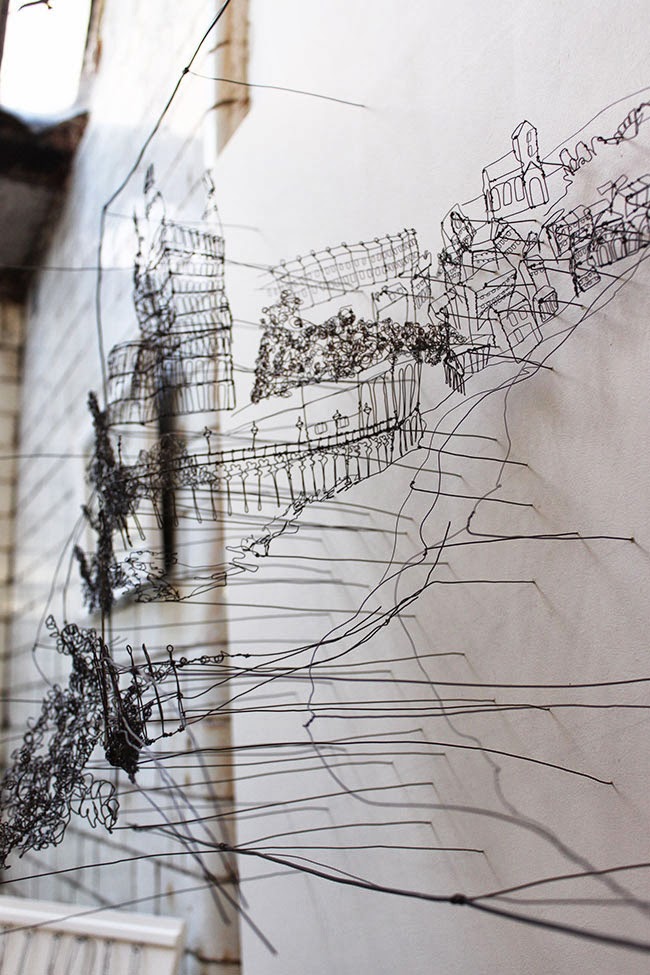 And so that’s my round up of the Independent Interiors Show, Manchester for 2013.  I’ve read recently that the event was such a success that they are already planning next year’s show!

What do you think of what the North has to offer? Any favourites of the ones I’ve shown?