So adventures continue in the Chinese Chippendale chair drama.  I swear I’ve either bought or sold every one the UK has to offer.  I think I’ve actually had a total of 12 now at some time or other – ok, so maybe not EVERY one but it feels that way.

It was always with the final goal of having a full set of 6 around my dining room table.  My first 4 armless chairs I’ve had for over a year now.  Then I bought a set of 6 – two real bamboo arm chairs which were painted white and an additional 4 armless ones that I sold.  I always had the intention of replacing the real bamboo arm chairs with faux ones eventually – it was just a matter of time before they turned up.  And lo and behold, they turned up.

But this time it wasn’t via eBay, it was actually via someone who started off as one of my readers and who I eventually employed as a contributor for AO at Home – because she’s clearly awesome given her fantastic taste in chairs ;)  Ok, that’s not the only reason why I hired her, sorry I’m getting ahead of myself here.

Anyway, Alex told me she had these 2 faux bamboo arm chairs.  She had a set of 4 arm chairs that she’d gotten at a great price but realised she really didn’t have room for all 4 in her home – did I know anyone that would want two of them?  Erm… yes.  Me.  I might have tried to climb into the email portal to get to her home to get the chairs immediately but somehow, technology hasn’t managed to get us to that point. Shame really.

Regardless of the shortcomings of technology, Alex and her other half Josh (who takes all those beautiful pictures of their home which you’ll see on her articles) came to deliver the chairs a couple of weekends ago.  It was lovely after the last few months of getting to know her to finally meet her in person!  She was just as lovely as I’d hoped – don’t you love when that happens?! :)

Anyway, getting to the point… Say hello to me soon-to-be-made-over faux bamboo Chippendale arm chairs.  Oh they are gorgeous, aren’t they?? 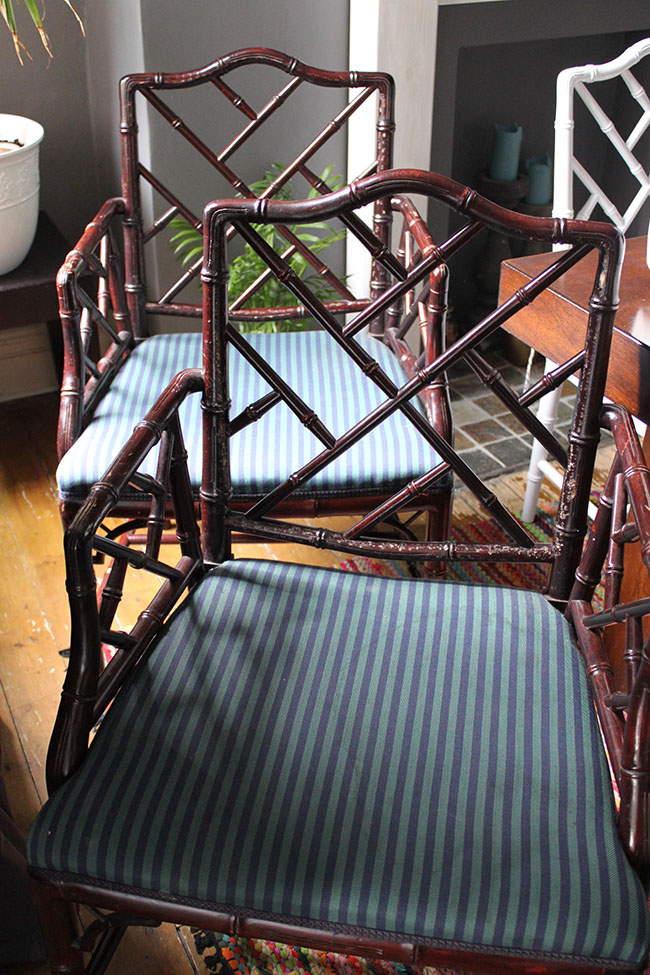 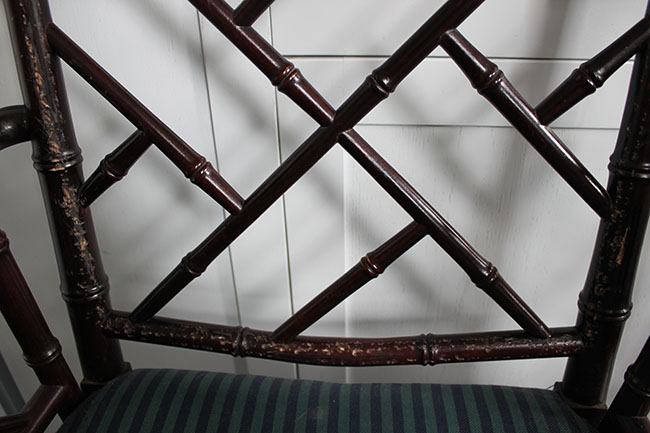 A little bit of an eBay tip here:  Alex got a great deal on these chairs on eBay because they had backs on them originally so that beautiful design was covered.  But spotting the arms and legs, she knew that there had to be a Chippendale back to them as well, this despite the fact the picture on the ad was so poor.  So eBayers, keep those eyes peeled on poor looking ads – you will often get your best price on those! 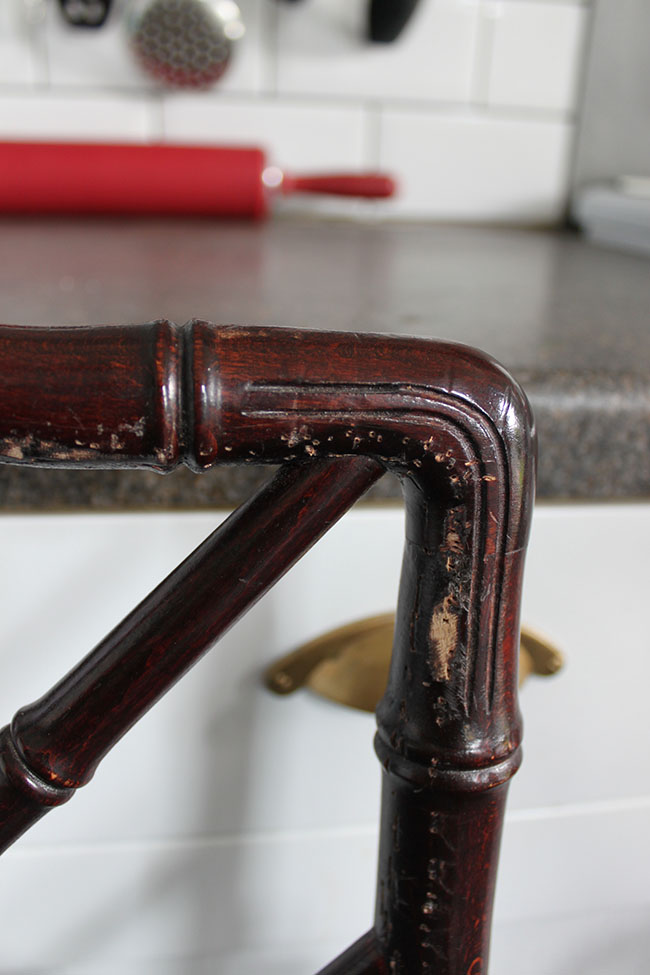 She painstakingly removed all the staples but as you can see, the wood has been gouged so they need to be filled and sanded.  Because of this, she only wanted to charge me £60 for both chairs.  I felt like I was robbing her so convinced her to take £80.   I mean, £80 for 2 beautiful Chippendale chairs that were delivered to my door?  Is this the bargain of the century? I’m thinking it may be.

So Wayne will be painting in his body shop a glossy white to match the others (my full set will be complete – hurrah!) and then I’m actually going to attempt to reupholster them myself.  My first upholstery project!!  Eek! 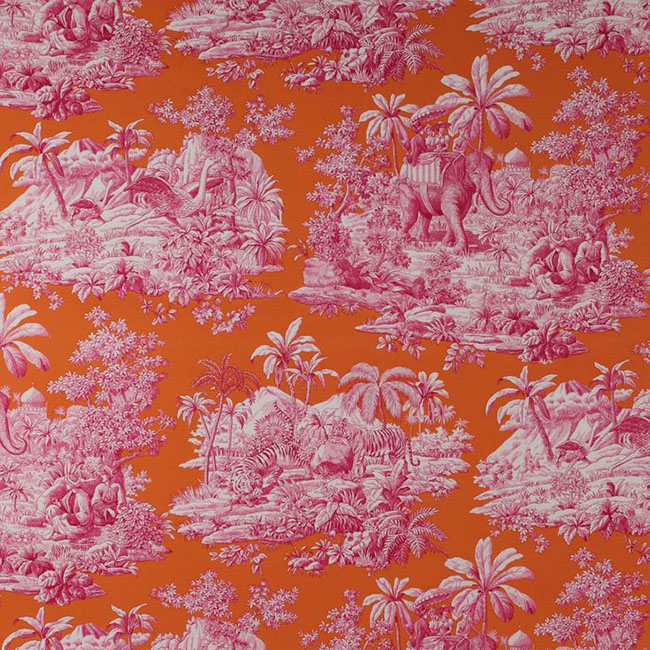 Yes, that is Manuel Canovas Bengale fabric in Paprika.  And god won’t it look pretty in my dining room?! 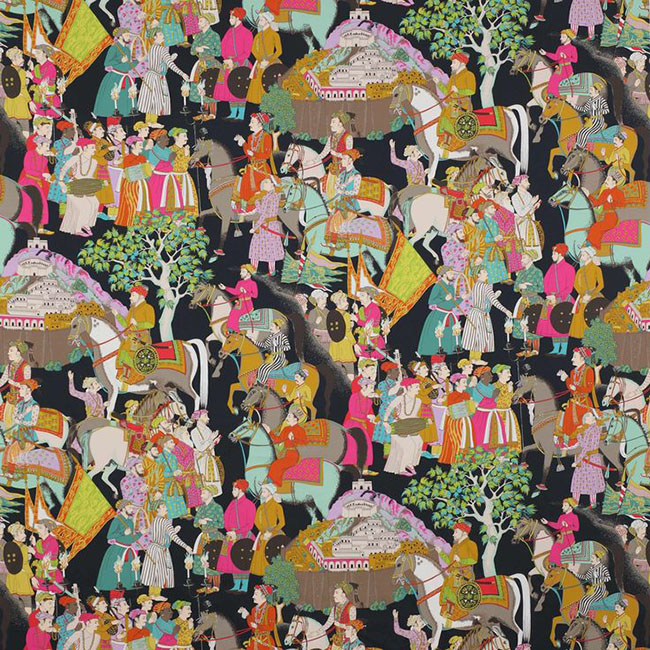 Stay tuned to find out which one I choose!

So you might be wondering what I’m doing with the real bamboo chairs – well, I decided to move them outdoors to my decking area. 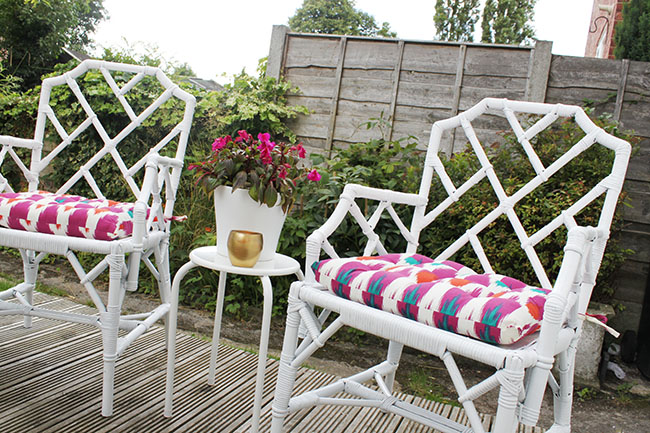 Bear in mind, there is a LOT of work to be done out here but with the addition of some new chair cushions for £15, I do think they look rather cute.  And painted with glossy car paint, they are pretty impenetrable to the elements (within reason, we’ll take them in come winter). 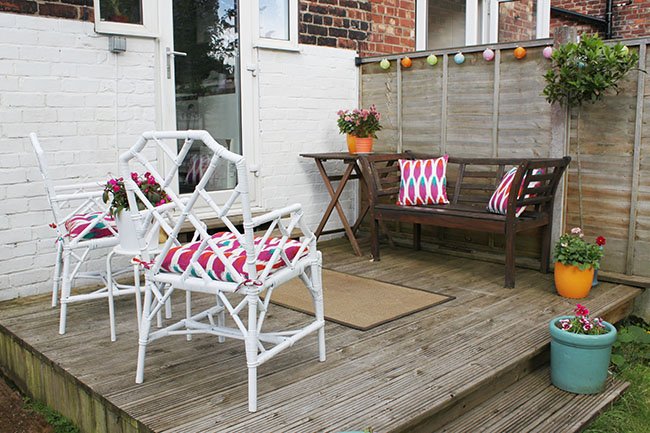 The little gold candle holder was a gift from Carole who made these out of glass tumblers and spray paint – she’s awesome that one.  The tutorial will be on the AO at Home blog on Tuesday. 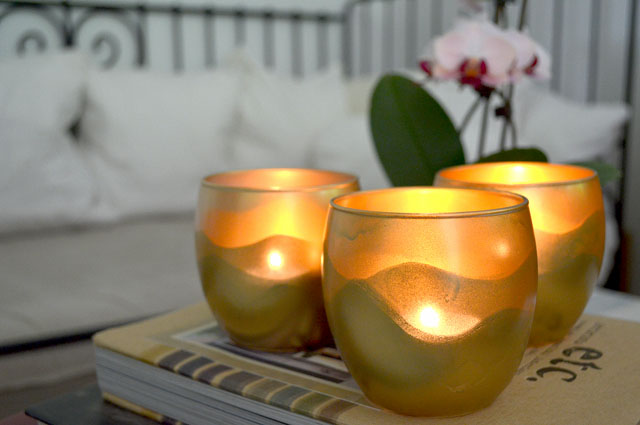 Have I mentioned how much I freaking LOVE my contributors?  They rock my socks, seriously. 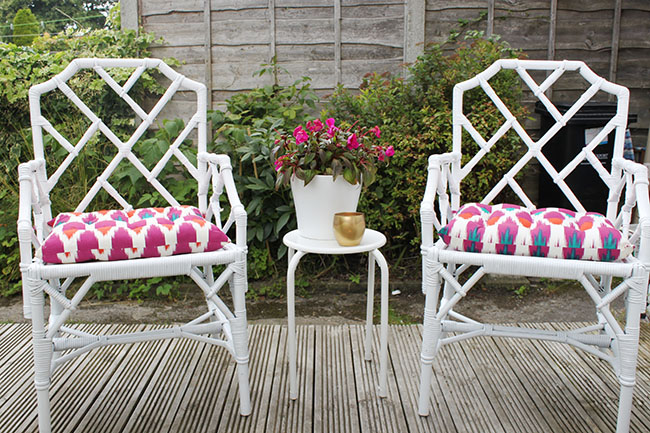 So stay tuned for my adventures in using stupidly expensive fabric (well to me anyway) to cover chairs on my very first upholstery project.  This should be fun, eh? 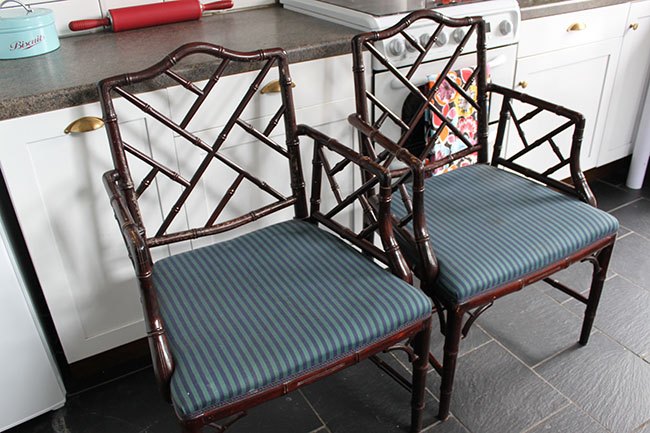 Get any bargains lately?  Which fabric would you choose?  Or would you leave them as they are?