Behind the Scenes: The Truth Behind Photography Shoots

So as I mentioned previously, life over the last couple of weeks has gotten a little bit crazy and my posting has become a bit sporadic.  My apologies for this.

The reasons for this are threefold:  we’ve been in the midst of Operation Bathroom Remodel, work has been crazy busy as we go full steam ahead with the AO at Home blog redesign and I had an impending photography shoot where the house had to NOT look like a building site (a bit of a tall order considering the sheer amount of STUFF AND DUST that spills over when you are remodelling).

I admit quite openly that I am not a superwoman and so I actually got a cleaner in a few days before to help me with getting this house in order in preparation.  Work has been ultra busy and as much as I do love it, I knew that there was only so much I could do myself.  The relief after she had been to scrub floors, dust and clean windows was a huge weight off my shoulders and I don’t regret getting help when I needed it.  Of course, there was still more to do after she’d been in to make sure every single thing was set up and prepared (like ironing bedlinen, getting in flowers, last minute styling, hoovering etc) and I spent most of last weekend doing all the little things but goodness, it was a big help.

Here’s my kitchen on the day of the shoot – looks pretty good, no?  FULL DISCLOSURE: IT NEVER REALLY LOOKS LIKE THIS. 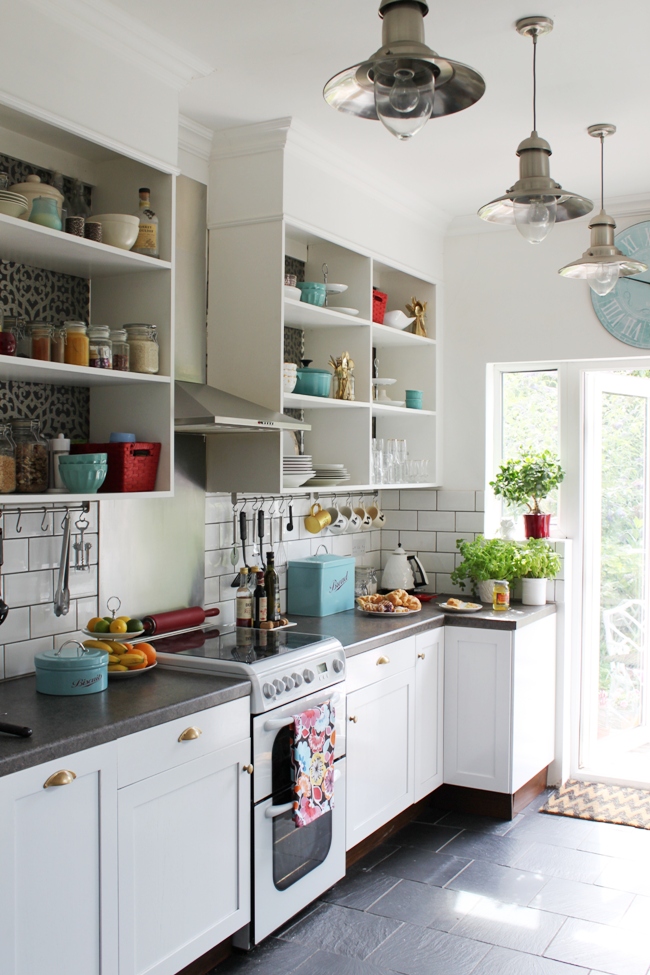 LOOK AT THE IRONED BEDLINEN.  IT NEVER LOOKS LIKE THAT EITHER. 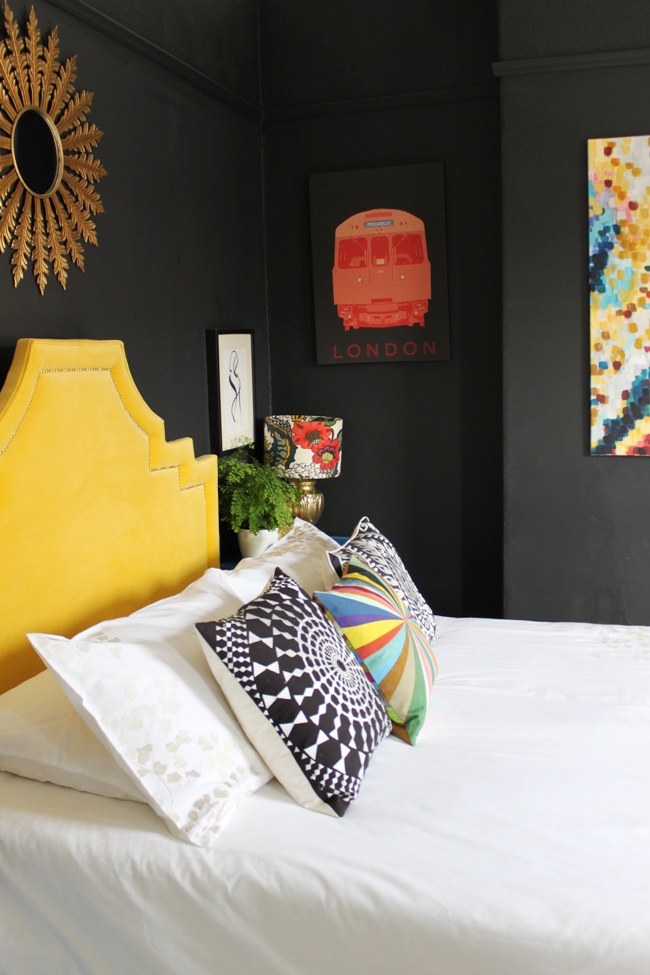 Alas I can’t give you the precious details of the shoot itself.  What I can tell you is that it’s a bit of a secret project for London-based interior stylist, Joanna Thornhill who approached me a couple of months ago.  She’s working with photographer Emma Mitchell and both came up for the day for the shoot. 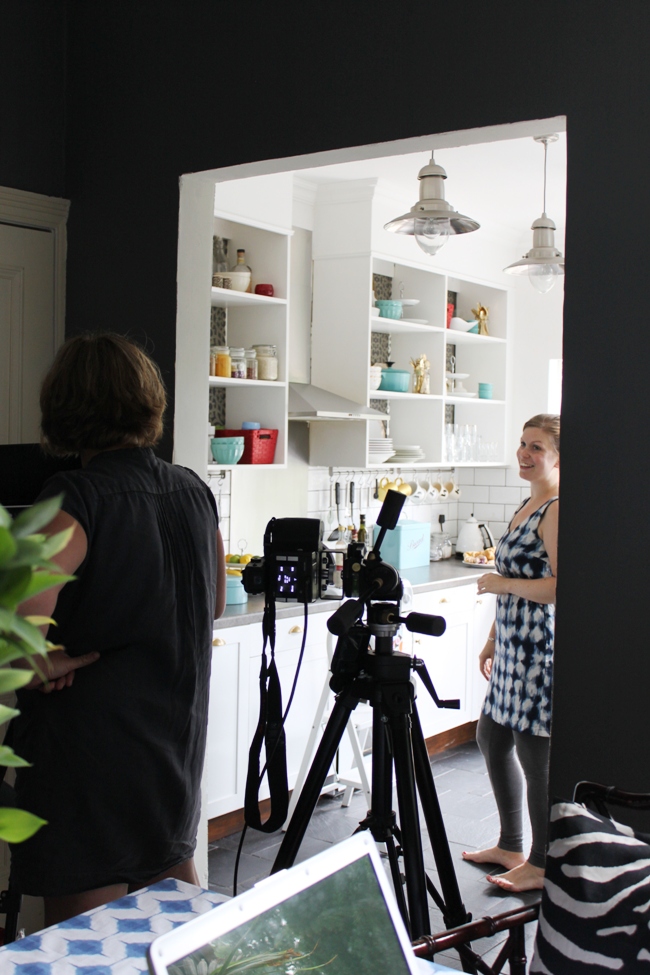 Photography shoots are funny things as I’m learning after having three of them now.   It’s not about a whole room looking good really – it’s just about the shot.  They were getting 3 shots thereabouts for each room (living room, dining room, kitchen, master bedroom, dressing room and the patio outside) and it took from 9am until 6pm to get those precious 3 shots in each. 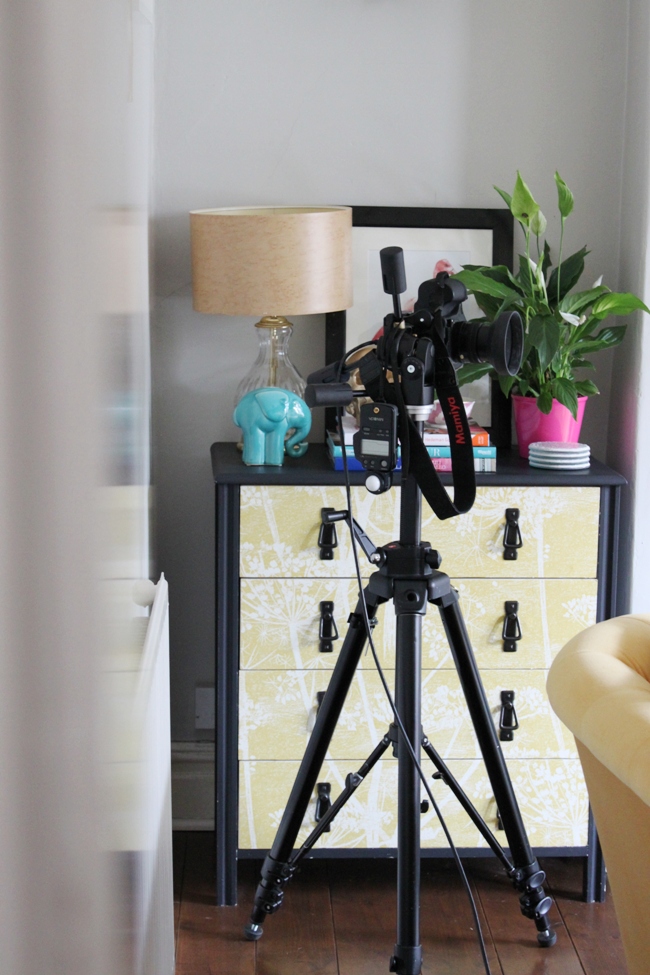 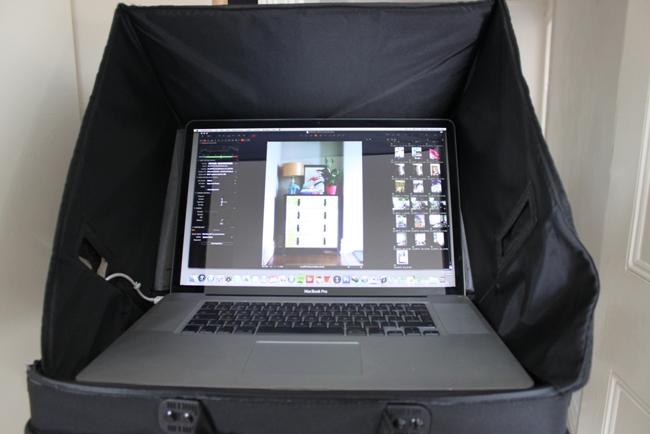 Every single detail is dissected and discussed, items are moved an inch here and there, the picture retaken and examined, something added, something taken away.

NOTICE ALL THE CRAP ON THE OTHER SIDE OF THE CAMERA.  This is what it’s really like behind all those beautiful shots you see in books and magazines – the reality is that it doesn’t matter if it’s not in the shot. 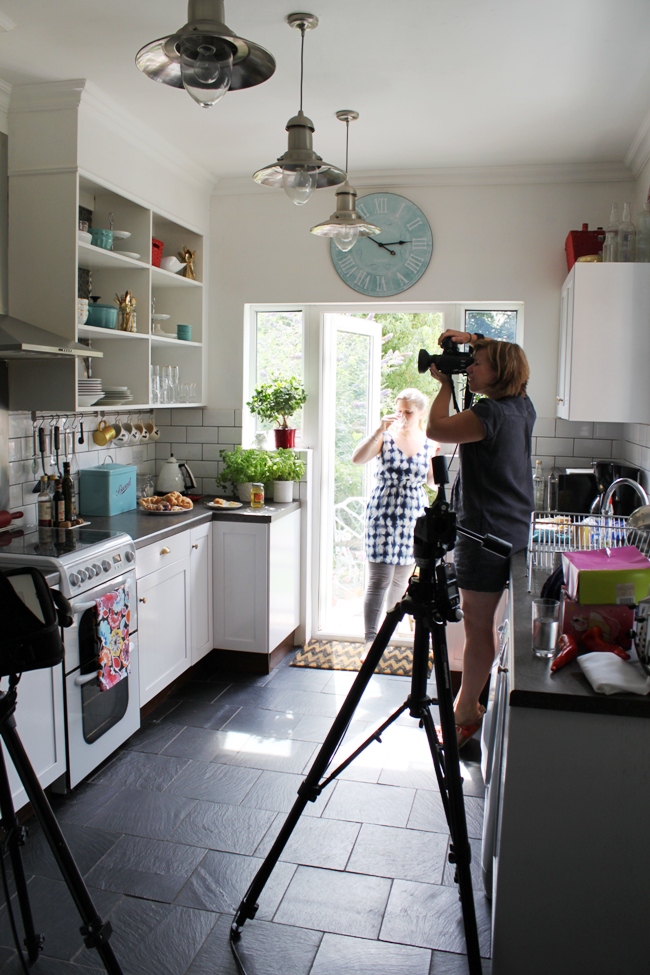 My patio has never been professionally photographed before but as the day wore on and the sun disappeared, we were all a little worried that it’d begin to rain.  Thankfully, it held off long enough for Emma and Joanna to do their thing although big threatening clouds were hanging around above us. 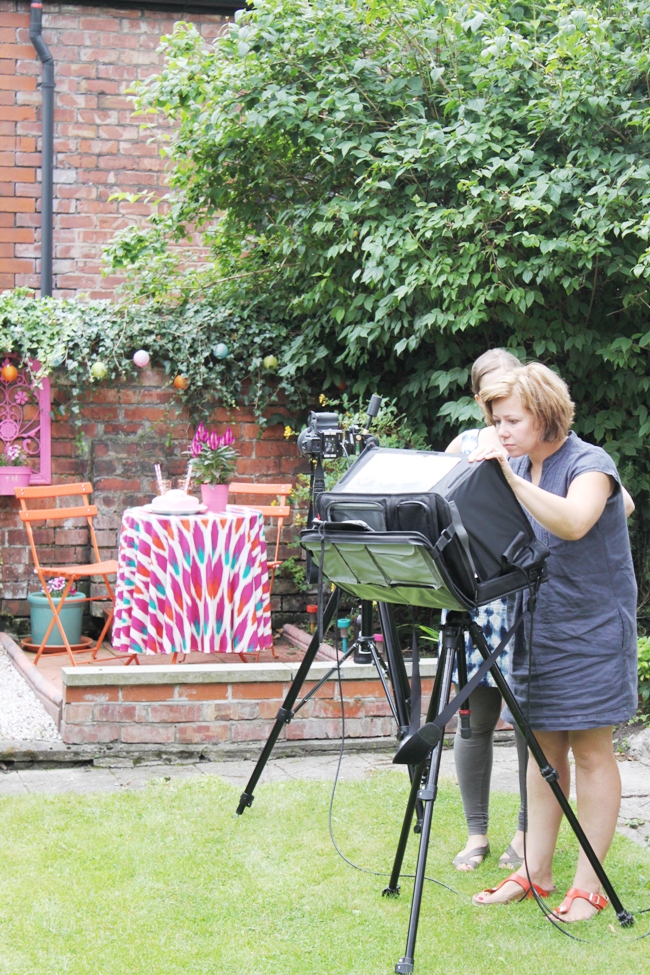 Joanna had brought this huge fabulous French Fancy in as a prop – it looked so cute with my vintage glasses and plates. 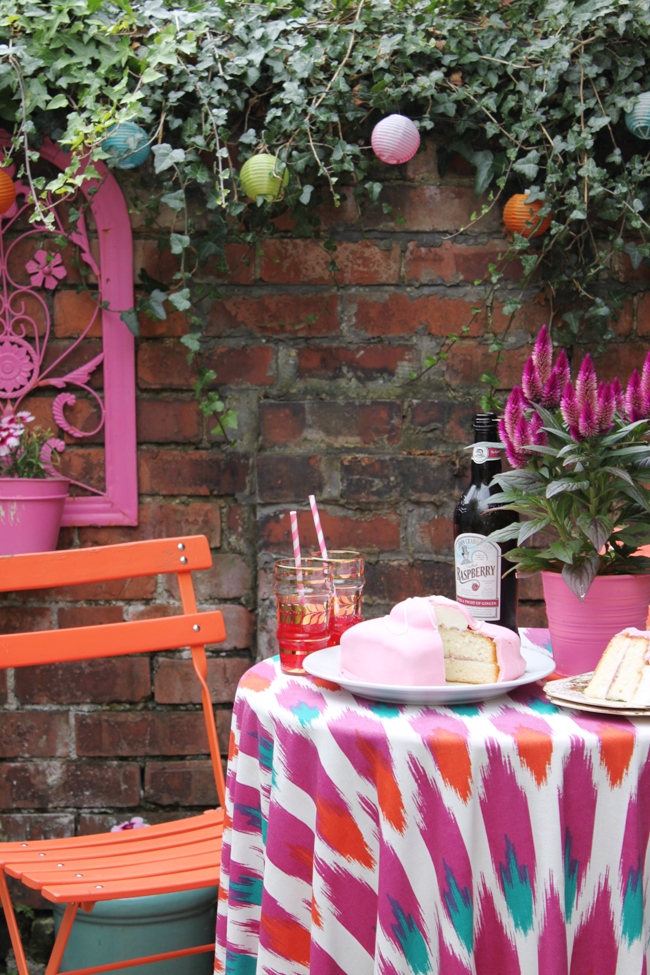 I have to admit, I was relieved when it was over.  I’d spent the last month worried about what the place would look like when they got here – would the bathroom be done?  Would we still have plumbing bits scattered all over the floor?  Would the whole house be covered in a thick fog of dust and rubble when they turned up?  Would my brain explode from the excitement?  But I’m happy to say everything went just fine on the day and the final pictures looked wonderful. 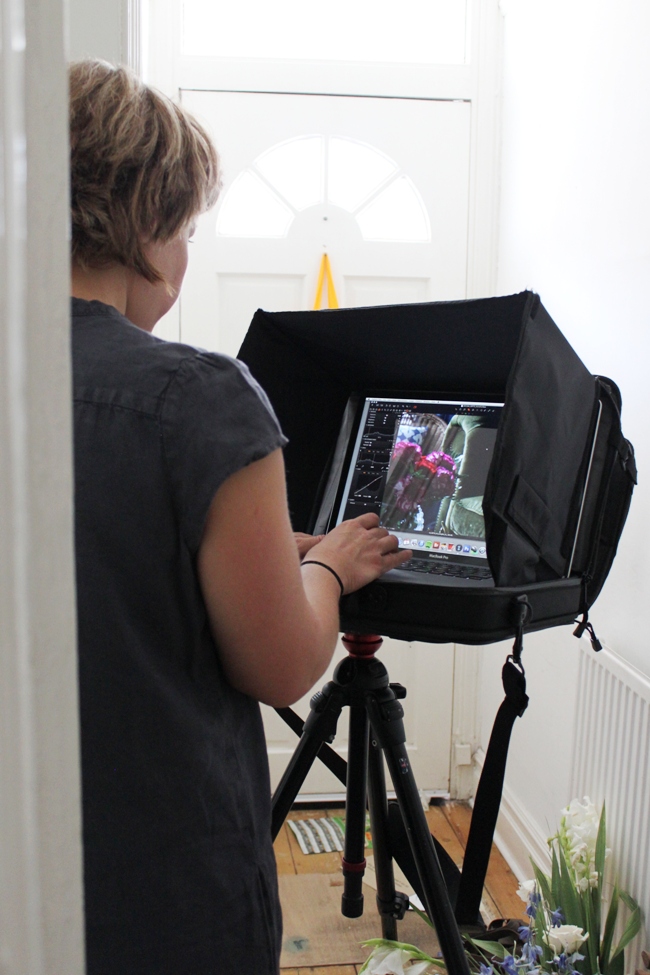 As soon as I’m allowed to say more, of course I’ll reveal all!

In better news, I’m so behind on my posts that I’ve actually got lots to share with you so I do hope you stick around.  In the meantime, have I destroyed your dreams that everything is perfect when you look at those gorgeous photographs in books/magazines/interwebs?  Ever iron your bedlinen?  Do you have a cleaning lady that you swear by?  Reveal all, promise I won’t tell ;)