Operation Bathroom Remodel: The week that was…

Long ago, in my little naive brain, I actually thought that by this time, the bathroom would be just about done – ok, maybe a few bits and pieces would remain but with Wayne having the entire week off work to make some great progress, what could possibly go wrong?

Excuse me while I point and laugh at my naive self.

You’d think we’d been in this DIY game for long enough to know the one single truth about DIY:  That it will always take longer and be more expensive than you think it will.  I mean, how many episodes of Grand Designs do I need to watch to have this fact embedded deep within my feeble brain?  Apparently not enough.

We have made progress of course – and we’ve actually made more progress than what these pictures are going to reveal because of all the work behind the scenes – particularly the plumbing which was probably the hardest part of the work so far.

Here is the week that was…

This past week has seen temperatures soaring to nearly 30 degrees every day – I mean, this JUST DOESN’T HAPPEN in Manchester.  So poor Wayne was working in a ridiculously hot tiny room which isn’t all that conducive to productivity when sweat is pouring in your eyes and you can’t even splash cold water in your face because the water has been shut off in the house to work.

Regardless of the heat, Wayne removed the false wall and started on moving the plumbing for the shower from the right side wall to the left.  He also did some plastering, fixing the area around the window and around the ceiling, dug out the plaster around the plumbing near the sink and shower so he could get to the pipes and installed the new thermostatic shower.  The old bathtub had to be removed to get the work done and then put back in so we could use it! 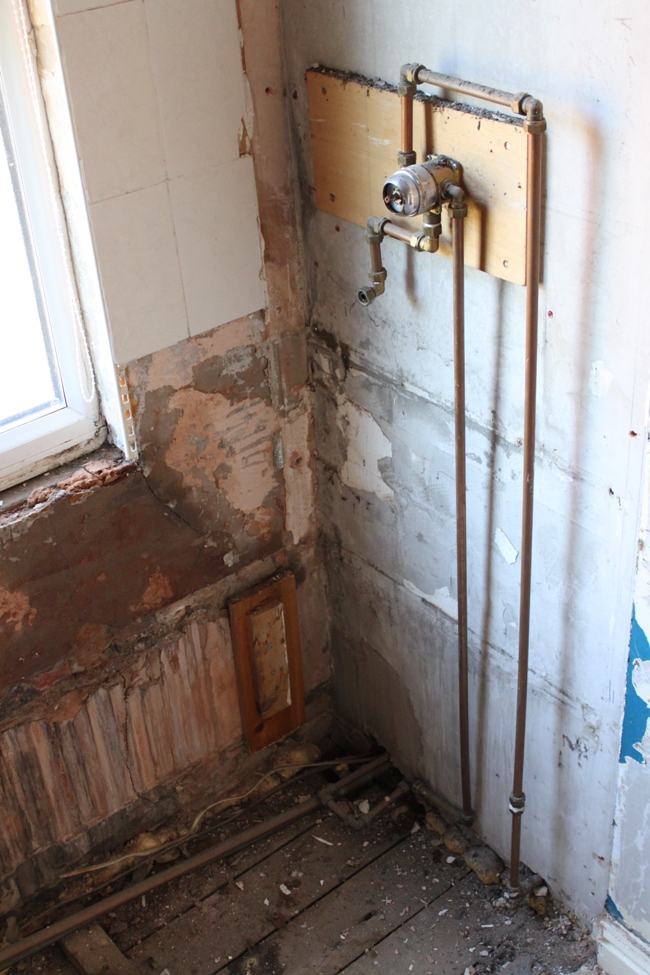 The bathtub removed and plumbing work that needed to be tackled… 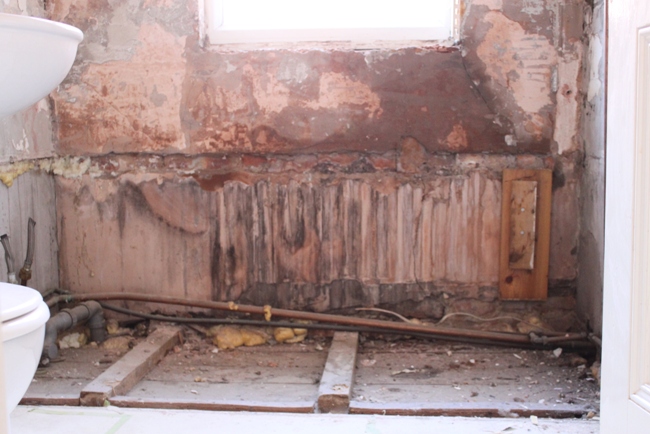 The plastering and new shower installed… 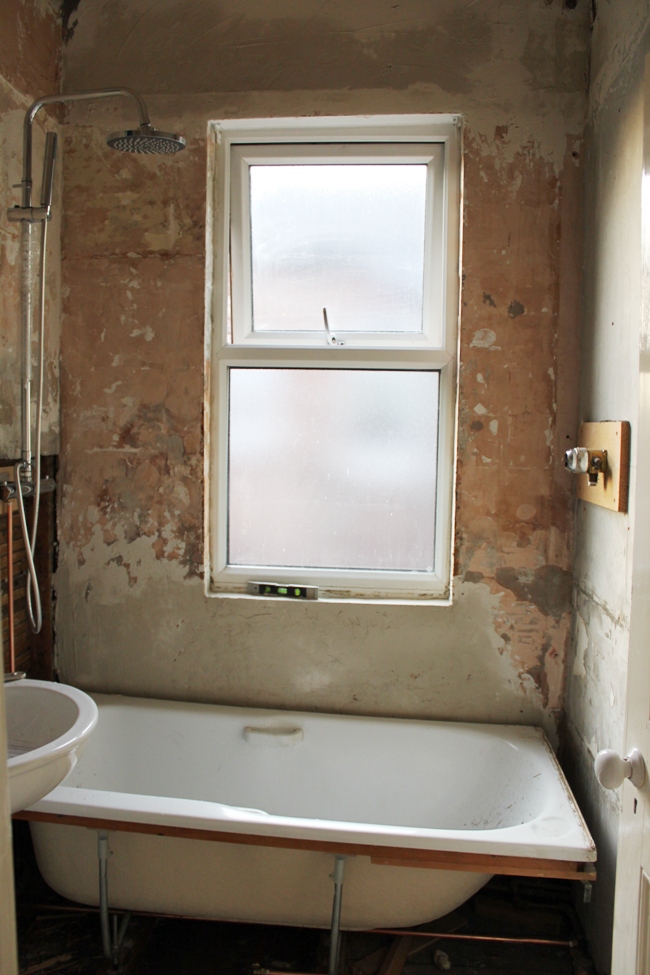 On Tuesday, we had to say goodbye to our gorgeous Senna.  He took her to the vets in the morning on Tuesday and then had to keep on working when he got home.  Wayne got Senna as a kitten when he was 27.  He’s now 40.  Senna was his baby long before I came along and having to start trying to figure out which fitting worked best for each part of the plumbing puzzle isn’t best performed when dealing with the grief of losing a beloved pet.  Regardless, more work was carried out but you’ll have to forgive me for not getting pictures – I just wasn’t in the mood and the bathroom seemed the least important thing in the world despite our sink looking like this… 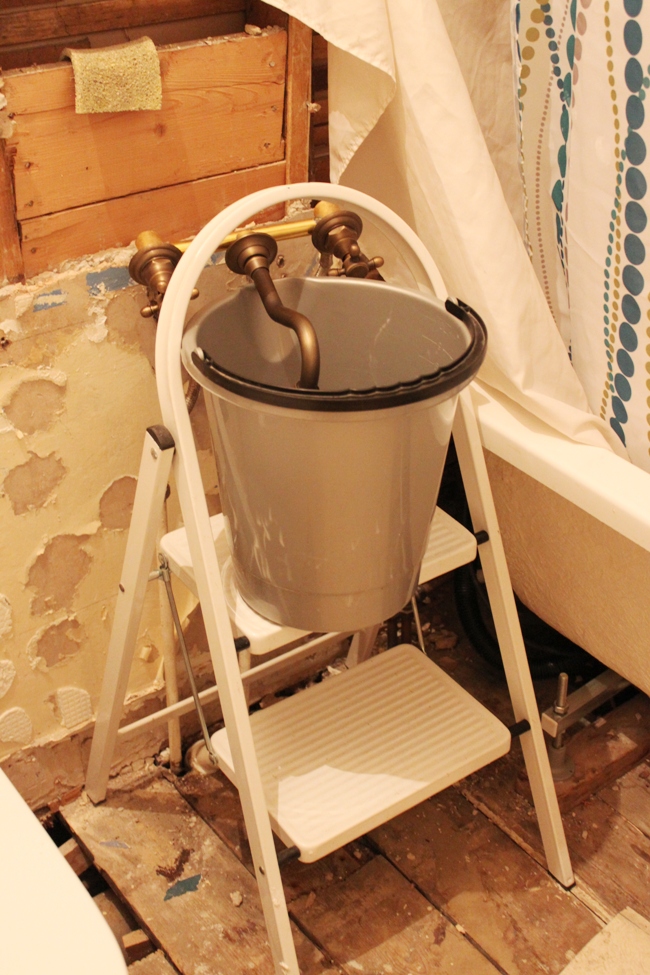 On Wednesday, he started to feel ill.  We don’t know if it’s because of the heat or because he had been working with the sewer pipes (errghh) or a combination of both but he lost nearly a day for feeling completely like crap.  Despite this, he did manage to swap out the toilet and bathtub and getting the skip we’d ordered filled up with the old suite and all the rubble so he had some more room to work.

Thursday, he was back at it and made some decent progress but it meant working from 8am until 10pm to see if he could catch up on all the time that’d been missed.  It was mostly plumbing work that was carried out this day and realising that the bathtub wall tap we got from Victoria Plumb was a piece of shit and couldn’t be used as there was no way we could get fittings for it despite spending a ridiculous amount of money and endless trips to B&Q trying desperately to make it work.   It was the only thing I purchased from them and it’s really turned me off to using anything else by Victoria Plumb.  Just a warning, there.  We’ve had to order another one but I’ll get to that later… 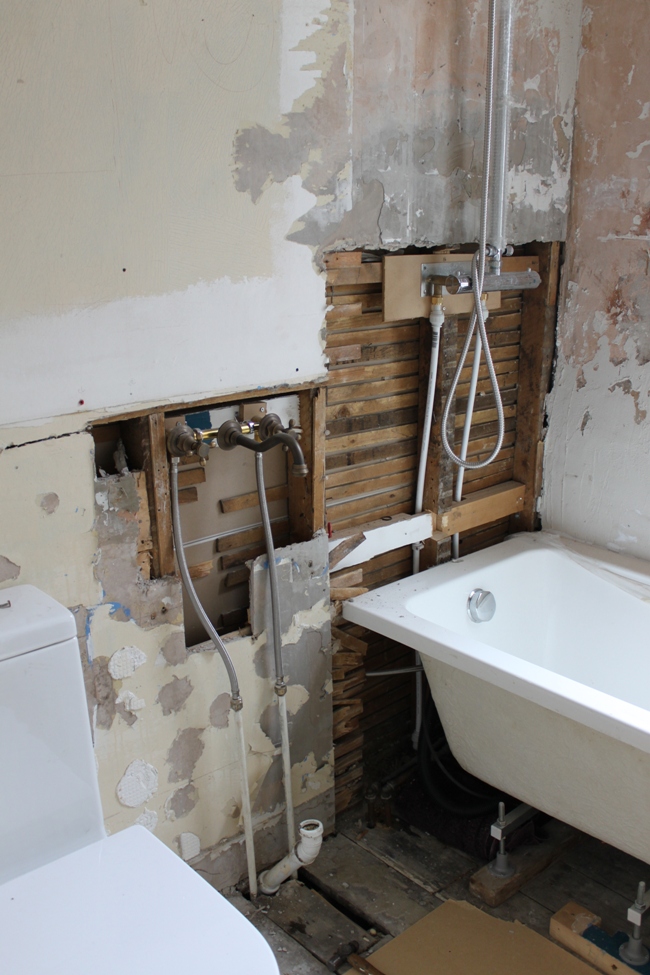 Friday, I had taken the day off so we can go see The World’s End.  We did a pub crawl on the way home from the cinema in celebration of the film which we loved and had a much deserved day off, chatting and laughing and recalling all the funny things Senna did.  That afternoon was a little like a celebration of her life and I think we both needed that.

This weekend, the work started again, this time with me being able to help a bit more.  The plumbing work was finally completed (except for the bathtub wall tap) and finally NOTHING WAS LEAKING.  I got a coat of paint on the ceiling, we got plasterboard up around where the walls were removed and the sink tap was secured in place.  We also got some hardboard down on the floors ready for the flooring to go down. 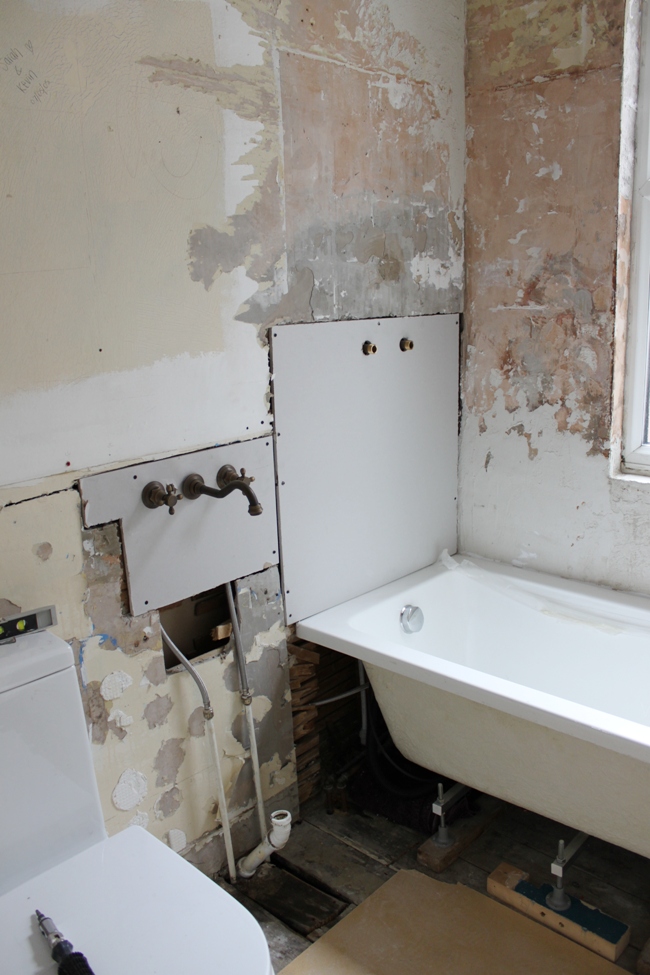 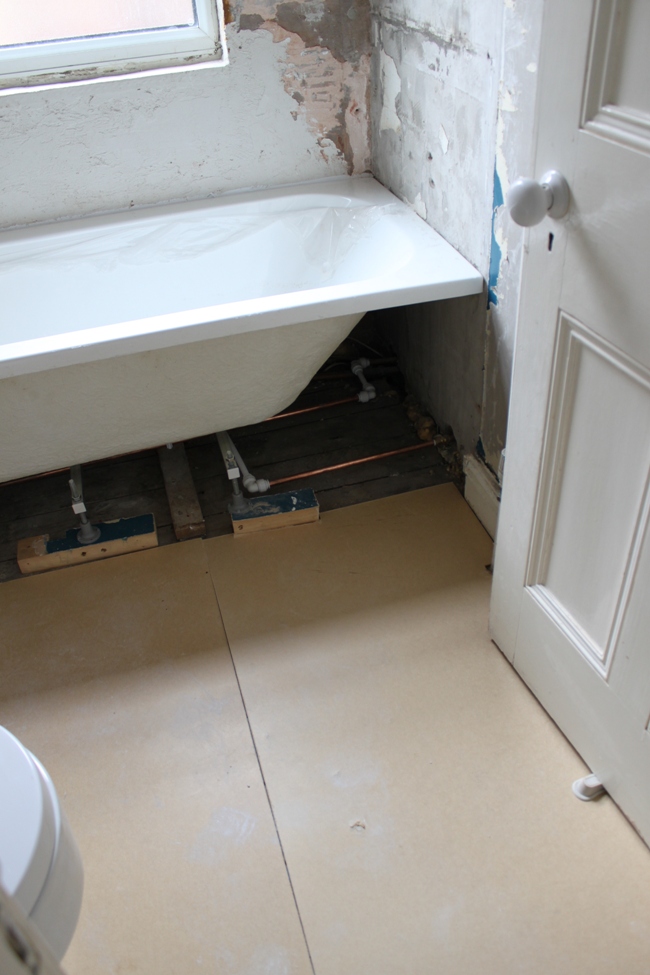 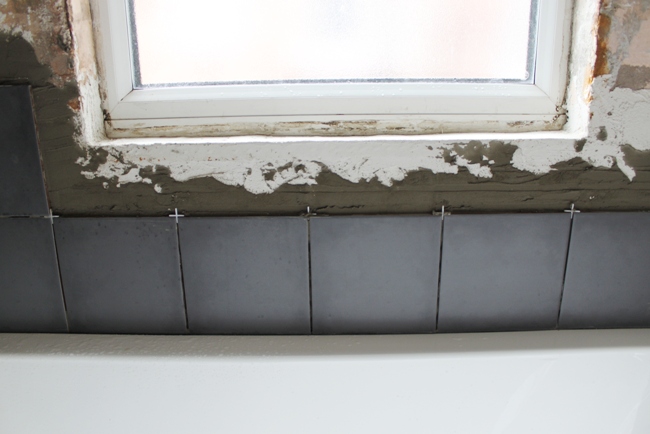 We only got a single row of tiles done but we’d put a layer of seal between the bath and tiles so that we could take a shower without worrying about water running down the wall.  Obviously, we still need to grout and seal here properly but it’s a first step.  The plaster added behind the shower was covered in a plastic sheet so that it doesn’t get wet. 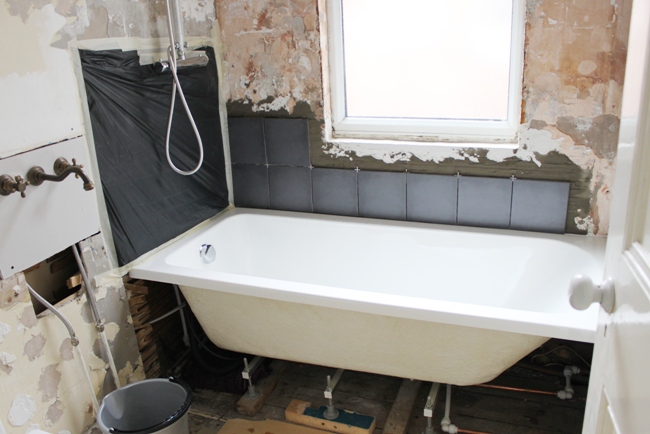 So, despite it looking like the bathroom is still in complete chaos – and it kind of is – we’ve got a working shower, a working toilet and sink taps that work despite not having a sink!  The walls are pretty much ready for tiling and the flooring is nearly ready for tiling.  All the plumbing work is done but we’re going to leave a ‘hole’ in the tiles around the one side of the bathtub for the wall taps that we’re now waiting for delivery on.  Considering everything, we have not had a single day where we couldn’t get a shower or use the toilet.  I would consider that a success in itself.

Now, as a lot of people are asking me about my sources, I wanted to take this opportunity to introduce you to one of the sponsors of our bathroom remodel.  Bathrooms.com were lovely enough to work with me on this project.  Seriously, these guys ROCK and I couldn’t recommend them or their products highly enough.  We got the Hawksmoor bathtub, the Meyer close-coupled toilet, and the Bryant thermostatic shower kit.  We got a few other things as well but I’ll share those when we have them installed so you can actually see them!

Our new toilet with NO PIPEWORK SHOWING.  Happy Days. 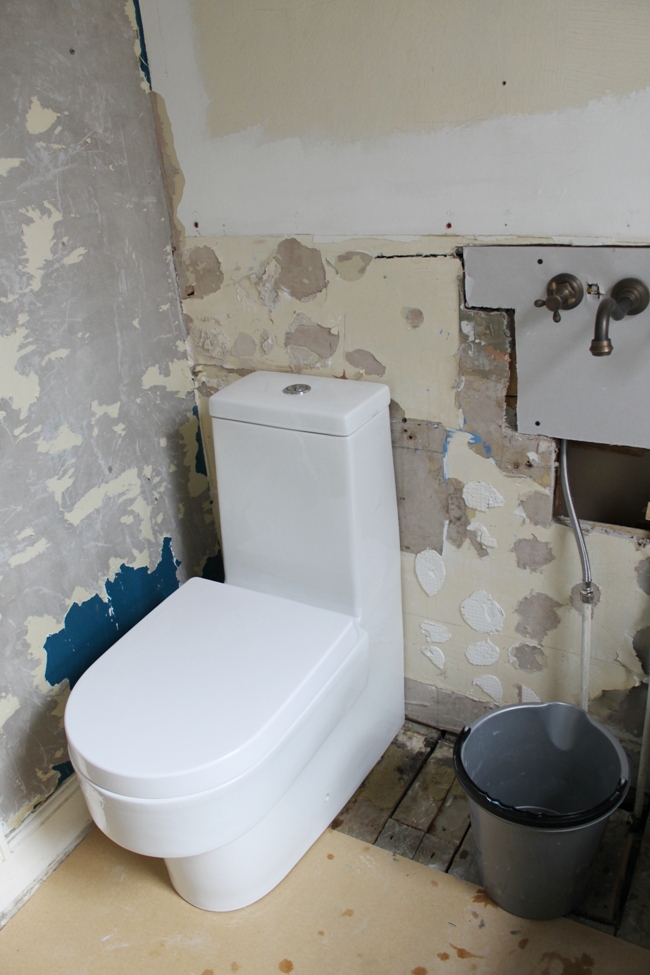 Everything they sent through worked fantastically and was good quality (unlike that other retailer I spoke of earlier!). Before the items arrived, they called me to ensure everything was exactly what we needed, checked their stock to ensure it was all ready to be sent and their delivery guys called to set up the day and time of delivery.  They delivered bang on time and the delivery guys were friendly and professional.  The whole process was dead easy.  Seriously, I can’t fault them in this process at all.  It’s been a pleasure working with them on this.

Look how much better the new bathtub fits!  That extra 10cm makes such a difference – it’s the little things, eh? 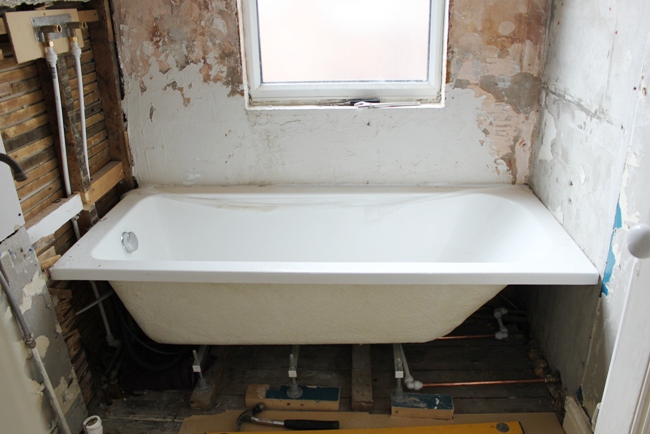 And despite having a bathroom that looks a mess, I am absolutely in love with our thermostatic shower already which regulates the temperature of the water flawlessly.  That big fat showerhead makes you feel like you are in a gorgeous downpour.  Heaven. 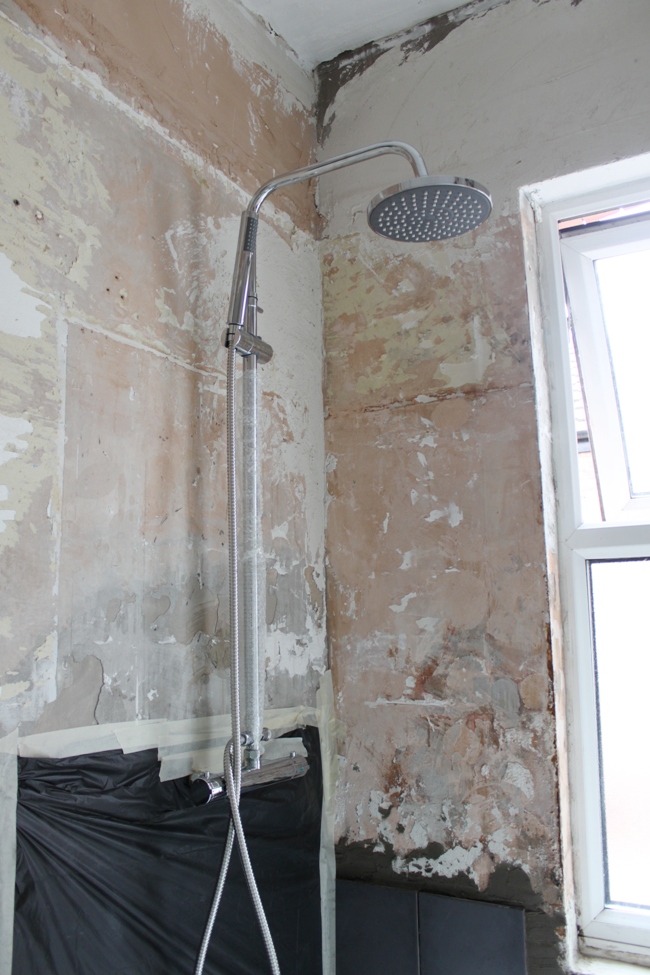 One other source I figured I’d mention is the wall tap for the sink.  We took a chance by ordering from eBay from China.  It took about 3 weeks to get to us but the quality is great and it was easy to fit. We decided after the madness of not being able to fit the bath tap from Victoria Plumb, that we might as well order another from the same eBay seller in the same design for the bathtub as the size would still work just fine for a bath.  We’re just waiting to get that in now!

So that’s the week that was supposed to see our bathroom remodel nearly finished and as you can see, we’re not really there yet.  I hope you aren’t completely bored of this project (and if you are, I can’t blame you – I want to see pretty too!!) but we’re still getting there, I promise!  Oh, the joys of DIY, eh?

The items from Bathrooms.com were provided to me at a discount for my review but all thoughts, experiences, opinions and words are entirely my own.