So I as teased in a few posts, I’ve been involved in a little ‘design’ work on the side for a charity called The Albert Kennedy Trust.

I first read about the project back in late February on Andrew Dunning’s blog where he talked about his firm’s involvement in the London arm of this amazing initiative.  All he had to say was that there was a similar project that was soon to take place in Manchester and I knew I wanted to get involved somehow.

But before I get into my own involvement, you might be wondering what the Albert Kennedy Trust is, what the Purple Door Project is and why exactly I wanted to get involved.

The Albert Kennedy Trust (AKT) is now in its 23rd year and it’s a service that supports young Lesbian, Gay, Bisexual and Trans (LGBT) people who have been forced from their homes because of their sexuality, offering shelter, mentoring and care.

The Purple Door Project is a ground-breaking housing initiative – the first of its type – especially for LGBT young people between the ages of 16 and 25 who have been forced from their homes and are living rough or are living in hostile environments.

The project consists of two housing initiatives, one in London and one in Greater Manchester.

AKT Chief Executive Tim Sigsworth said: ““Despite ten years of progressive legislation which has enabled young LGBT people to feel more confident to come out at an early age –we are still seeing several hundred young people each year coming to us facing issues such as homophobia, biphobia, transphobia, domestic violence, forced marriage and bullying.

“Mainstream housing services do not provide the focused, comprehensive and tailored support that these young people need, and demand for our services has risen by 30 per cent in recent years.  With the launch of Purple Door, we can now help more of these young people and we are immensely grateful to our partners, donors and supporters for making this day happen.”

In Greater Manchester, AKT has worked in partnership with Threshold and the New Charter Housing Group to open a four-bedroom 6-12 month supported housing project, which is the first in the northwest exclusively for LGBT young people.

While Andrew’s firm APD assisted with the interior design scheme of the London House, when I spoke to the charity, it turned out that they didn’t have any help of the same kind for the Manchester house.  While I’m obviously not an interior designer like Andrew, I was happy to volunteer and hoped my experience and DIY skill set might lend itself in some way to make this refuge a welcoming home for these young people.

You might wonder why, as a heterosexual, I wanted to get involved.

Well, some of my very best, very closest mates in the whole world – people I consider practically family – are gay and lesbian.  Their stories of coming out to their friends and family and the stories of those I’ve met through them are harrowing at times.  That such prejudice and ill information still exists today is testament to the fact that there’s still work to be done in educating people about the LGBT community:  that they are human, that they want to be loved and share that love, that they have every right to carry on a relationship with whomever they wish without the judgement or prejudice of others just the same as you or I do.   It’s something I feel incredibly strongly about.

So, over the last couple of months, I’ve supported the project by creating mood boards, providing advice on sourcing items, recommended paint colours and furniture and got in touch with a host of companies to see if I could get donations of much-needed items.  I even hung the wallpaper in the kitchen (by myself! That was a proud day.).  The budget was tiny and the time frame was just as small.  They had a waiting list and this house needed to be done quickly.

Sadly, not every company I contacted wanted to help.  But I couldn’t have been more thrilled that my own company, Appliances Online donated a desperately needed cooker.  They also allowed me a couple of paid days off work to assist with the project.  Not only that, but the lovely people of Graham and Brown  donated wallpaper and wall art to the project which gave the whole place a young, cool vibe. 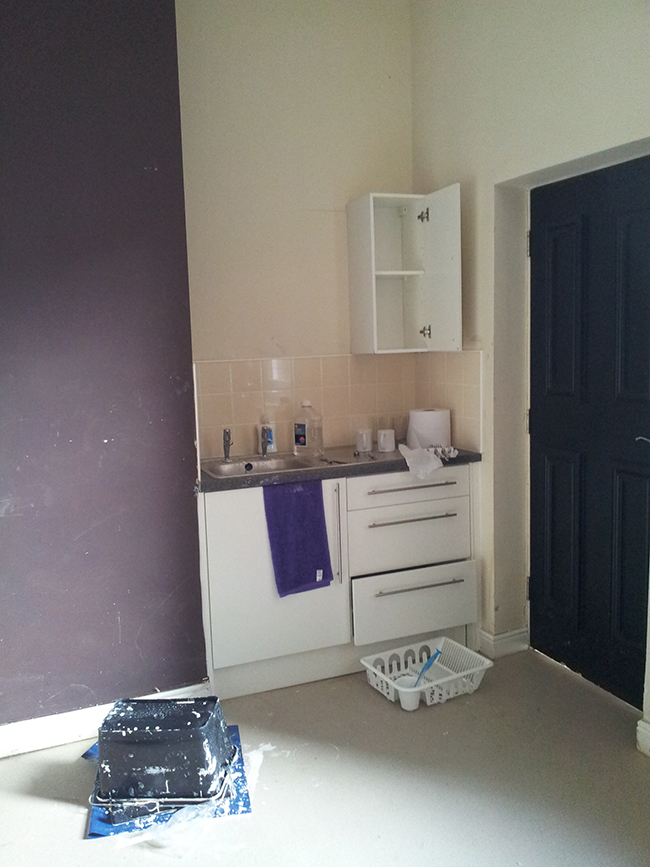 The living room is my personal favourite.  With the mood board to hand, ATK did a sterling job in creating a cosy and inviting environment for the young people while keeping things fresh and young with funky wallpaper from Graham and Brown.

Here is the before… 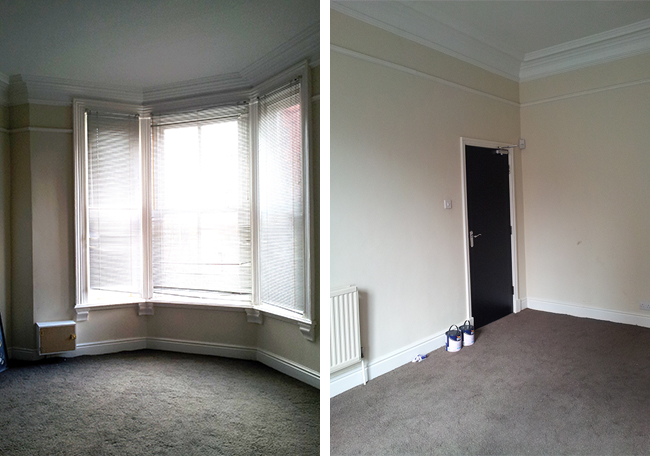 The carpet wasn’t going to be replaced as it was still in good condition but that magnolia on the walls had to go ;)  So I recommended they use the same paint colour in my own living room – a soft grey that I’m pleased to say, worked beautifully with the Graham and Brown wallpaper as a feature on the chimney breast. 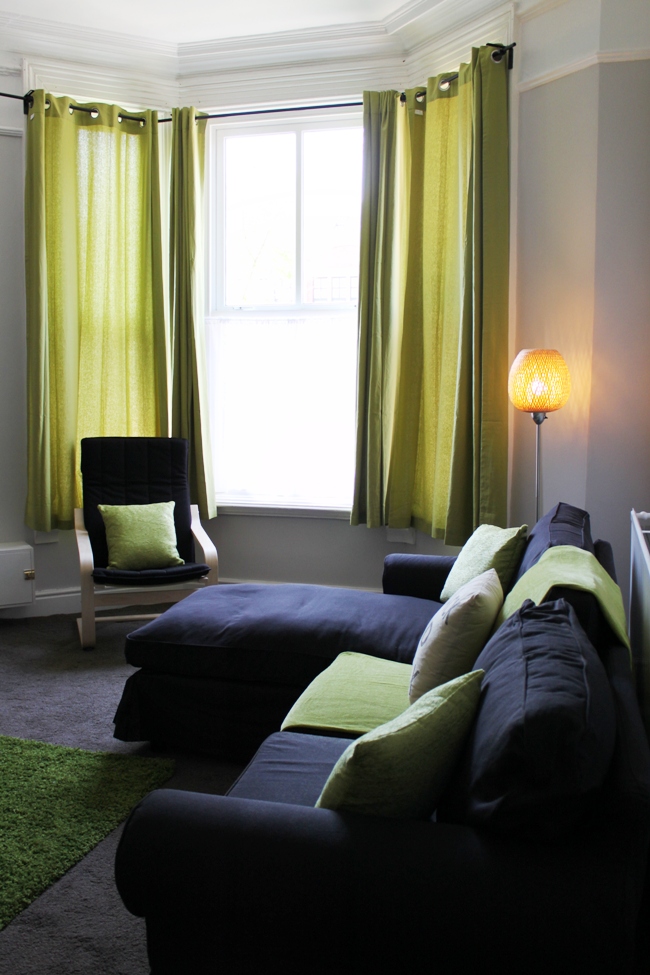 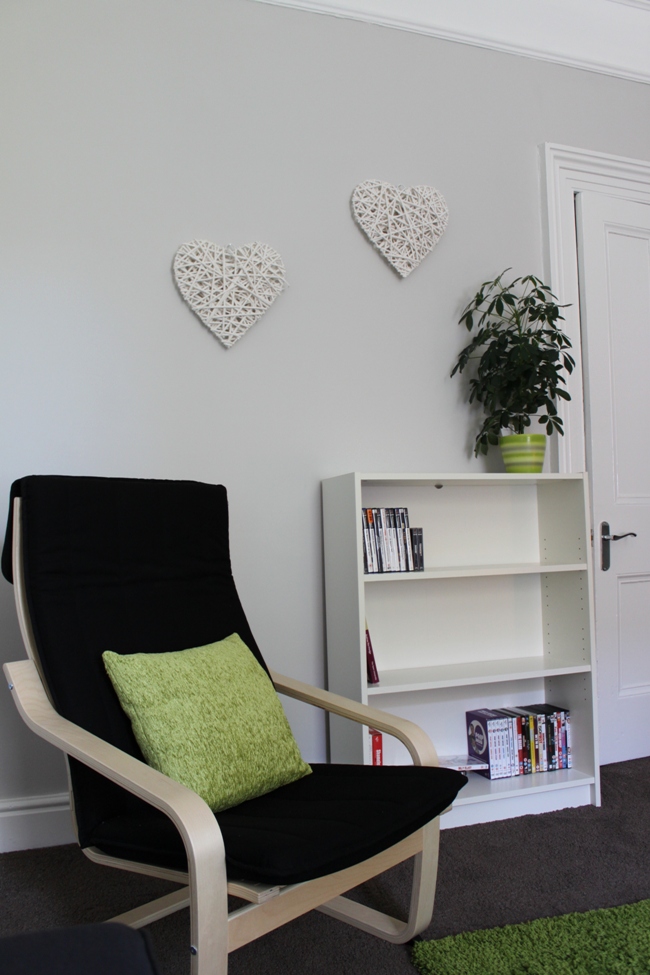 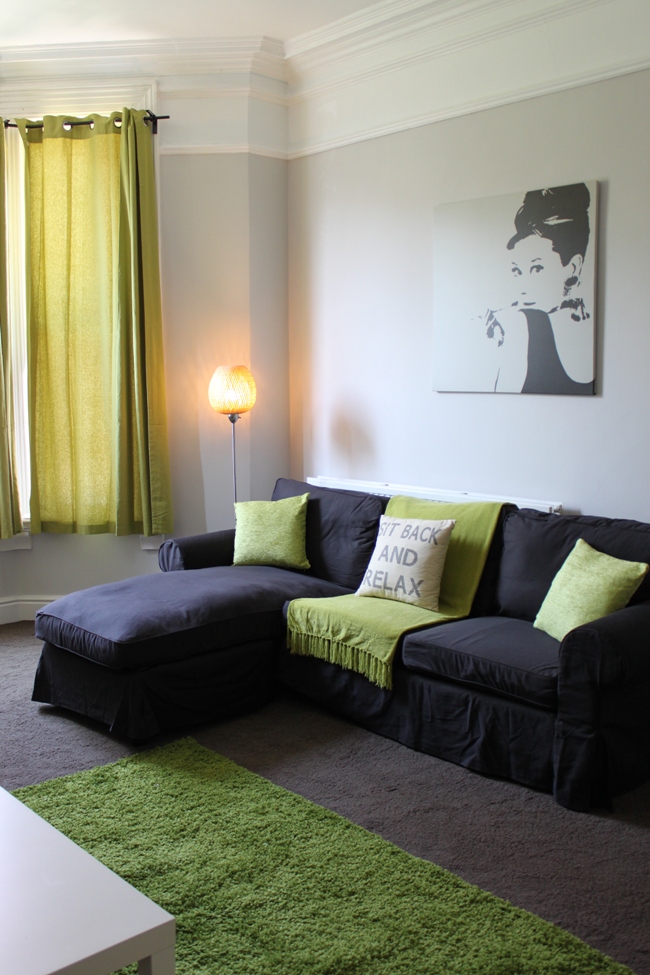 The fresh colours continued in the 4 bedrooms. 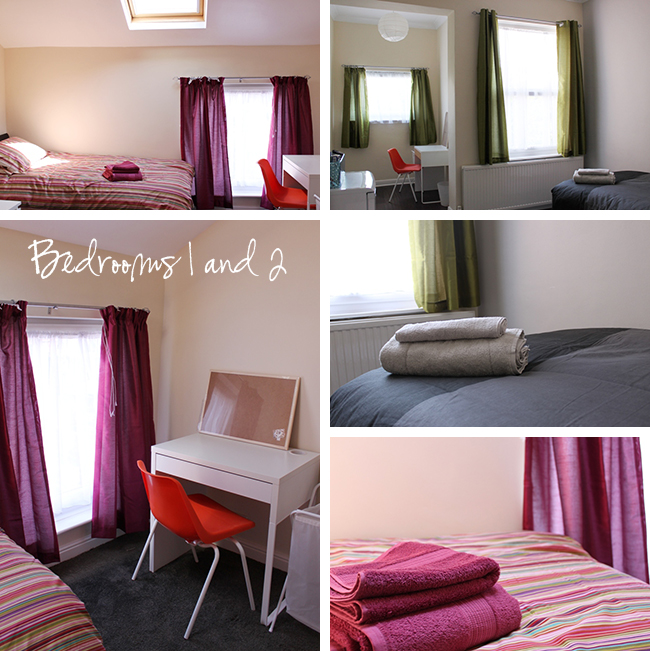 I couldn’t be more proud to have been involved in this project.  The volunteers and the charity worked so hard to make this space an incredibly warm environment to help these young people in such a short period of time with the constraints of a tight budget.

But they don’t just provide a warm bed and a lovely home.  The Purple Door project also helps young people find their way into education, employment and training, and equips them with the skills they need to live independently through a tenancy training program. 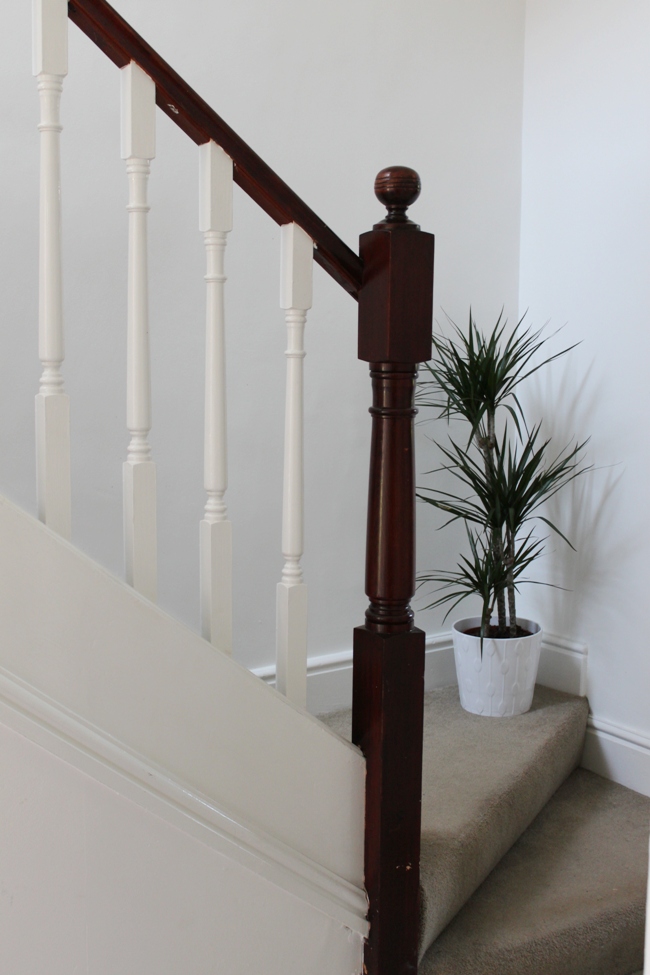 AKT Founder Patron Cath Hall has stated that the project is the realisation of a “long held dream”. 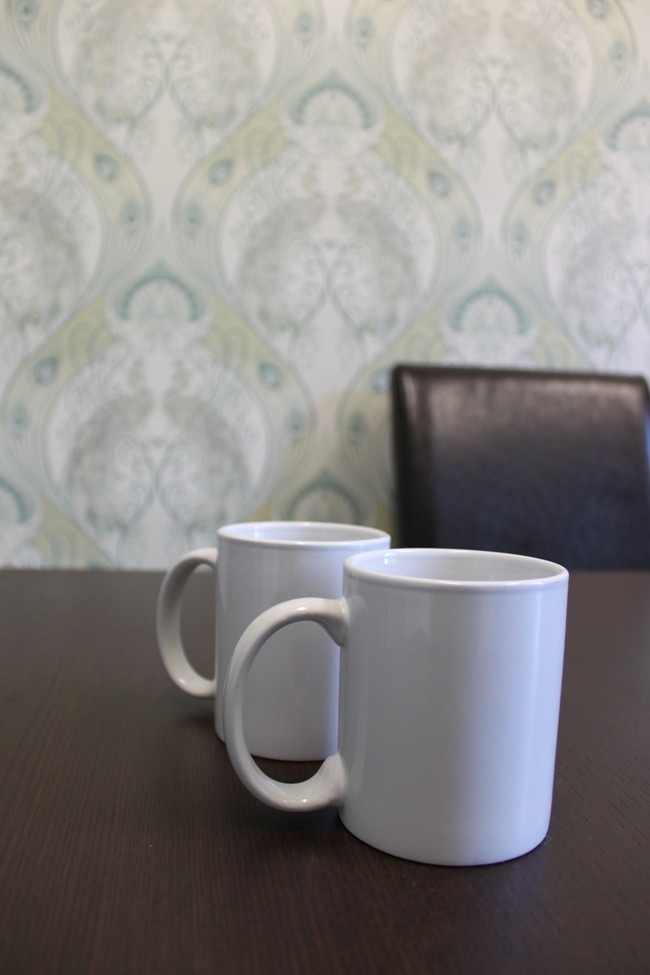 Charlie Condou, who joined the AKT as a patron last year said: “The AKT already does such incredible work with LGBT youth but the opening of the Purple Door House marks the start of a new and exciting era for us.

“We are now able to offer young homeless LGBT people immediate refuge, and this is largely down to fundraising and donations.”

The Purple Door Project has been funded exclusively through individual donations and corporate sponsorship – with no public money involved.

As a final thought… when I went to take the pictures of the Manchester house once it was completed, I met one of the young people as she was moving in.  When she asked why I was there, I explained I’d helped with some of the interior design in the house.  She gave me a huge smile and squeeled, ‘Ohhh it’s SO LOVELY!’ – I have never felt more joy and satisfaction than in that moment!

If you would like to be part of helping AKT build and extend the reach of AKT’s services to more LGBT young people facing homelessness please visit www.give15.org to donate.

If you want to see pictures of the rather fabulous London house, you can see it on AKT’s Facebook page.

You can read more about the project on AKT’s website.