I’m back from a week-long hiatus!  Goodness, how did THAT happen?  Well, Barcelona is an absolute gem of a city (the architecture alone blew my mind with it’s beauty) and I’m still trying to get my %£’^&$! pictures off my %£’^&$! phone so can’t share them just yet.  However, I have been really busy doing bits and bobs since I got back so I have loads to share with you!

First up, my front door has had a little more zhushing since my last post and I have to say, getting home and opening that door is so much nicer now (despite the fact that it leads into a hallway that needs desperate revamping – another project on my never-ending list).

The real star of the show is the new dragonfly knocker.  I had looked for ages for something a little bit different and The Door Knocker Company had so many lovely designs that it was a tough choice.  Rachel, the owner, was so cool and helpful in her emails so I just wanted to pass along a big thank you to her!  (No, this isn’t a sponsored post, I’m just a happy customer! :)) 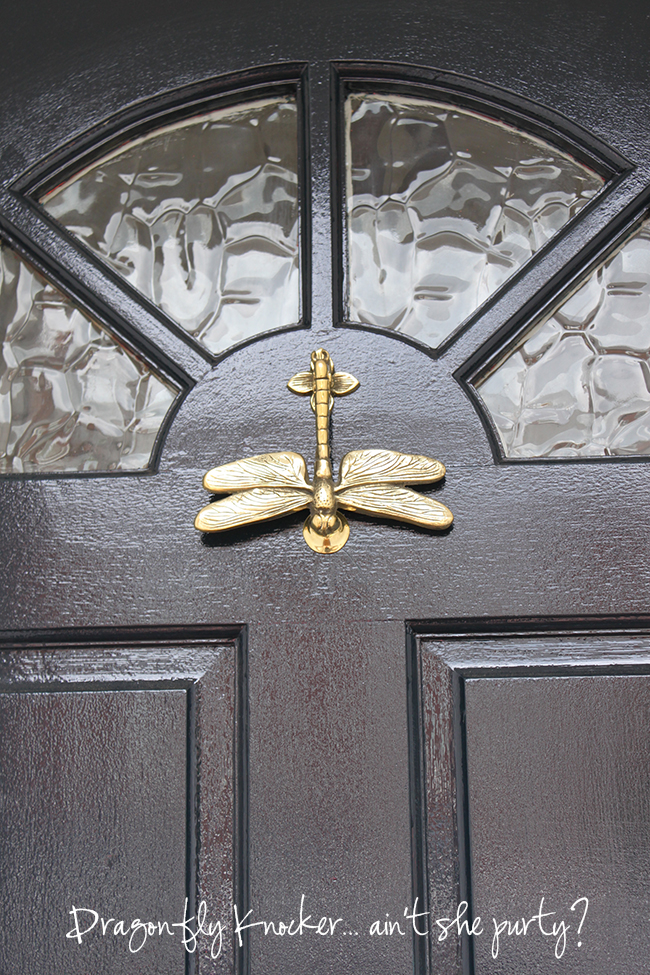 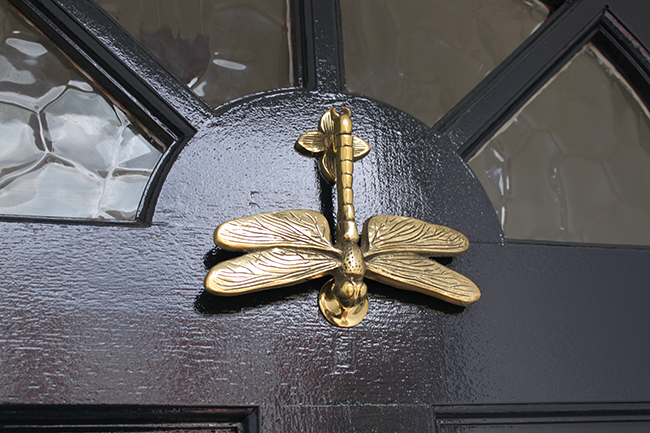 The next thing that was added was the film for the door number.  Originally we’d had the brass number on the door (where the knocker now is) but I decided that the house would look more ‘regal’ with the number etched on the transom (humour me here, people).  Phoebe of So You’re Getting Married recommended the company to me (thank you!) and it was super simple to order the film from Purlfrost which allows you to change all manner of options.  Here’s mine… 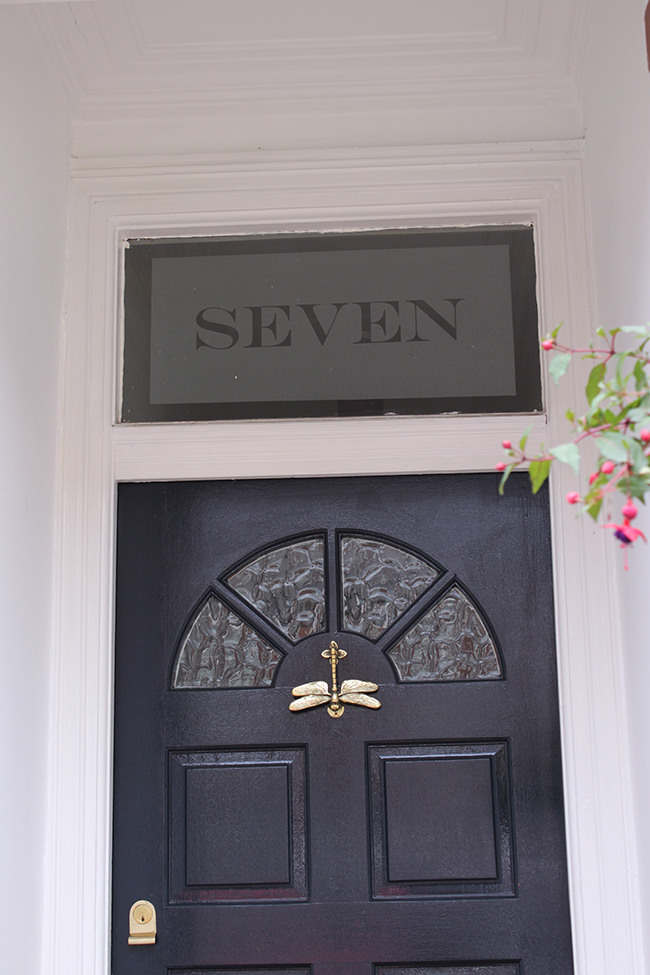 I had to get a new hanging basket as we had a bit of a drought (in Manchester, go figure) and my previous flowers died a horrible, horrible death.  This one is still finding it’s feet a bit and hasn’t fully bloomed but the flowers sure are pretty when they do. 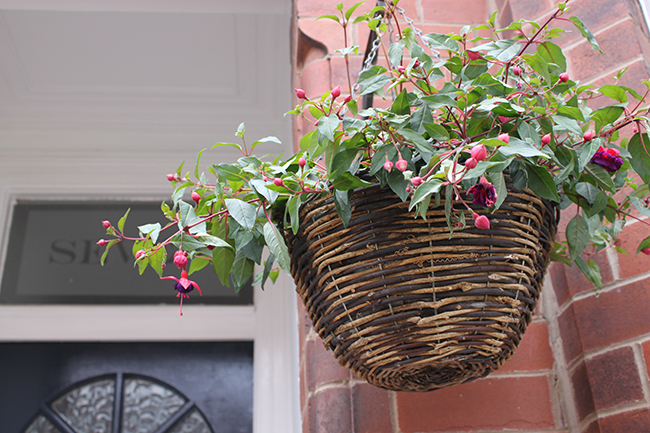 Finishing off the zhushing of the front door was a new door mat from IKEA.  I like that it added a bit of geometric pattern to the front step. 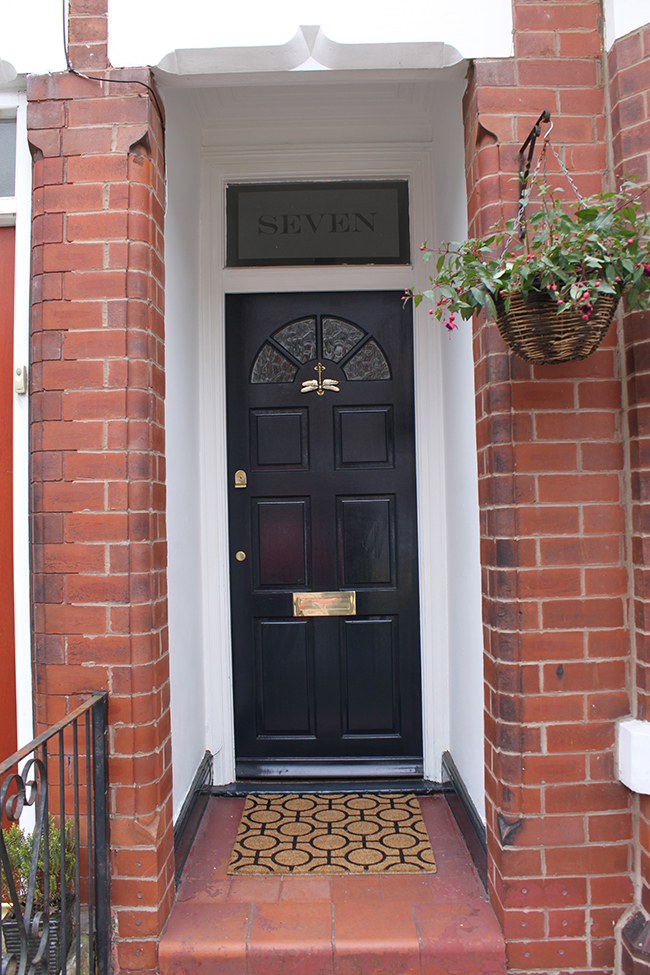 I thought it was quite nice that our window cleaner popped by the other day and commented how much he liked our new front door – and how surprised he was when I told him it wasn’t new, just repainted.  “It looks amazing!  Wow, YOU did that?!”  Erm.  Yes, yes I did.  *smugface*

So shall we check out the before and after?  Oh, go on then. 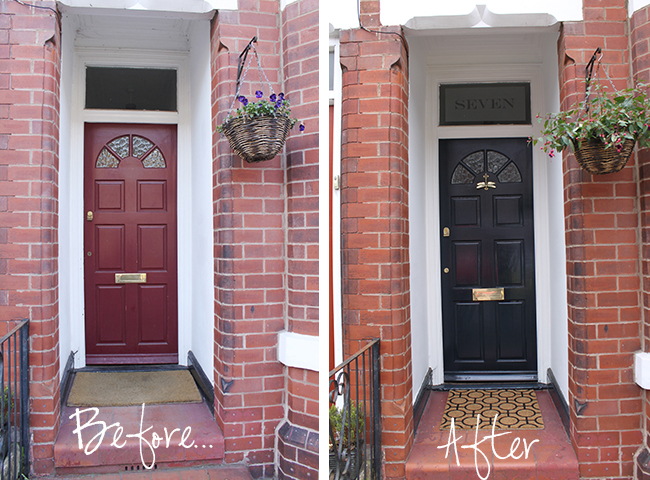 One last thing that comes with a bit of warning.  I’d ordered two bay trees from Garden Bargains recently.  They had a Buy One Get One Free offer on so despite never having ordered from them before, I figured I’d take the plunge with my £50.  When they came in, I couldn’t have been more disappointed.  One was in great condition, the other (presumably the ‘free’ one) look like it’d been trampled with a tractor and then fed to slugs.  The leaves were bitten to shreds, it wasn’t in a nice rounded shape and was leaning terribly.

I wrote them email after email asking first for a replacement tree and then for a refund.  I sent a total of 8 emails (!) with the only responses to send pictures AGAIN (I sent them 3 times to 3 different addresses with no response except, ‘We can’t find the email, can you send them to this person instead?’).  Now, I’m not one to moan about companies on this blog but after weeks of this going on, I finally appealed to Paypal to see if I can’t get my money back.  Happily, Paypal decided in my favour and I got a full refund.  Victory is mine! I’m still waiting for a response from the company on my emails by the way… Terrible, terrible customer service.  Seriously.  Stay away from Garden Bargains, they suck.

I have, however, taken the one that was in better condition and finally replanted it (I’d been waiting to replant it until I found out what was what).  It’s not perfect but I need to let it fill in a bit to get that nice bushy rounded shape I want.  So while there’s not much else going on in the front of the house in terms of window boxes, a new patio and some plant life in general (all to be done), it does give it a bit of life even at this stage. 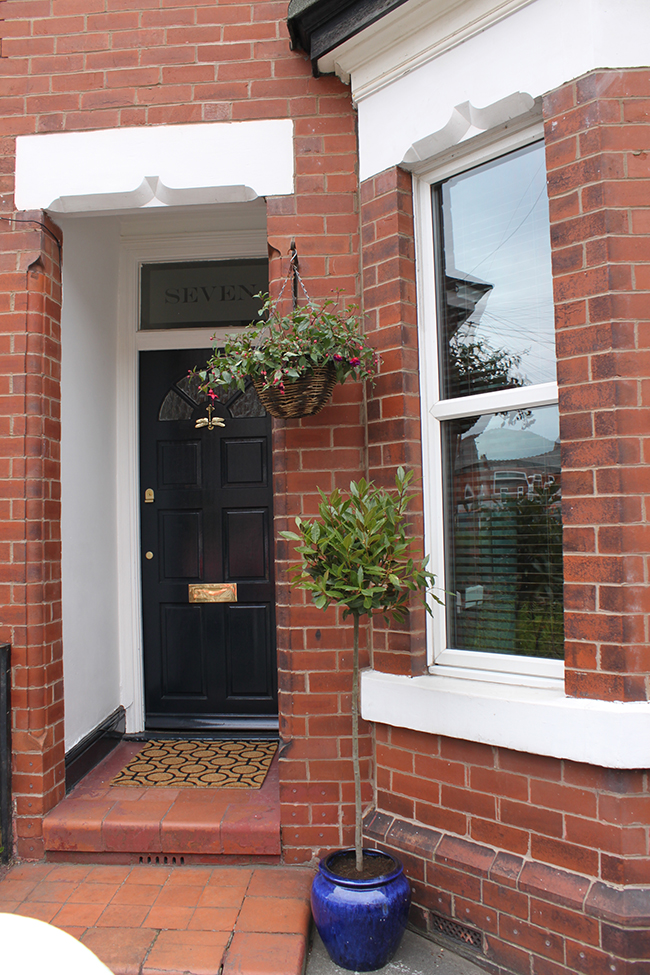 So that’s where I am in terms of front door progress.  There is still plenty to do here but Spring has been yet another let down this year with temperatures lower than average (sigh) so progress is slow.  Still, I admit, I do lock the door in the mornings on my way to work and have a little look back over my shoulder and feel pretty happy that the front of the house is starting to look more like US than it ever did before. 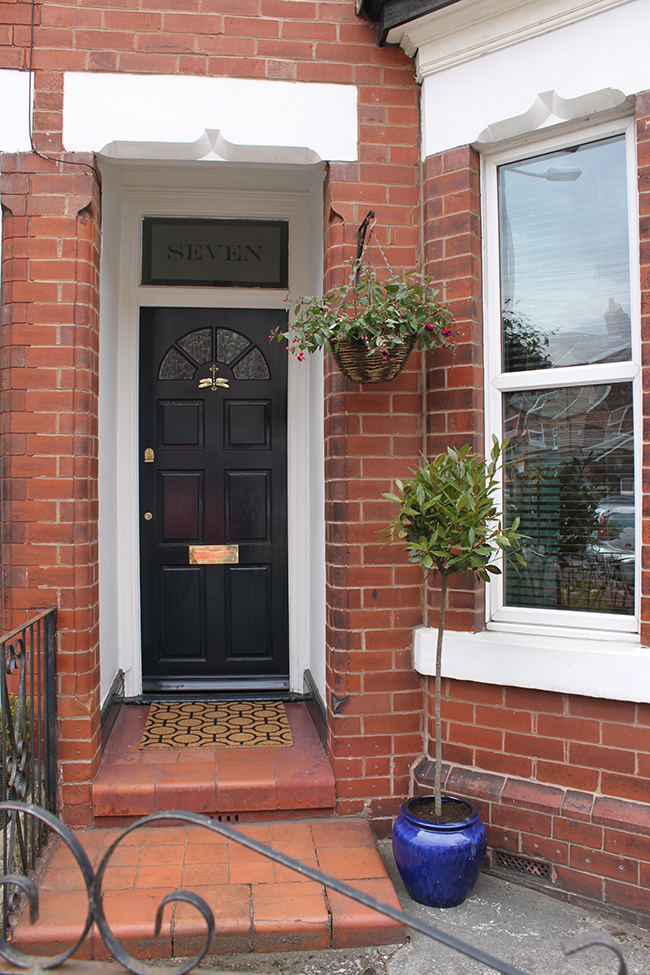 So what’s been happening since I’ve been gone?  Share, people, I’ve missed you :)