The Big Reveal: The Man Cave (aka The Cellar Remodel)

Well, my lovelies, the time has finally come.  It’s been nearly a year since I first talked about the work going on in the cellar.  There was MASSIVE amounts of prep work done over last Spring and Summer (you can see some of the work we did here to damp-proof the space and give ourselves a clean, well-lit storage area) and while the construction part of things (drywall, plaster, lighting, flooring, etc) has been completed for a good few months, it’s taken almost as long just to get the finishing touches done. 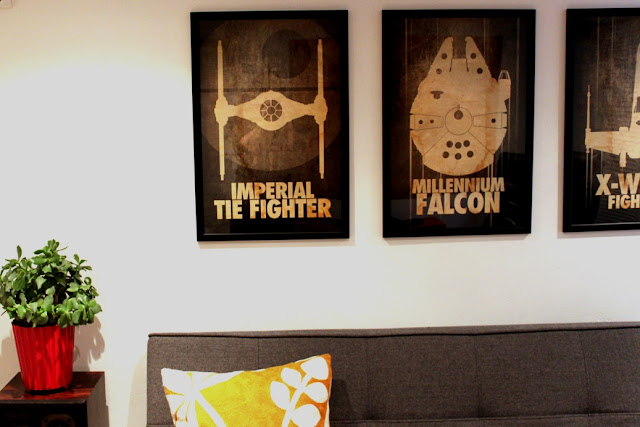 Let me start by saying I can’t take too much credit for this as it’s been Wayne’s project all along, I just helped with a few bits along the way.  I even let him decorate it himself (shock, horror) although I do admit to gently encouraging him to choose things that will look stylish and timeless for a long time to come.  I have to say, the boy done good.

Just a reminder of the before… 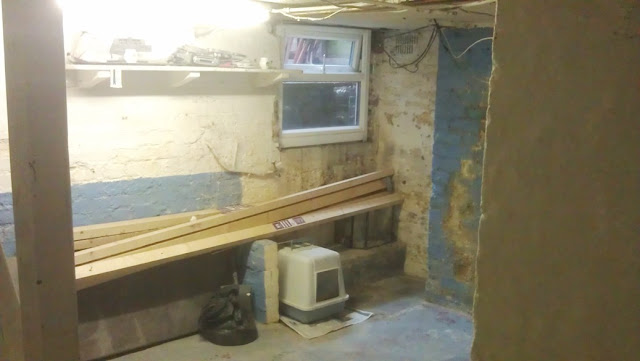 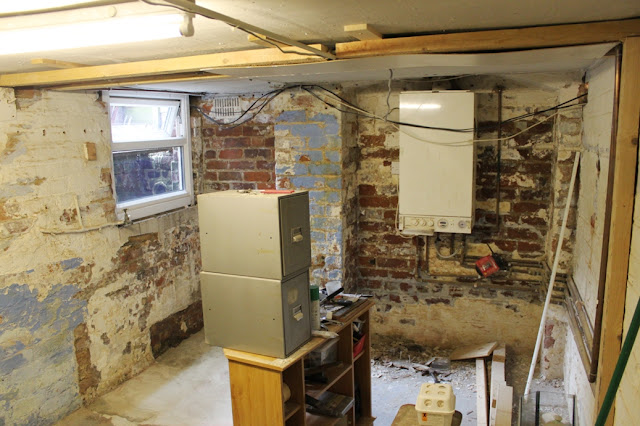 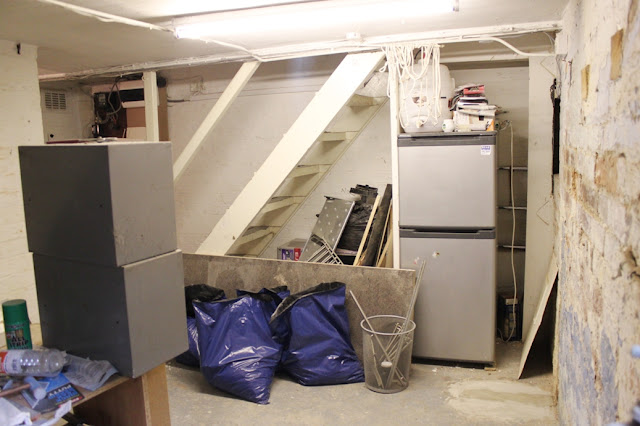 And here’s how it looks now… 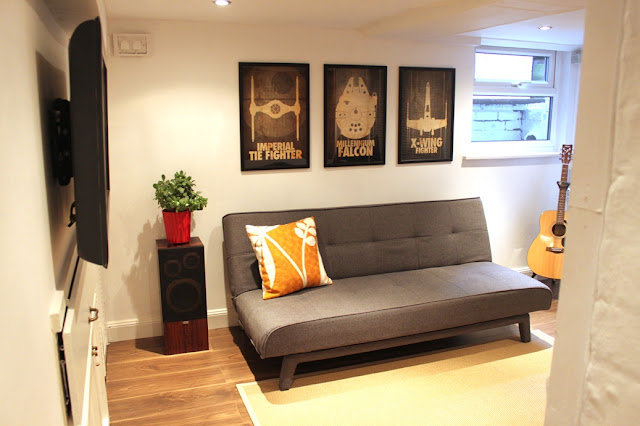 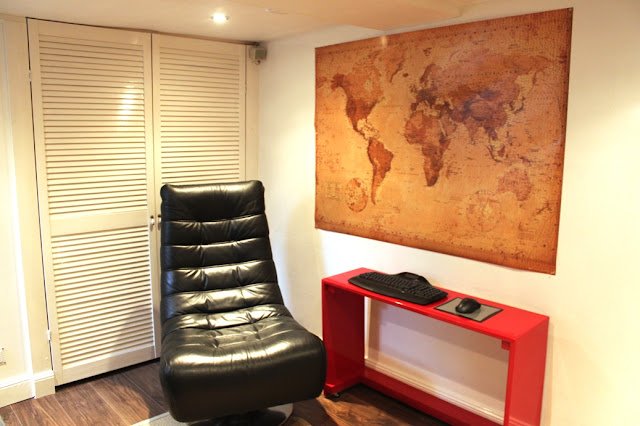 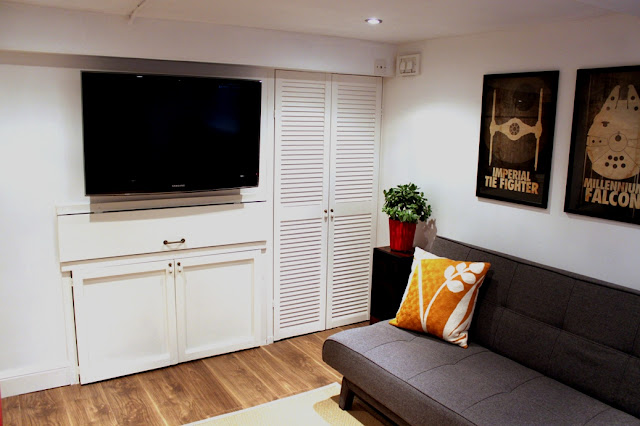 Despite the fact it’s taken so long, it was really just worked on in fits and starts – purchasing what was needed as and when we had the extra cash.  The sofa was purchased from Made.com and it’s probably – for me anyway – one of my favourite elements.  He wanted a futon so that we had extra sleeping space for guests but it needed to be small enough to fit down the stairs (so a sleeper sofa was out) but I found this lovely futon with modern lines in a gorgeous grey tweed that ticked all the boxes.  Happily, he loved it as well. 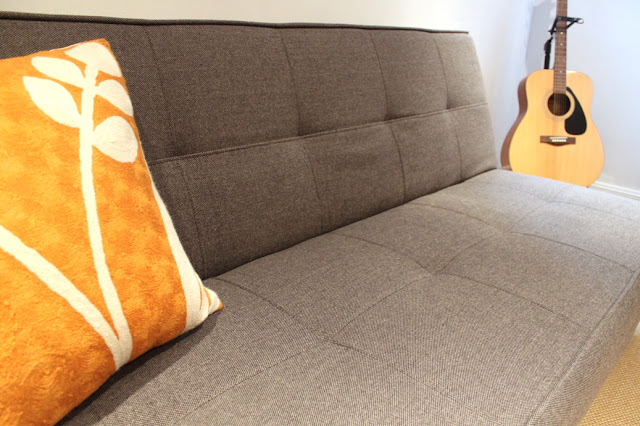 The cushion I got free from a competition that Achica ran a while back – the golden yellow works well with the other neutral elements and Wayne liked it so it came to live down here. 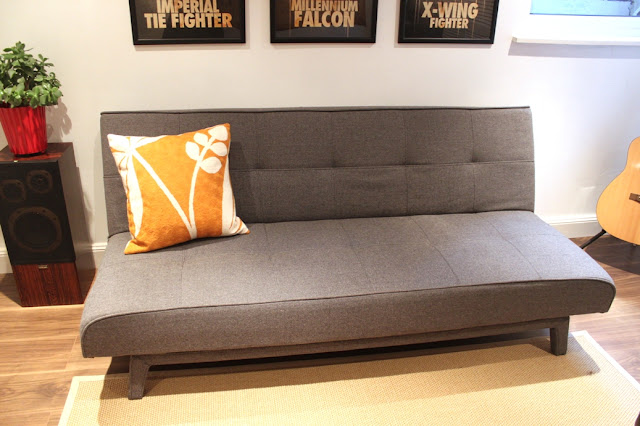 The swivel chair was originally in the living room but it makes the perfect ‘gaming chair’ for him when he’s playing his video games (and yes, in typical guy fashion, Xbox, Playstation as well as Computer gaming, he’s got it all – just cleverly hidden as I’ll show you in a minute). 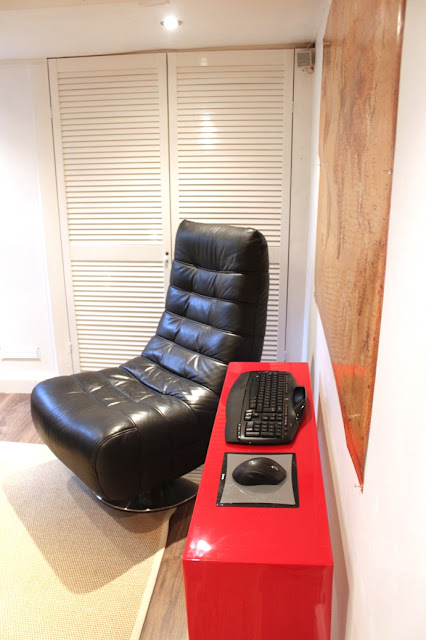 The world map was picked up for less than a fiver but we’re looking at replacing it with a full wall mural.  For now, it adds some interest to the space until we can save our pennies for the real deal. 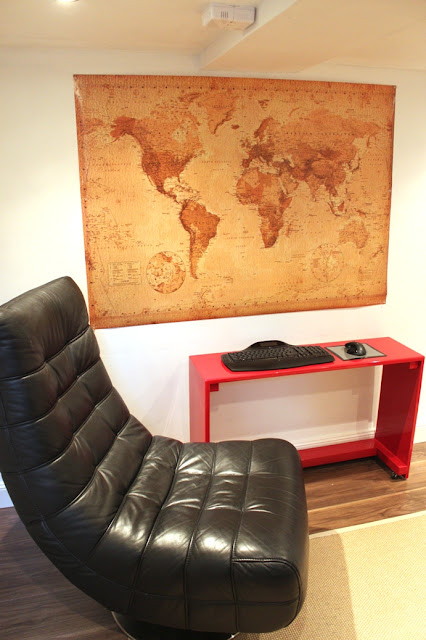 That glossy console table, Wayne built himself.  Out of scraps of wood.  Seriously.  I admit, when he first built it, I hated it.  It looked cheap and nasty out of leftover materials we had and I didn’t even take a before picture because I thought it was ugly.  That was until he took it to his bodyshop and primed and painted it a glossy red.  The thing is so shiny, you would never think it was made out of wood.  Colour me impressed with my boy’s mad skillz. 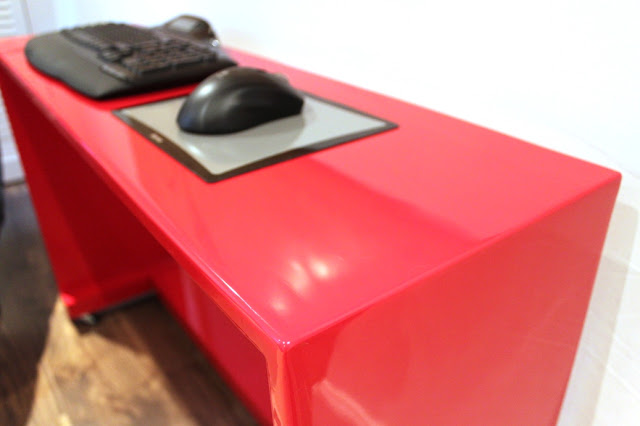 And the practical thing about it is that it’s got little wheels hidden underneath it so when he’s ready for gaming, he wheels it right over the swivel chair.  The keyboard and mouse are wireless (hurrah!!) so no trailing wires.

The prints (which were only just framed this week – despite the fact I bought them for him for Christmas – because we had to order custom frames) are a nod to his childhood love of Star Wars.  He actually chose them himself from JWC Designs on Etsy.  They are geeky, undeniably masculine, but also pretty damn cool. 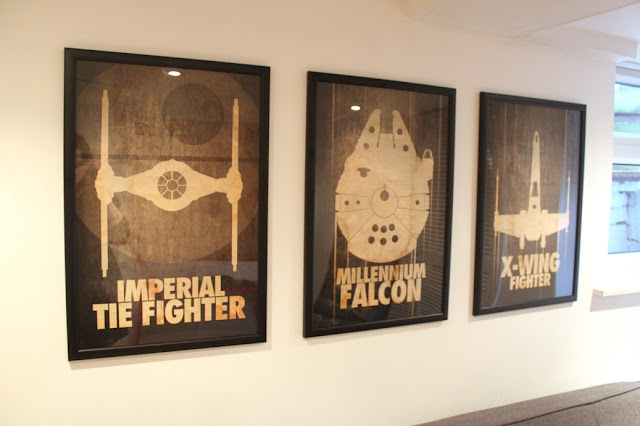 Getting back to the work that was done, you’ll see we added this rather lovely dark walnut laminate flooring.  It was practical because it floats above the concrete floor.  A damp-proof membrane sits beneath it (we never had a problem with flooding in here but it’s good practice anyway for a cellar) and the flooring was installed really quickly in an afternoon.  The EGEBY rug is from IKEA (which for some reason, is no longer on their website).

**Updated to add**  The spot lights (rescued from the kitchen remodel) are on a remote control dimmer.  So he doesn’t even have to get up to turn down the lights when the mood strikes. 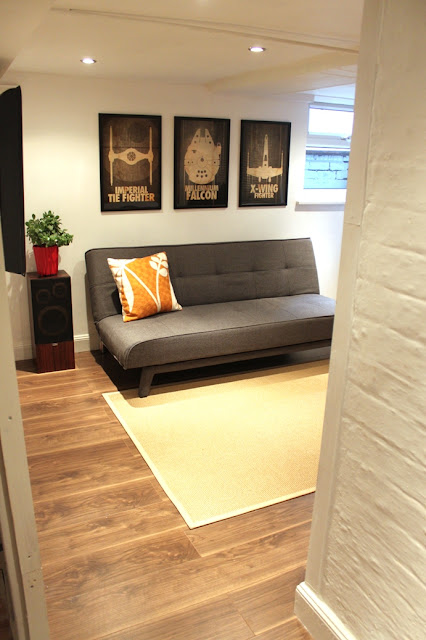 One of the most costly aspects of the work were the louvred doors (because they had to be custom made to size) but not only have they transformed the space, they provided practical hidden storage as well. 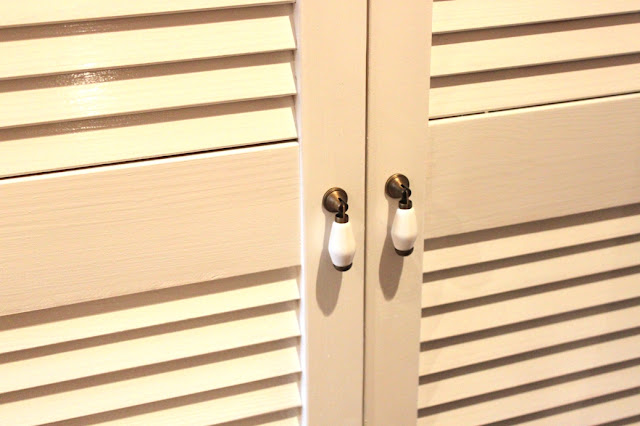 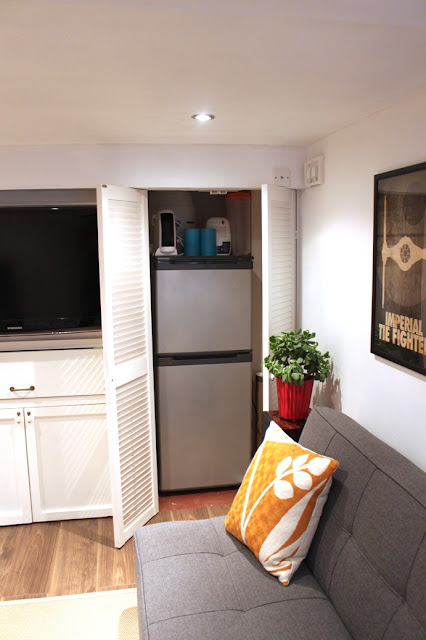 And the ugly boiler is hidden behind the other pair, also giving us an area to hide some unsightly bits and pieces. 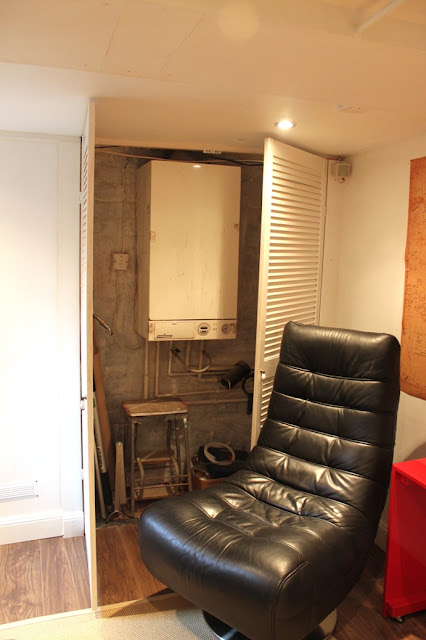 Remember all the gaming equipment I was talking about?  Well, the area under the stairs was called in to house everything. 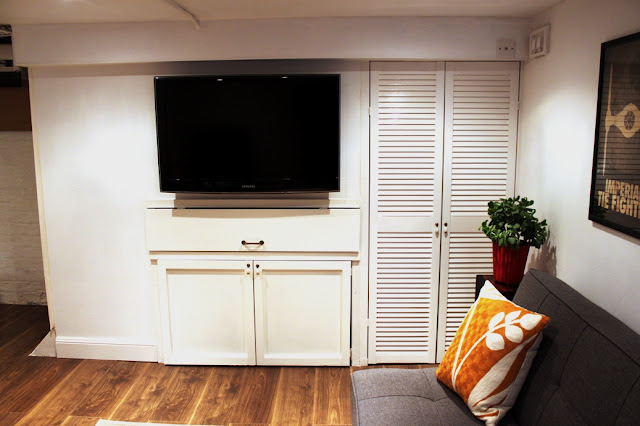 Wayne used MDF for the cupboard doors as well as the panel that lifts up.  Little hooks hold it into position… 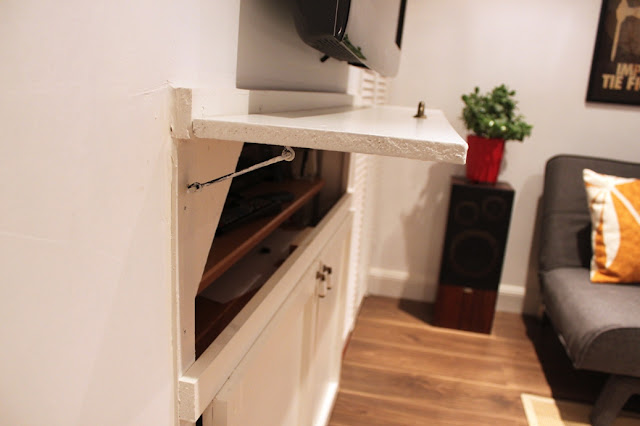 And the cupboard doors hide all the gaming crap so they only need to be revealed when he’s actually using it.  The shelving you see is just his old desk which he cut to size to fit the space. 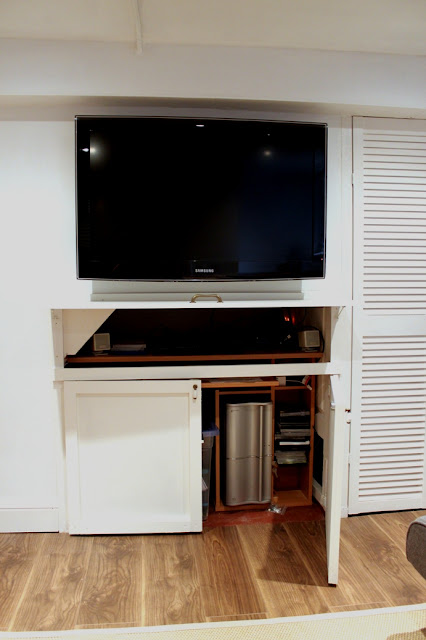 There’s still work to be done down here, however.  We completed the flooring around to the front of the stairs but we still need to box in the pipework and the electric and gas meters.  We thought a fresh coat of white paint would do the trick on that wall but now Wayne wants to drywall and plaster that area as well as continue the skirting board around it to finish it all off.  The kitty litter box hangs out there for now (it’s a covered one which is cleaned often and as the cats generally do ‘their business’ outdoors, there are no lingering smells, I promise!).  The stairs are also not yet completed – they need painting and a new runner so I’ll share that with you in time. 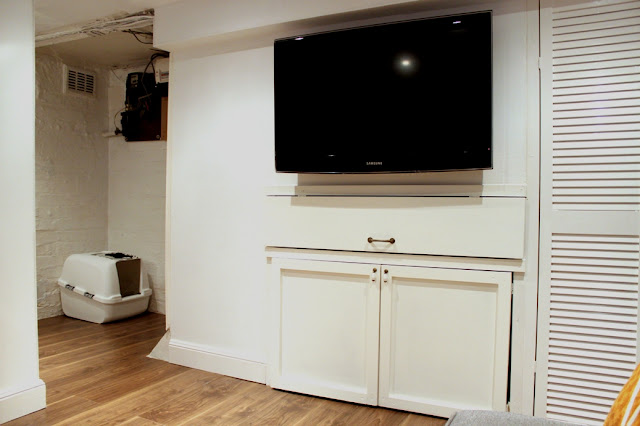 The room is fairly small – just 2.6m x 3.2m plus the storage area and the stairs – but at a going rate of around £800-£1000 per square meter to finish a basement, it would have cost us somewhere in the region of £10,000 to have a contractor come in to do the work.  Happily, even with the purchase of the sofa and the other bits and pieces, all in it’s cost us less than £2000.  And plus, it’s probably added about £8,000 to the value of the house.  Ok, it probably would have been done a lot quicker but that kind of saving and value just can’t be sniffed at when you DIY. 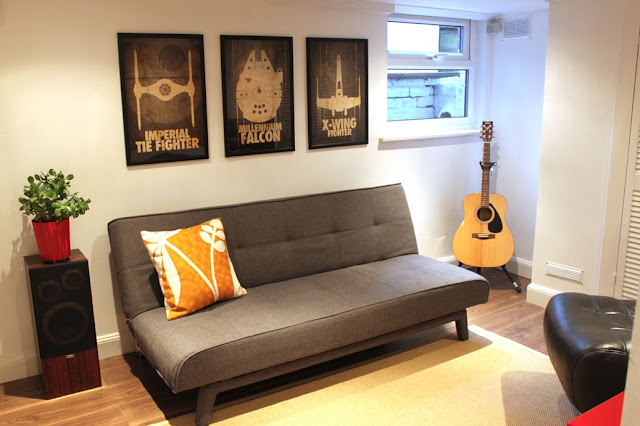 So what do you think of our ‘Man Cave’?  Was it worth the wait?  Considering tackling your own cellar remodel?  Would you trust your guy to decorate a space by himself?  I’d love to hear from you…