I know, I’ve been a terrible blogger – what with not posting for a whole week and all.  I was away all weekend for the Meet The Blogger London event and while it was absolutely fabulous hanging with lots of bloggie mates, I went back to work a little brain dead this week.  And as you know, I also blog for a living over here.  And things are a bit crazy over there because I’m having a little bit of a redesign and then I’m having a really BIG redesign which is all rather exciting.  So yeah, no breaks for Kimbers.  A bit of a rest was required, I do hope you understand.

While I sort through my 200 some pictures from the weekend and attempt to create a cohesive post out of it (promise it will not contain 200 pictures), I’d thought I’d share Emily Henderson’s bedroom which I came across today on Apartment Therapy because I almost weeped it was so pretty. 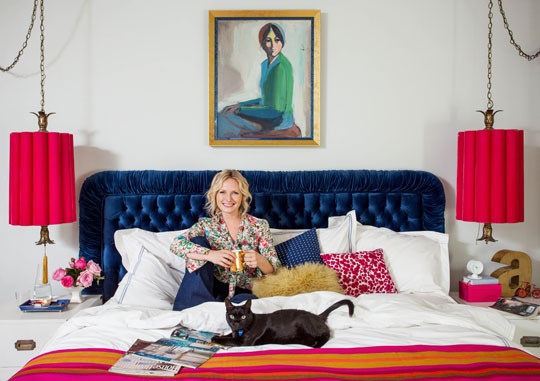 I think it’s the bedside lamps that are killing me the most.  Killing me softly with their awesomeness.

I’m EXACTLY like this when I look at them:

I was aware of Emily Henderson I suppose when she won the whole HGTV ‘Design Star’ thing but only via other blogs as they didn’t show it here in the UK.  But slowly, the more I see her work, the more I really like her style.  It’s quirky, eclectic, lots of vintage stuff thrown in there but mostly, I see it as accessible.  And that’s important to me.  Because I can look at someone like Kelly Wreastler’s style for an age and yet, none of it feels like something I could or would do in my own home – mostly because the pieces she chooses are so far out of my price range, even a lottery win probably wouldn’t cover it.  But with Emily, it’s different.  She’s like your best gal pal who just has freaking amazing luck at the local thrift shops, ya know?

(I totally want her to be my best gal pal.  I reckon her cat Bearcat would be best friends with Pablo as well.  IT COULD TOTALLY HAPPEN.)

Here’s more of that amazing bedroom. So what do you think of Emily’s style?  Love it or loathe it?