I know this sounds ridiculously cliched and I feel like a bit of a dick just saying this, but being contacted to have your home featured in a magazine is an amazing honour.  (See? What a total dick.) 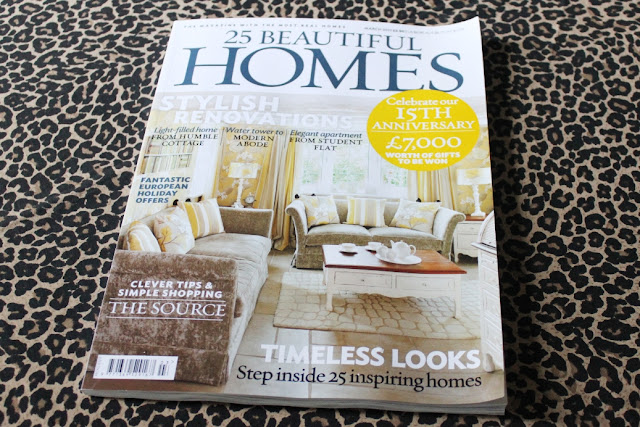 Right, at the risk of continuing to sound like a complete and utter wanker, I’ll attempt to explain.

It’s just that it’s rather strange if you are just a simple blogger like myself.  I’m not an Interior Designer.  I’ve never gone to school to study interiors and I’ve never worked for an Interior Design firm or really had any practical training whatsoever.  I just read a lot, take in a LOT of inspiration from all over and apply what I think I can in my home within a pretty tight budget that works for us both.  I think in the process of decorating this house, I’ve learned loads, made plenty of mistakes but somehow, continue to keep excited and inspired.  Regardless, it’s by no means a show home, it’s just a place we feel happy and comfortable in.

So when you get contacted by a national magazine, it’s a total crazy mindf**k.  It’s exciting, like seriously exciting.  And it’s also nerve wracking.  Just knowing that someone somewhere saw the pictures of my home and felt it was worthy enough to appear in their magazine is pretty crazy.  I started off exhilarated and flattered and on Cloud 9.  And then I checked out the magazine with different eyes, perusing over the homes they show.  Big huge houses where people have had architectural firms gut them, change layouts and materials and add extensions.  And then I experienced total crushing self doubt.  What if they come here and think the house doesn’t measure up?  What if they think my taste is weird?  What if they’ve made a huge mistake?  What if they notice with horror all the things we haven’t yet done?

And when the realisation hits that actual people are actually coming over to take actual pictures of your actual rooms, the panic REALLY hits and the race to get each room in the entire house up to some standard (where the measurement is so arbitrary, I can only rely on instinct and my shoddy budget) really begins.  I’ve been lucky in that both times I’ve had a photoshoot now (the last time was for Heart Home), the people whom I’ve welcomed into my home have been lovely.  For 25 Beautiful Homes, they sent a photographer from North Manchester, Haydn Rydings and his lovely assistant Laura, but no stylist.  He was ultra polite and very professional, didn’t really move anything around at all and there was no styling whatsoever except what I’d already done.

Happily, the morning of the shoot, the skies were starting to brighten and after a while, the sun actually came out!  In Manchester!! I know, I was as surprised as you.

After introductions and a tour, Haydn and Laura got to work.  They started in the bedroom because early in the day, that room gets the best light.  Regardless, because the room is black and the bedding is white, Haydn explained to me why taking pictures in Manual is far better than relying on Automatic (as I do so often – but I’m working on it! Thus the questions).  He said that the camera tries to balance the extremes – the black walls, the bright light coming from the windows and the bright white bedding.  Because the camera doesn’t know what you want to focus on, when it’s on Auto, it will try to balance everything out – your black walls will look sludgy, the white bedding blown out.  With Manual, you get so much more flexibility to decide what the camera – and ultimately what the viewer – gets to see and what gets the focus.  It makes sense, no? 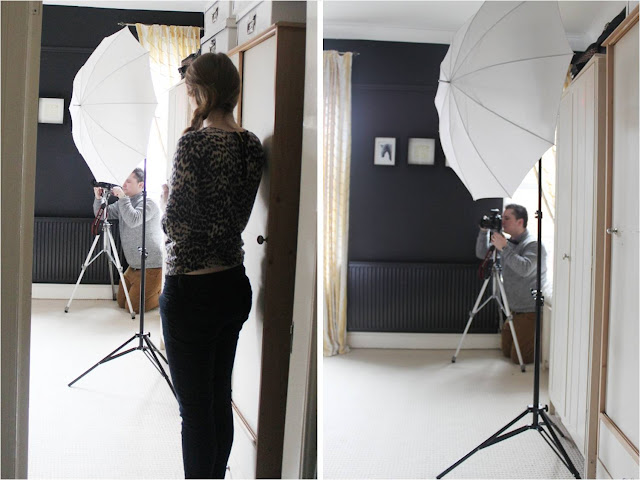 Because I was asking so many questions and because Haydn was so nice in answering them, I felt it best to excuse myself for a while and let them get on with the shoot!  So they shot the bedroom and dressing room (which is tiny so the less bodies the better) without me present and then they moved to the living room.  With this room, Haydn used a large reflective disk that kind of looked like those things you put in a car windscreen to keep the sun from boiling your car in the summer time.  It reflected light from the window to the alcove. 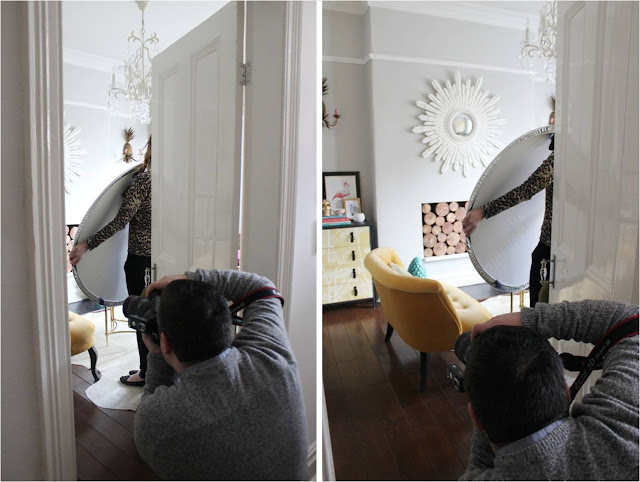 I found it interesting as well that he shot everything in RAW format in black and white with his Canon.  He told me the file format saves all the colour but viewing the image in black and white helped him to see exactly where the light hit in the image.  He showed me a couple of images he’d shot and they actually looked rather amazing in black and white.  It was easy to see the textures and the contrasts between the blacks and whites and exactly where the brightest parts of the pic were and so he could make adjustments more easily when viewing the images like this.  Fascinating, no?

Lesson over, Haydn then moved to the dining room… 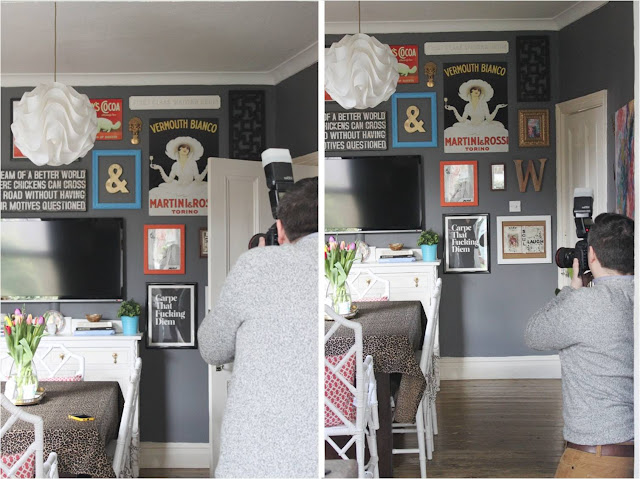 And finally the kitchen… 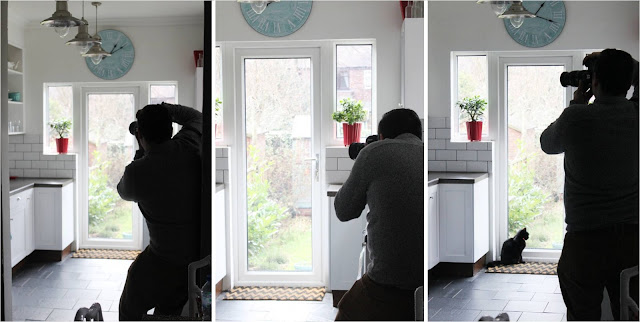 They were in the house from 9am until 2pm.  He told me that 25 Beautiful Homes required about 50 decent images of which they would choose about 25 for the final feature.  Because there is so much detail (and THINGS) in my home, he told me that he could have easily filled that requirement in just two rooms!  So making decisions as to what would make the best pics was important. 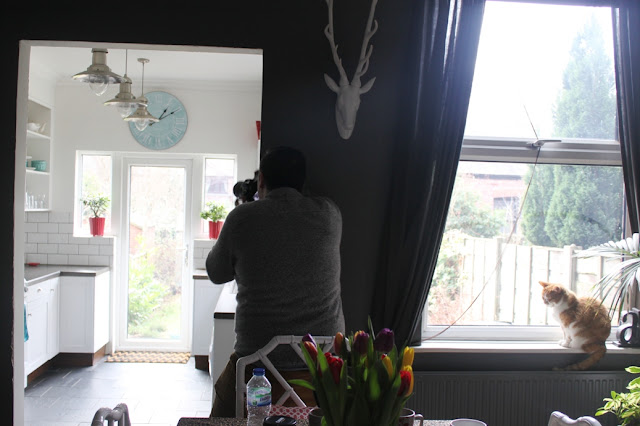 The most nerve wracking of all of them were the ‘owner shots’ where I had to pretend to look at a magazine or be on my laptop while he took pictures of me!  Dear god, how embarrassing.  I only hope that the pics come out okay but I pretty much never like pictures of myself.  In fact, I didn’t even ask to look at the pictures because I would have surely made him delete every single one of them.  That’s pretty normal, right?  I’m trying not to think about that to be honest.

I had my interview for the piece on Sunday over the phone.  It’s funny because the Red Magazine interview which I did the previous Friday, was really focused more on the interior design of the place and lasted more than an hour.  For 25 Beautiful Homes, the journalist focused more on the work we’d done in the home and the conversation lasted about 45 minutes.  So it’s nice that each article will focus on a different side of our journey so far.

In terms of when the 25 Beautiful Homes piece will be out – I’m not entirely sure yet.  I was told by the journalist when I had the interview part of it on Sunday that she was going to be letting me know.  I believe the Red Magazine article will be out in May but I’m waiting for confirmation on that.  So when I find out, I’ll let you know!  And of course, I’ll be scanning the articles and sharing them here with you!

The crazy thing is, at work, we had a reader question for Beautiful Kitchens Magazine and they asked me to answer the question (it was about recommending a range cooker from our line) and send in a head shot to be shown as an ‘expert’ on their panel.   The issue should be coming out in May for that too.

So over a 6 month time span, I will have appeared in some form or another in 4 different magazines – Heart Home, Red, 25 Beautiful Homes and Beautiful Kitchens.  My brain may just explode.