So all the fabulous responses to my post about what to do with the big blank wall (seriously, you guys rock my world) lead me this weekend to doing a little shifting and zhushing to the space to see what was possible on ZERO BUDGET.  I’m a tight wad, what can I say, and I didn’t want to start spending money not being entirely sure of the result I was looking for.

So I took the advice I doled out earlier this month – I shopped my own house.  And I came up with something that, while not perfect, and certainly by no means done, fills the space for now until I find the perfect pieces to go there.  That’s allowed, right?  It was kind of a fun challenge to be honest.

Quite a few of you suggested a console table rather than a larger sideboard with a big piece of art and the more I think about it, the more I like that idea.  I still rather dreamily consider decorating a big ol’ china cabinet / welsh dresser but I fear it’ll be just too much for the space.  It’s not out of the running, mind you, because if I find the perfect fabulous piece, then hell, I’m still game.  A couple of you suggested gold or brass as well and god, y’all know me so well.  Gold, hell yes.  Come to mama.  So, yeah, I’ve kind of run with that idea as well.

It started with this piece.  Do you remember this? 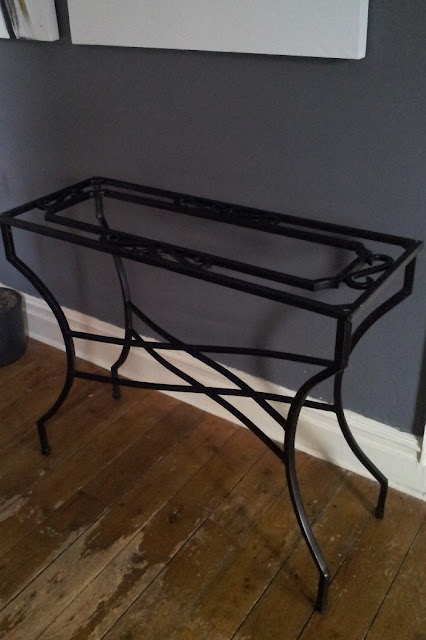 You might do, it started life in my dining room under the telly as a placeholder for the console and later, it stood in for the bar cart and I even sewed a console skirt for it.  It has a glass top which isn’t pictured but you get the idea.  It also used to live in my bedroom before I got the chest of drawers to replace it.  I’ve had it for at least 10 or so years and has come with me to every home I’ve lived in this country (which, at last count, was 7 different places) because ya know, consoles are pretty damn versatile.

But this was black wrought iron and while I used to be into wrought iron in a big way in the mid 90’s – early 2000’s (showing my age there), it didn’t really toot my horn anymore.  It was stuck in my guest bedroom (which has somehow in the last year or so turned into The Room Where Shit I Don’t Use Anymore Goes To Die).  I pulled it out, wrestled it down the stairs (that thing is HEAVY) and set it into place.  The depth was perfect, the width a bit small but workable.  So on Saturday, I sprayed her with my Montana Gold Gold Chrome, my favourite of all favourites gold spray paint.  Shiny Shiny, baby.  I still don’t like the ‘S’ bits all over but figured they’d be mostly covered once it was styled up.

Then, realising I had a big ol’ canvas in my living room and a second blank one of identical size stuck behind some other crap in the Guest Bedroom, I had an idea.  Why not use both, side by side?  See how Big Art looks in the space?

Here’s the ugly before the pretty.  I know what you’re thinking.  How the hell is she gonna save this one??

The rest sort of just went on from there.  I ended up lowering the canvases because I didn’t like the big ‘line’ it created with the top of the door frames and it was far too high above the console table (cue filling holes and touching up the paint).  I also decided to offset the table because I wasn’t fooling anyone that the piece was actually the right width for the space. 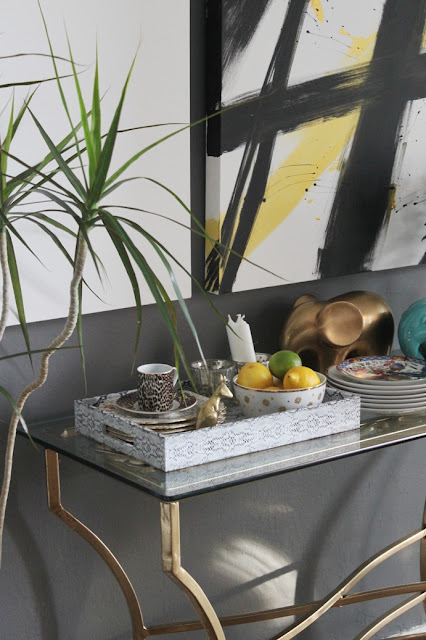 Just a reminder, please, this is TOTALLY A WORK IN PROGRESS.  A trial run, if you will. 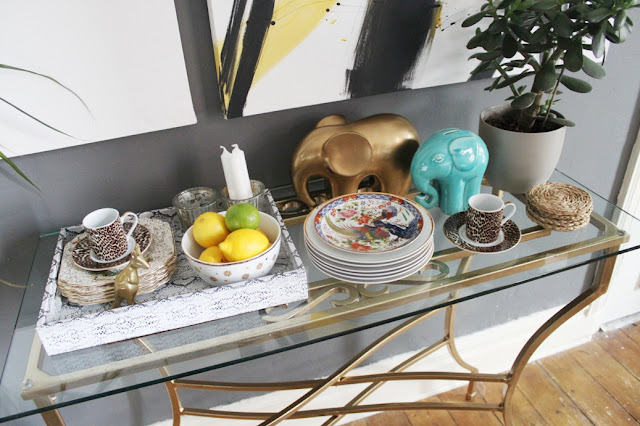 I decided to make it a little dining room-y (dining roomie?) by taking the plates that sat at the bottom of my bar cart and stacking them on the table along with my little leopard print espresso cups that were in the kitchen shelving.  A couple of elephants, a bowl of fruit, a plant, a tray, a brass kangaroo.  Stuff basically.  Covering up those ‘S’s.

Here’s what the whole space looks like.  Yep, the second canvas is blank!  Have to get my art on, ya see. 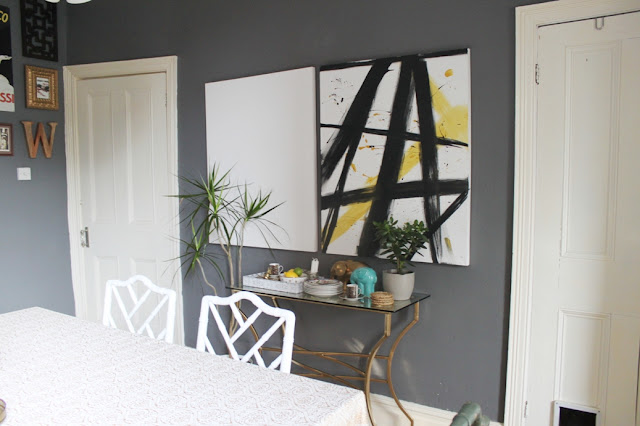 My dragon plant takes up some of the space on the left.  It should probably be on a plant stand to raise it higher or maybe I should use a bushier plant, but ya know, zero money trial run here. 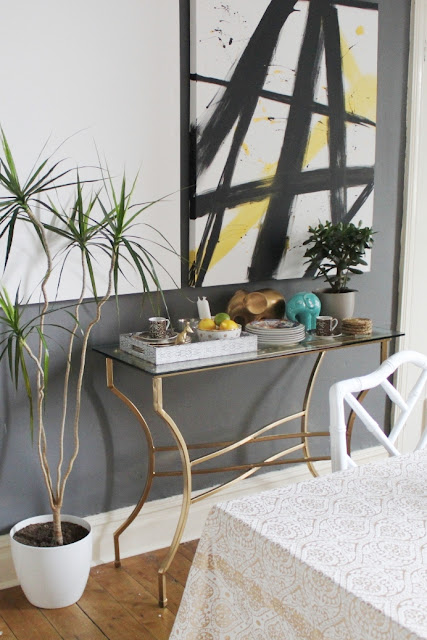 You can see here, there’s still plenty of space around the table. 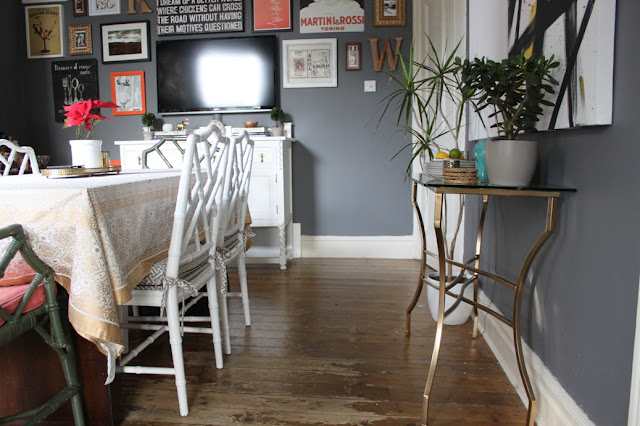 Excuse the frightful green chairs at each end of the table.  They need their makeover.  And can you see how horrendous my floors are in here?  They are dying to be refinished.  I told you it was a room in progress.

Here are the green chairs in situ in all their scuffed up mauve-seated glory.  Good bones though, I promise.  Their time will come. 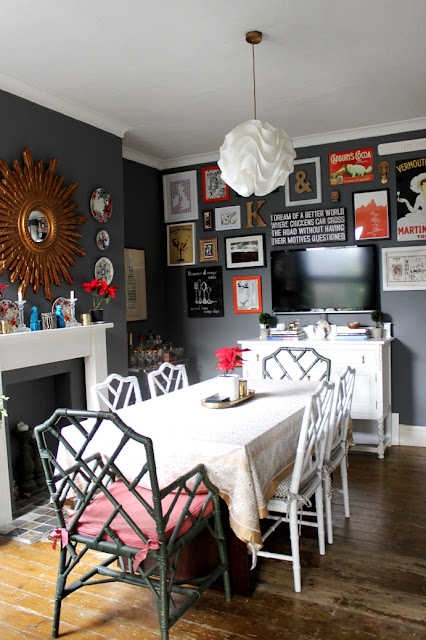 I did a little bit of switcheroo on the console and the mantle as well. 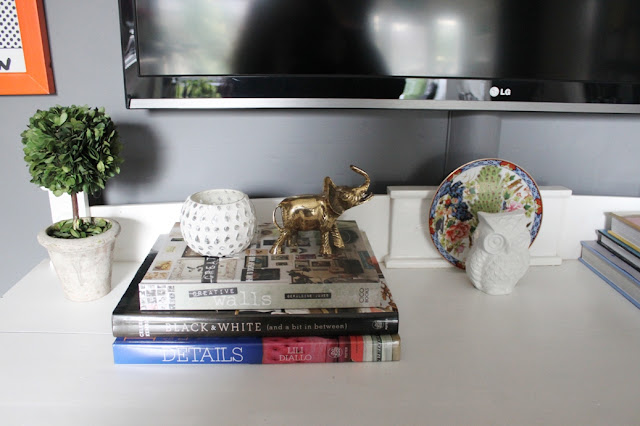 Simple is good.  A couple piles of books, wee animals (I honestly have a zoo here people) and the little topiaries I got over Christmas. 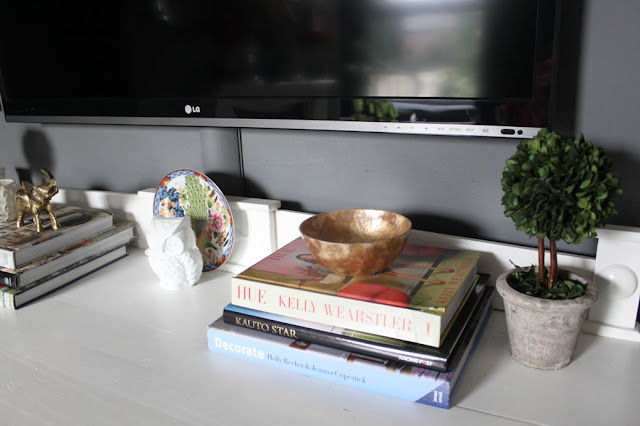 And the mantle which contains my remaining poinsettias which REFUSE TO DIE.  I have lamented on the fact that these things are thriving despite me not wanting them anymore.  Christmas is over, move on.  Alas, I feel guilty getting rid of perfectly acceptable plants.  Sigh.  So at the moment, they’re on my mantle in the little plastic pots they came in (!) – at least it’s a bit of colour there.

I did, however, pick up the little ceramic zebra pot from H&M (£7.99!! Bargain!) and 2 more Anthro side plates from the Sissinghurst range which I’m in love with. 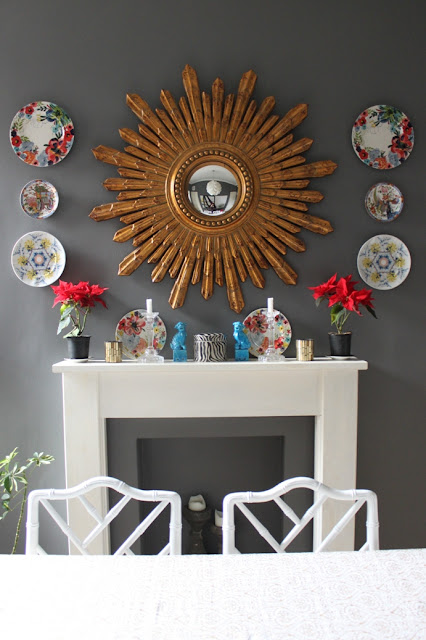 The glass candlesticks were also purchased over Christmas.  The little gold votive holders were an eBay purchase – under a fiver for 3 of them. 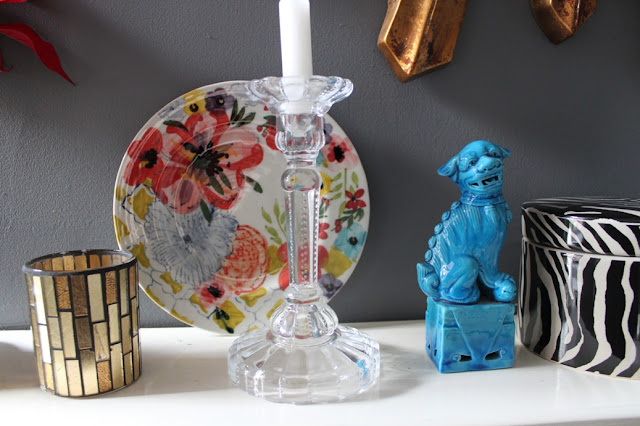 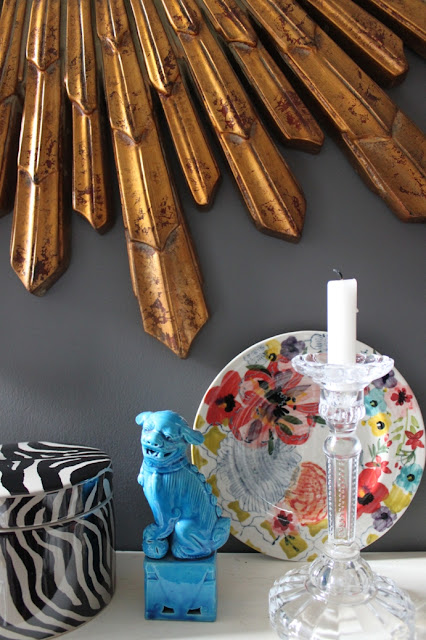 So that’s my dining room shuffle.  Expect more changes to come but I suppose it’s not too bad a start considering it’s price tag. 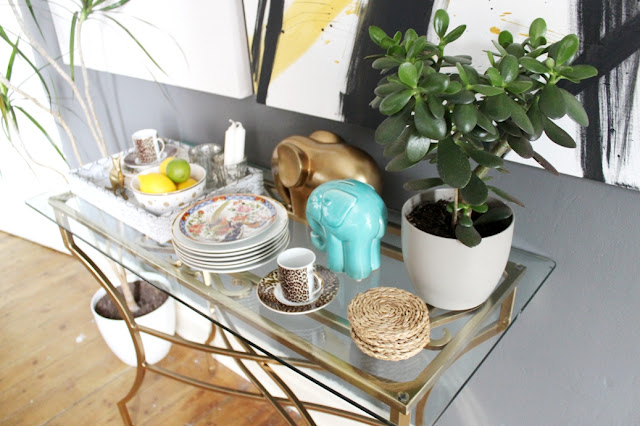 What do you reckon?  Is it a start?  Or should I scrap the whole thing and start afresh?