I did a post on faux bamboo chippendale chairs way back when but I thought it was time to have another round.  “Why?”, you may be asking…  Well, because since I got my own chinoiserie lovelies, I have been on the lookout for more… This lust doesn’t just abate automatically, my friend.  When something is a trend, you may find yourself tiring of it quickly but this one for me just never seems to end.  I don’t care how ubiquitous something is in blogland, when you really love something, you really love it.  End of.

And I think because they are so incredibly hard to find in the UK, the want – nay, the NEED – for it becomes so much more passionate.   I can’t just rock up to my local antiques fair and find anything like this, it’s just not going to happen.  No, these babies need to be dug up from the bowels of eBay, search after search through literally thousands of listings to see if such a thing exists out there without the seller’s realisation of how precious they really are.

It’s taken me a full year to find them.  A year.  And when I did, I hoped and prayed that no one else might be searching too and outbid me.  I had a set price in my mind of what I knew I could afford, hoping praying they wouldn’t go above this price as had happened in the past, just once or twice before.

I showed Wayne the listing and kept him updated as the price rose slowly over the course of a few days.  On the night the listing was to end, my phone was next to me all evening and I bid until the price went above my highest bid.  Disappointed, I vowed revenge accepted the chairs were not to be mine.

As a side note, I am quite good with not getting too caught up in the whole ‘auction’ mentality on eBay – it’s so easy to pay above the odds for things when the excitement of outbidding someone else comes into play.  I always have a set price in my mind, even if in this case it was far lower than what I knew the chairs were worth.

As the price continued to rise above my clearly inadequate threshold, I still kept my eye on the listing until the bitter end.  Call me a masochist but it’s hard to let go when love is so true.  When the auction finished, they went for far more than what my own set of 4 chairs went for (which admittedly, was a ridiculous steal) but this, my friends, this was not a set of 4.  It was a set of 6.  Do I need 6 chairs?  No, I do not.  But what this set had along with 4 armless chairs was 2 chargers – the babies that I had been seeking for so long to complete my set.

When the auction was finished,  I turned to Wayne and told him what the auction ended on which was around £100 more than what my bank balance would have allowed.  He then turned to me, smiled and said, “Yeah I know.  I was the winning bidder.”

“YOU were bidding on them?”

“Yeah, only after you stopped.  I know how much you wanted them and it was still such a bargain so I started bidding where you left off.”

I have never loved that man more than in that exact moment.

And as I attacked him with celebratory cuddles, he squeaked out, “We are splitting the cost, ya know!”

So finally, after a full year, I’ve got my two chargers and a complete set of 6 faux bamboo dining chairs.  They are in good condition but they’re ugly, like seriously ugly.  Strangely, they are dark green, the same as what my current dining chairs were before we refurbished them with glossy white paint and new cushions.  The cushions currently are MAUVE.  Oh dear god.  Dark green and mauve.  Hello, 1990s.

In the next few weeks, when Wayne is able, he’ll take them to his body shop and spray them a glossy white to match the others.  I’ll also need to figure out what fabric I’m going to get for the seat cushions which need replacing completely.  I’m thinking something dark and geometric (so as to hide stains, the white/grey ones are lovely but I’m in constant fear of spillage).  Or if I get a really wild hair, an animal print.  Or maybe something totally different.  Whatever I choose, it has to work with the Chiang Mai Dragon fabric (another obsession that refuses to abate) that will be going on the window AND the grey and white geometric fabric on the other seats.  So yeah, decisions to be made (any suggestions welcome, of course!). 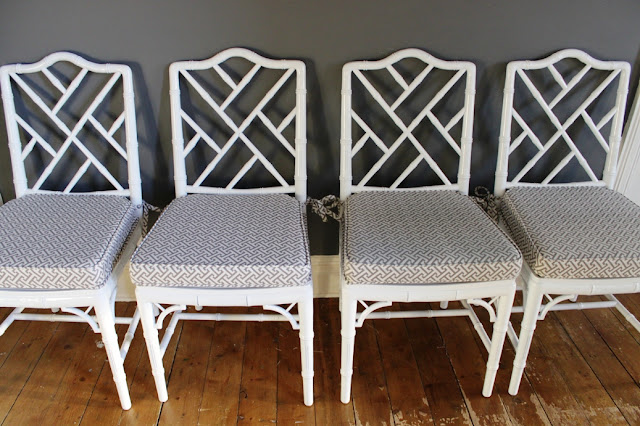 So, have you done any bargain hunting lately?  Is there something you’ve been longing for FOREVER AND EVER AND EVER?  Maybe your other half has surprised you?  Or perhaps there’s a trend that you’re just never going to let go of?  Sharing is caring folks.  The comment box awaits.

P.S.  What about the other 4 surplus-to-requirement chairs?  Well, I’m going to be selling them.  I have given one person the rights of first refusal and I still have to pull some costs together because I want to offer the option of having them professionally spray painted in any colour, but if that doesn’t pan out and you’re interested (and live in the UK), leave me a comment or drop me an email at swoonworthyblog {at} gmail {dot} com and I’ll put you down for 2nd bids!  First come, first served :)