So, as discussed in my last post, I’ve been playing around with the gallery wall in my dining room.  This gallery wall has been in progress for more than a year now and it’s still not completed.  Well, considering how long and arduous a process it is to pull one together, I guess I’m not that surprised. 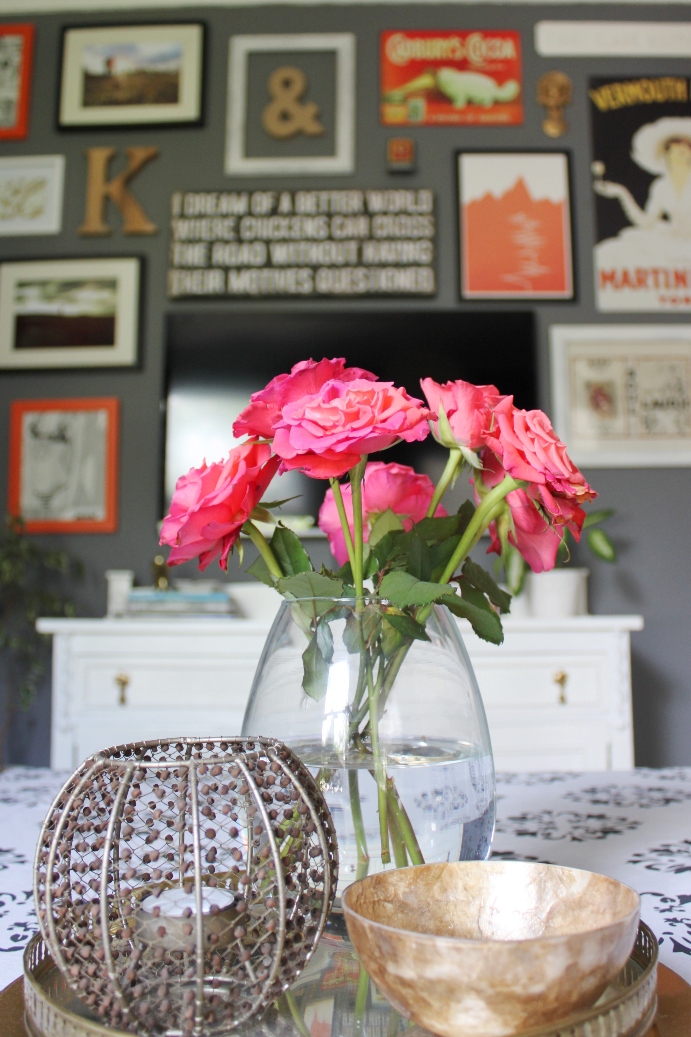 I think, like rooms, gallery walls look better when they are collected over time.  Why can’t any old crap be thrown up on a wall and be called done?  If only it were that easy but I’ll get to that in a minute.

As a little background, we just got a new television for the dining room.  If you are new here and wondering why the hell I have a television in my dining room, well, to make a long story short, W wanted it and I had to find a way to work around it.  Now that we have it, I can’t imagine not having it there.  Smack in the centre of the house, the room has become the hub of our house – we spend most of our time in there, especially in the early evenings, as it’s open to the kitchen so we can have it on while making dinner, listening to music (hello BBC 6 Music and XFM), whilst cleaning, faffing on our laptops at the dining table or playing SingStar on a Saturday night (within easy reach of the bar cart of course for dutch courage).

So back to the new television.  It’s much thinner and so sits farther back on the wall which is great because that means it blends in so much better with the rest of the gallery wall as it’s got the same depth of other items. 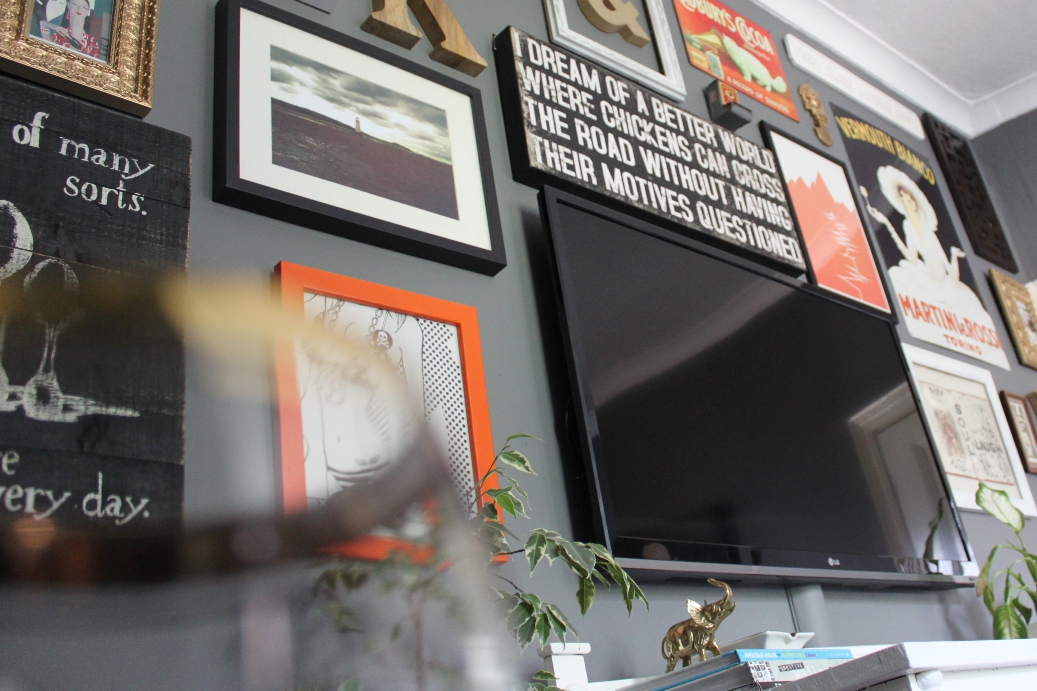 We’ve also decided to sit it a bit lower on the wall, better to be seen whilst sat at the table. 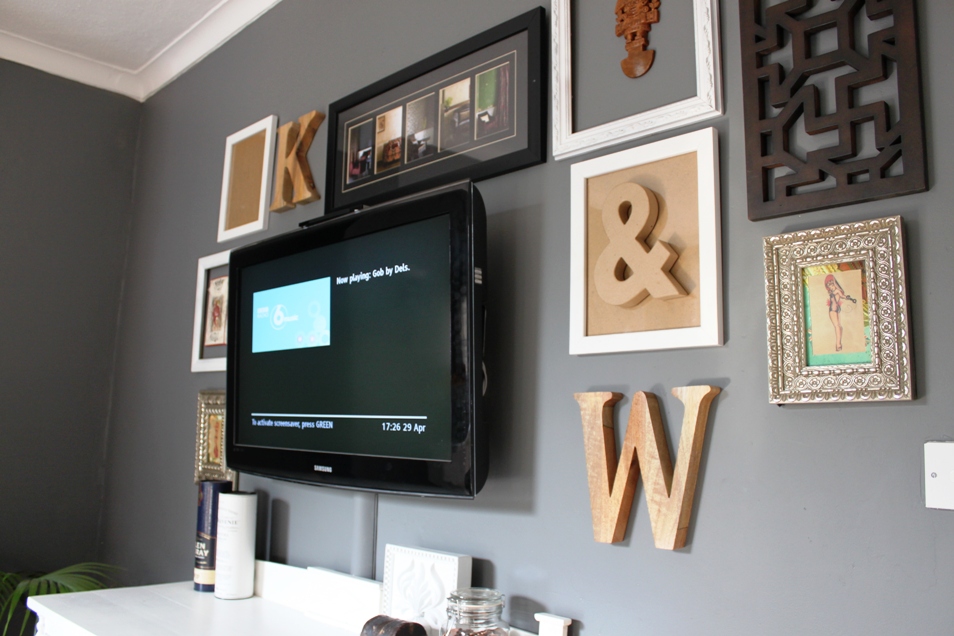 And here’s the protrusion of the new one.  Much better, no? 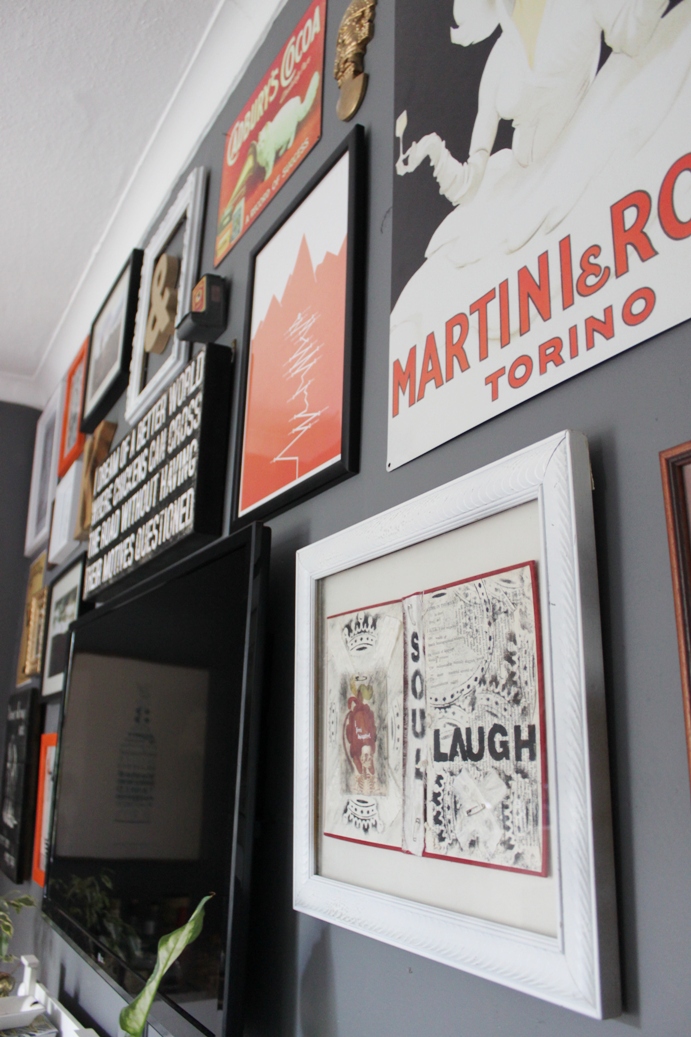 Well, once it was up, it was obvious that a bit of a rethink was in order as to the items on the wall.  The gallery had begun with less than 10 items and has grown little by little over the past year where I have been adding and changing things ad hoc although not really changing the configuration of the original items too much.  Changing the placement of the telly gave me an opportunity to rethink the whole wall.

I started with a new piece that that had originally been placed at the far left corner of the wall as that was the only place it would fit in the existing configuration so I decided it would work better due to it’s size and shape, closer to the centre. 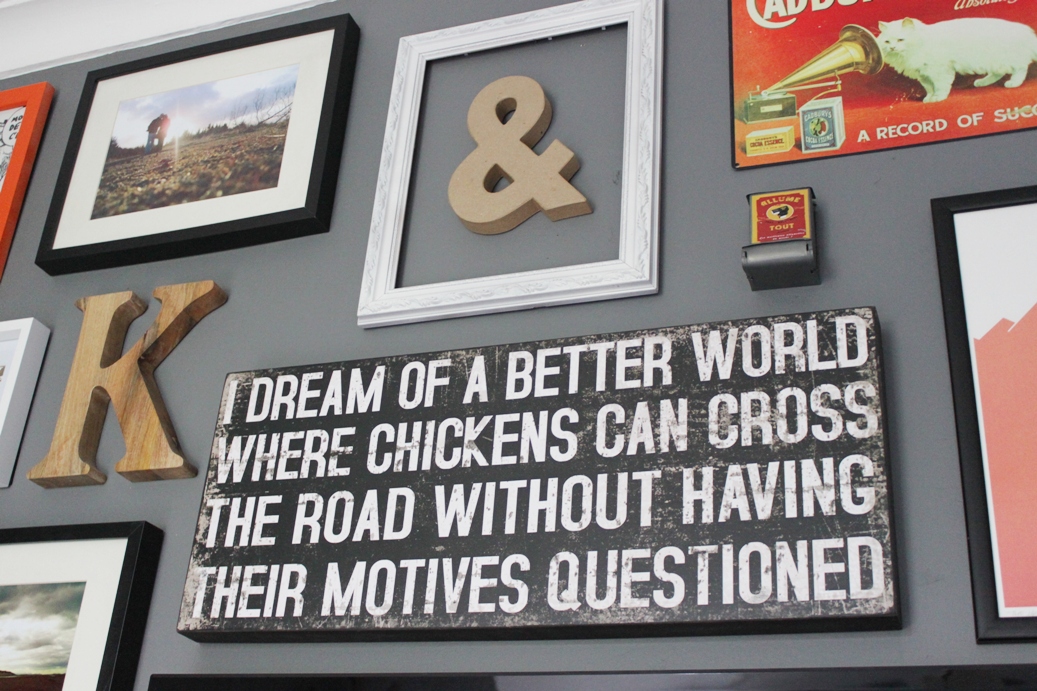 I think every room needs a bit of a sense of humour, don’t you? :)

I added the photos that originally were in the living room, one of which was taken on an impromptu trip to the North Wales coast and another of W and I wrapped up against the cold during a city break we took to Reykjavik, Iceland. 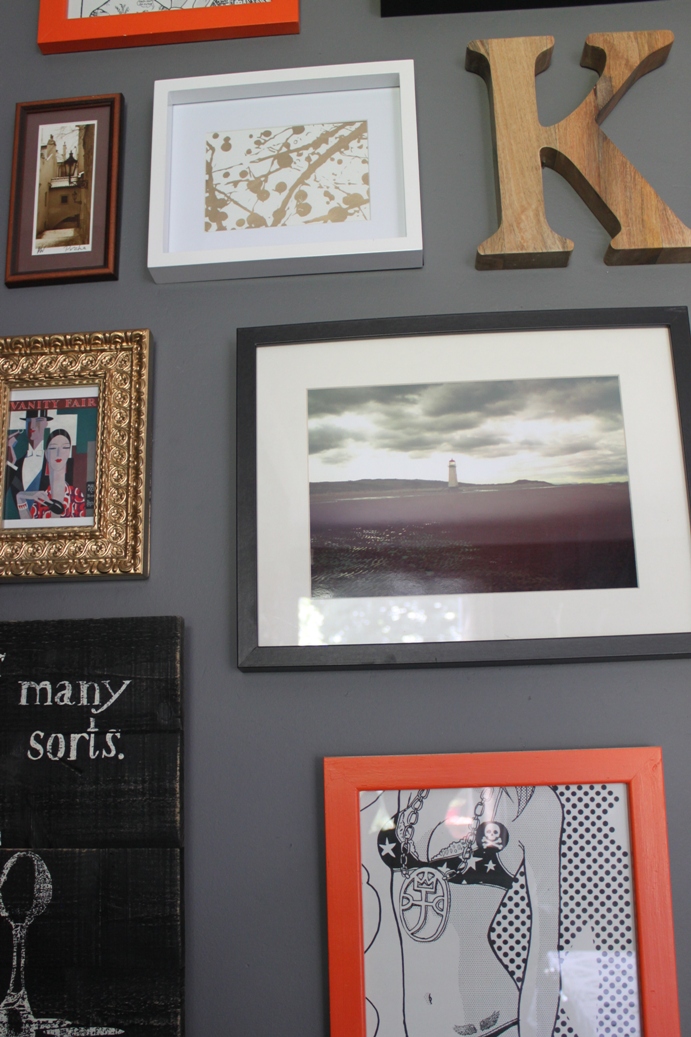 I also added a  new print showing the UK silhouetted against lots of colourful Union Flags. 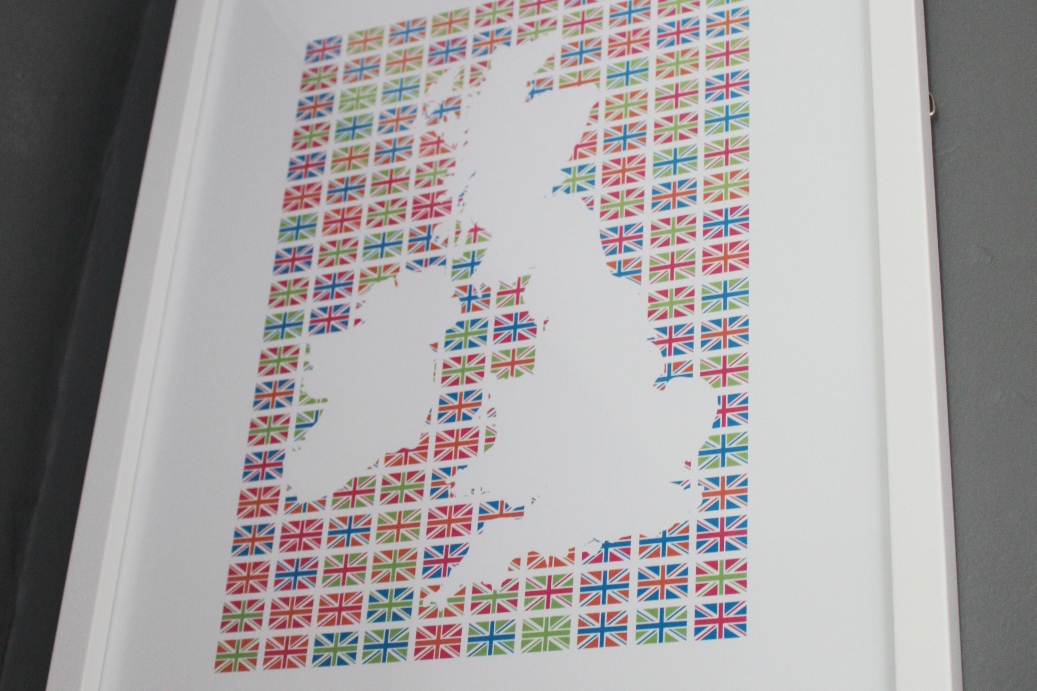 During the process, I realised that a couple of pieces just didn’t ‘speak’ to me anymore and so, they went!   Edit, edit, edit!

It was a great exercise rethinking and reworking the whole wall and I decided now might be a good opportunity to share 10 tips for creating your own gallery wall.  These aren’t hard and fast rules by any means but if you are considering starting a gallery wall, there’s a few things to bare in mind. 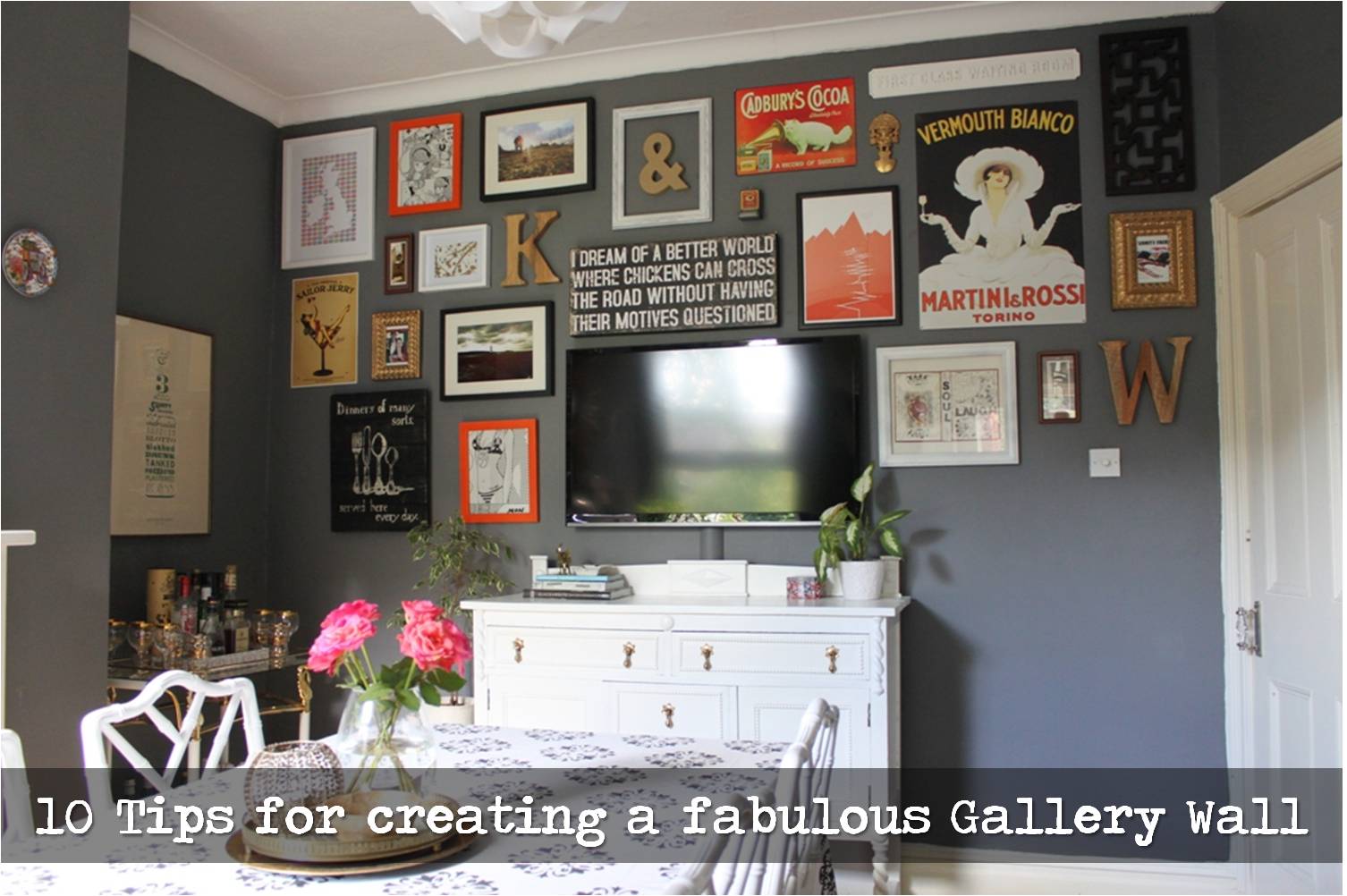 1.  Start small and work up:  You can begin with a small collection.  How small depends upon the size of your wall and the size of your pieces.  I started with around 10 pieces.  A year later, there are 24 pieces (not including the television) and it’s still not complete as my plan is to cover the ENTIRE wall.  I figure I’ll need around 10 more pieces for it to be ‘done’.  This is a long term project, so don’t expect it’s going to be done overnight – but, hey, that’s part of the fun.

2.  If you’re not sure where to start, stick to a loose theme:  It’s easier to pull together a collection when you’ve got a direction to take it.  So whether that’s by subject matter, by colour palette, or even by similar frames or coloured mats, make sure that at least 80% of the items you choose stick to this theme.  If 20% fall outside that theme, it’ll still work as it breaks things up and keeps it all interesting.

3.  Make sure it reflects you and your personality:  You are the one living with this every single day, no one else.  Make sure you actually like what you put on the wall and that it reflects your personality and those living in your home with you.  Don’t be so self-conscious about your collection that you are afraid of whether something is trendy or cool – if you love it, it probably works. 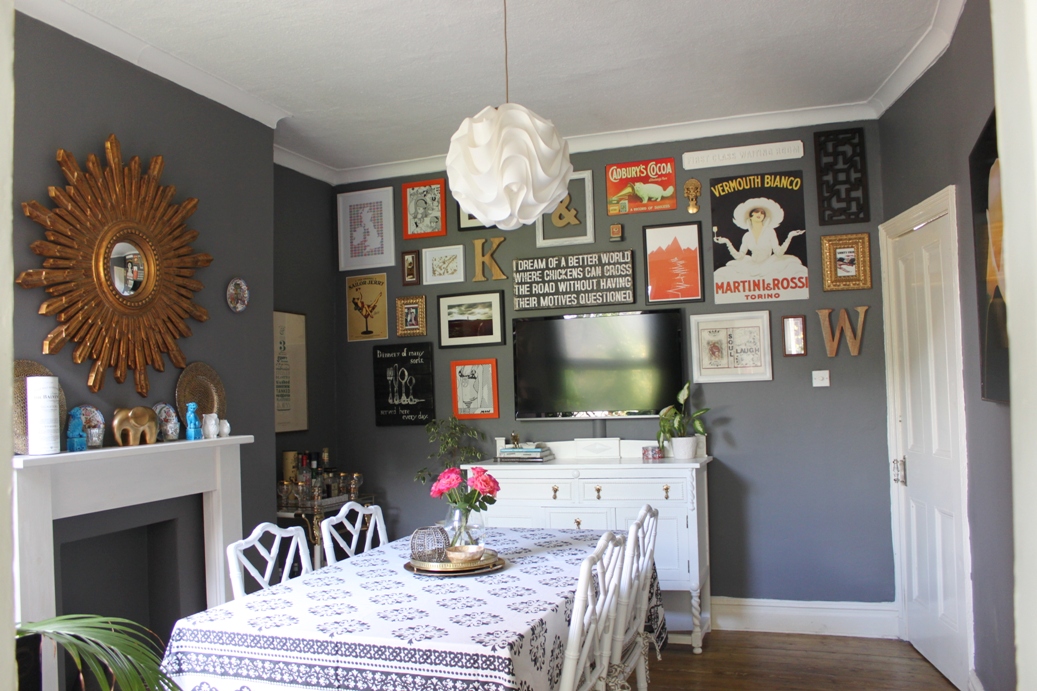 4.  Try Before You Buy:  This is an oldie but goodie.  Simply trace your frames onto paper and place on the wall with blue tack or similar to decide on your rough format before you start making holes in the wall.   You can also try creating the layout on a floor first before you recreate it on your wall.  Bare in mind, however, that this is by no means foolproof.  Sometimes, biting the bullet and just getting some stuff up there works best as you can better assess a balance of colour, scale and style when it’s actually vertical.

5.  Decide whether you want something casual or formal:  Your spacing will play a part in whether or not your final wall looks chilled and casual or chic and classy.  The more random the spacing, the more casual the look.  If you have everything perfectly spaced, it’ll look more formal.  I find using the 80/20 rule works here too.  If you have a couple of pieces that are more widely or closely spaced, you will end up with something that looks cohesive without being too stuffy. 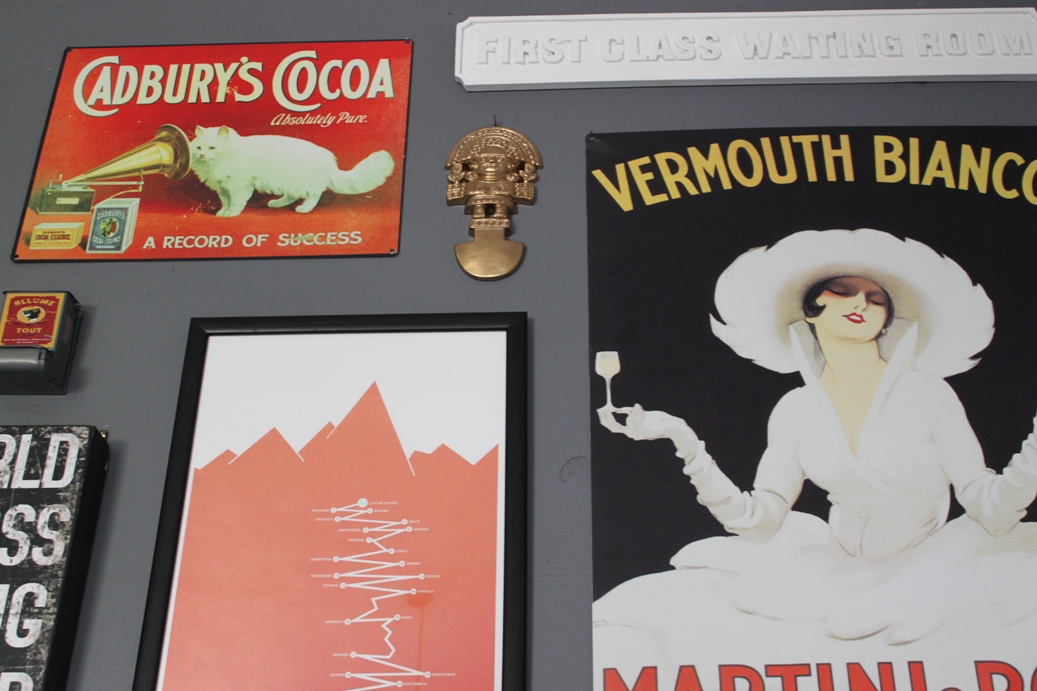 6.  Don’t be afraid to hang stuff up that wouldn’t normally go on a wall:  You don’t just have to hang prints and canvases.  Mixing in bits and pieces of random paraphernalia keeps things interesting, especially if they have special meaning to you.  So tickets to a gig, the keys of your first home, your kid’s art project, an old interesting branch fallen in your back garden – it’s all game.

7.  Don’t take the whole thing too seriously I:  There’s nothing wrong with adding a bit of humour to your wall.  If it makes you smile, it’ll probably make other people smile as well.

8.  Don’t take the whole thing too seriously II:  Don’t be afraid to try and fail and try again.  You are going to end up putting more holes in your wall than you intended.  But ya know what?  Just do it.  There’s nothing a touch of filler and a bit of paint can’t put right.  When I was rearranging, I got the paint out and followed myself around with a paint brush to touch up (it helps if you’ve got flat paint on the wall because touch ups blend in).  It’s all part of the process.  I tend to hang stuff with picture hooks (like these which will take the weight of most standard framed prints) rather than drilling large holes in the wall or using nails because a tiny pin hole ‘oops’ is less obvious than a huge hole ‘oops’.  Obviously, use fixings that are appropriate to what you are hanging but that’s what the filler and paint is for. 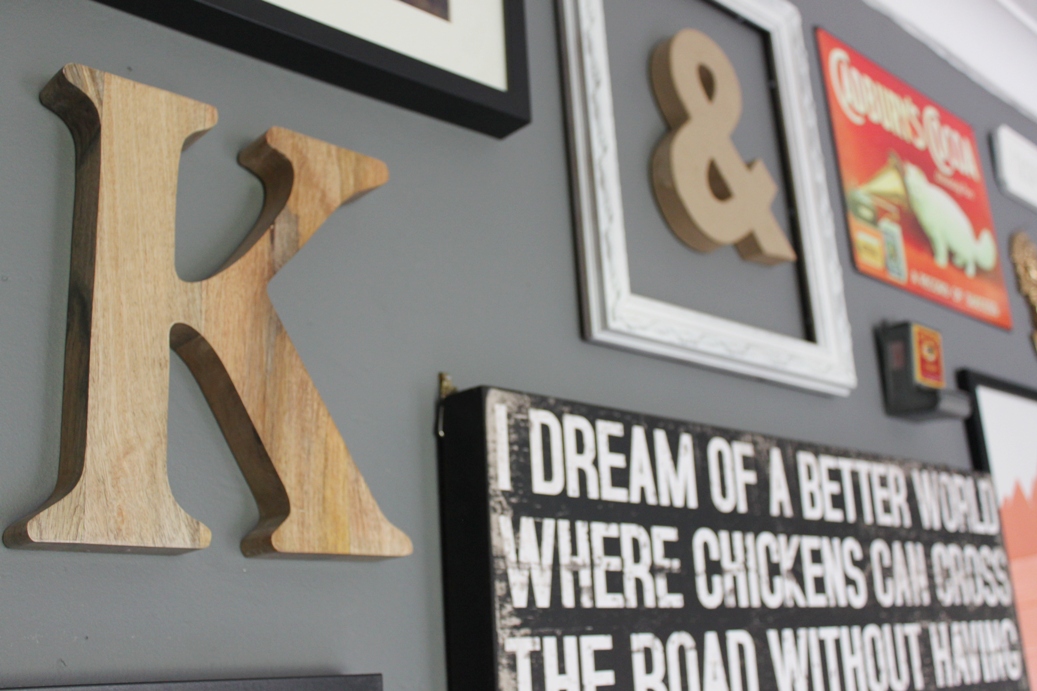 9.  Mix it up: No matter whether you are going for something formal or casual, the most interesting schemes mix landscape and portrait shapes.  Getting a good balance of small, medium and large items keeps the eye moving along as well.

10.  Allow for the wall to grow and change with you.  Don’t be afraid to edit or remove things that no longer work for you or for your scheme.  One or two new pieces can be enough to refresh the whole wall or pick up an additional colour in your scheme.  (I’d like to add a few pops of turquoise going forward.) 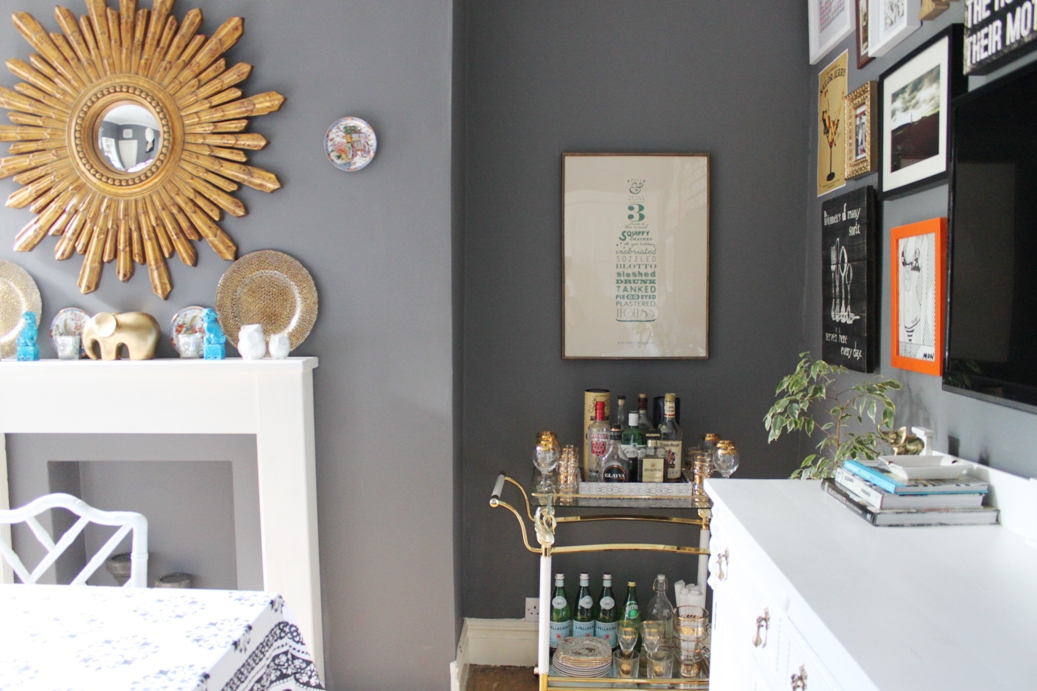 So that’s what I’ve learned whilst attempting to create my own gallery wall.  It’s not done yet, as I said, but I’m enjoying the process and I’ll probably be a bit sad when it’s all done!  (On second thought, I’ll probably just start a new one somewhere else!) Have you created your own gallery wall?  Want to share some tips of your own?  Want to link to your own?  The comment box awaits for your contribution!

PS If I get enough links to others’ gallery walls, I’ll do another post showcasing ‘Readers’ Walls’ (kinda like Readers’ Wives but less saucy) so get commenting or you can email me on swoonworthyblog{at}gmail{dot}com. :)