Happy Monday!  In the UK, it’s a Bank Holiday, so we’ve all got the day off.  Which is pretty sweet as I booked Friday off as well so a 4 day weekend has been mine!  It’s been brilliant and I’ve been getting through all sorts of odds and sods and little projects here and there which I’ll be sharing in the coming days and weeks!  If you are in the UK, hope you are milking it for all it’s worth and having a good one.

Now, I’ve been looking for a vintage coffee table for the past few months.  I liked our old coffee table well enough (one of the few things W had in his home when we moved in together that I approved of as so much of it was cheapie ‘bloke’ wares bless) but I really wanted something that took up less visual space in the relatively small space it occupied.  I also wanted something more ermm gold.  And vintage-y. (Yes, that’s totally a word.) 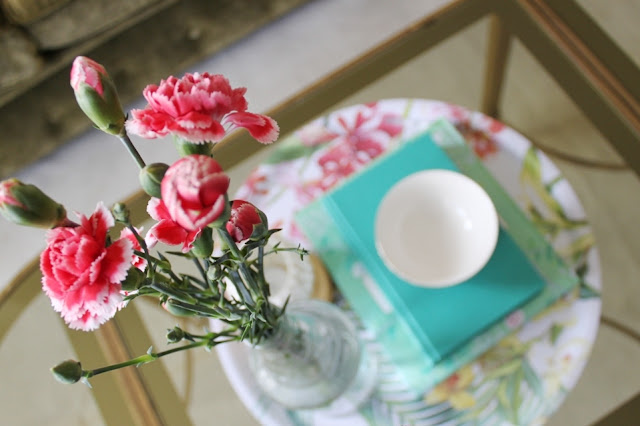 After probably looking through THOUSANDS of glass coffee tables on eBay (seriously wish I was exaggerating), I finally found exactly what I was looking for – delicate, vintage, gold and curvy.  Hurrah!  And at £30, it was definitely worth the 40 minute drive in a torrential downpour on a Sunday morning to pick it up.  The only problem?  When I put it in the room, I realised how desperately it needed a rug to anchor it in the space.  A delicate glass table in a sea of very dark stained wood just wasn’t working.  Hmmm.

Now, as I told you last week, a white cowhide rug is something I’ve been dreaming about for my living room for pretty much as long as we’ve lived in this house – so that’s nearly 2 years. I just haven’t wanted to splurge £400 on a good quality one or take a chance on a cheap one for around £200.

So finding the rug only a few days later was pretty much of a sign.  IT WAS TOTALLY A SIGN, okay?

Once again, it was eBay to the rescue.  Oh sweet eBay, our relationship has been long and satisfying for so long.  An interior designer had specified a couple of them for one of her designs but a cream rug on cream floors meant the rugs got lost and an eBay listing was born.  Brand new and never used and listed at half the price of the original £400 price tag from French Bedroom Company?  Oh yes, yes indeed.  At just over £200 with shipping, it was a deal I simply couldn’t pass up.

By way of a reminder, here’s what the living room looked like prior to the new rug and coffee table: 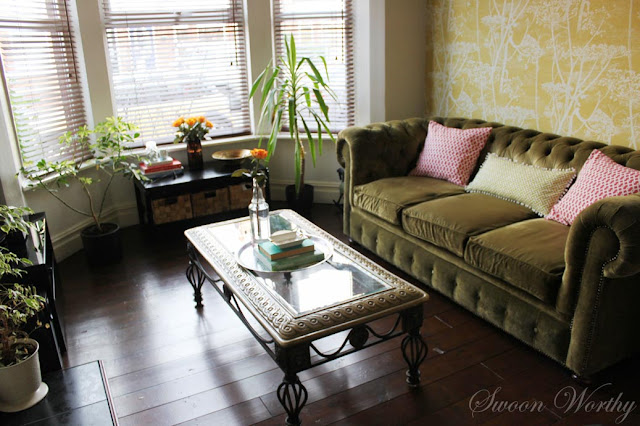 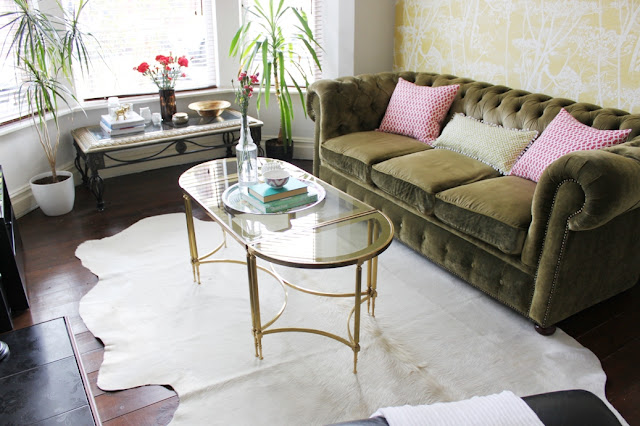 The eagle eyed among you may have noticed that I’ve removed the small table with the baskets and moved the old coffee table to it’s place in the bay window.  I’m not entirely sure it’ll stay there – eventually I do want more seating in this room but as W wasn’t entirely thrilled his beloved piece was being replaced, I thought it was a sensible compromise.  I also changed out one of the plants in the bay window for a taller one to balance the other on the opposite side. 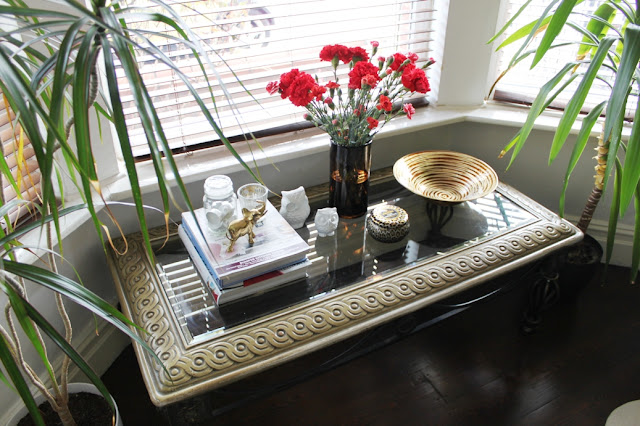 As an aside… I honestly believe carnations are the most under-rated flower out there.   Damn their petrol shop reputation!  I like to think of them as the poor man’s Peony!  I love them, all fluffy and gorgeous loveliness! 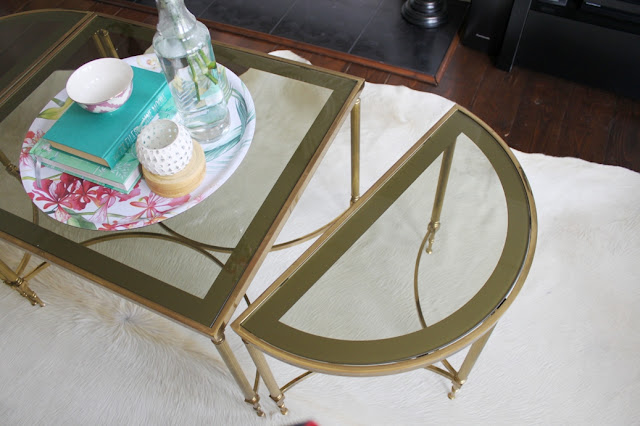 And create a little round table out of them…. Sweet, no? 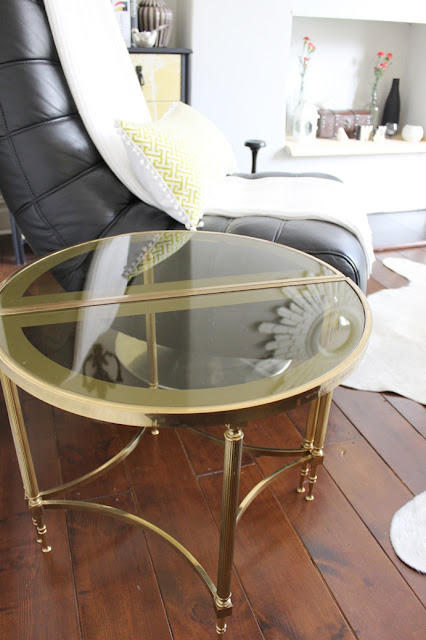 I do think the rug really makes the room more complete now.  Although I still totally need curtains! 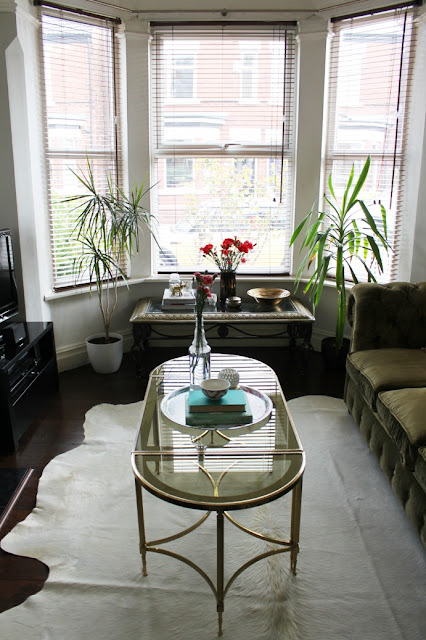 It’s getting there though.  The natural organic shape sets off all the hard edges of the room and the soft half circles of the coffee table mimics that curviness… 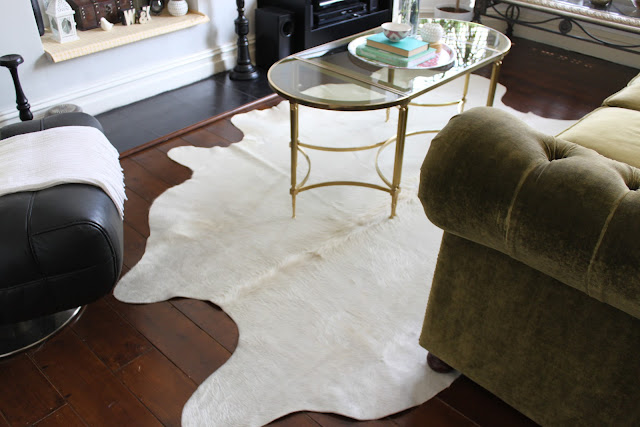 The touchy feely texture of the cowhide just makes me wanna roll around on it. 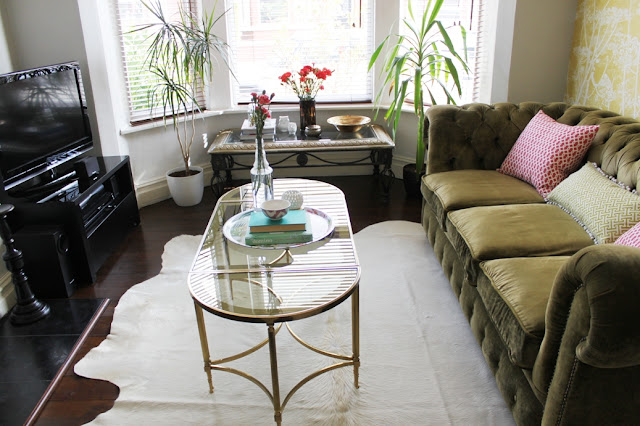 No, I did not just say that.  You totally read it wrong you dirty pervert.

Annnnnywayyyyy…. do you like the new combo?  It may be worth noting that W actually HATES the new coffee table.  He doesn’t like the ‘spindly legs’ and feels that it’s too delicate (he’s actually used the word “horrible” on a number of occasions – hmmm).  I reckon he’s just annoyed that I won’t let him rest his feet on it when we watch television anymore.  To rectify that, I promised I would get him a cute little stool of some sort so he can still have his comfort factor and I can still have  my pretty factor.  It’s all about compromises, eh? (Except for the fact that I totally won this one…*cough*)

In other living room news, I’ve made yet another small change that’s made a big impact in here which I’ll share with you very soon! Also? W has started work on his ‘Man Cave’ – the cellar.  So I may have some pretty horrific ‘befores’ for you there soon too.  Oooh and I’ve made some updates on the gallery wall in the dining room too.  Lot’s going on here!  Stay tuned for more kids!