Rebel Rebel: Bedroom Back to Black

I’ve got so much stuff around the house to share with you – little projects here and there that are started but maybe not quite ready or I just haven’t had the time to get my shit together get the room blog-ready or it’s not been sunny enough so the light’s not been great etc etc and so it awaits it’s debut.

But this weekend, I thought sod it.  I’m going to share, despite the fact that the room isn’t really ready.  I think there’s a danger of waiting until “perfection” before we can share in blogland.  I do get it, of course… we all want to look at rooms that are beautiful – we don’t want to see the pile of dirty laundry waiting to be done or stains in the carpet where the cat has puked and it just won’t come out.  We want to see rooms, styled to perfection, ready and waiting our ooohs and ahhhs.  Hell, I want that in my own home and I would love to show that to you on the blog.  But sometimes I think if I have to wait to go get some fresh flowers (mine are dying at the moment and I went to get more on Thursday AND Friday but they didn’t have any) or wait until Manchester actually has a FREAKIN’ SUNNY DAY, it just ain’t gonna happen. 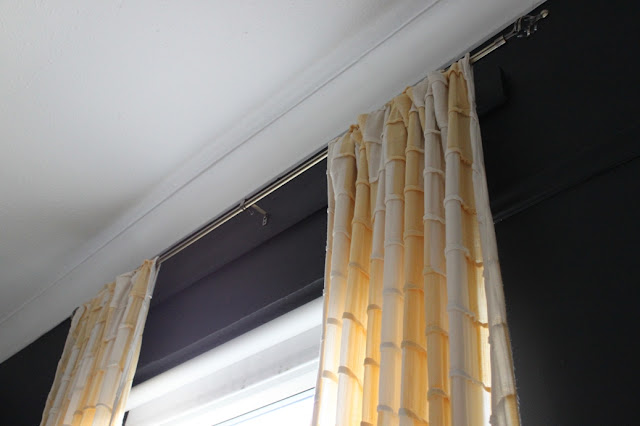 And so what you get, my dear ones, is real life.  I hope you are okay with me all keepin’ it real and all that around here.  Right, so all that said, on with the show.  Don’t worry, the post doesn’t contain any cat puke, I promise.

Man, I’ve got some PLANS for this room.  Seriously, I have a vision of what this room will eventually become.  But baby steps.  Mostly cuz I just don’t have thousands at my disposal to throw around and I’ve got a wish list for every room in the house a mile long.

But a couple of weekends ago, I decided that I really needed to do something about the curtains in the bedroom.  They were just too long.  I thought I liked the pooled effect but the more I looked at the ends of the curtains, dragging along the floor, the more it got too much to bear.

The curtain pole brackets were attached on the larger window to a piece of wood that sat parallel to the window frame.  You can kind of see it in this old picture from last year when we hung the curtains originally.

Do you see the big holes and bits that aren’t painted?  Yeah, that’s how they’ve been for ages now.  When the curtains were drawn, it was fine, but when they weren’t, all that crap was on show.  Not cool, man.  Not cool. 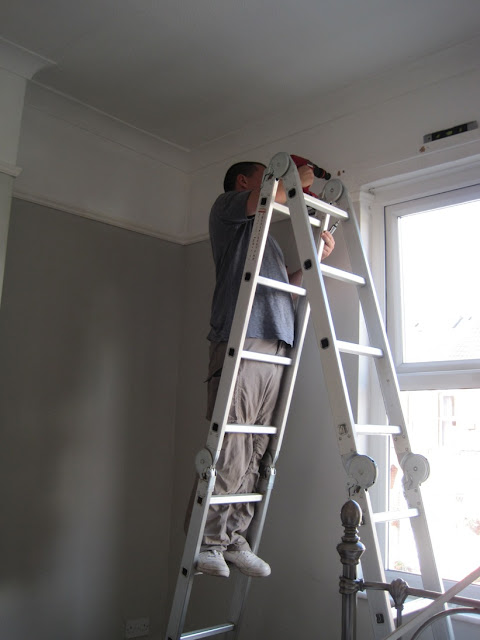 It was even worse on the other window where there was no bit of wood at all and the curtain brackets were starting to fall out of the wall (it’s an old house, everything needs reinforcement because the walls are just very old and crumbly).  Add to that the curtain pulls on the wall had also started to fall out of the wall.  Oh and everything was silver and I was going towards gold in this room…

So I decided a couple of Saturdays ago, that I was going to remove the existing bit of wood on the large window, pick up a couple new bits from Homebase, fill in the holes and rehang the curtains higher.  And while I was at it, I might as well paint the white bit above the picture rail in the same colour as the walls because that’d been bugging me as well.  And while I was doing THAT, I would also paint above the picture rail of the black feature wall.  Because that was annoying me as well.

See how it’s white above the picture rail?  ANNOYING. 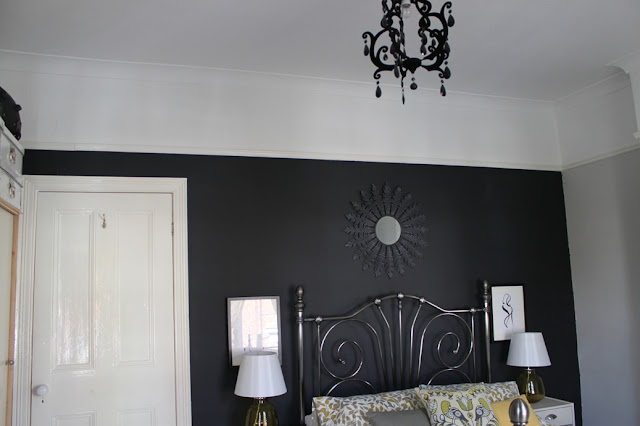 So I told W my grand plans for the day and he said 10 words that I never thought would come out of his mouth.  Ten little words that changed the entire plan of the room.  Ten words that made me move so quickly, he barely had them out of his mouth before the door had slammed and I was running to Homebase.

Those words were this:

“You can paint the whole room black if you want.”

“Yeah, I don’t mind.  If you want to paint the whole room black, you can.”

ZOOOOOOOOM!!!  (That was me running out the door.)

It had always been my ambition to paint the entire room black but W always objected.  He thought it would be far too dark, far too claustrophobic.  And I totally understand the hesitation.  It’s a big move to paint a room black.  It conjures up images of Gothic teens with black lights feeling rather sad and insular.  I mean, the Cure was the first band I ever saw live growing up (I was 16 years old – think LOTS of black eyeliner, hair dyed jet black and dark purple lipstick) but I’ve sort of outgrown that look now.  That wasn’t what I had in mind.

There are 3 reasons why I thought this room could take fully black walls:

1.  It’s a big room, the biggest in our house.  Not big by America’s standards, mind you, but pretty big by British standards.

2.  It gets loads of light.  There are two big windows and even on the darkest days, this room is bright.  The ‘After’ pics I’m sharing today were taken on Sunday at 5pm while it PISSED DOWN ALL DAY outside.  It was not a sunny day in the least.  And the pics still show a pretty light room.

3.  It’s got pretty high ceilings.  There’s no fear of claustrophobia when you’ve got a nice white ceiling so high above your head and pale beige carpet beneath your feet.

It took me ALL WEEKEND to get the room done.  Saturday was a lot of prep, filling cracks, sanding, getting the boards cut to size, sanded and up.  Sunday was just a lot of painting.  Like I said, it’s a good sized room and I spent most of my time just going up and down a ladder.

I love the way it came out though.  So right, ready to share!

Let’s look at the before first of all… 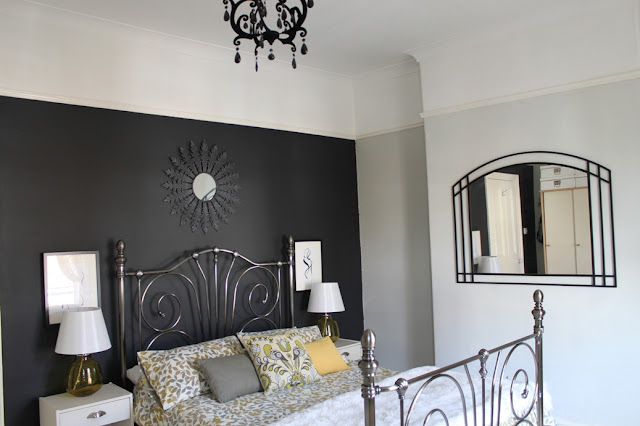 And what it looks like now…  I haven’t decided yet whether that mirror is going back on the wall or not.  Hmmm.  I would actually prefer a gold framed rectangular mirror hung vertically.  Someday, someday. 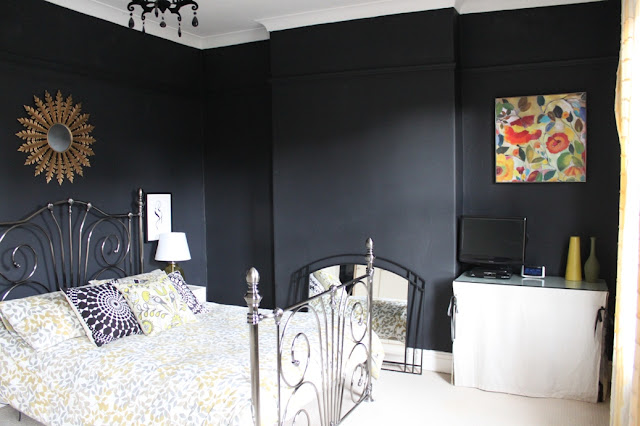 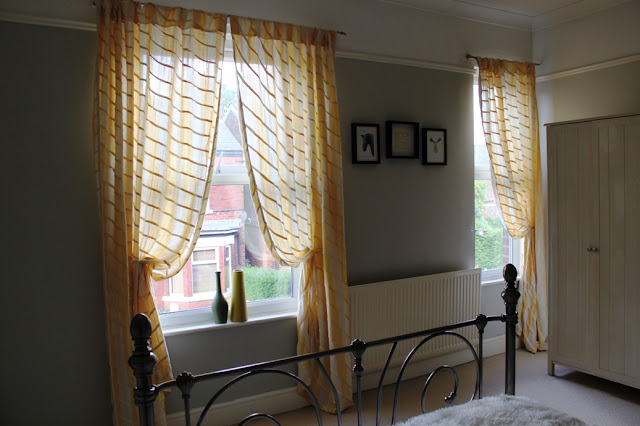 And after…  As you can see, I painted the radiator as well which I am SO GLAD I did because now it blends in rather than being the eyesore that it was before. 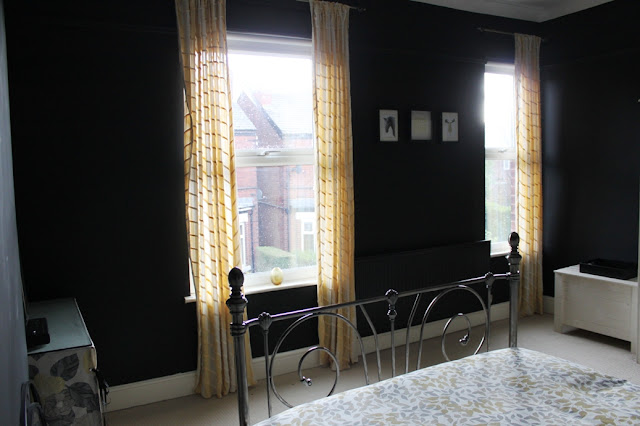 And a few others just to be gratuitous…  I added the black cushions to the bed a while ago.  I like how they tie in to the black walls now.  The crappy pendant needs to be replaced desperately.  I envision a gorgeous old brass chandelier.  Mmmm yeah. 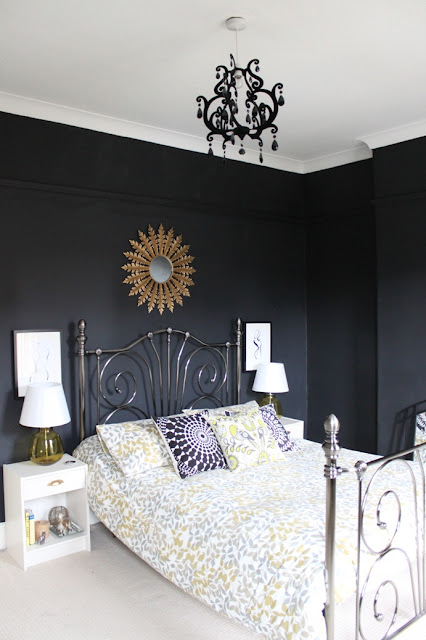 My new framed canvas as well.  I just loved the colours and want to eventually pull a few of these through the room like the red and turquoise. 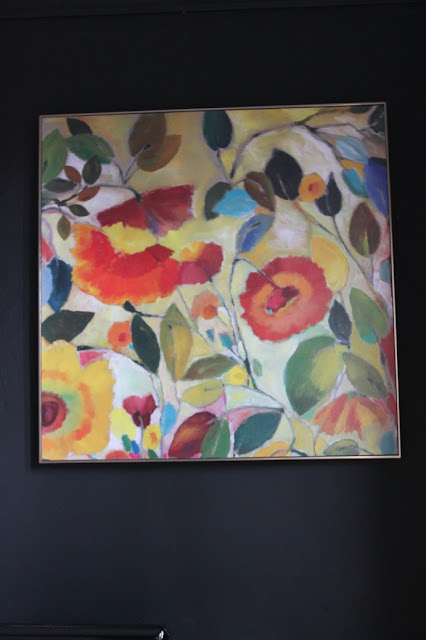 As you can see as well, I painted out the picture rail which I think looks better than dividing the room.  It adds architectural interest but in a subtle way. 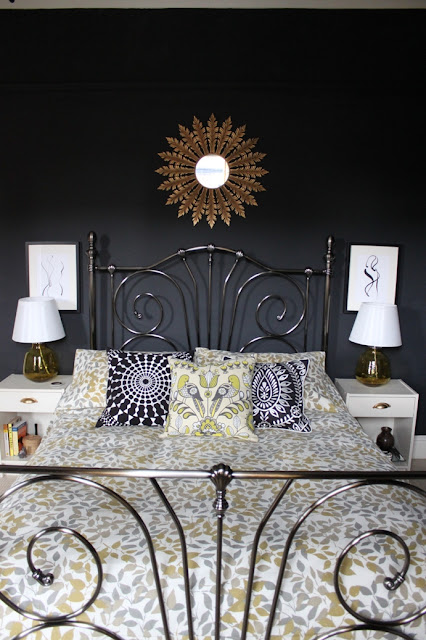 I also moved the little console table that used to be in my dining room in the corner of the room to house the television.  I like that the telly now just blends in with the wall so it’s less of an eyesore and the painting takes your eye away from it.  The console table will be replaced eventually with a wood chest of drawers – I have my eye on a couple at the moment on eBay.  It’s not been styled up yet though as you can see! 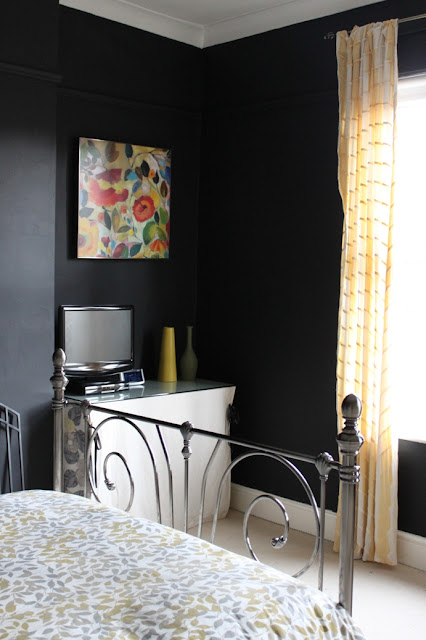 I know that a fully black room is not going to be to everyone’s taste.  I know there are going to be plenty of people out there that would have preferred the lighter grey as it was before.  But I do believe in staying true to what you love and not giving in to what everyone else wants.

And I do truly love it.  We are looking at getting a king size bed.  And I have my eye out as well for some new  (probably antique painted) bedside tables.  I also envision a gorgeous yellow velvet headboard which I’ll be getting custom made (again £££)… and new (antique) wardrobes but baby steps here.  The bedroom is black.  Rebel yell, baby.  Rebel yell.  I reckon my 16 year old self would have approved. 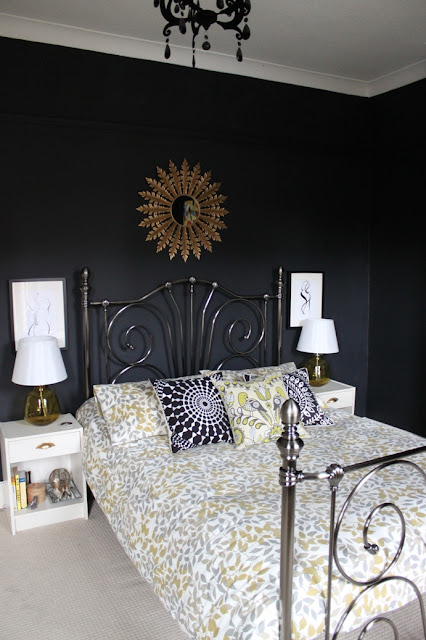