Before and (Almost) After: Weekend Back Garden Blitz (Part I)

I am SORE, peeps.  My shoulders ache, my back aches, the backs of my legs ache and parts of my body I didn’t realise could ache, ache.  But it’s a good pain.  A pain that means that something actually got accomplished this weekend.

It’s not done yet.  I will say that first and foremost.  To the point where I debated whether I should even share it at this point.  But I figured it was enough of a change to warrant a post and ya know, I’m all about the sharing here on Swoon Worthy, even if it’s just a little patch in the back of the garden.

See, the back of the garden has always been an eye sore.  A strange little spot marked off by a raised concrete platform and punctuated by old rotting logs, lots of overgrown weeds and a composter large enough for a family of 8 (graciously left to us by the previous occupiers of our home).  It wasn’t pretty.  And our decking faced this little crappy patch of land so I would sit out there of an evening and wonder what the heck we could do with it.

Here is my incredibly ugly before picture.  I actually didn’t even realise it was quite this ugly until looking through the lens of the camera – you sort of get used to ugly if you live with it for long enough, I guess.  I mean, I knew it was ugly, just didn’t realise it was THIS ugly.  Those of a sensitive disposition may want to avert your eyes now.

It was only after last weekend – a weekend of weeding and clearing and more soreness – that we decided we wanted some storage back there that the plans began to take place.  We ordered our wee little shed online at 11pm on Sunday night.  What do you mean you never impulse shop at that time of the evening?  It’s the human condition, of that I am certain.

So on my Friday lunch hour, whilst I was working from home that day and W had the day off to watch the races, we started to clear the space.  We removed the big concrete planters (HEAVY) and relocated a rose bush elsewhere and the rosemary to the opposite side.

The work continued once I was finished work and then again Saturday morning when the shed was delivered.  We had a bunch of leftover bricks (again left by the previous owners) that we decided to use as the base for the shed and W was thrilled when I suggested that we remove the old big rotting log on the other side and replace it with the rest of the leftover bricks so that there was some symmetry of the spaces.  This led to a big argument which I eventually won meant he then had to go out to Homebase and get quick-drying mortar (DIY Store Trip #1) and we went to work creating a little wall on the opposite side as well.

We then went to work building the shed which took about 4 or so hours. 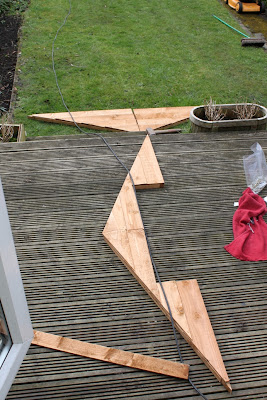 The cats were funny during this whole ordeal, constantly checking out the action going on outside, sniffing around and exploring every new bit. 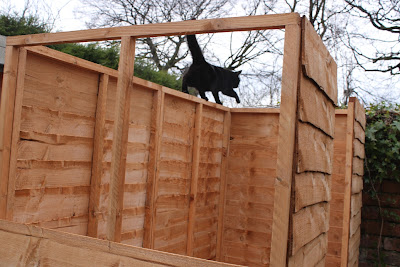 Saturday evening saw a trip to B&Q where we purchased two bright orange planters and two Azaleas for in front of the shed and a couple plants for the side of the garden.  We also purchased a new set of sheers and a new rake, both of which we realised we desperately needed during our outdoor adventures (DIY Store Trip #2).

After we got back home, I was contemplating what to do with the little (now very muddy) patch of land in front of the shed which looked a little sad and awkward and I decided that a few pretty pot plants might look nice in front of it… I then had the amazing revelation of creating a little space in front of the shed and getting rid of the awkward ‘walkway’ that led to nowhere by using some nice stone to cover it all up.   It meant that where the stone ended would be in the centre of the garden (yay symmetry!).  This also meant that the ugly grey edging would have to go, replaced by something that tied in better with the brick work.

So Sunday morning we were back at Homebase, purchasing a couple of bags of stone and 6 feet of new edging (DIY Store Trip #3).  I went to work digging out the extremely deeply set old edgers in about 2 feet of MUD (oh my god, I am so not used to manual labour – thank god W came and helped me pull out the final few as I was ready to collapse).  The area was then levelled, the new edgers went in, the stone laid and I potted the azaleas.  I also bedded the other plants I’d purchased for the side of the garden.

Sooooooo, we’re finally at the after (and if you just skipped all that waffle and went right to the bottom pictures, it’s fine, I understand)… 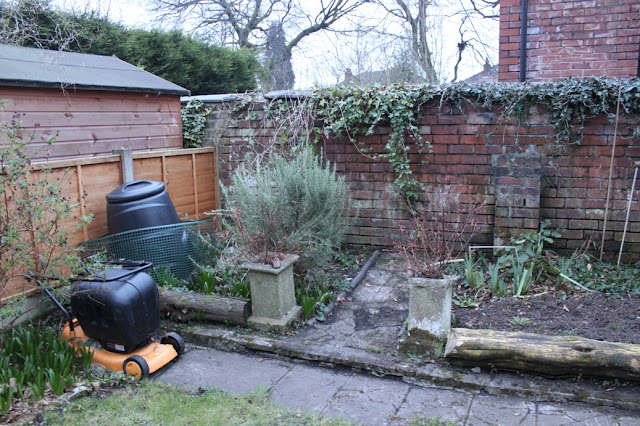 I added some old fabric I had hanging around at the windows, but again, that’s just temporary until the rest of the work is done.*  Once I get the outdoor fabric I have my eye on, that will change.

*I originally had a bright cute-sy fabric with pink and orange flowers at the window but W made me take it down because he said it was a shed, not a Wendy House.  Oh well, can’t win ’em all. 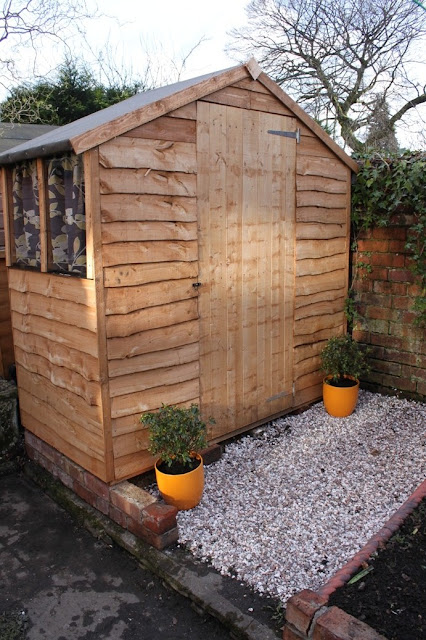 So what’s left to do with this little patch?

I also want to do something with the opposite side now.  The mass of soil in there has always basically been the cat’s ‘litter tray’ (sorry, gross I realise) because it keeps them from digging up the neighbour’s gardens as well as our own.  So we need to maintain a small patch of dirt for them but otherwise, it’s quite a big space so we’ve been talking about putting down some paving stones and creating a wee seating area as the morning sun often shines on this little spot in the summer.

So as you can see, there’s still plenty more in store for our little spot but for a weekend’s work, it’s not too bad going and I hope it inspires you that it’s worth addressing even the saddest little neglected space.  I’ll share soon the rest of our plans for the garden and some cute things I’ve seen in my gardening travels on the interwebs!

What did you get up to this weekend? Anyone else tackle their garden?  Or perhaps your life is much more rock and roll than ours?  Do share… the comment box awaits!