They seem to be everywhere.  In every designer’s secret stash of accessories, they add texture, pattern and that certain je ne sais quoi.

Sometimes trends we see are so HOT they suddenly become a bit lame.  Well, whether you think this is a trend that’s developed cult-like classic status or so sick of it, you can’t bear another image without a certain amount of snark, there doesn’t appear to be any let up.

And I have to admit, I’m rather enamoured myself.

I’m talking, of course, about the python tray (or snakeskin tray as its also called)…

It’s a trend that seems to work in nearly every setting… from barcarts to bathrooms, dressing rooms to coffee tables, sideboards to offices and everything in between.

I can’t actually tell you HOW it works (oh sure you can SAY it’s classic monochrome with texture but personally, I’m thinking MAGIC FAIRIES), just that it quite obviously does.

It doesn’t hurt when what is carried INSIDE the tray is gloriously fabulous of course.

And it does seem that gorgeous pink peonies certainly up the ‘X’ factor as well.

Or a sparkling collection of perfume and jewelry.

But whatever it’s contents, the python tray seems to be the magic bullet of pretty texture and style – the ability to transform a mixed assortment of items into a structured sexy collection.

As like so many of the trends I admire from afar, I just don’t see them here in the UK.

Well, not until I visited Zara Home (a new favourite, I have to admit) and I found my own little bit of snake-y yumminess. 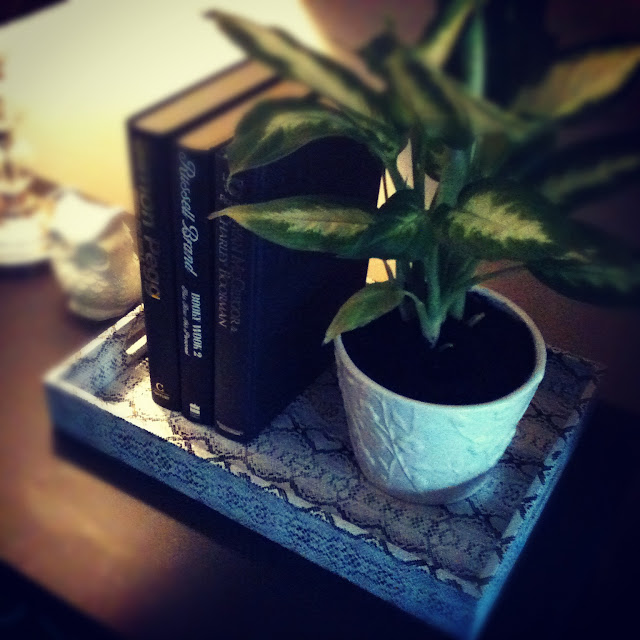 So it’s not EXACTLY like the trays I see everywhere in the blogosphere and I don’t even know if this is where it will stay but I am loving it nonetheless.

Don’t hate me for jumping on a trend bandwagon – I’ve never claimed to be a trend-setter.  In fact, I feel like I’m extra late to this particular showing.  But I do think it’s rather lovely.

Do you have a python tray in your own home somewhere?  Are you sick to death of seeing them?  Do you think sometimes being heavily influenced – as I am – by trends we see in the blog world mean we are over-saturated with ideas used over and over?  To be honest, I don’t know anyone personally who has one so does it still mean they’ve gone from HOT to NOT?  What do you think?