Cheap and Easy Before and After: DIY Antique Gold Starburst Mirror

You might recall from previous posts about my bedroom that hanging above my bed is a starburst mirror.  I bought it ages ago from Really Linda Barker for less than £20 and originally quite liked the subtlety of the dark grey iron against the black wall. 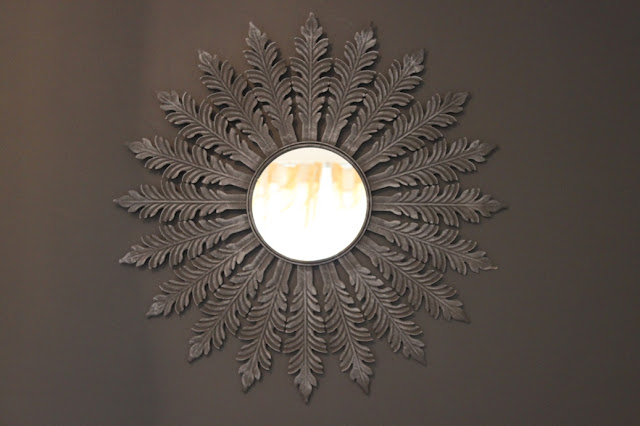 But then something happened.  As these things do.

Ya see, I saw this image.

And a voice in my brain said, “I NEED A BIT O’ THAT IN MEH LIFE.”  (Yes, it was a very direct, very shouty voice and it may or may not have had a Scottish accent for some reason.)

So of course, I had to listen.

Disclaimer:  Bear in mind, this room is SO NOT DONE.  We are currently saving our pennies for a king size bed which means the bed will be replaced (yay!).  I’ve also been keeping an eye on eBay for some cool cheap bedside tables that need some lovin’ as well.  Of course, there are loads of other upgrades this room is crying out for (including new wardrobes, some kind of seating etc) but ya know, I might as well show  you what I did with the mirror.

So the first step was take my handy-dandy Montana Gold Gold Chrome spray paint and cover that sucker completely with gold paint.  What I failed to do was take a picture of this step because I’m a bit of a div sometimes. 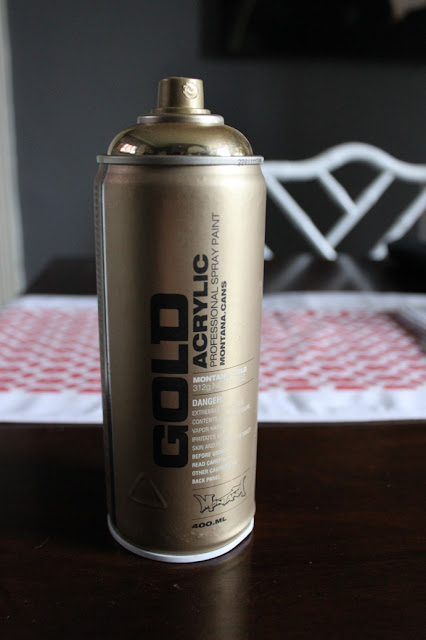 I initially and quite foolishly thought that that would be that – a bit of spray paint, good as gold.  (geddit?)  But alas, the finish looked a bit too fake and the gold paint too flat.

It needed antiquing.  Badly.  So let’s pretend somewhere around here, there is an image of a really brightly shiny gold mirror.

My second step (about a week after the first step and this is why there are no pictures of the first step) is that I finally got out the Rub N’Buff which I got for Christmas and hadn’t yet used (such was the power of the Montana Gold, I didn’t see the point) and concentrated it mostly around the centre portion of each individual ‘ray’. 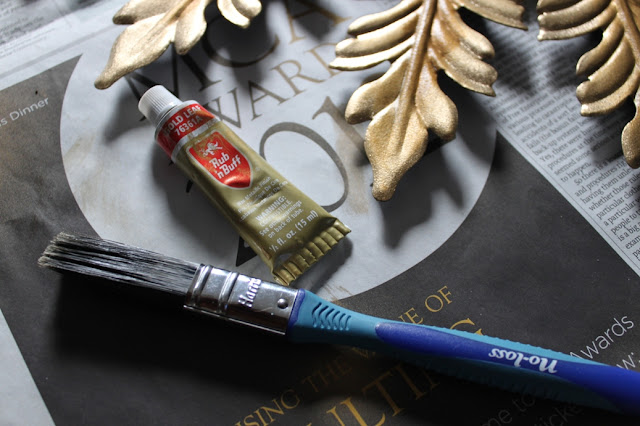 While this toned down the brightness of the gold (leaving only the far edges of each ray untouched), it didn’t quite give me the antique look I was hoping for.

So I did a bit of scrounging around in the paint shelf in our cellar, hoping for some brown paint I could thin down.  While I couldn’t find brown paint, I did find this. 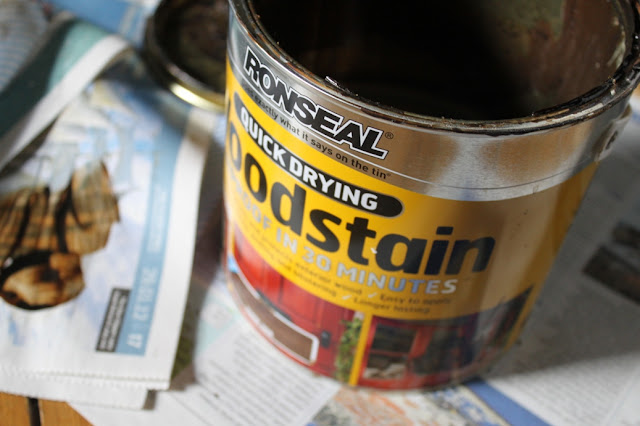 Yes, that is floor stain.

I figured, worse comes to worse, it doesn’t quite work how I imagined and I buy some brown acrylic paint.

I took a small brush and went to work, concentrating on the centre of each ray and blending out as I went along so that – as would have occurred naturally – the ends stayed quite shiny with the more detailed areas inside of each ray going a bit darker. 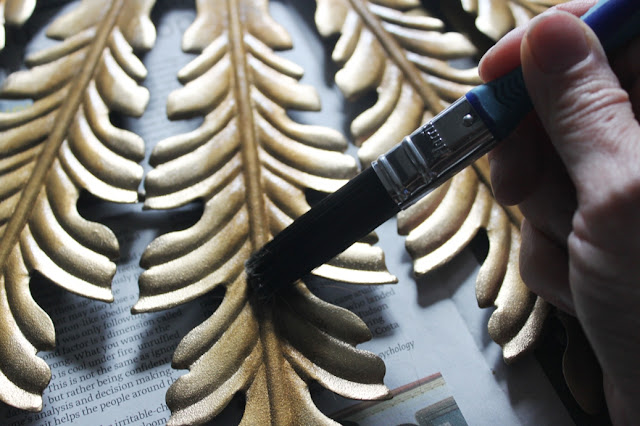 (As an aside, I originally applied the paint and tried just using a cloth to wipe it off but it didn’t work – this method allowed me to control how much antiquing I wanted much better than the wiping method.)

Now I know there are probably 30 different products on the market I could have used to get the same result but you have to bear in mind, I didn’t really fancy purchasing anything for this one.  This makeover was gonna cost me zero, nadda, zilch, nuttin.

And I have to say, once dry, I was incredibly happy with the result – it gave me that antiqued look I was going for.

Just for comparison, here’s the before… 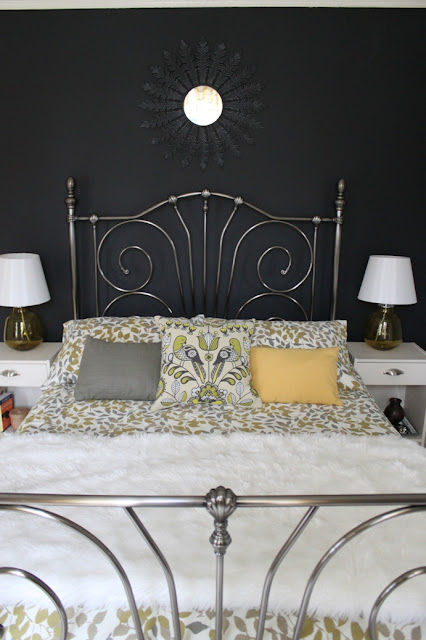 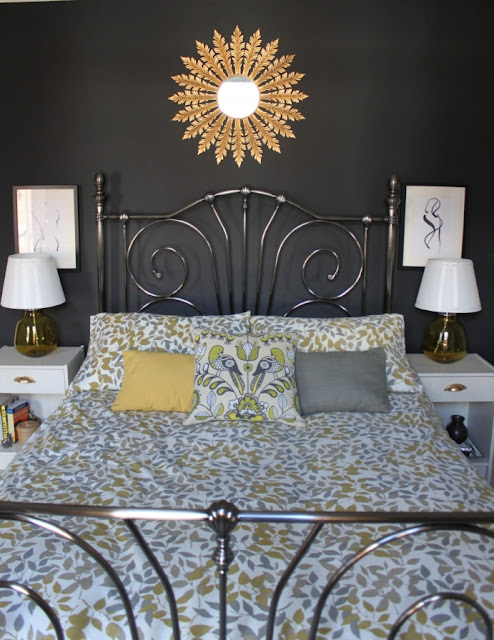 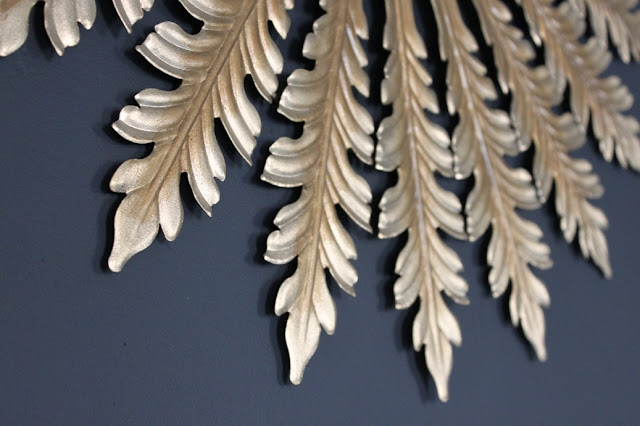 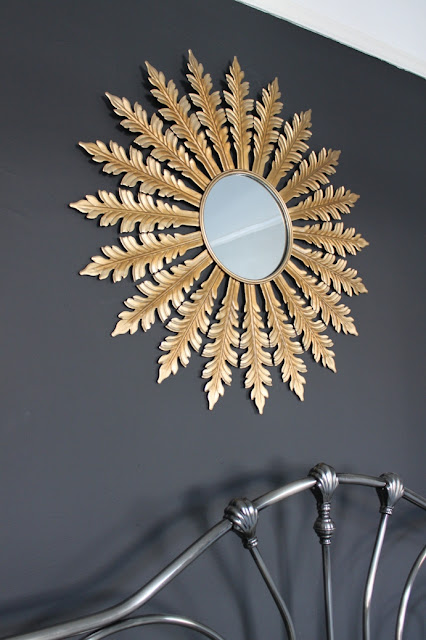 For the eagle-eyed among you, you might have noticed I also sprayed the handles on the bedside tables gold although the expression “polishing the turd” comes to mind.  It does, however, tie in better with the mirror. 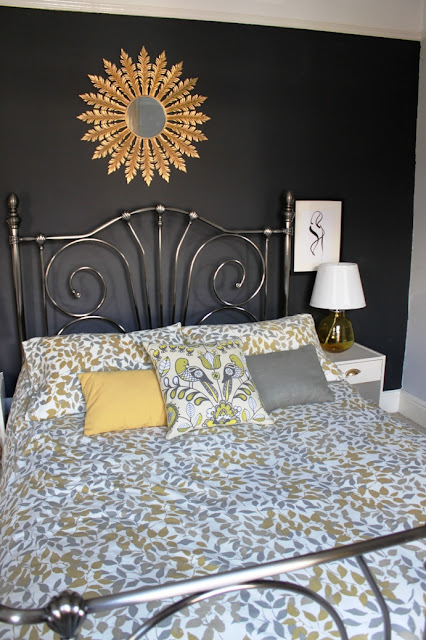 And now, all I have to do is get that antique nickel bed outta here.  And before you suggest it, I have considered spray painting the bed but as I’m not planning on keeping it, I imagine I’ll have a better chance of selling it if I don’t mess with it too much.

So what do you think of the antique job?  Maybe you prefer the dark colour better?  Admittedly, I don’t think there was anything particularly wrong with the ‘before’ but I do really quite love the ‘after’.  Antique anything lately?  Any handy tips on your own method?  Do the voices in your head have accents?  Go on then, spill it in the comments.

By the way, here’s a fantastic article all about how bloggers love comments, as if you didn’t know… but really, it’s a very worthy read.   I know there are lots of you that just come to read and not to comment but it would be so great to involve you in the conversation… so go on, get involved. 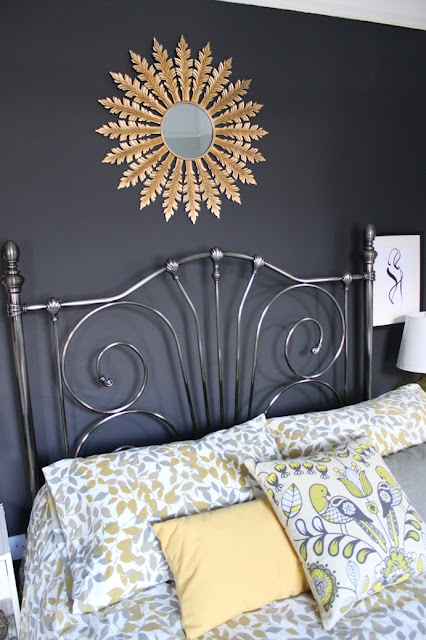