I So Wood: Decorative Logs (and Smoochie Thank Yous)

Firstly, I just wanted to say a massive thank you for all the lovely comments, Facebook messages, emails and Tweets I had regarding my new little business venture I spoke about on Wednesday.  Your support means the world to me and I mean that from the bottom of my little bursting heart :) So thank you.Also, it was my birthday yesterday and I had lots of lovely messages wishing me a happy day – and it was, despite having to go to work! So thank you for such thoughtfulness there as well.  You guys rock my world.
Right.  Enough gushing.  On with today’s post…

My home was built in 1906.  I imagine when it was built, it had lovely Edwardian fireplaces in the living room, dining room, master bedroom and guest bedroom.  Unfortunately, fast forward to June 2010 when we moved in and every trace of them had been removed.  Sigh.

It’s such a shame because of anywhere in my house, I would love to have a fireplace in my living room.  Unfortunately, what we were  left with is a very strange awkward ‘hole’ where the fire place once was.  Yes, we could always reincorporate a fire place but well, that costs money and at the moment, we simply don’t have it.

And so, over the past year and a half, I have tried my hardest to use it as some kind of ‘shelf’ or something and created various vignettes…  none of which I’ve been particularly fond of, if I’m honest.  It’s not the items IN the hole, it’s the hole itself.  It’s just wrong. 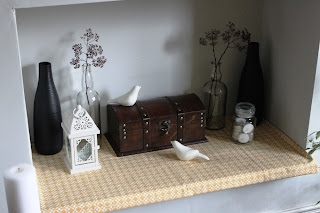 So one thing I’ve been considering is filling it with decorative logs.  I just love the natural texture it brings to a room.  Here are some inspiration pics to give you an idea of what I’m looking for…

I’ll be honest, I can’t see myself rockin’ up in some woodland somewhere and choppin’ myself a tree and cuttin’ it up.*

The biggest reason for that?

So therefore, I’ll probably have to buy them from a company that ‘specialises’ in this sort of thing (they dry them out and sand them down and make them all pretty for you).  At nearly £100, it won’t be cheap but it will be a lot cheaper than fitting a fireplace and a lot easier than dealing with spiders (shudder).

What do you think?  Is it worth spending the money for ‘pretty’ logs that will never be burned?  Or do you think it looks a bit silly in an obviously unused fireplace?  Have you ever used logs decoratively?

*I have no idea why I went all Southern American there.  My sincerest apologies.