This is going to be just a big mess of a post because there’s a bunch of stuff going on at the moment in my dining room in terms of little changes here and there so bear with the rambling post!

I was looking at some old pictures of when we first moved in and realised that whilst we’ve not really spent a lot of money at all on this room (not like the kitchen and living rooms which had a budget associated with each over a given time period) we’ve actually made quite a bit of progress just making a lot of little changes as we went.

So I guess I’ll start there and then talk about some of the detail after that!

So we’ll start with the view into the kitchen… 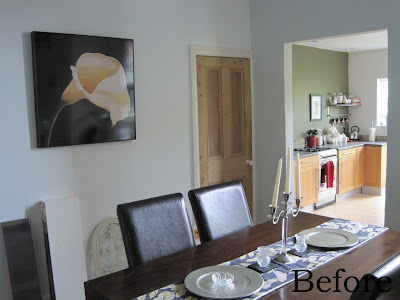 I love that you can really see the difference the white kitchen now makes!  Holy brightness Batman! 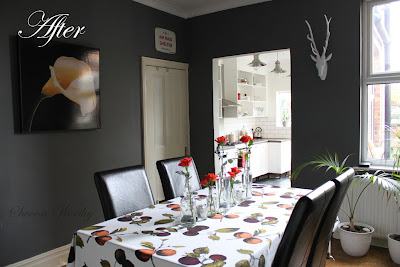 This shot is notoriously difficult to take only because the window tends to blow it out but you can see there was wallpaper in the alcove on the left (There was no sign of it anywhere else in the room which begs the question why anyone would use wallpaper only there?). 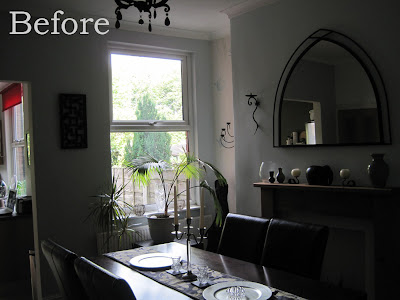 Wallpaper was painted over (I actually forgot it had been there, you really can’t see it at all with a coat of paint over it) along with all the trim and the mantle and of course, STUFF was added. 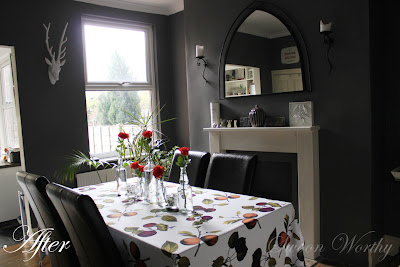 So here we see the final before and after of the dining room and I have to say, this is really the biggest change.  Having a television in the dining room was W’s idea so my challenge was finding a way to either blend it into the background or work it into the design.  My original idea was to use a patterned wallpaper here but once the paint went on, I knew I wanted the whole room in the same colour. 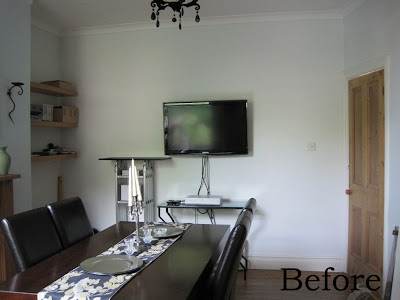 And so, the idea of a gallery wall was born.  I think it adds a lot of personality to the room and so what was originally an eyesore has become one of my favourite things about the room.  And I have to admit, it’s great having a telly in here because we end up spending a lot more time in this room than just to eat meals.  It’s really become the main hub of the whole house. 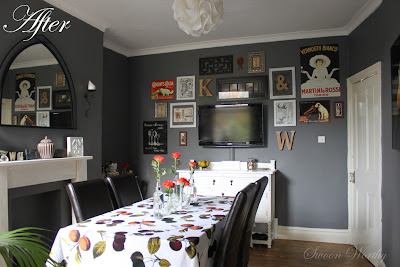 It’s amazing what some paint and a few accessories will do, dontcha think?

So those of you that may have been following me for a while may have noticed I’ve added a few bits to the gallery wall.

I’ve always really loved vintage advertisements so I’ve added a couple of them to the wall. 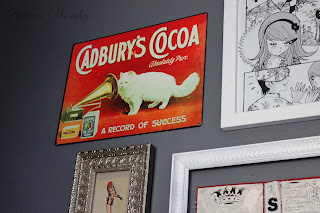 I also got this great vintage ‘Air Raid Shelter’ sign but W suggested putting it above the cellar door instead!  I think every room should have a bit of humour, don’t you? 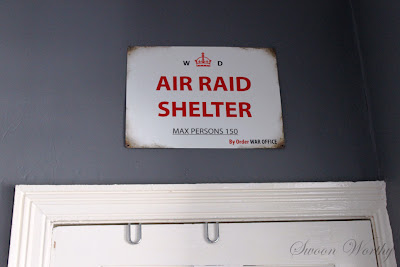 Back to the gallery wall… I also got this wooden sign at a visit to a new interiors shop in Cheadle Hulme called ‘Homebird’ (cute name, no?).  Both me and W really like to cook so I thought it was appropriate in the dining room!  It’s made from bits of wood and has a bit of a chalkboard look (without the mess).  The £29 price tag wasn’t too bad either. 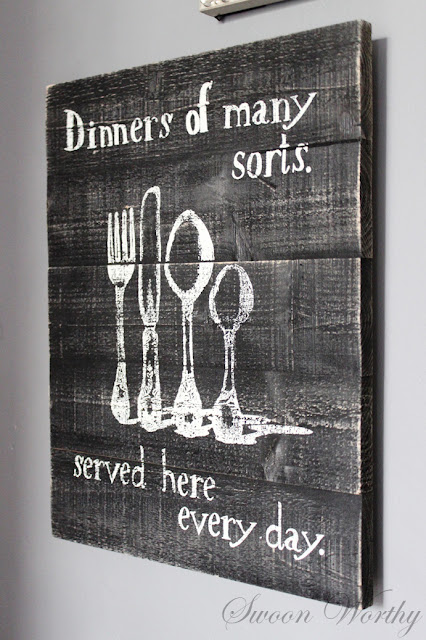 A few weekends ago, I cleared out the only closet in the house (in the guest bedroom) and found these two tiny framed prints that I bought way back in 2001, the first time I went to Prague from the little market traders along the Charles Bridge.  I like that they fit the mostly neutral scheme that’s going on. 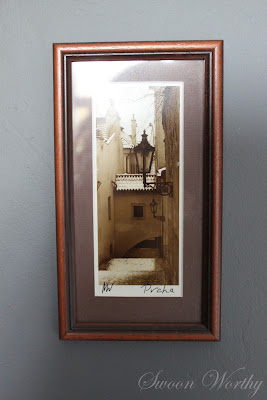 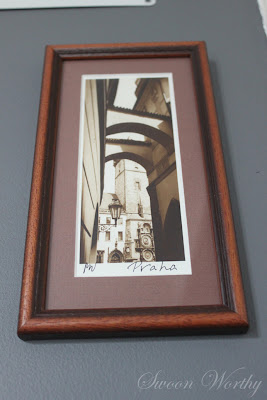 So here’s how the wall is looking at the  moment with those additions and a couple things shifted about.  There’s still gaps and holes to fill in and some of the items will inevitably be replaced but at least it’s coming along! 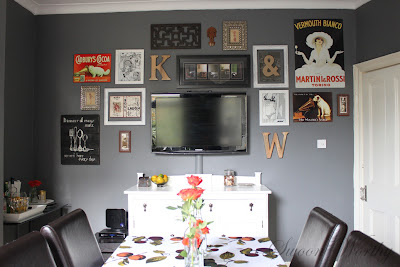 Let’s see… what else.  I purchased these lovely little reddy-orange roses from ALDI – 10 for £2.  Yes, seriously.  Hey, I’m not too proud to buy my flowers at the cheapest place in town.  They are lovely, aren’t they?  And for 20p each, I’m certainly not gonna argue. 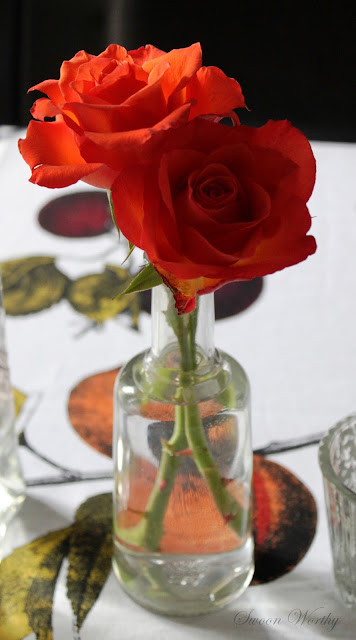 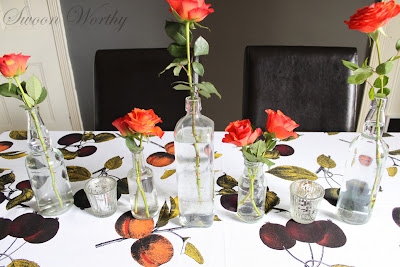 Oh did you notice my new autumn tablecloth?  H&M for £20 (although it’s in the sales now for £7.99!).  I really love it because the colours just work so well with everything else in the room and it’s a nice thick cotton fabric. 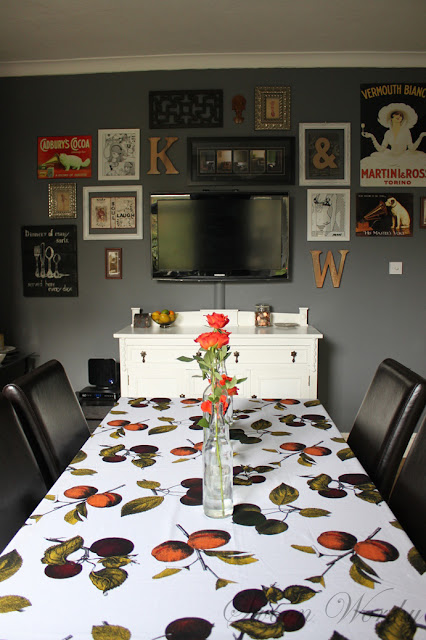 Oh I also had to move the console table from under the window (where I prefer it) to the alcove because W said it was blocking the heat from the rad and it does get awful cold in here.  When I moved it over to the corner, I felt it looked too heavy with the table cloth on it so I’ve removed it.

It’s not great there but well, I suppose it’ll do just for the winter.  Once it warms up again, I’ll put it back where it was! 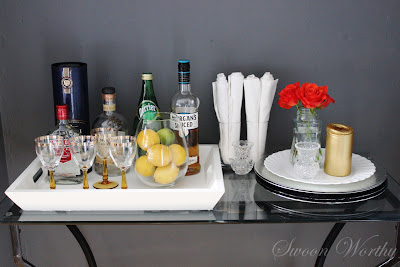 The tray, which had been through a rather disastrous paint job has been repainted white for now but I have some plans for it so stay tuned for that.  The little gold candle was from a recent trip to IKEA. 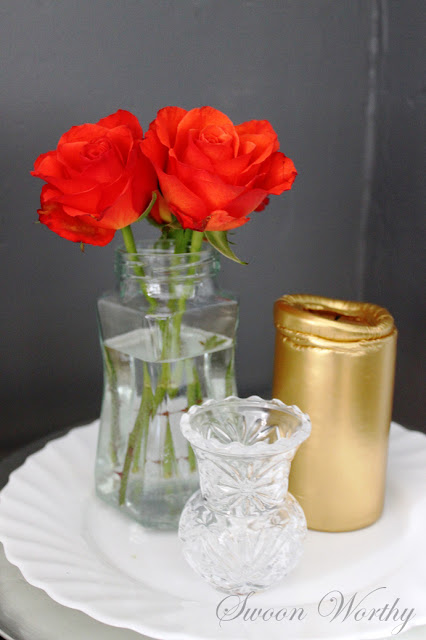 I also recently bought these little wine glasses from eBay for a fiver!  Probably not surprising considering my obsession with all things gold.  I love them, they just look so cute and I think they’ll look lovely on my Christmas table for a bit of added sparkle. 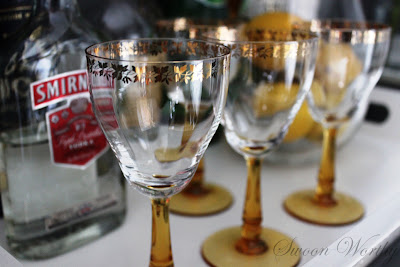 Oh I also got this little heart dish for £4.50 from the same interiors shop in Cheadle Hulme for W because he was always dumping all his change on the console table.  So now he’s got somewhere to put it!  The dish is a perfect shade of greige. 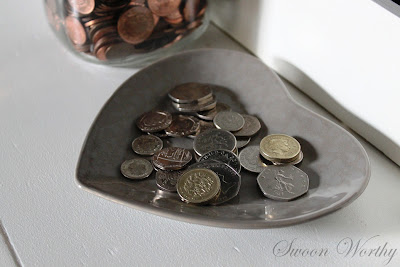 So as I warned you, apologies that this post is sort of all over the place!  It’s been a while since I showed my dining room but I needed to catch y’all up!  (“Y’all” is such a good word and I have yet to find a good alternative expression in England so it’s staying in my vocab, dammit.)

I think that’s everything!  I think I like that the room has a real eclectic style which is exactly what I was after in this room.  The floors obviously are a total mess but that’s a project we’ll be tackling next year.  I also need a rug to sit under the dining table.  And eventually, I’d like to replace the Parson chairs.  Oh and we need a new light fixture in here.  I’d also like to change out the mirror that sits above the mantle.  Ohhhh and we need some kind of window treatment… So erm… yes.  Still plenty to do.

That being said, what do you think of my recent bargain purchases?  Any thoughts on the progress so far?  Do you have any rooms that have just been worked on slowly and realised some time later how much progress you’ve actually made?  Do you buy all your flowers at discount shops? Go on, share in the comments. 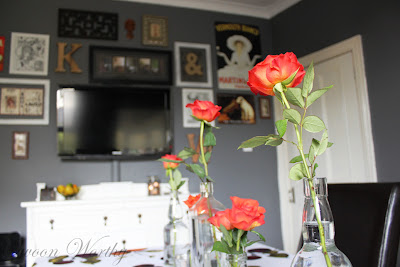 PS. You might notice that I’ve started using a watermark on my photos.  I’m going to try to remember to do this from now on after reading a couple horror stories on line of people’s blog posts being stolen and passed off as someone else’s.  Hope it’s not too distracting or annoying!

PPS.   I also realised after a bit of wandering around the blogosphere that I’ve been replying to loads of commenters via email and they’ve been being lost in the ether!! Oh my god, I’m gutted!  Here’s the thing – unless you set your blogger profile to receive emails, then you are not able to receive replies to your comments.  I feel terrible because I reckon people think I’m well rude, not replying to them in the comment section but I know not everyone will go back to check and see if they’ve received a reply.  I try to reply to as many comments as I can so please do go check to ensure you’ve got an email address associated with your profile so I can respond personally :)  If you are afraid of loads of spam, I have to say, from my experience, I rarely get any so it’s all good baby.