I have been looking for a new, inexpensive duvet and pillowcases for the guest bedroom for what feels like forever.

The issue has always been that despite the fact I was easily able to find sets that incorporated some red within their patterns, everything I found that I liked within my meager budget seemed to have a cream background. I couldn’t find one for the life of me anywhere that had red in combination with pure white.  Mad, isn’t it?  And I’m telling you, I was looking EVERYWHERE.  I just didn’t want to spend upwards of £70 for something that will only get occasional use.  Not saying that my lovely guests wouldn’t be WORTH that.  I just didn’t have it.

The set of linens that had been on the bed since my intial go at zhushing up the guest bedroom was from Sainsbury’s.  I’d picked them up on clearance for a mere £7 one day out of desperation as I was due for company that evening. And despite the fact there was absolutely no red in the stripey pattern whatsoever, it still kind of worked. And, let’s be honest, it was a lot better than what was there previously… but I knew that this particular set was never going to be a permanent fixture.

Enter the saviour of inexpensive delights, good old Ikea. I found this duvet cover in a lovely thick cotton fabric (it really is lovely and heavy to the touch, the quality is suprisingly excellent) with 4 pillowcases for a mere £16. Oh I do sometimes love you Ikea. 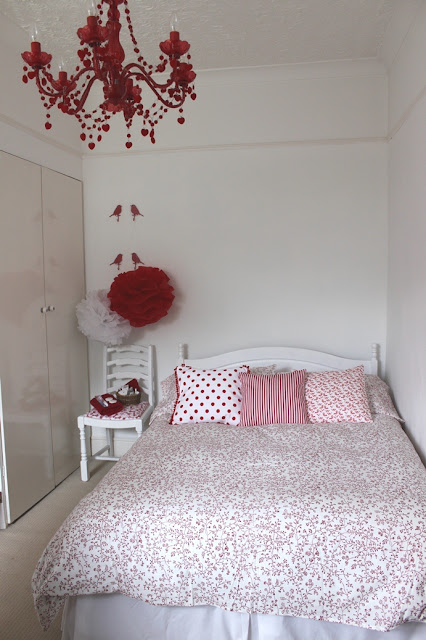 The colour is slightly darker – more of a scarlet than the cherry red in the rest of the room but I like the look of layered shades in here.  And we’ve had guests to stay since I purchased these and they commented how nice the bed linens were.  I know I should have just said, ‘Oh yes, darling, only the best for you!’ but like a total mug said, ‘Oh I got them from Ikea!’  Way to make your guests feel important, Red. 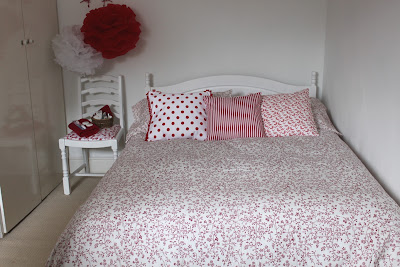 I’ve added the red and white paper flower pom poms that were leftover from my Anglo-American party because they just looked cute there.  I may hang them over the bed but wasn’t sure if it would distract from the chandelier?  Hmm. 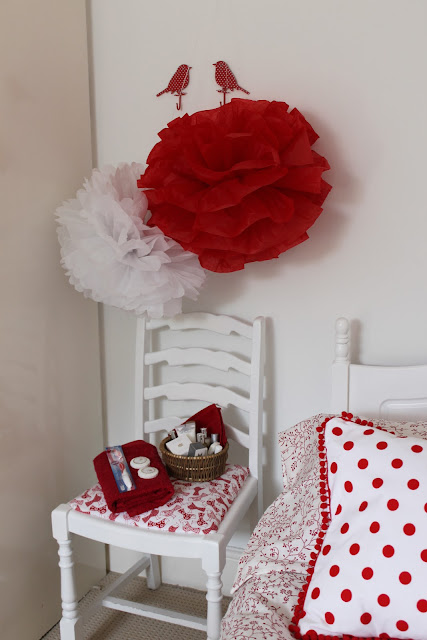 Just a small change sometimes makes a big difference, doesn’t it?  And there is still more to come for this room in the way of this cute wallpaper…

The room still needs a mirror and I need to find SOMETHING for the wall above the bed.  And we’re looking at moving the ugly desk and chair that’s currently in residence in this room that I hate (they are W’s and they have never appeared on this blog!) down to what will eventually be ‘the man cave’, aka, the cellar.  So that will leave a bit more room for me to put something rather pretty there in it’s place.

So have you scored any bargains at Ikea lately? What do you think of my bargain buy? Maybe you prefer the old duvet? Do share in the comments… 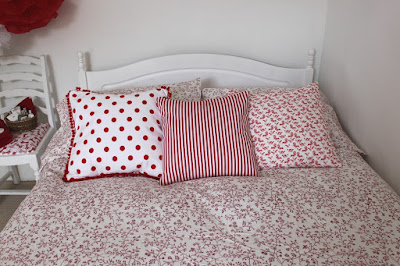