Before and After: Wallpapered Chest of Drawers

So I did a little refresh over the weekend involving some new hardware, a bit of paint and some wallpaper that I already had.

Here’s the chest of drawers that got the treatment.  You might remember it previously from my dressing room. 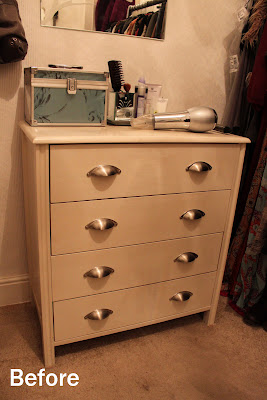 I decided quite some time ago, however, that I really needed something larger in the dressing room.  Plus, we desperately needed something to hold DVDs in the living room and this little pine dresser which I’d bought and painted way back in 2006 fit the alcove rather nicely.  I’ve mentioned before how I hate the types of DVD storage units available on the British High Street. 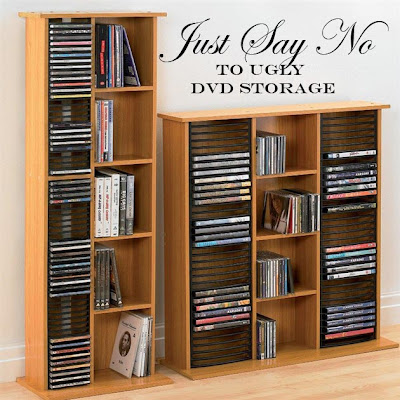 As you can see, however, the corner has been crying out for SOMETHING for the last year… 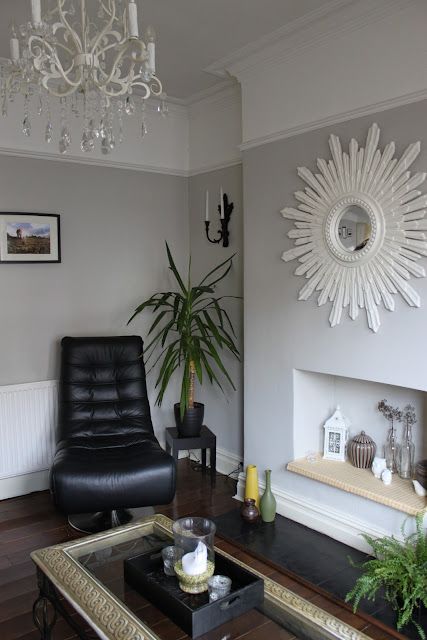 So it was always in the works that I would buy a piece of furniture from eBay or thrift to refinish for the dressing room and this chest of drawers – in some way reimagined – would find a new home in our living room.

It’s a very inexpensive chest of drawers, really. I think I bought it from a big chain store unfinished for about £65, slapped on some white paint, put new pulls on it and called it a day.

I thought it was time it was given a bit of prettification before it was moved to the living room.  I played with the idea of doing a harlequin pattern on it but firstly, it was going to be too difficult (let’s face it, I don’t like math and math was required) and secondly, W poo-poo’d the idea.  So I had to consider something a little less mental.

On a side note, W really just wanted to keep it white.  I didn’t, not only because that’s no fun, but because the television is black and I felt the room was too ‘heavy’ on the right hand side of the room so we needed something to balance the left hand side.  I decided to go ahead and start the project without him knowing what I was going to do but hey, he needs to trust me, right? ;)

I decided to use wallpaper to the drawer fronts so only the ‘frame’ received a coat of primer.  I didn’t even sand it.  Maybe if you are following my lead and are going to try it yourself, you should consider sanding but it was raining out and I didn’t want to cart the thing down the cellar stairs so I just was being lazy and skipped that step.  I slapped on a coat of oil-based primer (this, however, is VITALLY important – do not use water based primer on glossy paint or else you’ll be there all day trying to get it to stick) and left it overnight to dry. 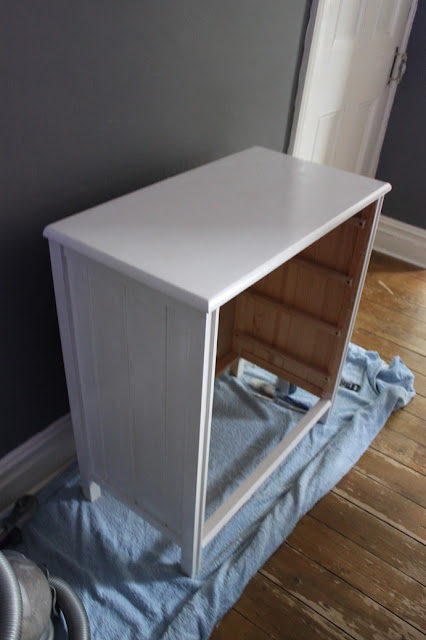 The next day, I gave it two coats of flat emulsion in Dulux Night Jewels 1 (hint: it was leftover from the project I alluded to last week).  It’s pretty much as dark as you can get without going completely black.  And yes, you can go over oil-based primer with a water-based emulsion.  Honestly.  First coat looked a bit dodgy, to be fair, but the second coat went on like a dream.

Another little side note:  I used Dulux Night Jewels 3 for my dining room walls which you can see in the image below.  It’s a great range of greys with just enough warmth to not make it look too blue or too red.  The Perfect Grey in my book, for whatever it’s worth. 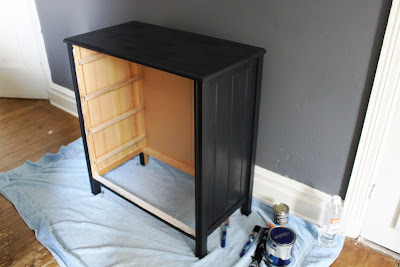 For the drawer fronts, I first laid out the wallpaper pattern side down, making note of where I wanted the pattern to start on the front of the drawers.  I then traced around each drawer in succession to ensure continuation of the pattern and then, cut the wallpaper to size.  I initially tried to use an exactoknife around the drawers to start with but I couldn’t get a clean enough cut, so tracing it with a felt tip pen and cutting it out worked a bit better for me.  Then, I used a foam brush to put a thin coat of Mod Podge on the drawer fronts and glued the wallpaper in place, ensuring there were no bubbles.  I left them overnight to dry as well.  The next day, once the paper was completely dry, I trimmed any excess from the edges just to neaten the lines. 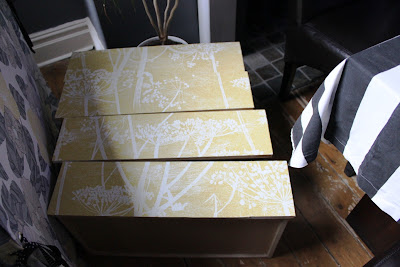 Want to see the end result?  Well of course you do.

Here again, is the before…

And here’s the finished piece in place. 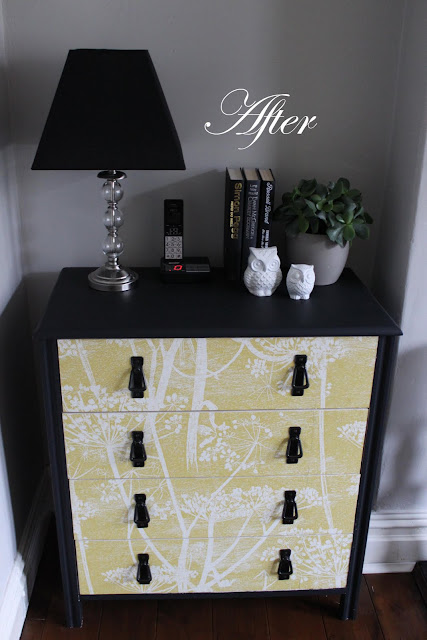 It makes such a difference to the room. 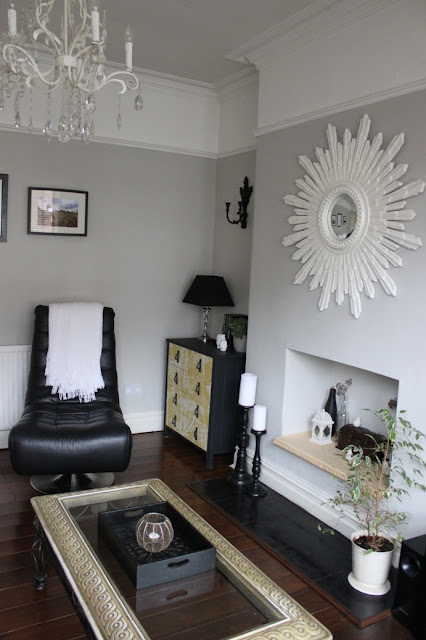 And I think the ‘balance’ of the room has been restored.  Happily, W agrees. 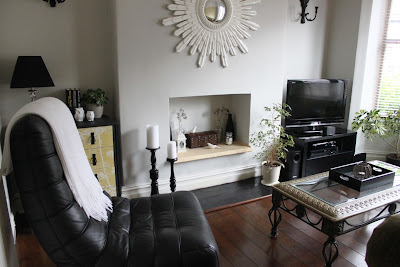 It was a very simple project really and the best part was that almost everything I used I actually had on hand. The only thing I purchased for it was the pull handles. 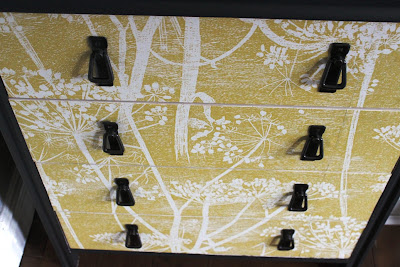 So I decided that the room needed a little refresh.  Nothing major, mind you, I just felt like I had too many surfaces covered in STUFF so I’ve majorly pared back what is on show and swapped things around a bit.  It’s hard for me to do this, being the total maximalist that I am, but I think restraint is probably a good thing.  I’ll never ever be a minimalist mind you but I do need to reign myself in sometimes. 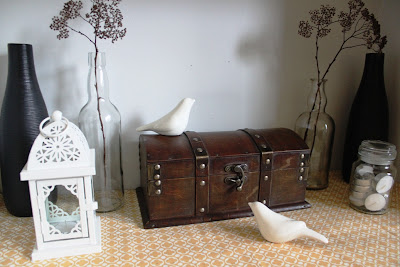 And the side table under the bay window…

And I pretty much cleared the coffee table completely… 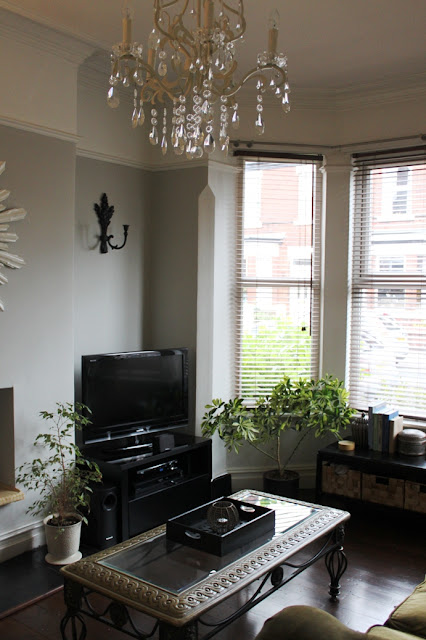 So, while you probably can’t tell it’s much different, it just feels a bit cleaner to me.

I do love the way the wallpaper matches on both sides of the room now.  I know, matchy-matchy is normally a very bad thing, but in this case, I don’t care. 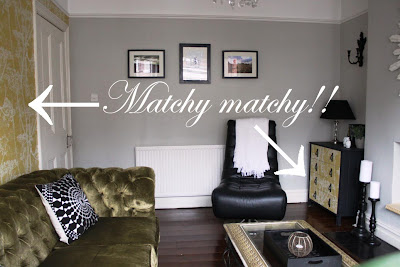 Here’s a gratuitous shot of my sofa, just because after W, it’s my one true love. 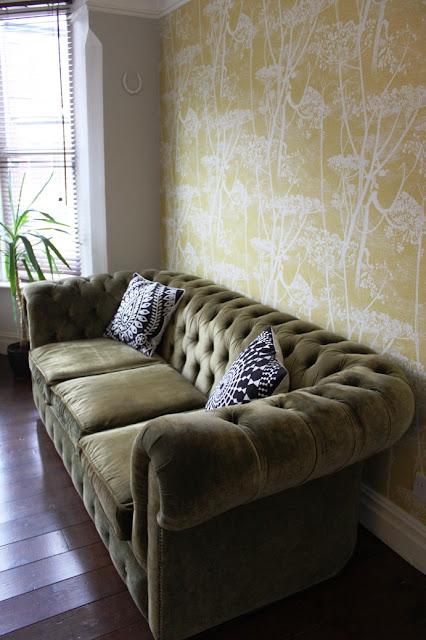 Oh, wait, this is about the chest of drawers isn’t it?  Oh yeah.  Here it is again but with the light switched on.  I would love to get a new lamp but I was using what I already had and just purchased a new black lampshade for it.  I’m kind of obsessed with black lampshades at the minute so might share my new obsession in a future post. 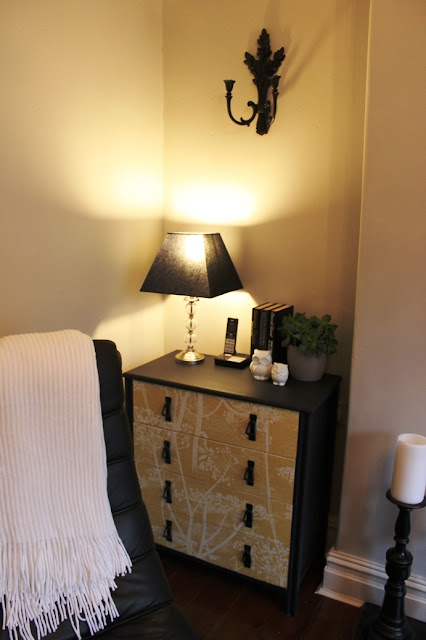 The only problem with the drawers is that I realised once I started that the paint is completely matt which looks fantastic but probably won’t be very durable.  So I may need to give it a coat of clear varnish if I want to keep the top looking scratch free.  I don’t expect this piece will get a lot of abuse being that it just holds our DVDs but if you were to do this in a bedroom, for instance, where the drawers would be open and shut on a daily basis, I would recommend putting a coat of Mod Podge over the wallpaper fronts as well.  I may still do this myself.

The whole project only took me a few hours over the course of a weekend.  It was the first time I tried wallpapering furniture but I might have to find something else to wallpaper as it was so easy to get an instant result. Have you ever used wallpaper to transform a piece of furniture?  Or maybe you started a project without your other half’s consent?  Perhaps you went a bit mad using Photoshop on one of your posts? Go on, do share in the comments! 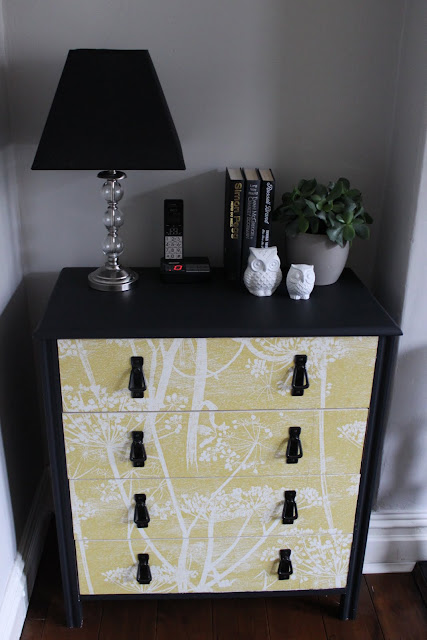