I’ve made a few little tweaks to the kitchen recently because I’m learning a few things about open shelving and I wanted to share them with you.

And very simply, here’s what it boils down to.  You can have the most gorgeous kitchen in the world but if it’s filled to the eyeballs with stuff that doesn’t look pleasing to the eye, than at best, it’s going to be distracting from a lovely space and at worst, no one will notice the gorgeous kitchen because they’ll be so fixated on all the visual clutter.

Have a look at these two images that very easily prove this point.

In the first one, notice that despite the fact that there are lots of items on the open shelves, it’s a carefully curated collection of soft pale shades and the counter tops are virtually clear of clutter (oooh lots of ‘c’ alliteration in that sentence).  It looks tidy, well kept and frankly, gorgeous.

Now, have a look at this image.  Yes, yes I know.  Now, if you look closely, you’ll see there is so much going for this kitchen.  Great counter space, fantastic open shelving and gorgeous subway tiles.  Mmhmm, do you see it now?  Shame of it is that these details are lost because of the sheer clutter.  There’s just entirely too much going on, despite all that amazing storage.

Anyway, my point is that you might as well make the most of what you have and display it in the best possible way you know how.  After all, it was William Morris who said so wisely, “Have nothing in your house that you do not know to be useful, or believe to be beautiful”.  As far as I’m concerned, leave the beautiful things out for all to see and the useful things inside the cupboards!

As a total random side note, I saw a blog image today (I’m not going to say which one or who it was) of a person’s kitchen where the cat bed was on the kitchen counter top (along with the slumbering kitty).  Now, I do love my cats but I just couldn’t IMAGINE allowing my cats on the counter tops, never mind sleeping there (the rule is, no feet where we eat).  I suppose each to their own and everything but wow, do you know how much cats shed?  And I won’t even mention the fact they have to actually CLIMB INTO their toilet and bury their ‘doings’ with their feet.  Shudder.  But I digress.

When we moved into this house, the shelving racks and hanging bars were already there so I happily hung some of my mugs and utensils on them and spread out the rest of my bits and pieces around the counter tops.  As you do.

When we started the renovation, however, we removed the shelves and the utensil hangers and stuffed them down in the cellar where we have started a nice little collection of “Stuff we’re not sure we’ll need so we’ll just hang on to it for the time being until we get so frustrated, we’ll chuck it out or donate it”.  Doesn’t everyone have those collections?

Now that we’ve just about finished everything ‘north’ of the counter tops, I realised I still had the utensil hanger in the cellar so decided instead of buying another one (Ikea has them for around £8), I might as well see if I could clean the years of grime and paint build up that was on the one we had.  Happily, with a bit of hot, soapy water and mineral spirits, it came out shiny and like new.

So here it is in its new home.  And I really just love how it’s cleared that part of the counter.

I also was able to remove the red utensil holder (which had seen better days to be honest) completely and replace it with a simple white biscuit jar and recently moved my salt and pepper shakers off the counter top and into the shelving unit so slowly, the space is becoming cleaner and our work tops just look so much tidier.  I have to say, I’m loving it. 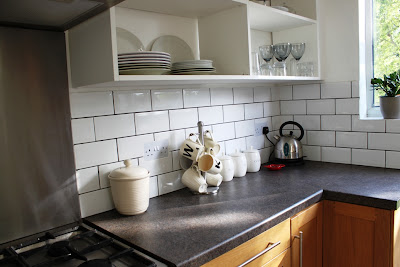 The lesson I’m learning with open shelving here is that you need to keep the visual clutter to a minimum on the counter tops if you want the focus to be what’s on the shelves.  Too much going on everywhere and it’s going to look a bit of a mess.

I’m still moving and changing around in terms of what’s on show on the open shelves and I’ll continue to move things, change things and pair things down as I go.  Because, well, I’m still learning here too.

The things I did end up buying at Ikea (as I saved me a whole £8 by not re-buying something I already had) were these lovely white serving dishes which added a nice interesting shape to an upper shelf. 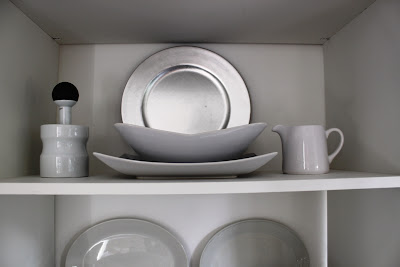 I also picked up two succulents which I potted in my found greige plant pots.  I really love their sculptural look and the pop of green they add – a bit of ‘bringing the outdoors in’ as they always say in design shows. 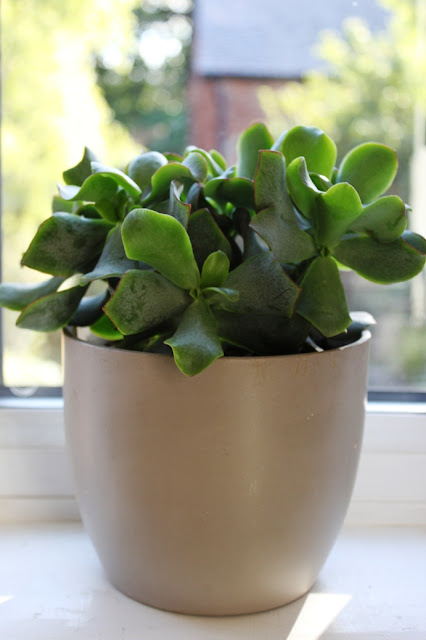 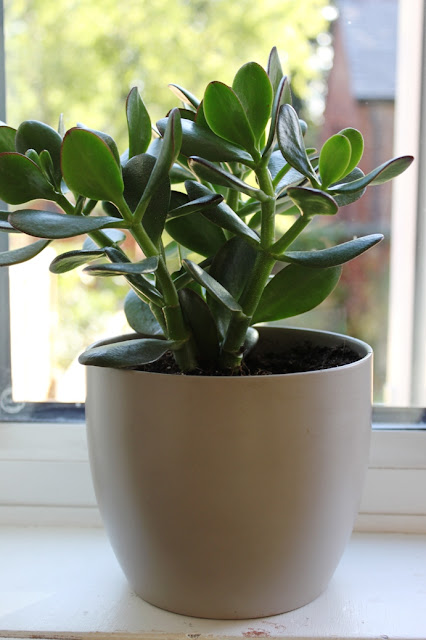 But again, the shapes and colours are simple and uncluttered. 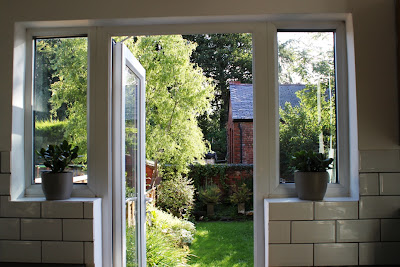 So how do you style your open shelves?  Do you like having everything out and within reach?  Are you a secret maximalist like myself and have to work at paring down what you have on show?  Or do you like a simple paired down minimalist style?  Do share in the comments. 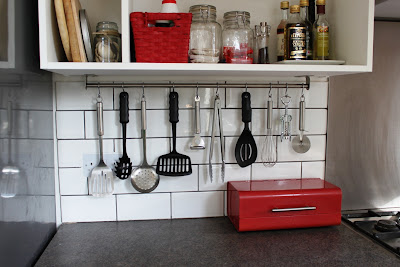