So we had a bit of a ‘knees up’ over the past weekend to celebrate the anniversary of my arrival here from the US to the UK a full 10 years ago.  It was a good excuse for a party, if only for the reason that we’d not really had a big one in our home since we’d moved in and it gave me an excuse to get different groups of friends and family together for drunken mayhem a bit of pleasant conversation and some BBQ food. 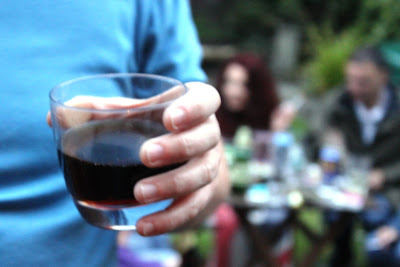 The theme was quite loose with red/white/blue being the colours to match both the US’s Stars and Stripes and the UK’s Union Jack.  I probably should have used England’s St George’s flag if I wanted to be technical but I thought the balance of the colours was better using the Union Jack.  I know, I know, it’s a bit sad but what can I say – that’s just how I roll.

The first thing I have to share with you was my dress.  You may remember my post on Traffic People?  Well, I couldn’t resist the fabulous Union Jack dress in chiffon and silk. 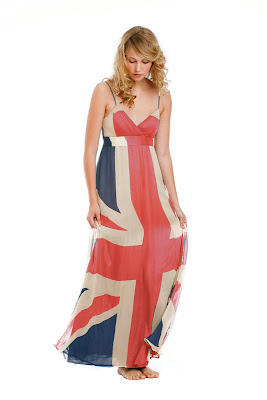 Of course, it was only after I had looked at all the pictures that I realised I didn’t get any where you can actually see me wearing the dress!  But that’s mostly because after I took the initial pictures of the decor and food (whilst simultaneously trying to keep W’s nieces from eating through the sweets table before anyone else got there), I didn’t pull the camera out again until it was well into the evening when most of us were trollied merry and the afternoon crowd had long gone…  so apologies for the lack of pics.  However, I will definitely be rocking the dress again.

I think my biggest fear was that it would look like a July 4th party (America’s Independence Day) but I started to pull ideas from all over the internet that were firstly, achievable and secondly, affordable.  If you’ve been reading me for any length of time, you know I’m a bargain-hunter.  I didn’t want to spend hundreds of pounds buying things that I knew I’d only use once.  Plus, as I’ve said recently and by my obvious slow down of blog posts this summer, work has been mad busy lately, I’ve been travelling quite a bit as well and trying to pull a party together, get the kitchen to an acceptable level of done-ness as well as working and travelling and carrying on a normal relationship with my other half… well, it was probably a bit of a big ask.

So, I enlisted the help of the very lovely and ridiculously talented Rachie from A Chi Chi Affair who made me the most gorgeous moodboards for both the decor and the food…

Here’s the decor board – vintage flags, gingham, coke bottles and teacups with flowers and lots more. 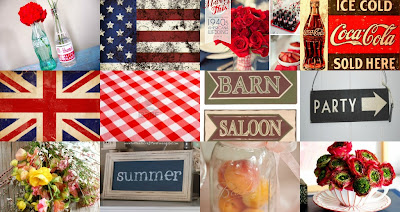 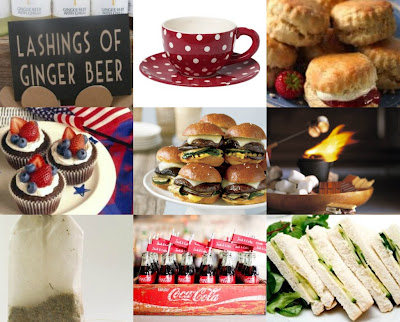 I absolutely loved her ideas.  If you haven’t visited Rachie’s blog, she features lots of great party ideas as well as creating her own and friends’ parties and she is in the midst of planning her own wedding.  She’s never short of a few fabulous ideas and inspirational images!  In fact, she’s featuring these moodboards early next week so pay her a visit and tell her I sent you!

As much as I would have loved to implement every single idea from her boards (I struggled to find inexpensive vintage items), I did pick up on a few items here and there that I knew would create a bit of impact.

The other thing that Rachie helped me with was giving me some focus.  In the run up to the party, I was in a panic, trying to do a million things at once and not really having any clue whether I had enough of a cohesive theme or not enough, what I was lacking, what I already had or where I was going with any of it.

I picked up on a few of the little things on Rachie’s boards and collected other ideas in my Anglo-American Party Ideas Pinterest board.  Concentrating on just a few simple things instead of tackling everything at once, helped me to realise that a few nicely chosen items and a bit of DIY could potentially make a difference.

I’ve decided to show off the pictures along with the inspiration photos here and there so that you can see how I either realised the ideas in their entirety or loosely interpreted them.  You’ll see lots from the moodboards above and from my Pinterest board.

The easiest project was the popular Martha Stewart tissue paper pompoms grouped en mass which I was able to do weeks in advance and they were fun to make.  Everyone was asking me where I got them and it was great being able to tell them them I made them myself and how easy it was! 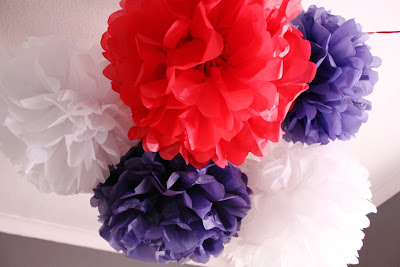 I also sewed metres and metres of bunting using red and blue gingham which came out so well, I’m almost sorry that I have no where it can go permanently!  I used this tutorial I found online and just used a wide red ribbon instead of bias binding because 15 metres of bright red silk ribbon was cheaper than 15 metres of binding. 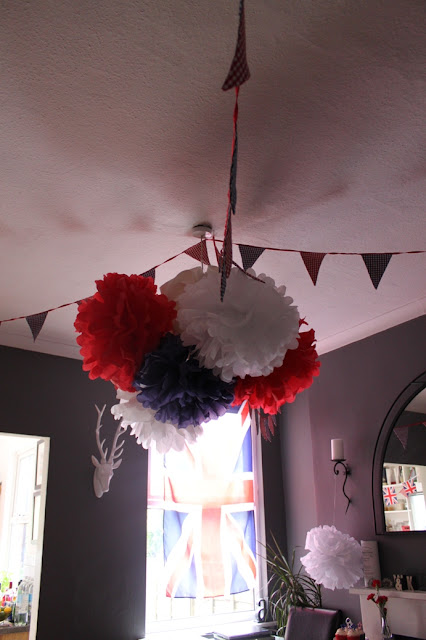 The kitchen wasn’t left out either, with the homemade bunting and union jack bunting crisscrossing the ceiling. 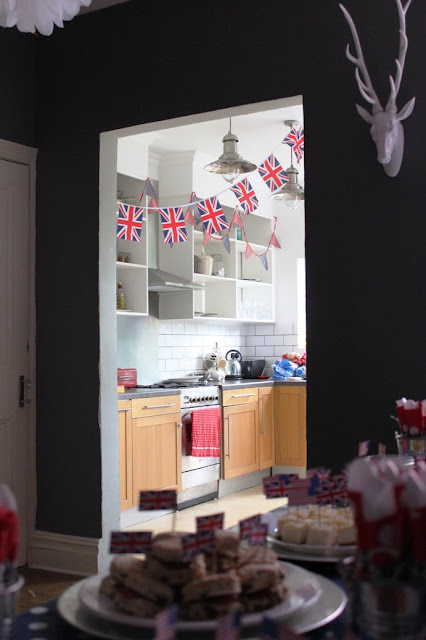 I also loved the polka dots in the cup and so both table cloths were spotty PVC – a must on my dining room table, especially with little ones around. 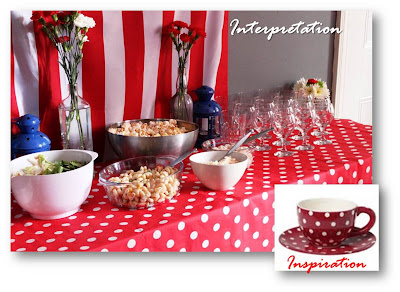 Cupcakes were provided by a talented cupcake-making friend.  I had given her some inspiration pics and she did a sterling job recreating them and giving me three different but cohesive styles.  Aren’t they gorgeous?  Let me assure you they tasted even better than they looked. 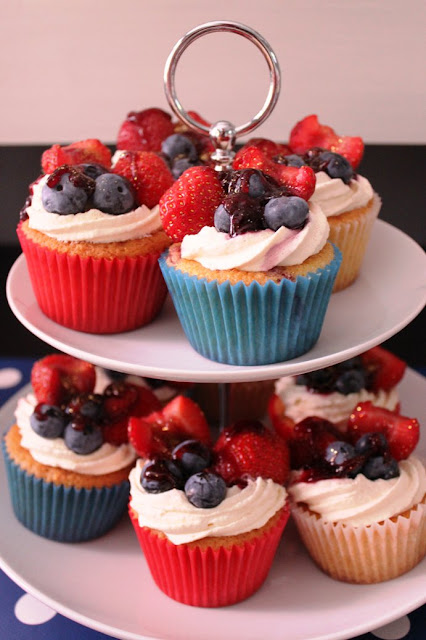 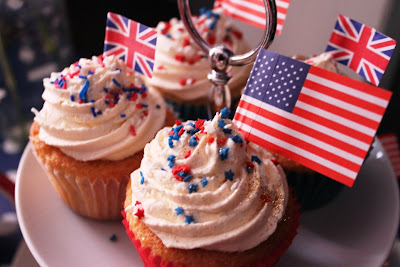 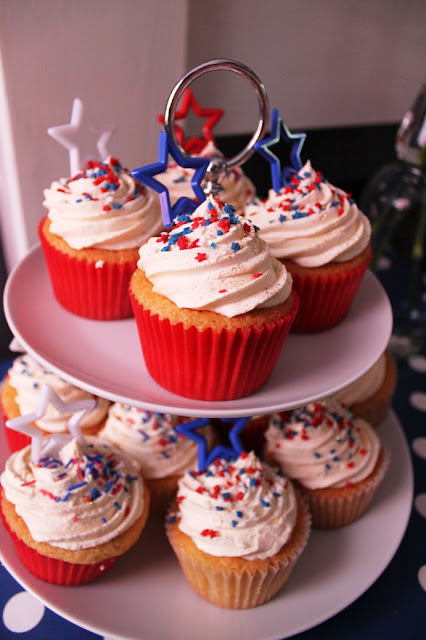 I also found a pic of white chocolate covered strawberries on Pinterest which went down a treat with the kids and I used edible glitter to make them even sparklier!  Oooh I do like me a bit of sparkle… 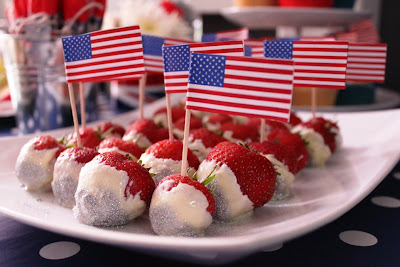 A simple American flag hung behind my second table (in front of my calalily print) which held plates, napkins, glasses and some of the salads. 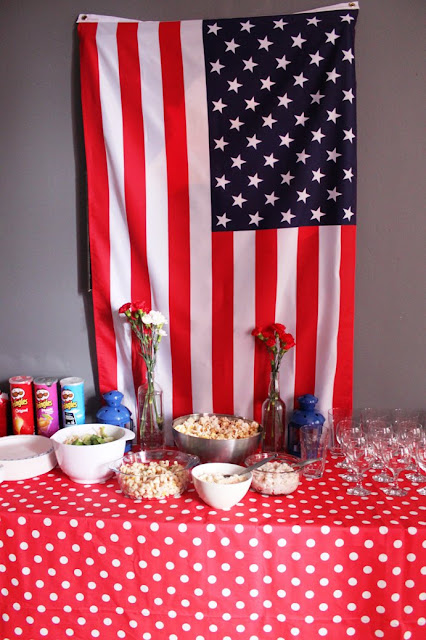 Of course, I couldn’t have a great big American flag hanging without having a Union Jack hanging as well. 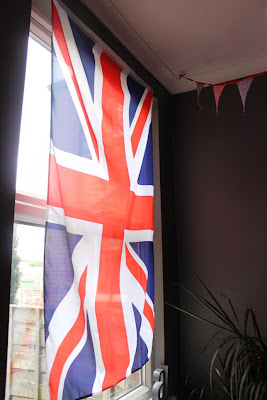 I got a bunch of inexpensive white, red and green flowers (chrysanthemums and mini carnations) just to give the tables a little bit more colour and dotted them around in various containers… From bottles to Union Jack mugs. 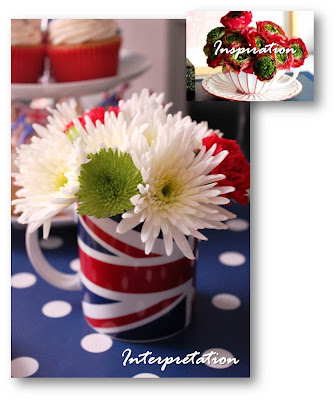 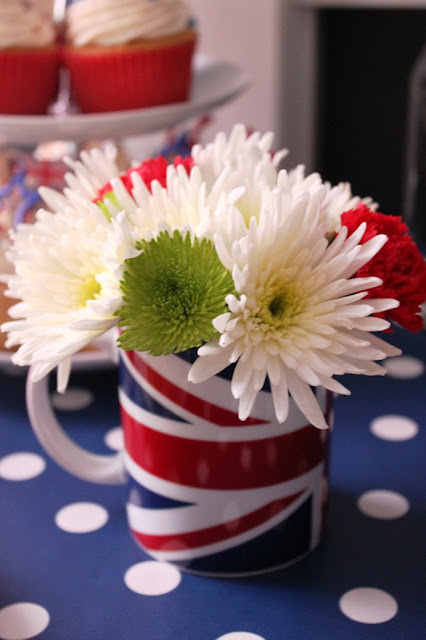 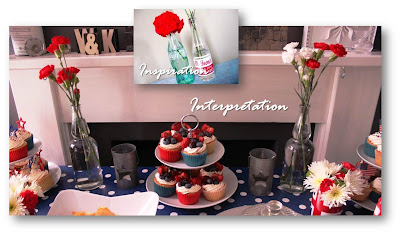 Cheap cutlery was disguised by being wrapped with pretty spotty napkins and then tied with a bit of leftover blue gingham fabric and some twine.  Set in little scattered galvanised pots on the table gave it a more summery feel. 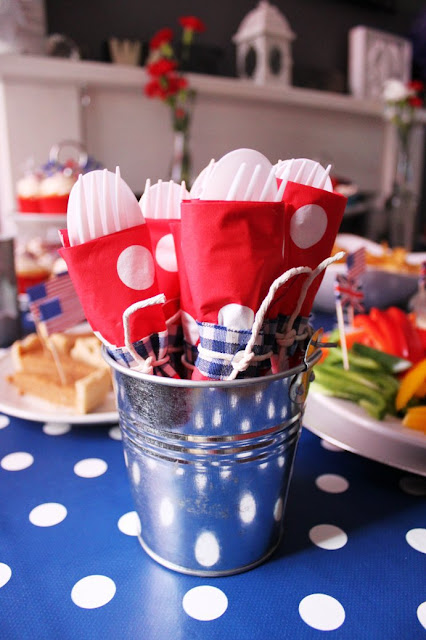 I also served scones thanks to Rachie’s suggestion – decidedly English, no? – with fresh cream and jam… 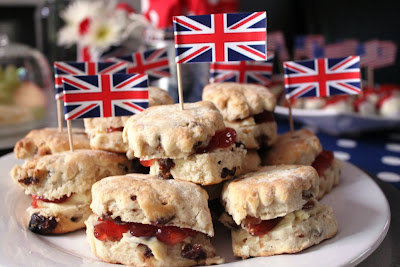 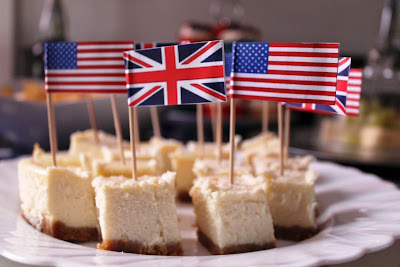 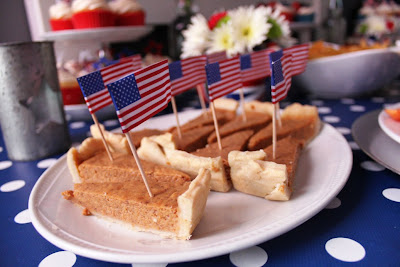 All the little flags were created using Photoshop and then cutout and glued around a toothpick.  Cheap and cheerful (just like me)!  Of course, we also had homemade burgers, hotdogs, sausages and chicken but I didn’t get pictures of those things so you’ll have to take my word for it.  I only took pictures of the food that matched ;)

So that, my friends, is how my Anglo-American Extravagansa/Extravaganza worked out.  Never having tried to create a party atmosphere like I’d seen on other blogs, I’ll just ask you go easy on my rather amateur attempt!

To be fair, it was the lovely friends and family that made the party a success in the end and not the decor but I do think it added to the atmosphere and it was certainly a fun and different challenge for me, especially considering my rather tiny budget.  But the appreciative feedback I received makes me think I’d like to do it again sometime.  Not this year, mind you, but sometime in the future.

Have you had a ‘themed’ party lately or have you come across any that you thought you could recreate?  Do tell (and link) in the comments, I’d love to see what you’re loving at the moment!  And don’t forget to stop by Rachie’s blog as well for loads of inspiration! 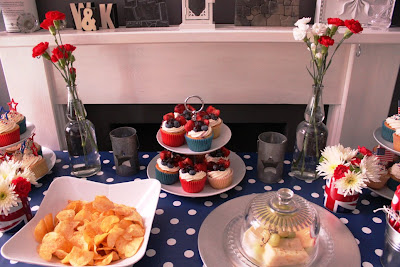 Rachie’s write up is here!