Ok, so I was never going to actually buy the £408 lamps from Anthropologie, let’s not be silly here.

But I did see them on the website and clicked the image because I wanted to see how much they were.

When I saw the price, I pretty much had a small panic attack and quickly closed the page before my heart stopped beating in my chest permanently.

I tried to forget about them (they’d have been too big for the room anyway, I consoled myself) but I did quite like the colour, the glass and the lovely fat bulbous design of the base and so it was saved into my ‘see if you can find a MUCH cheaper version’ folder in my head.  That particular folder is bulging at the seams at the moment but every once in a while I find something that fits.

And that something was two of these little beauties. 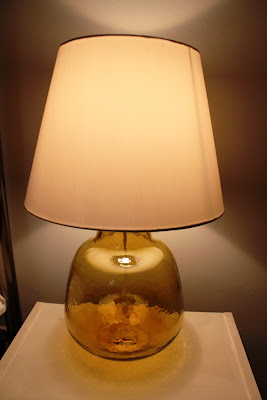 Ok, now I realise it’s not EXACTLY the same as it’s a bit smaller (which suits the space better) and it doesn’t go in quite so thin at the top but at £13 per lamp at TK Maxx*, one doesn’t complain about these things.

I’ve been meaning to replace the lamps on either side of the bed for a while and when I was taking these pictures I realised I’ve never actually shown the bedroom before.  There are definite reasons for this.

The biggest reason is because we’ve done so very little in the room.  Here’s a before from when we moved in. 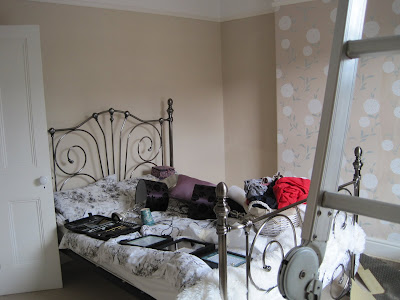 The pinky-brown colour was re-painted pale grey (in fact, we just used the leftover paint from the living room) and the chimney breast was stripped of the wallpaper.  All this was done within the first few weeks of moving in as a stop gap.

Here’s what it looks like with the new lamps in place.

We’re looking at replacing ALL of the furniture in the room.  This includes the bed – we’re going to be upsizing to a King size bed because we really need more space (a tufted headboard is featuring quite heavily in my dreams).  The wardrobes (not shown) are pretty awful as they are just cheap this-will-do-for-now items that W & I had in our own places and we just stuck them both in the same room and painted them the same colour for some consistency.   The bedside tables need to go as well.  I bought them for £10 each from ASDA, painted them white and replaced the handles about 6 or 7 years ago.  I had never intended to keep them this long and yet, I still have them.  How does that happen?

We also want to add some seating, likely in the form of a small antique sofa or a chaise lounge.  We also need to get new curtains for the two windows on the opposite wall.  The current ones don’t even match each other and don’t hit the floor which is why they aren’t shown either!  The likelihood is that all these purchases won’t happen until we’ve got the spare cash so it’ll probably be a while before we can really tackle this room.

So that’s why you are only seeing the bed bit and the rest of the room will have to be saved for another day! 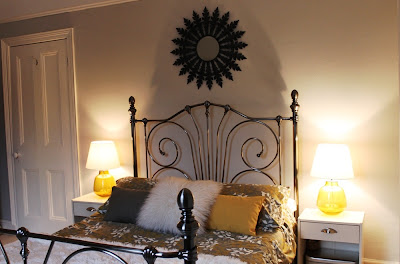 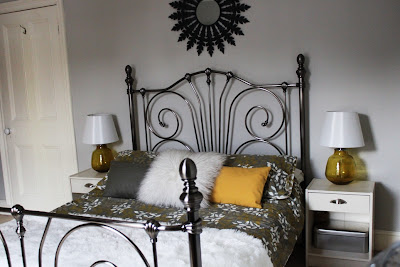 Clap On! Clap Off! The clapper!

Oh are you guys too young to remember that advert?  Well, let me enlighten you.
(Geddit?? EnLIGHTen? Oh I kill me.)

Ok, I don’t really have a Clapper, I just thought it was funny.

So anyway, yeah there’s the bedroom with the new table lamps.  I think the size is quite good for the room although the shade is a bit too plain.  Me thinks some zhushing may be in order.

The duvet cover was purchased about 8 weeks’ ago from B&Q for £22 for the set.  It’s cheap but I liked the colours.  I don’t want to purchase any expensive bedding until we get the new bed so this’ll do for now.  The small cushions were sewed by me to match the bedding (probably cost about a fiver) and the white fur throw and pillow I’ve had for years. 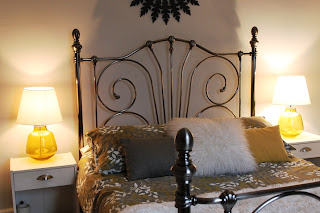 Here’s a closeup of the metal Fleur de Lys mirror over the bed.  I got it from Really Linda Barker a good few months ago in one of their sales for £18.95 so another bargain item. 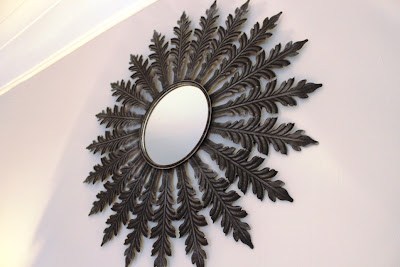 Pablo as per usual sees the camera and immediately thinks he needs to be in the pictures. 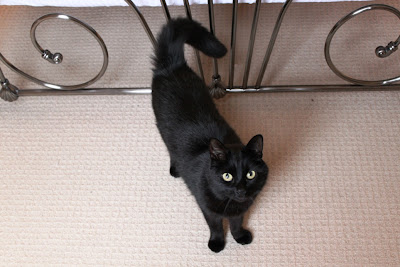 Until he realises, ‘Hey, wait a minute. What we doing in the bedroom?  It’s time for sleeping, isn’t it?’

About 20 minutes later, Senna  snuck in for a nap herself.  Must be good to be a cat. So have you found any Anthropologie-look-a-like bargains lately?  Making do with lots of cheap bits and pieces until you can buy your dream bedroom items?  Does your dream bed feature tufting as well?  Or maybe it’s a gorgeous four poster?  Or something else?  Any ideas of pretty things that can go on the bedside tables that won’t be knocked down by the cats?  Do tell….

All images my own.