Sideboard Aboard: Declutter in the Dining Room

You may remember from this post that I scored this sexy number from eBay for a mere £50 on Christmas Day.  What? You don’t surf eBay on Christmas Day?  Just me then? Ok, that’s not entirely true, it just happened to be the date the auction ended and so I’d kept one eye on the auction and one eye on the turkey just in case I was outbid in the last moments.  Happily, I wasn’t.  Oh yeah baby, Happy Christmas to me. 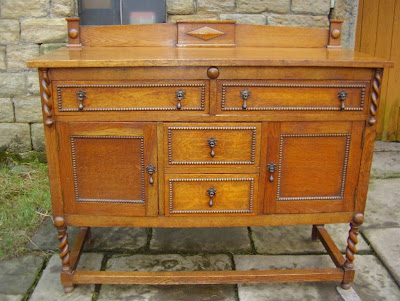 Anyway, because we won it during the holidays, we hired a van to pick it up on Monday, 3rd January because we were both off from work.  W booked it online with no issues (lots of van rental companies weren’t open on the Bank Holiday as you can imagine) and I spoke to the kind Yorkshire gentlemen who had listed the sideboard to make arrangements for pick up.  Well, imagine my disappointment when the van rental company called us later in the week to advise us they had taken the booking in error and that they had to cancel unless we wanted to rent the van for 3 days.  Ummm, at £70/day, I don’t think so.  Booooo.

So we started asking around and W’s ever-so-helpful brother in law said he’d be able to borrow his father’s estate vehicle but because of his work schedule, it would be a couple weeks til he had a free day to help us out.  Bless him, the kindly Yorkshire gent allowed us to postpone our pick up for 3 WEEKS after we’d won the auction.  Well, today was finally the day we got to pick it up!

I have to say, despite there being so much left to do, the dining room is finally starting to look like a real room.  Just as a gentle reminder this is what it looked like the morning after we moved in: 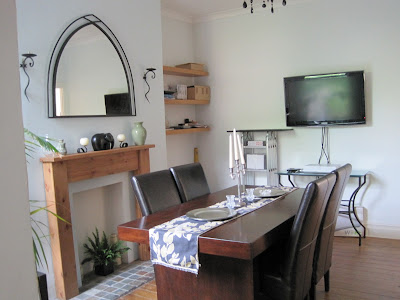 We finished the doors and added new hardware… 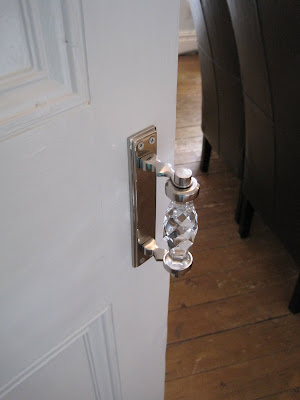 We decided to go with a deep dark grey on the walls and I painted the mantle white.  I then proceeded to arrange and rearrange said mantle ad naseum… 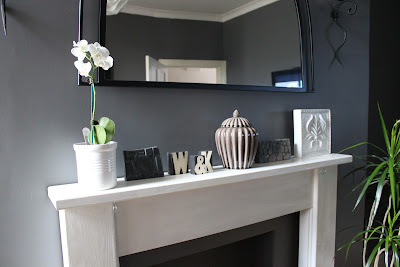 But what you haven’t seen is how bad the wall to the right of the fireplace actually looked.  I’ve spoken before of our reasoning for having a large LCD television in the dining room and my plans for creating a gallery wall.  However, prior to bringing home the sideboard, we had the most inappropriate glass console table we were using to house the stereo, the remote controls, two games consoles and countless other paraphenalia including an absolute MESS of leads.

Those with a delicate disposition may want to look away now. 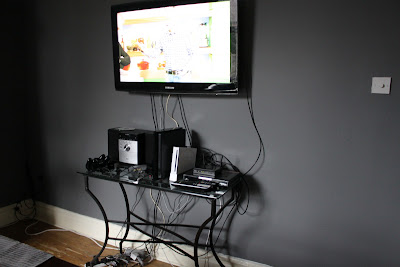 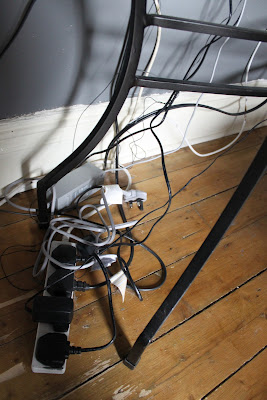 Now you know why I was so desperate to get a sideboard to house all this stuff!  Happily, it now does!

So here’s my  new baby in place.

As lovely as it is in it’s current state, I’m very much leaning towards painting it white.  I won’t be able to wait too long on that one because it’ll drive me mad so yeah soon, people, soon… Oh and the top will get ‘prettified’ in time too so I’ve just put a few vases there in the meantime. 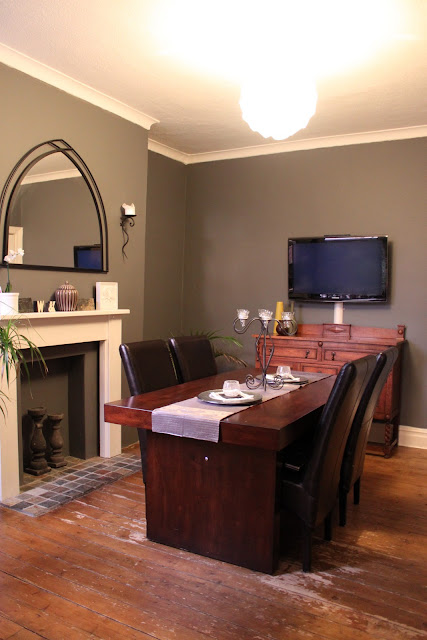 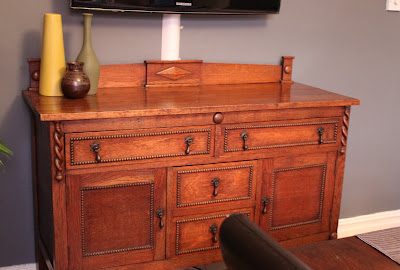 You may have noticed that rather fetching white ‘tube’ that runs between the middle of the television and the sideboard.  We initially thought about creating a ‘gutter’ in the wall and concealing the leads inside but with a 100+ year old house, the walls are more brittle than you would think so chipping away at it wasn’t going to be the best option.  So basically we have used something like this which can be painted to match the wall colour.  Let’s hope once it’s painted it does indeed blend in and become less of an eyesore. 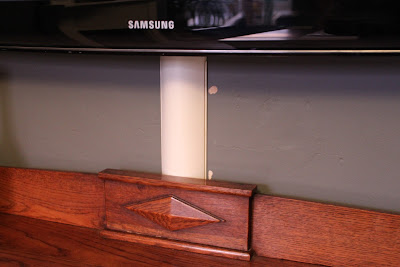 One other thing we did with the sideboard once we put all the games consoles and various other bits and pieces in it was to allow the items to have some air circulation around them.  So we cut this hole into the back which could easily be patched with another piece of wood should we ever decide to sell it.  To be fair, you can’t even see the hole once it’s against the wall so I’m not that fussed about using the furniture in a way that works for our needs.  So, when the PS3 is in use, let’s say, we’ll also open the door a bit to allow for it to ‘breathe’.  Then, when it’s not, the door gets closed and it’s back to being hidden.  Most of the items are controlled via bluetooth so there’s no reason for them to be visible.  Happy Days. 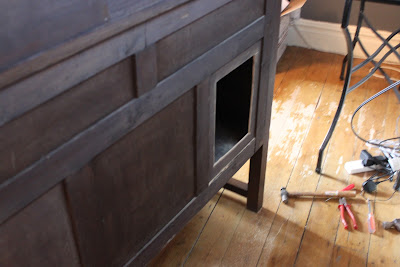 So what about the little glass console table?  Well it’s been repurposed at the moment as a sort of drinks station until I get my proper one.  What do you think?  (I know the bottles are mostly empty, what can I say, we like a drink…) 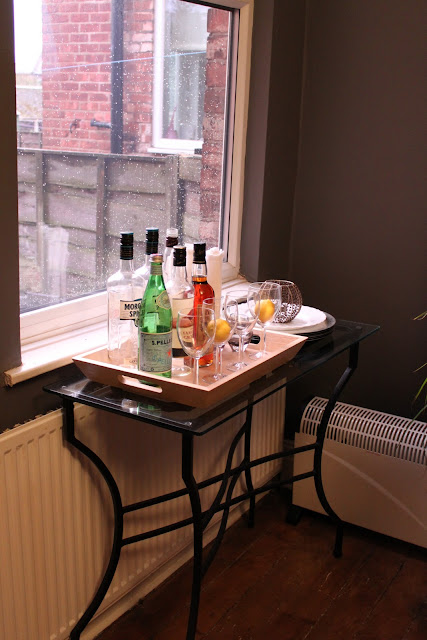 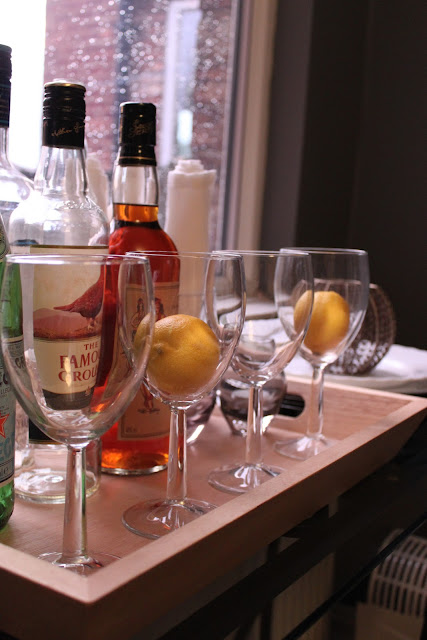 I’m definitely going to paint that tray but as I did this all on the spot today, I didn’t have time to do that just yet. Another project for another day coming up soon!

I also would love to add a cover for the console table to hide the ugly radiator like so: 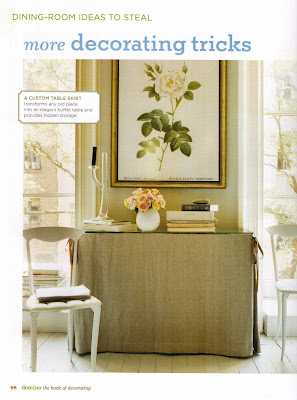 The other thing about the dining room you couldn’t really miss may have noticed is the very very poor state of the wood floors.  Yeah, we know.  If you recall, our living room flooring was actually in a worse state initially and the plan is to eventually redo all the wood flooring in the downstairs (the upstairs is fully carpeted).  However, it’s a pretty big job with a lot of disruption so we are going to have to hold out on that job for just a bit.

But don’t you worry, there’s another very big project in the works so no slacking here at Swoon Worthy!  Oh no, I wouldn’t do that to you guys.  Want a hint?  It’s in the picture below…

I suppose for a room we really didn’t set much money aside for and truthfully have spent next to nothing on (we’re talking less than £150 here), we haven’t done too badly in getting this room – at the very least – presentable.

As you can see, the list is still fairly substantial (and I haven’t talked about the roman blind I want to make, the slip covers for the chairs and the new runner I intend to sew and the vast number of items I’ll need for the gallery wall) but being able to finally walk into the room and not think of it as a ‘before’ picture isn’t too bad… 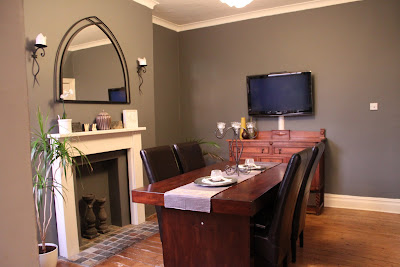