I took the week off  from work after the weekend we moved in. I had visions of a fresh coat of paint, a few flowers and plumping cushions… in reality, it was shifting heavy boxes from one room to another, breaking down said boxes and deep cleaning. The first room I really tackled was the kitchen.

It wasn’t in terrible condition but it wasn’t particularly screaming to be cooked in either. I took a toothbrush with Flash to the knobs on the cooker the very first day because they were coated in about 6 years worth of grease. In doing so, I ended up scraping off most of the numbers showing the temperature on the gauges and the little lines showing how high the gas is but hey it was CLEAN!  And so it went…

Around Wednesday, I finally decided it was time to paint the one room that was totally unpacked. I was initially at a loss of the what colour might work for the space. It was a pale aqua blue on one wall with a slightly paler blue everywhere else and it had obviously been painted quite some time ago. 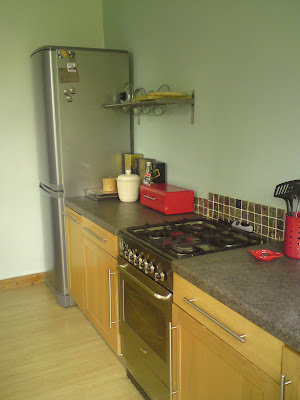 Before… the picture makes the paint colour look a bit green but I assure you it was more aqua blue.

I have an inspiration folder that’s jam packed with gorgeous kitchens and there are definite reoccuring themes in there – white cupboards, butcher block counter tops, lots of open storage and glass fronted cupboards, fabulous industrial style lighting and BIG ISLANDS… 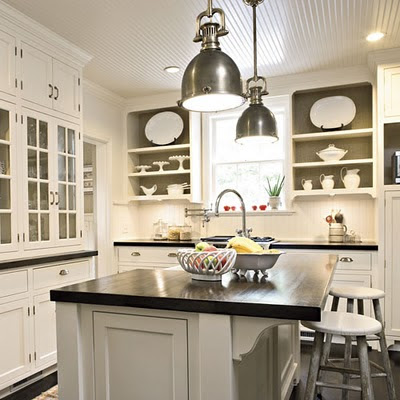 *swoon* I wish I knew where this image is from but not sure. If anyone knows just let me know and I’ll be sure to credit it!

Alas, my neglected little kitchen is sadly none of those things. This is reality folks, and so we’re talking cheap, low-budget options. Namely, paint.

Strangely, inspiration came to me when I was making a cup of tea. I had received a free packet from Royal Mail, believe it or not – my ‘Welcome Pack’ they send for free when you pay for forwarding your post. And in that pack was Clippers Tea. The box sat on my countertop near the red breadbin and I loved the colour combination of the olive green against the red. So a decision was made. Olive green one wall, pale grey on the others, touches of red (which I already had) everywhere else.  Off to Homebase I trotted to pick up my paint.

From the website, the olive green I loved although it’s deeper and richer on the packet.
The tea’s not so bad either.

After I painted and over the course of the rest of the week, I added a few bits and pieces. A red roller blind, some herbs, a few Kilner jars, ‘S’ hooks for the existing shelves. Some homemade art too which I’ll share in a future post. 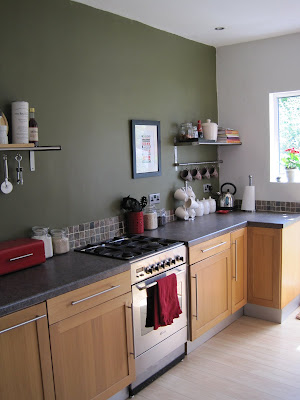 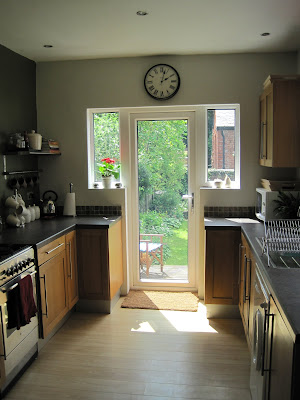 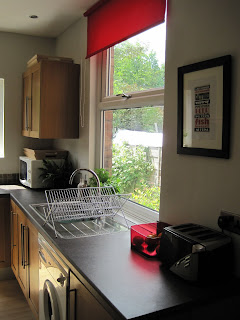 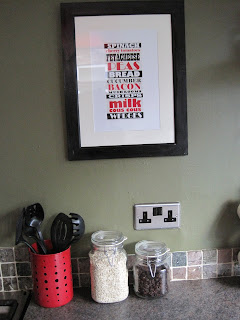 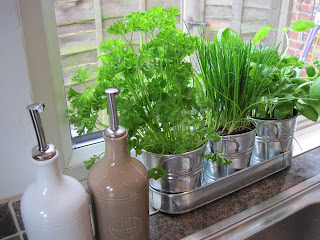 Ok, so it’s not my amazing white kitchen with butcher block counter tops and industrial lighting and in time, there’s loads we’d like to do, including those things… Add to that list swapping out the laminate flooring for tiles, painting the cupboards (white of course), replacing the hardware, adding some additional cupboard space, adding an extractor fan, include more open shelving…. but if there’s one thing I am learning quite quickly, it’s the art of patience.  In the meantime, well, it’s a start. 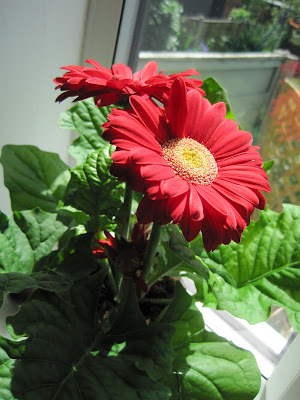