I know, I know, I’m doing a ‘garden reveal’ in September. Just picture the emoji with wide eyes because that’s the look I’d be giving too. The truth is, the garden took way longer to sort out than I actually ever thought it would and that’s 90% because we just didn’t have enough decent weather to really do everything we wanted to do and 10% because on the odd occasion the weather was good, we’d already had plans to do other things – typical of a summer schedule really! So here we are in September and I’m just now sharing what should be a summer post but well, like I always say, this is real life here so sometimes things don’t always go to plan. 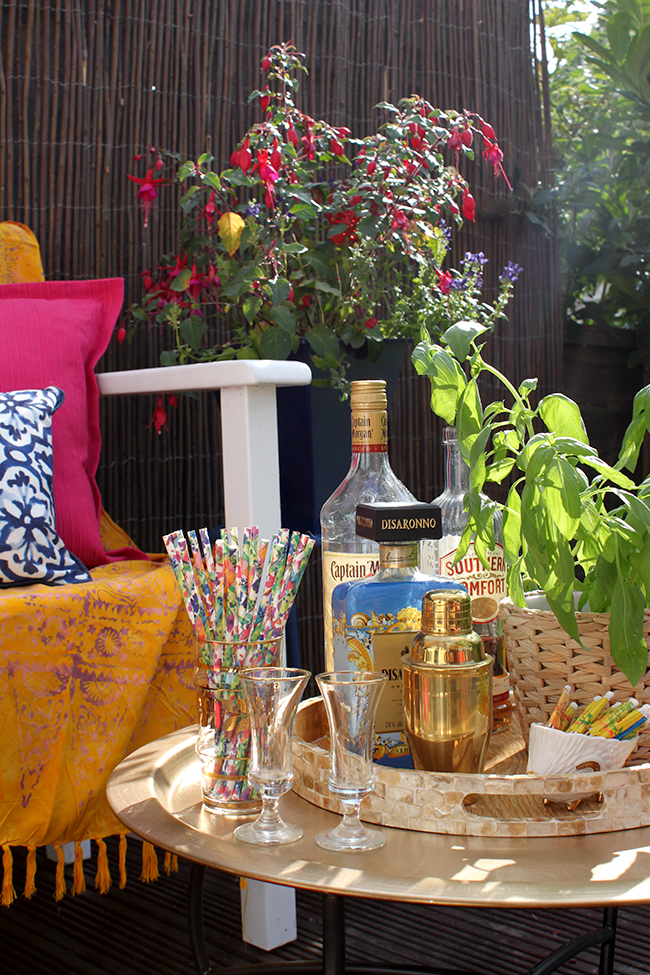 As you probably know by now if you’ve been following along with our (slow) progress, I teamed up with Homebase for this reveal and with their help, we did complete a few projects that were on the priority list which I’m happy about!  There will be a few things, however, that’ll be added to the list for next summer. We thought for sure we’d be able to do the railing, for instance, but as summer wore on and the weather was just rainy, overcast or a little cold, it didn’t seem the best way to spend what’s quite a significant amount of money so that idea was shelved for another time.

However we did get the step done, I finished painting the shed and I solved my problem of the faded deck panels! Hurrah!

So let’s get on with the reveal, shall we? 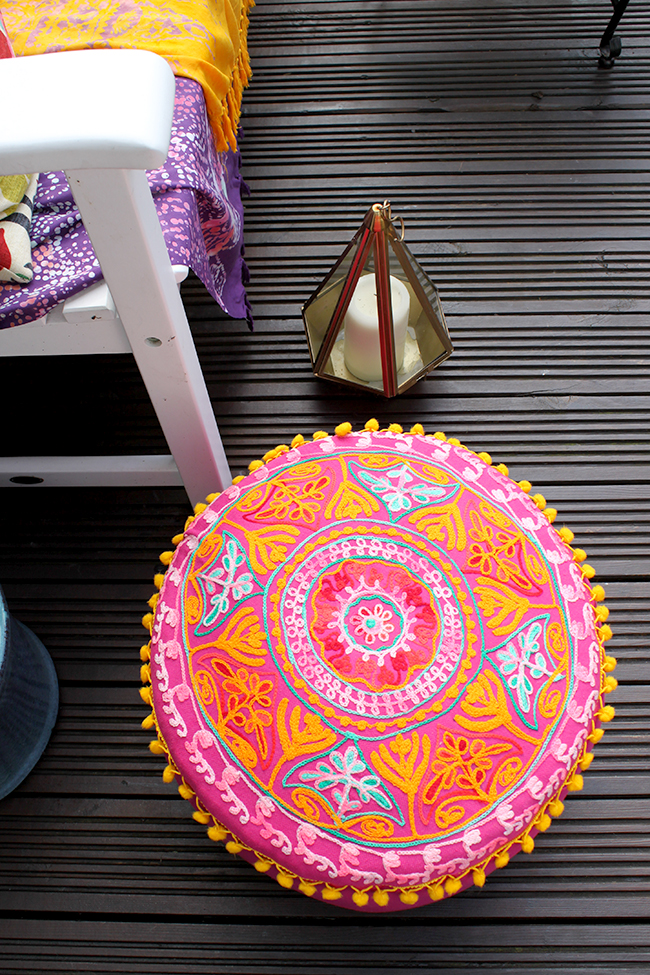 The main reason for the refresh is I wanted to change up the palette out here to a mix of bright boho colours and give the back garden a very boho glam look and I think with the additional textiles out here, I’ve pretty much succeeded in that. Could I have done more? Oh yeah, for sure. But for now, I quite like the look even if I won’t be able to enjoy it for too much longer! Ack! 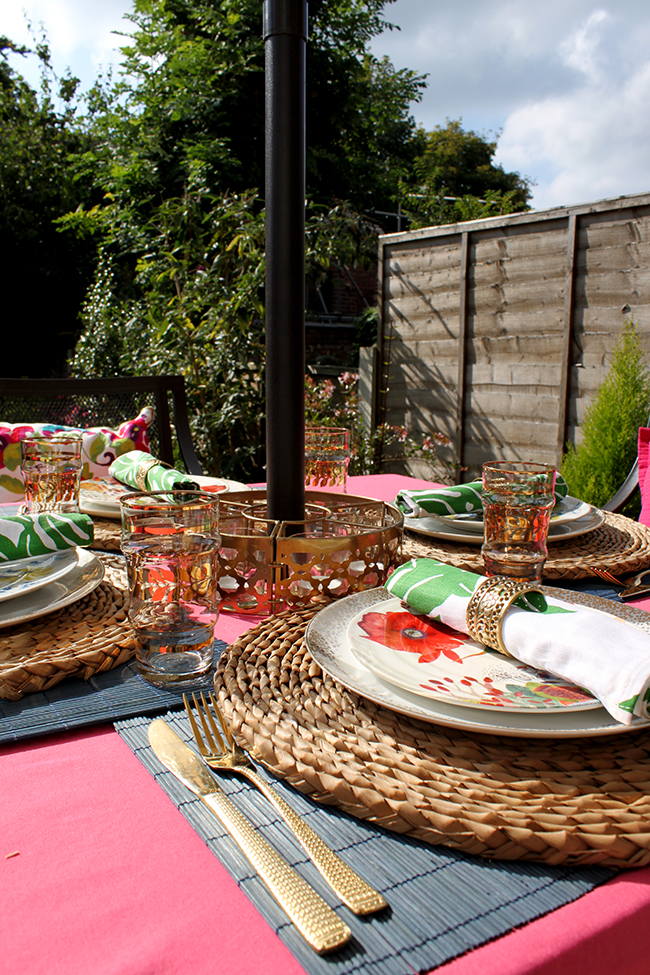 So first off, my favourite part of the decking!

Here’s the before… those deck panels were challenging because we share them with the next door neighbour and everything I read about staining them said because of the way they were placed (notice the slats are facing upwards), there would be drips on the other side. This would mean that if we stained them, there was a very good likelihood the stain would show through on the other side. I don’t really want to piss off my neighbours so I had to come up with a different solution. 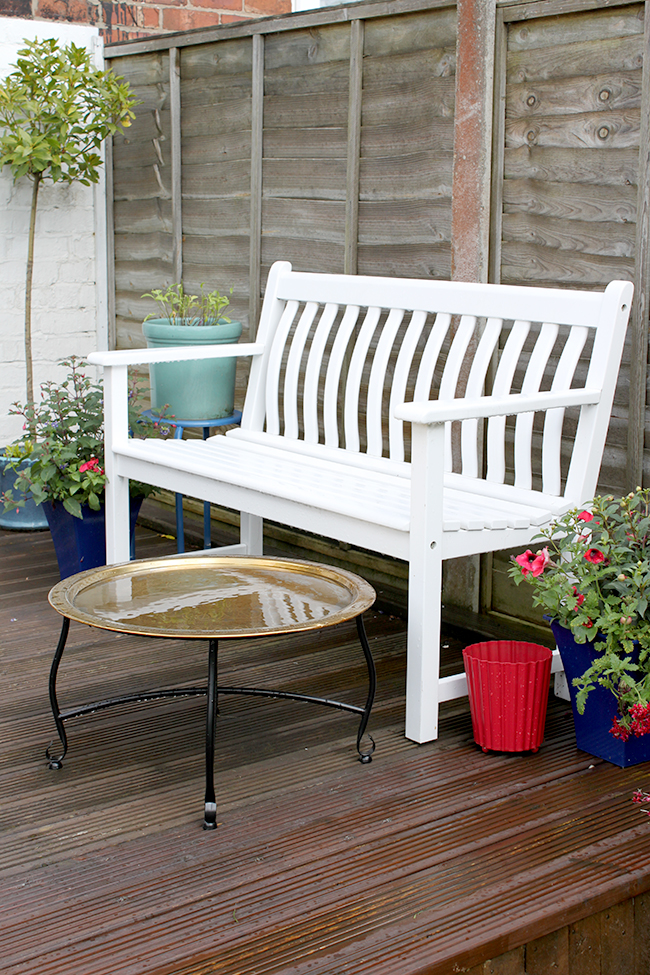 Here’s the after… I covered the faded, tired looking deck panels on this side with Willow Slat screening in a dark colour. It was the perfect colour to marry up with the dark stain on the decking and I adore the texture it brings to this side. It was so easy to install and I love how the dark backdrop works so well against all the colour. 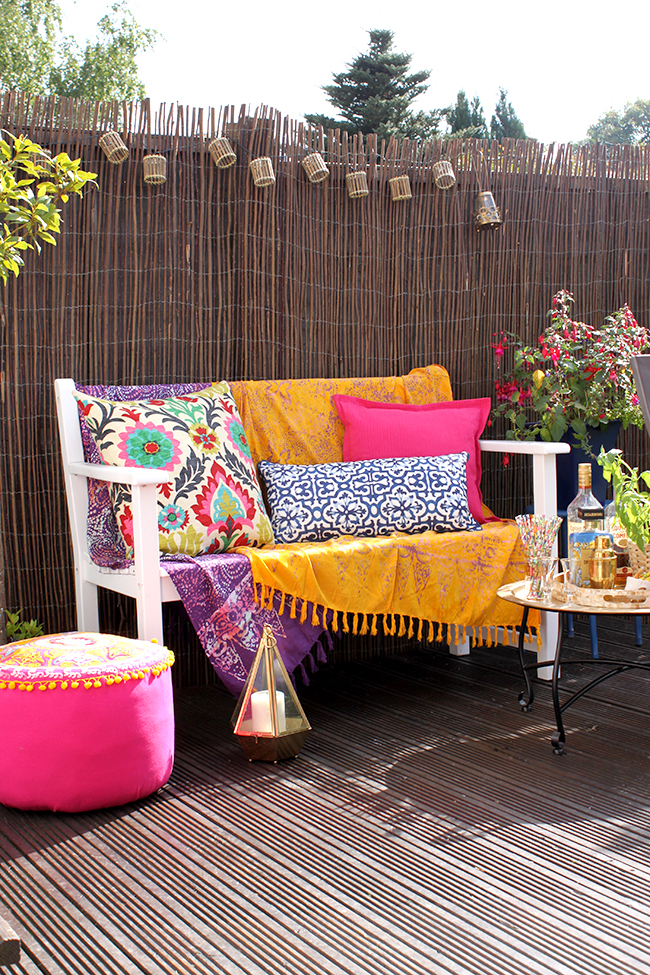 I strung my little bamboo solar lights from Homebase along the top and a couple of hanging garden lights from Sainsbury’s which cast a lovely glow at night. I added a few plants (I didn’t go crazy plant-buying simply because it was the end of the season and spending money on plants that would likely not make it through the winter seemed a waste of money so I made do with what I had) and then layered a few light weight throws I’d bought in Menorca and a few cushions for colour. 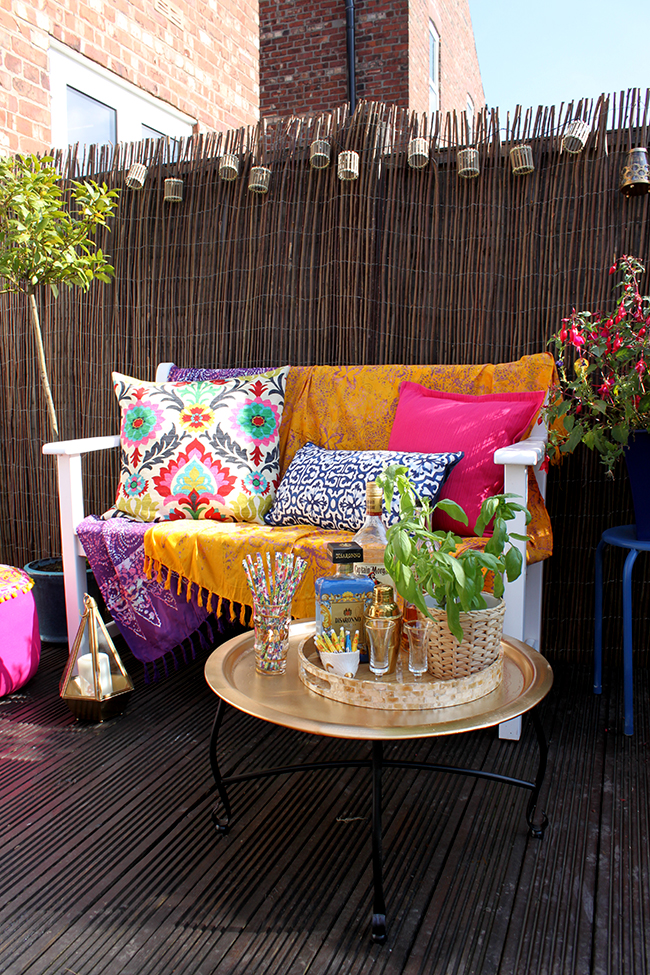 The little Moroccan table and gold terrarium were purchased at Sainsbury’s so I styled it as a little drinks area – because nothing says party like a basil plant. Ahem. The tray is from HomeSense. The cushions left to right are from Stuck on Hue, Joss & Main and Dunelm Mill. 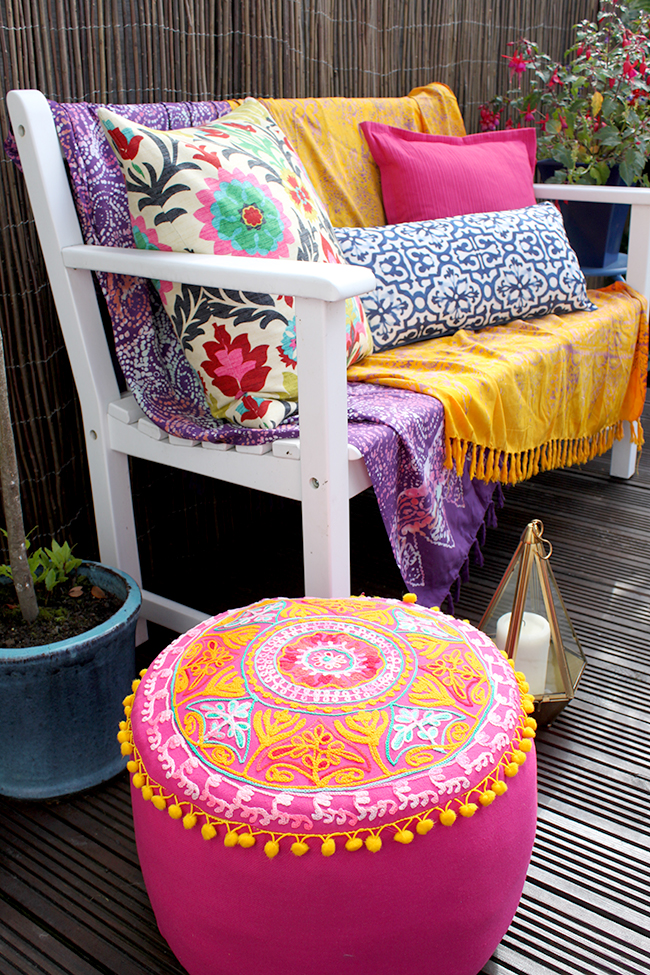 That cute pink Moroccan pouf was purchased at Cult Furniture.

I really love the Rimini table and chairs set from Homebase. It’s small enough that it doesn’t take up a huge amount of room on the small patio but large enough to comfortably sit four people. We’ve used this constantly through the summer. 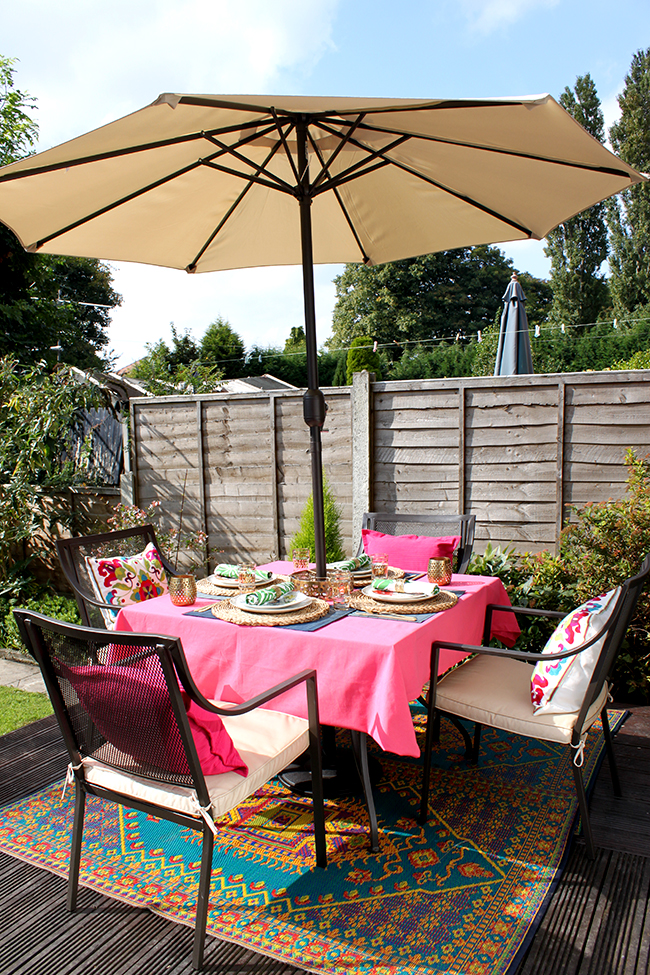 I wanted to keep that ‘boho brights’ theme running so I used a pink tablecloth I’ve had forever from H&M (which I cut a small hole in to accommodate the umbrella!), the cushions are from Dunelm Mill and the round tea light holder and gold votives are from Sainsbury’s. Everything else I already had.

As I said previously, Wayne built a proper step as well out here. Here’s what we’d had previously…. 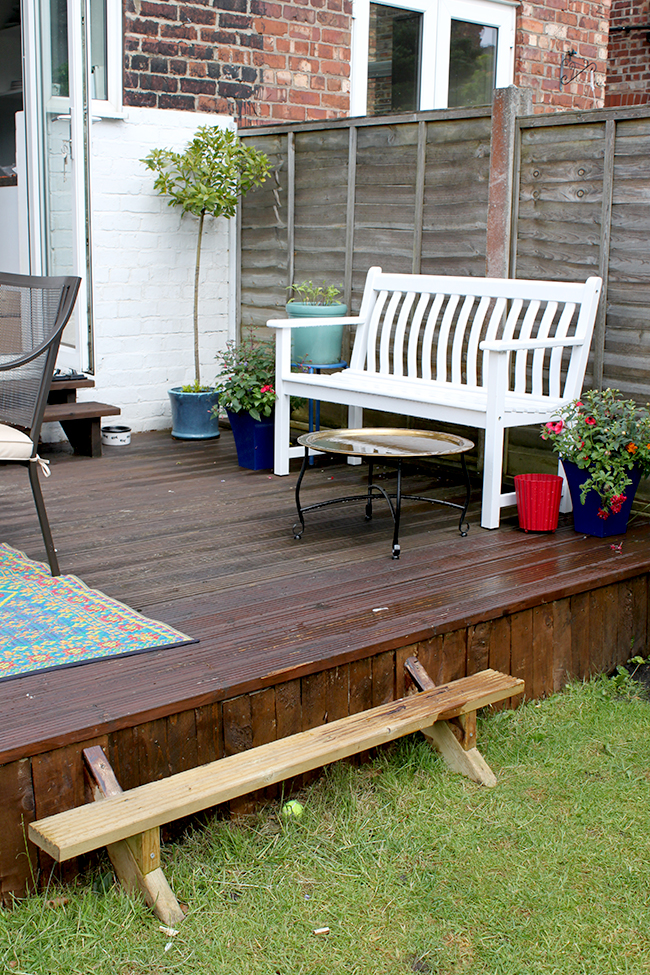 And this is what it looks like now. Much better. 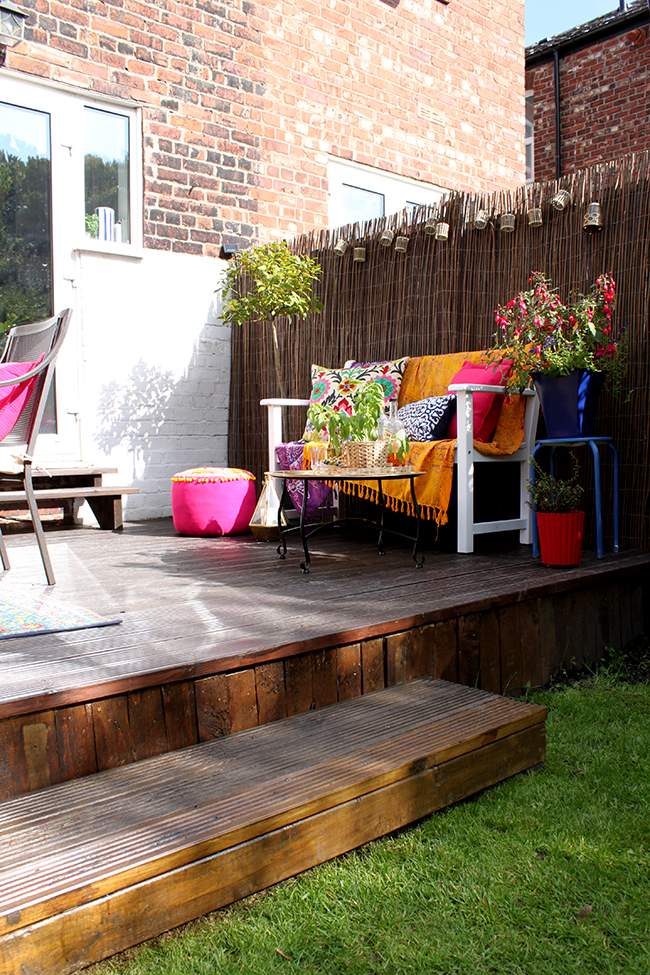 I’d love to add some little tassles to the umbrella at some point – another project for next year! 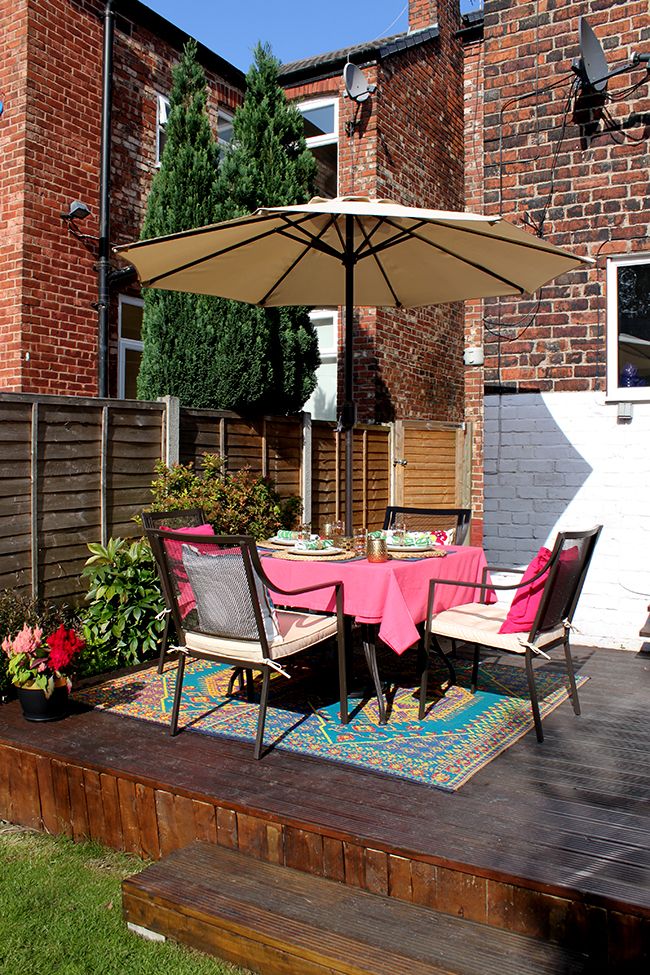 And of course, I’m hoping next year we can get those railings up to really finish it off and get some more plants out on the decking.

For the back patio, I painted our new shed in black and we trimmed out the windows and frame and painted it white. I just wanted something simple back here. Yes, that horrible scaffolding is STILL UP. Gah. 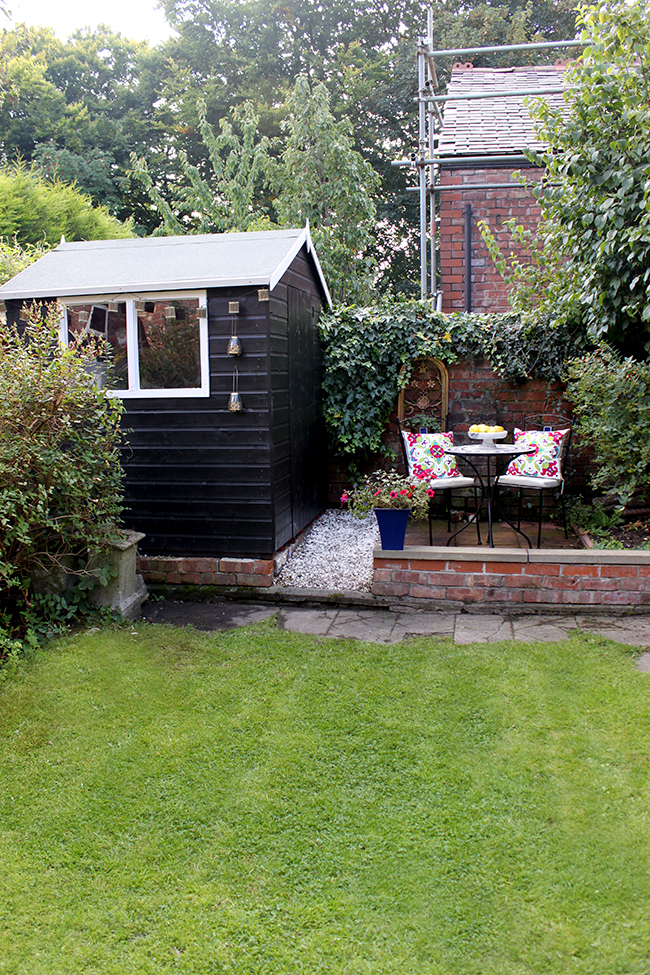 I added another string of bamboo lights to the shed and a couple of hanging tea lights. I think next year I want to replace those hanging tea light holders with a mini vertical herb garden – it’s on the list! 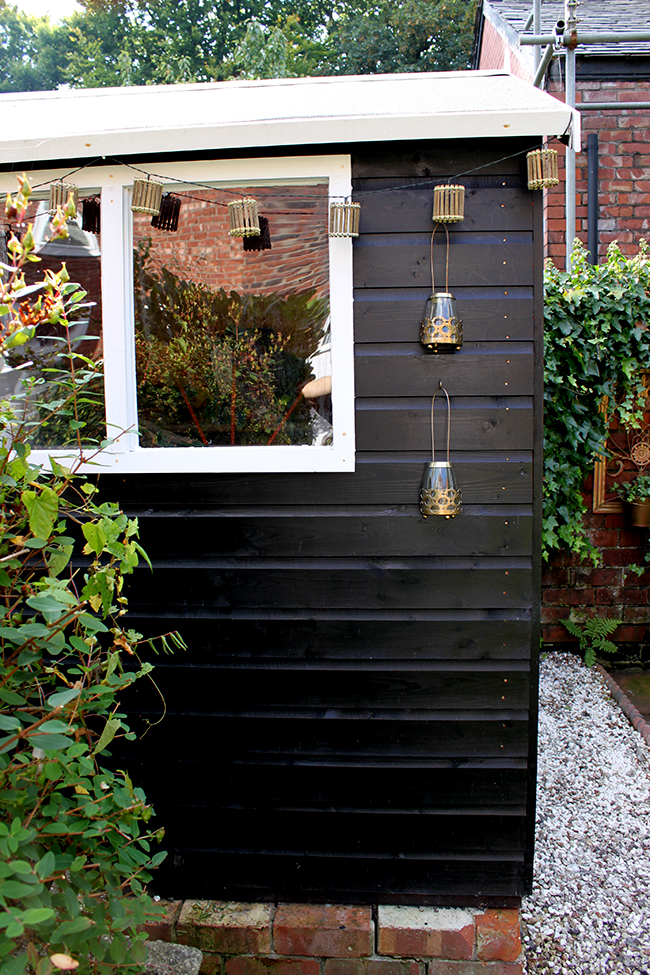 The cushions again are from Dunelm. That beautiful marble cake stand is from Rockett St George. 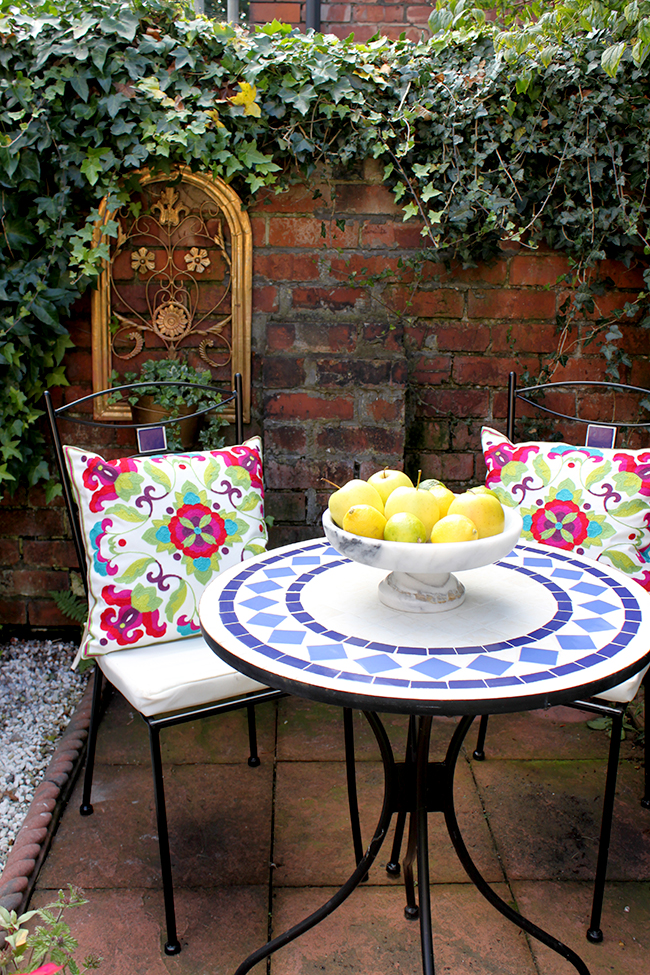 The patio set is the Amalfi Mosaic Bistro Set from Homebase. I love the tiled table top and the colours just work well with that boho vibe I wanted out here. 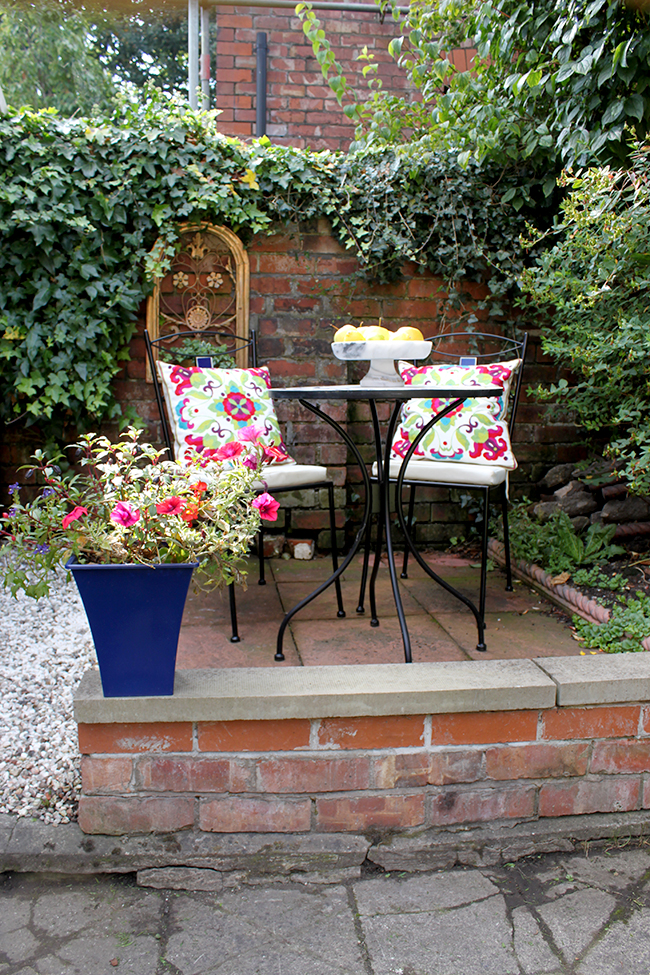 The planter was also from Homebase. It came totally potted up and I’m happy to say the two I purchased for a mere £5 each survived the summer and are doing really well. I love the colour it brings to this area of the garden. 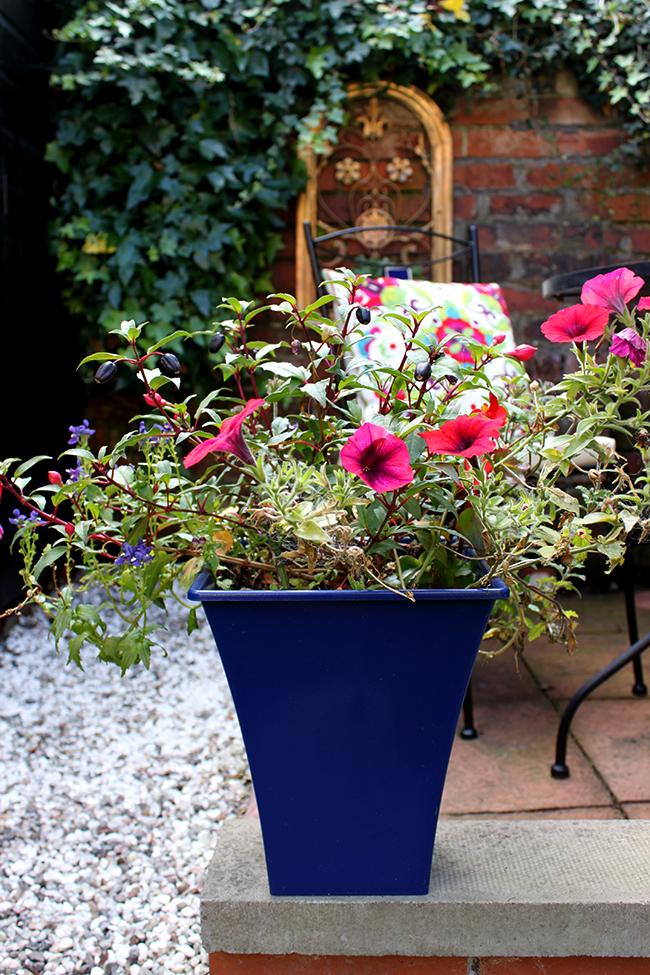 So that’s it really! A chilly, wet summer wasn’t exactly what I’d ordered but on the odd lovely day (like what we had this weekend!), we’ve had a lovely area to hang out in. The two areas I really wanted to get done this year were both the front and back of the house and while the front of the house was totally completed, we still have a little work to do in the back for next summer. 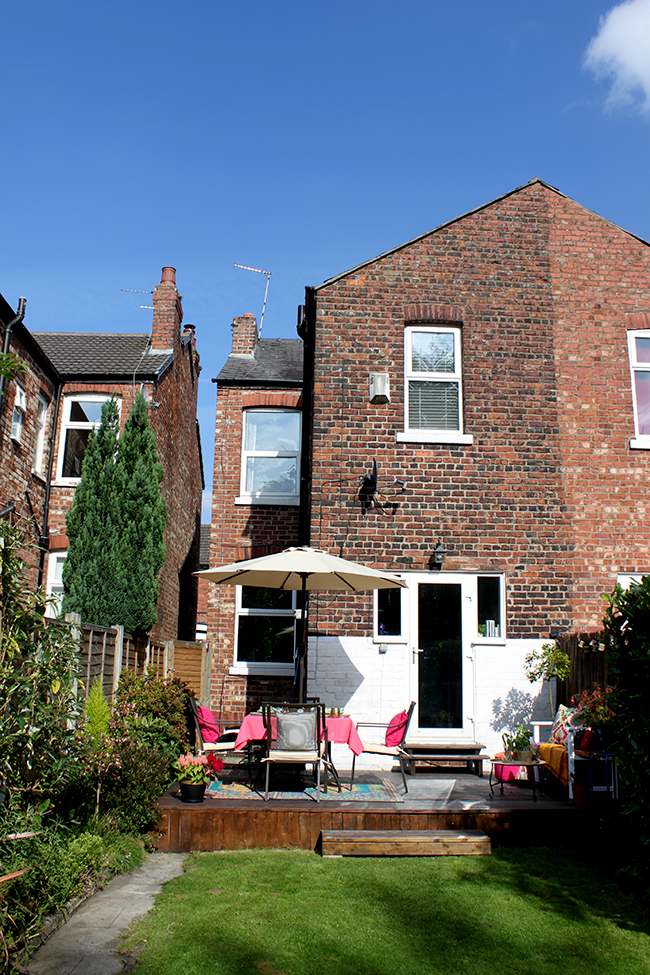 A massive thank you to Homebase for being so patient on this project and for helping us get a number of little projects completed! And thanks to you guys for being equally as patient as we slowly worked on this one – I know it’s not ideal to be sharing garden projects in September but from what I hear, there are lots of you who are still battling summer heat so perhaps it’s not such bad timing after all. 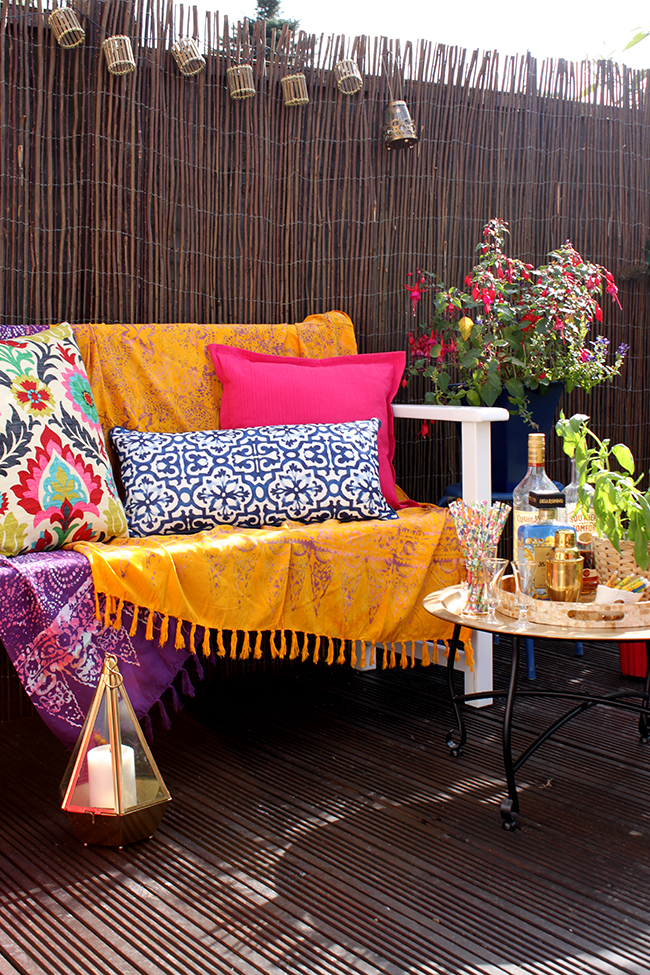 What do you think of the final reveal? Are you doing any last minute work in your own gardens? You know how much I love your take on things.

Disclaimer: Homebase have provided the garden furniture and some materials for our makeover free of charge for my review but of course, as always, all words and opinions are my very own. I only work with companies I really like and think you’ll like too! Thanks for supporting the businesses that support Swoon Worthy.