Dining Room Wall Inspiration: Or How to Hide The Telly

As I alluded to my last post, I have gone ahead and painted my dining room a deep grey.  I chose Dulux Night Jewels 3 which looks so beautifully rich, it has taken the room to a different level.  With the newly painted white doors and trim, it already looks a million times better in there.  However, I’m not done.  Oh were it that easy though, eh?

I have been drawing inspiration from gallery walls in order to play down the 42″ wall mounted television that resides on the largest wall in the room.  As I spoke about in this post, I can not deny we enjoy watching a bit of telly.  It is what it is.  And the telly serves a function in the room just as much as the table and chairs.  So it’s staying.  It’s just learning how to work around it.

Now all the ‘gallery style’ walls I have ever done have been very symmetrical.  I can’t help it, I’m drawn to symmetry and it appeals to the scientific/mathematical/organisational left side of my brain.  But I am forcing my left brain to play nicely this time.  And I’m forcing myself away from the perfect symmetry that it always yearns for.

The reason for this is twofold.  First, the television was not exactly centred on the wall.  Oops.  We centred it opposite the dining table and when W measured it out, he went from a set of built in shelves that resided in the alcoves which have since been removed.  Saying that, it’s not too far off – just a few inches – but it’s enough that a perfectly symmetrical wall won’t really work.  Secondly, there is a light switch on the right of the television which I’m going to have to work around.

This is what it looked like before we painted:

Added to that, I really love the way a gallery wall in mismatched frames looks like it’s built over time.

Here are some lovely images I have come across while deciding what will reside on that wall aside from the television. 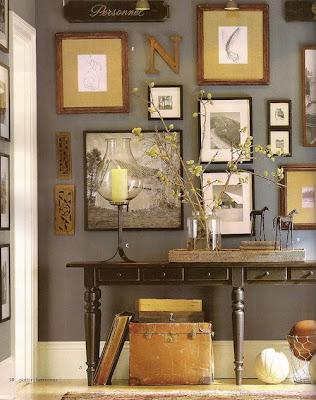 So I’m going to attempt to do an asymmetric collection of images and if I can get my hands on some baskets, incorporate those as well.  I already have a few ideas but the one thing I will desperately need?  FRAMES!  I have very few spare at the moment.  One of the problems of moving from a very small house (and small flat before that) to a much larger one…  the stuff you own only goes so far.  While the fabulous and inexpensive RIBBA frame from Ikea will probably make an appearance, I will likely be keeping an eye out for some older ones in thrift shops and the like.   I want the variation in colour and style to add texture to the wall.

There will also be a purchase of a sideboard to go underneath the television as well but I need to find one I love first.  Ebay better watch out.

While I don’t intend to spend loads of money on this room, I think with a few personal touches, it will really step it up a notch.

Can’t wait to share more with you in the coming weeks!

Have you had to deal with hiding a wall mounted television?  I’m open to more ideas, let me know in the comments…