Two Beautiful Green Kitchens You HAVE to See

So first off, this isn’t a post about my own kitchen. As much as I’d love to rethink the entire mini-makeover we’re doing to incorporate my latest obsession, it’s unlikely to happen at this point. We’ve got the new worktops, new sinks and taps going in next week which I’m incredibly excited about and after that, we’ll be looking at repairing some of the brickwork on the outside of the house before we can carry on with giving it a new coat of paint indoors. So things are starting and I’m not about to pull the brakes on decisions that have already been made.

However, I did come across two kitchens recently, both of which incorporate the beauty of green and you can say I’ve been swayed. White kitchens are pretty much de rigueur at the moment and having had one myself for the last few years, I can attest to the fact that they feel bright and clean and fresh. We’re adding some black to ours to give it a bit of drama and tie into the dining room redesign so that should keep my need for change ALL THE TIME at bay for some time. However. HOWEVER.

Have a look at this spectacular recent kitchen design from deVOL. I’m in awe of it’s beauty and drama. 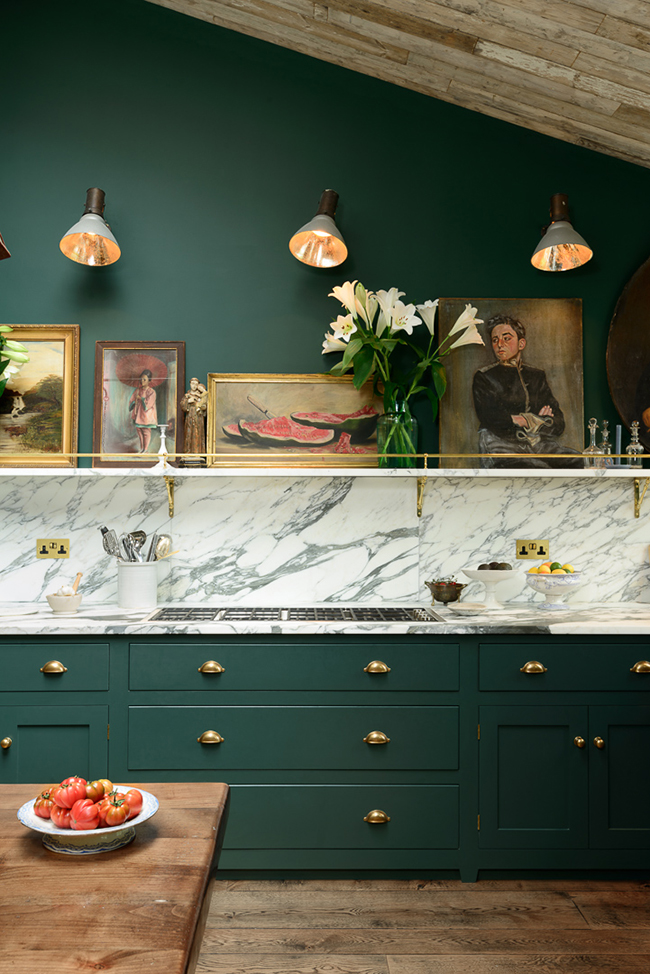 Okay, first off that marble is just killing me. Because any kitchen that incorporates quite that much marble is going to be a winner no matter what else the rest of the space looks like. But it’s that fabulous shade of emerald-meets-racing green the homeowners had specially mixed that plays off the movement in the natural materials that takes the whole thing to the next level. Or the next six levels really. 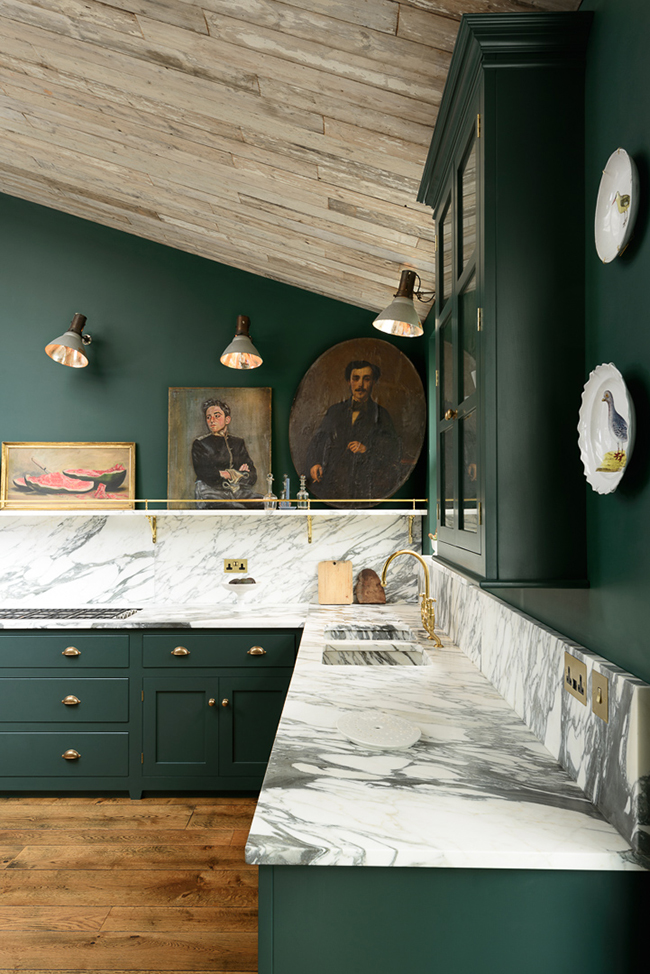 Of course, I also adore all the brass detailing. The shelving with brass railings give the space a luxe look and oil paintings give it an old world English charm. That juxtaposition between old and new KILLS ME. Of course, the unfinished wood ceiling and those beautiful floors create another interesting texture that adds so much warmth. 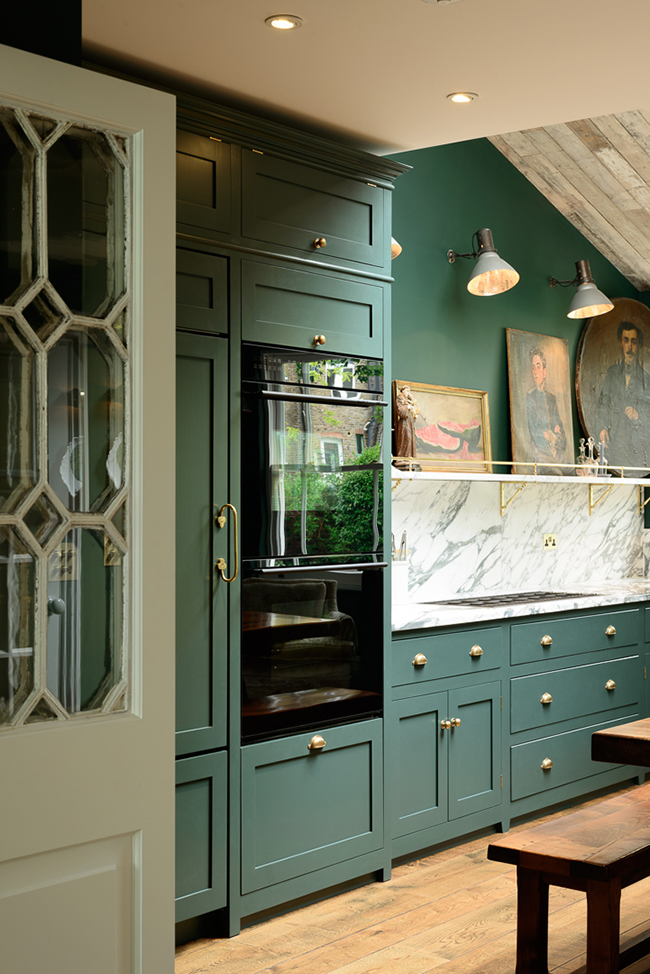 The second kitchen I wanted to share was the recent reveal by Gwen of The Makerista. Honestly, everything this woman touches is just pure understated beauty but she just knocked it out of the park with this one. 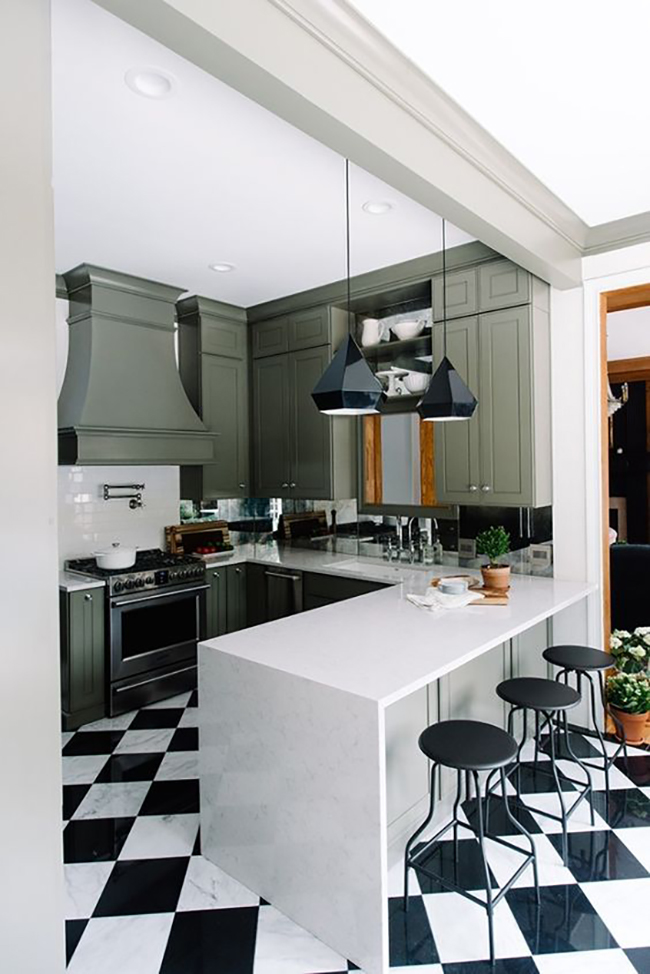 I have always loved olive green and that beautiful colour mixed with black and white make for such a striking composition. I love how she also incorporated a mirrored backsplash. I know in our home I’d never in a million years be able to keep that clean so I’m going to live vicariously through hers. 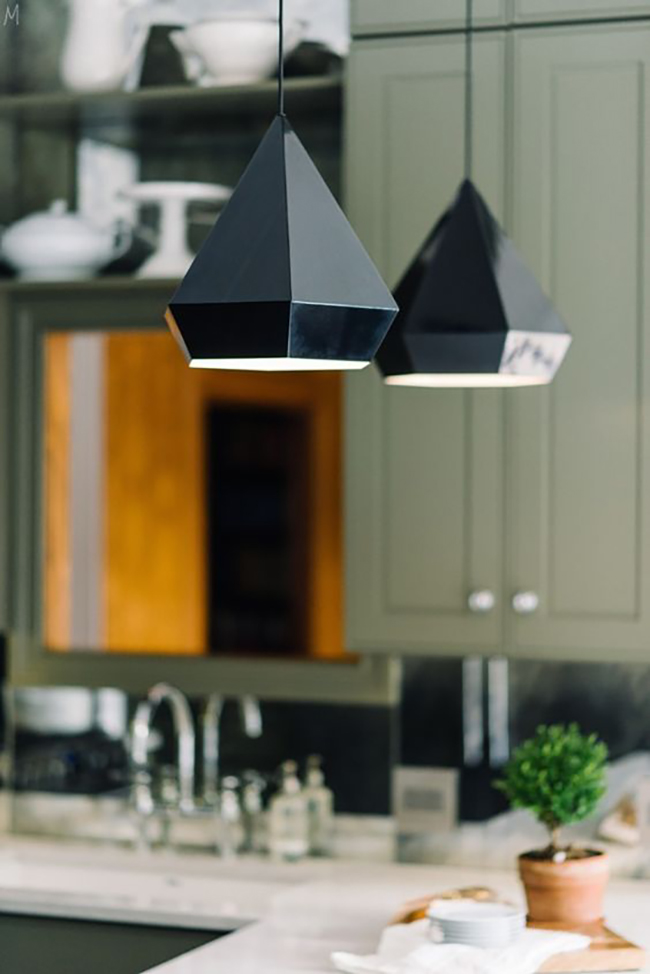 I also adore how she’s taken the more traditional features in her kitchen cabinets and played those against deliciously contemporary lighting and seating in black. And can we just take a moment to appreciate those tiles? 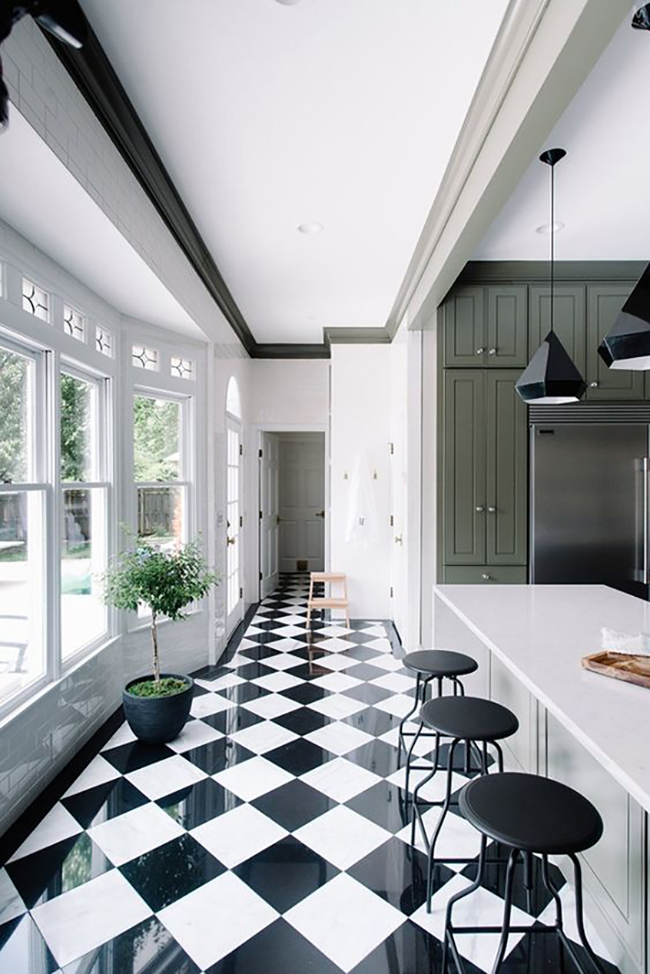 This image reminds me of the Greenbrier Hotel designed by Dorothy Draper. So so good. Do go and check out the full post on The Makerista to see all the before and afters to really appreciate just how much work has gone into this space.

Does seeing these images make you want to add a bit of green to your own kitchen? Are you as obsessed with green in your interiors as I am?